Blueberry Pie on the Fourth of July

Blueberry Pie on the Fourth of July 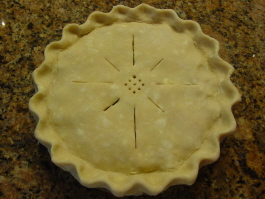 This was my contribution to the July 4th feast this year. I was asked to bring a dessert, with a request for something fruity. Blueberry pie seemed like a perfect choice. Simple in concept, but not always simple in execution, baking the perfect pie can be quite a challenge. This one could have used a little more lemon juice in the filling (or better yet, some rhubarb :-), but the crust turned out surprisingly well. And so, I offer my tip for keeping the edges from overbaking:

Instead of piecing together foil strips, I like to cut a doughnut shape. But rather than wrapping it from the top down, like most people do, I find that wrapping upward from underneath the lip of the pan does a better job of protecting the fluted edge from the intense heat rising off the heating element. This allows for lower placement in the oven, which gives better browning to the bottom crust. I can monitor how it's going by baking in a clear pyrex pie plate, and move the pie higher or lower as necessary. 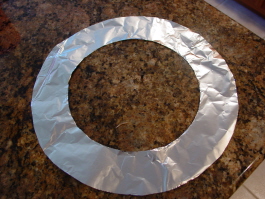 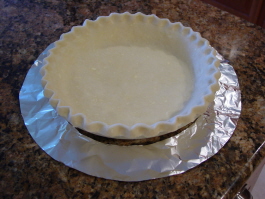 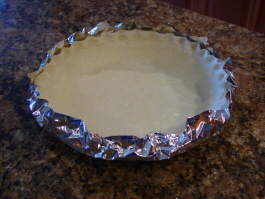 GMTA! I made the same pie this weekend with some fresh blueberries from Costco. Heavenly! I've been so focused on bread, it was nice to go back 'home' and bake a nice pastry item again. I've done the foil trick for many years, then ran across some pie-saver rings from Wilton. I passed on them, because they were a bit pricey. I then saw some at Walmart for about $7 (a pair) and snatched them up. They did the job, nicely, and it's nice to have that extra step of fussing with the foil eliminated. It's also nice for my pumpkin pies, because without fail, I always managed to dump an edge of the foil into the custard... I know, I know... gives it character... ; D

Love your fluted edges! For my double crust pies, I usually just do a fork tang pattern around it, because I'm usually in a hurry at that point. Once you have the bottom fluted so nicely, how do you apply and seal the top crust?

I want to go to there.

My grandmother was the best cook and baker I will ever know. Yet, even she always made cobblers, not pies, due to the difficulties with crust. As a result, I have never personally attempted a pie, assuming that it was beyond the capabilities of mere mortals. Yours appears so perfect that I just might have to expand my repertoire.

Beautiful work. Thank you for sharing.

that fluted edge is beautiful!  I love blueberry pie, and would have to say it's my favorite one of all.

I use the pampered chef pie plate, which is a deep dish, and have to say, I need to play around with the Betty Crocker recipe some more, to be able to have enough dough, to come up with nicer, thick crusts, like you have there.  I'm always struggling to make sure it's thin enough to go up high enough.  Maybe I should try doubling the recipe........can't wait to pick local blueberries.

Beautiful Blueberry Pie!  The crust looks perfect!  How do you join your top crust to your fluted bottom?  I do mine all at once.  That's my husband's favorite pie!

And yours is gorgeous, Debra!

Love the foil collar, great idea! Your steam vents are so perfect, did you use a template ? I'm fairly new to pie crust and intimidated because no one in my family ever made a good one. Right now I have the flakey and flavor down, but aesthetically not at all pleasing to look at. How do you get your fluting so perfect?

It always seems to me that I do not have enough dough to roll it out big enough so that I have enough to build the fluted edge. Is that a deep dish pie? If so I would love to have the recipe, if you wouldn't mind sharing. Thanks,

Mix flour, salt and sugar in food processor. Cut in butter with 5 1-second pulses, followed by Crisco with 4 more pulses. Transer to bowl, add water and toss with rubber spatula. Form dough into disc. Dust lightly with flour and wrap in plastic. Refrigerate 1 hour before rolling.

Nice pie, Debbie! Your fluted edges look perfect. Thanks for offering your tip on keeping the crust from browning too much. I bet everyone just hurried through the meal to get to your dessert. It looks so delicious.

Thanks so much for the props everyone! There's just something about pie, isn't there?

Keith, I used to have one of those metal pie crust shields. Not sure if that's the same as what you have or not, but it didn't work at all for me, because I really do start my pies on the bottom shelf. The shield didn't to anything to protect the edges from the bottom, which is why I went back to the foil. I can put the protection exactly where I need it :-)

Eric, I used to have a terrible time with crust, until a friend gave me a bushel and a half of apples one year. YIKES! Sink or swim... in apples. I got a LOT of practice rolling pie crust. Making one after another in succession is what helped me develop a feel for it. Even now, when I feel out of touch, I plan on making four, assembly-line style (that's the number to use up one whole Crisco stick and 3 sticks of butter). By the time you get to mixing or rolling the third one, you feel comfortable. And pie crust can be frozen at just about any stage, so it's a good thing to do ahead and have on hand.

Photojess, I use the crust recipe from Cooks Illustrated, and usually make two batches of the one-crust size, instead of one batch of the two-crust. I usually end up with a fair amount of scraps, but I'd much rather trim than patch. I'll try and get the recipe posted some time this week, although, if you want to read the article that goes with it, you can find it in the September 1994 issue.

Sylvia, I'm sure I join them the same way you do. The top three photos were taken of this pie, but the bottom three of the foil crust shield came from another baking session---probably a pumpkin or pecan pie at Thanksgiving. (I was feeling lazy, and didn't want to get out the camera one more time when I knew I had these photos on my computer.) I should have mentioned that---sorry, everyone, for the confusion.

Paddyscake, no template---just a wooden skewer and a sharp paring knife. I got the idea for the docking one day, when I was trying to mark the center with a toothpick (so I would have a point of refernce for making the slits even and centered). Well, my first mark wasn't well centered, or invisible for that matter. I had to add another mark... and then another. The effect was interesting, so I widened them with a larger scewer, and built my design around them. And I've been doing it ever since :-)

I can also recommend growing your own blueberrys. I've got six blueberry bushes on the north side of Atlanta and I'll get about five gallons of berries this year. I would get more, but there are large robins and mockingbirds enjoying part of my crop.

They are very easy to grow. Drought tolerant and very few bugs bother them.

Has anyone had any luck growing blueberries in the West's alkaline soils?

I have three bushes outside my front door that I'm not crazy about, but blueberry bushes might make an attractive replacement. The only problem is that soils close to foundations, tend to be alkaline, so I might have the same issues as Patricia. Have you grown them next to your house? Will the deer ravage them? (That's my biggest problem.)

alot of land, different soils and climates. I'm not sure what we have in the Willamette Valley here in OR, but our berries do extremely well. My husband says that the fir and horse manure mulch he spread last year has made them better than ever. We have blueberries, raspberries and marionberries. Thank god they don't all come on at once!

That pie looks beautiful.  Just one question.  What exactly is crisco?  I don't know that we get it in Australia.  Any suggestions for the closest approximation?  I would love to try this with Rhubarb as I have it growing in my garden.

Wow, good thing I decided to look, I almost missed the new activity in this thread too. Reminds me, it's time to start looking for apples to make apple pies :-)

I doubt the saturated form is any better for you than the trans-fat form, so don't be fooled into thinking it's actually healthy. Pie is just an occasional treat in this house and pie crust is the only thing I ever use it for, because the lard that's available around here tastes awful. I did recently find a sausage and meat store that sells good leaf lard. Unfortunately it only comes in something like 6-pound buckets. Even so, it's pretty cheap, so I think I'll give it a try next time I make pie dough.

I love rhubarb pie---It's my favorite, mixed with either strawberries or blueberries.

It's a vegetable solid like lard which was once used in the olden days.

Your pie looks beautiful.  This is one of my all time favorites.  I make pies and never have problems with the crust.  I add cinnamon, a little butter, lemon zest, sugar and a little flour to my pie filling. I mix both solid shortening or lard (lard makes a flakier crust) and butter in my crust.  I will try to your suggestion with the foil, it sounds like a good idea.

Blueberries are so expensive in Switzerland that it usually costs me about $30 to make a pie when we can get fresh blueberries.