This is a very tasty bread with a light crumb and nice crunch from the soaked seeds. I would make it again. In spite of the German rye sourdough incorporated in it, which was very sour tasting, I don't really taste any sour. It is a lovely, soft sandwich-type bread with only a hint of rye flavor. I can't imagine anyone, including children, disliking it. There are a number of errors in the recipe. I have pointed those out below, and indicated my experience when making this recipe in case someone else wants to try it. 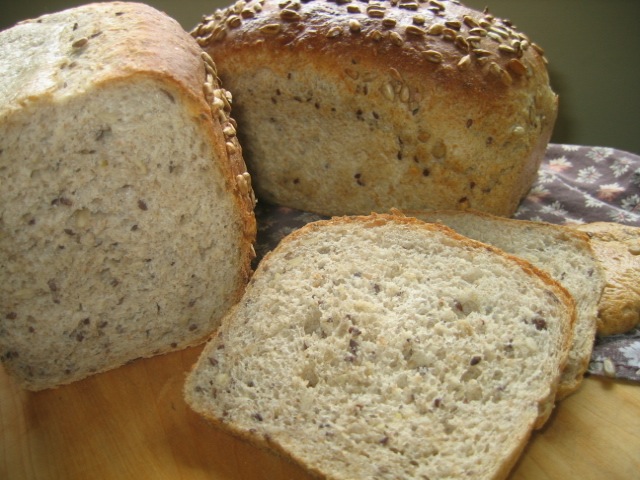 This sunflower-crusted rye gets great chew from the flax, sesame, and sunflower seeds inside. Flax isn't familiar to most people, but it is one of my favorite bread-baking ingredients. The glossy, tiny golden brown seeds have a wonderful sweet nuttiness. Until I saw this bread at Tobias Maurer's bakery in Stuttgart, I wouldn't have believed it was possible to put so many seeds into one loaf. I had seen how an abundance of seeds can draw moisture from dough, drying out the bread as it bakes. Tobias showed me how an overnight soak softens the seeds, turning them into a gelatinous mass that does the opposite, moistening the dough as it bakes (Local Breads, p. 282).

Soak seeds, except topping, in 175 g water and make German rye sourdough 12 to 24 hours before mixing dough. (I did not find that these formed a gelatinous mass after soaking overnight, but whatever they formed seemed to work perfectly.)

On baking day: Pour remaining 350 g water in mixer bowl and stir in yeast, soaked seeds, bread flour, rye flour, salt, and German rye sourdough. Using the dough hook, knead the dough on speed 2 for 8 minutes, let rest in bowl for 10 minutes, resume kneading for another 8 minutes. I had to incorporate a substantial amount of extra bread flour during the final kneading time owing perhaps to errors in the amount of water* specified in Leader's recipe, which is different in the ingredients column than in the text.

Transfer the dough to a lightly oiled container with a lid and let rise until double, about 2 hours.

Divide the dough in half, shape, and place in two 8 1/2 x 4 1/2 inch pans. (I got two, 1-1/2 pound loaves out of the recipe, but Leader indicates there would be two 17 ounce loaves.) Mist the loaves with water or brush with egg wash and sprinkle with remaining sunflower seeds. Cover loosely and let proof for about an hour until nearly double (mine were doming the pans).

Preheat the oven to 400º twenty minutes before baking and place the oven rack at the lower middle position.

Bake the loaves for about 35 minutes. (I got a lot of oven spring.)

German rye-sourdough: mix 50 g liquid levain, 100 g water, and 75 g rye flour. Let stand at room temperature for 12 to 24 hours. It is ready when it has doubled and tastes very tangy. It is alright to use if it has deflated (this was the case with me). This makes more sourdough than you need. According to the recipe, you can store the unused portion in the fridge until you are ready to use it again.

Thanks, Floyd. I'm glad at least something I made today came out well. It helps obviate my SD croissant experience.

Your description is very helpful. You make it much more appealing than it was from reading the recipe. I will have to give this one a try.

I do think, David, that you would enjoy this bread. I just finished eating a slice that I toasted; it had the most wonderful chew, which, I think, was from the flax seeds. And, the sunflower seed topping although scant is not just an ornamental, but really adds to the nutty flavor of the bread whether toasted or not. (I egg-washed one of the loaves so the seeds would adhere better, but they're staying put on the loaf that just got sprayed with water too.)

boy, you've been busy.  yes, your recipe will go into my "to do" list one of these days!

This bread was a pretty easy bake. I highly recommend it.

Pamela, Very nice looking loaves! I like the petite loaf shapes..just right for this hardy bread...what size are your loaf pans?  Oops!  It's been a very long day..just saw your pan size.

This really was a delicious bread. I gave one loaf away--actually I traded it for a couple of wild ducks--and we've eaten better than half of the 2nd loaf. I made some SF SD today, so I guess will survive until I whip something else up.

From the photos, this looks like a great, versatile bread! Well done!

I think flax and rye go great together, so this loaf is probably right up my taste-alley. I bet the toasted sunflower seeds on the top add lots of flavour too! I have "Local Breads" on my shelf, but I've never baked much from it, I'm afraid. What are your favourite loaves from that book, Pamela?

I'd love to learn to grind my own flour someday...

Thanks, Hans. I've only made three loaves out of Local Breads: Meteils au Bleu, which were fantastic, the Sourdough Croissants, which were awful, and this bread. I have a number of others I want to try but haven't done so yet.

I really enjoyed the seeds in this bread. Grinding flour is pretty easy as long as you have the right mill. I have a Nutrimill and I think it does a great job.

I think most of the loaves in Leader's book are good, but you just have to be careful to look out for errors. I think most are probably spotable.

I have my rye sour noshing on Giusto's organic whole rye. I'm going to make this bread this weekend. I really hadn't seriously considered it until I read your account. It really sounds delicious.

Thanks for pointing out the discrepancy in the water amount in the recipe. But you just mentioned the little error, not the big one - the listed 22 (Yes, twenty-two) cups of water in the "Volume" column (pg. 283). As one of my old public health professors would have said, "That editor was permanently out to lunch!"

If I understand you, you think the 300 gms of water listed in the "Metric Weight" column is most likely correct. That's the number that would yield a 60% hydration dough, which is the Baker's Percentage Leader specifies.

BTW, for both you and hansjoakim, Leader's Polish Cottage Rye is a wonderful bread. It's kind of like a San Francisco Sourdough made with rye sour. Very yummy. It goes equally well with almost any sandwich filling I can imagine. Excellent with herring, too. It's one of my favorite breads.

Hi David. Yes, I think "22 cups" of water is probably an error :>) (no doubt the editor was somewhere other than proof reading the book). But I think that's not the only water error. If you look at the instructions they indicate 175 g water for the seed soaker and 350 g for the final dough. So that means the water should be 525 g instead of 300 g. Based on my experience of making the bread I think that 525 g was way too much water because I had to add quite a bit of bread flour to get the final dough to come together, so I would reduce the water to say 475 g or less; maybe 300 g is correct and the amount of 525 g written in the instructions is in error. Leader said I would get two 17 oz. loaves from the batch, but I got two 24 oz. loaves. If I add all the ingredients up using only 300 g water, I get a final weight of 34 oz. which would equal two 17 oz. loaves. I assume my extra weight was the extra flour I had to incorporate in the final dough. If you look at the recipe for his Alpine Baguettes, which is similar, you will see 525 g water.

But don't be dissuaded from making this recipe just because the water amount is incorrect; it is an easy error to fix.

Your Polish Cottage Rye looks delicious. It is definitely on my list of ryes-to-make!

Are you saying that, to get the correct amount of water, you should add just 125 gms of water to the flour, soaker, salt, etc.? Or are you saying the 300 gms in the table (as opposed to the text) is correct?

My suggestion is that you use less water. It doesn't really matter whether you pull it from the soaker or the final dough. No matter which you choose, the bread will come out fine. At least it did for me.

It's clear that the text with the wrong amounts was just cut and pasted from the preceding formula. I have found other pairs of formulas in Leader's book with the same kind of nonsense.

My sour is fat and happy and my seeds are soaking. I'm making this bread tomorrow.

A friend of mine made the bread and said she used all 525 g of water. She attributed it to the type of flour she used. Remember I ground my own rye. Anyway, good luck and please let me know how it comes out.

That's good information about how the text and tables were constructed in Leader's book. Thanks for passing that along to all of us.

Well, my dough is fermenting, but it was a struggle to mix it.

I started out on the assumption that the dough mix should include 125 gms of water, per our discussion above. Well, that doesn't seem to be correct either. With that amount of water, the dough was way dry. It wouldn't even come together. So, I added water until it seemed like a reasonable consistency. I didn't measure the added water, but I'd estimate it totalled about 1/4 to 1/3 cup. At the end of machine mixing, the dough cleared the sides of the bowl but stuck to the bottom a fair amount. I kneaded on the board a bit, and the dough was smooth and tacky - still not a real wet dough for a 40% rye. We'll see how it turns out.

I think a novice baker who had little experience working with dough would have just given up or ended up with either a brick or slop. What a shame. "Local Breads" has so many wonderful breads. The editing errors and Leader's and the publisher's unresponsiveness to pleas for a corrected edition or even an errata sheet is unforgivable.

I hope it comes out OK for you.

I probably ended up using too little water - Probably less than 200 gms (instead of 300 gms.)

On the other hand - just to add to the confusion - my dough weight came out to 35.5 oz. Pretty darn close to the total dough weight Leader says I should have.

My loaves are cooling now. They had very little oven spring. I anticipate they will turn out very dense. Otherwise, they look great.

I'm hoping for the best for your loaves! Toast is always a good remedy for everything.

I just brought home a half-flat of gorgeous berries. I'm making jam tonight. I bet it will be great on toasted dreikornbrot for breakfast.

I've love to see the jam & the bread.

Here you are Pamela: 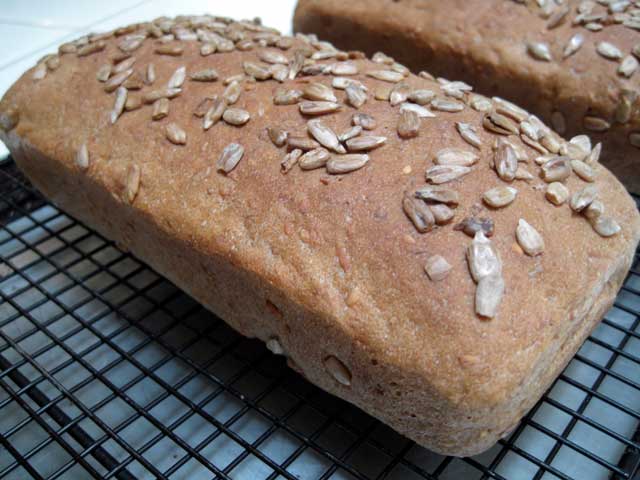 Note the ærodynamic low profile, a.k.a. not much oven spring. 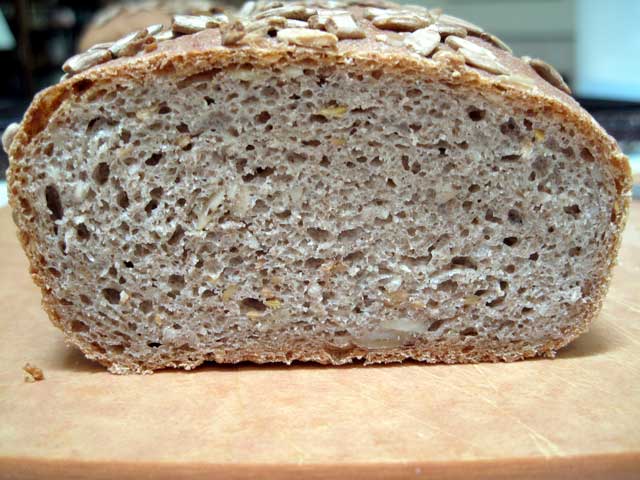 The crumb doesn't look so bad. The bread is ... not fluffy. The flavor is very nice - the rye and flax seeds really come through. The crust is crunchy.

Tonight, we will have sandwiches of chicken breast baked with herbs de provence. The jam on toast will happen tomorrow, but, to hold you until then: 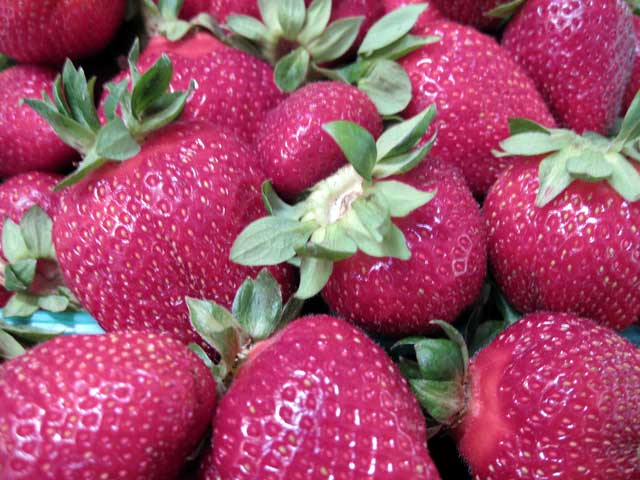 Actually, both my wife and I rather like the bread. If I didn't know it wasn't "right," I would have no problem with it.

Next time it will have more volume. I'm glad you are enjoying the flavor.