Two loaves and a tart

Two loaves and a tart

I made two loaves this week: The first was a take on the "Pain au levain with whole wheat flour" from Hamelman's book. Although I've had the book on my shelf for just over a year, I hadn't tried any of his pain au levains before. The time was overripe (like a "bubbly, collapsed poolish"-overripe). To make things a bit more interesting, I replaced half of the bread flour with spelt, and added a liberal amount of wheat bran to the recipe. I guess this detracted a bit from the potential loaf volume, but added to its nutritional value and the flavour. 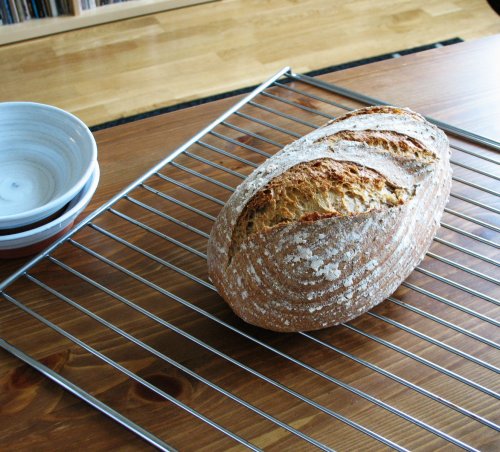 Cutting loaves successfully is something of the hardest of the whole bread baking process if you ask me... Since this is a pretty light loaf (only 20% whole wheat and 5% rye), I opted for the classic baguette cut. Not very symmetrical or anything, but a nice bloom on the first cut at least. "The first cut is the deepest", that's a song, isn't it? 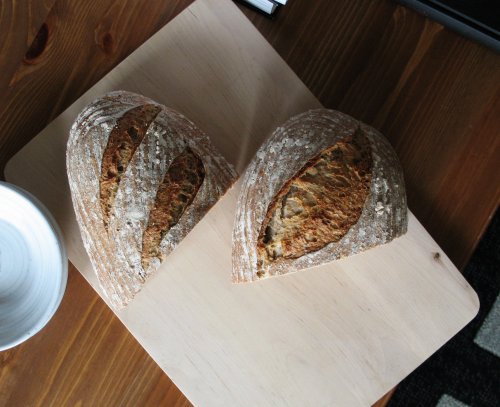 Below is a photo of the crumb - pretty homogeneous crumb with no large pockets, but that's usually the way loaves turn out at my place. To be honest, I prefer a more even crumb too. I was very happy with the profile of the loaf, especially since there's quite a bit of spelt in there. The photo doesn't show it, but the crumb is also specked with wheat bran. Yum! 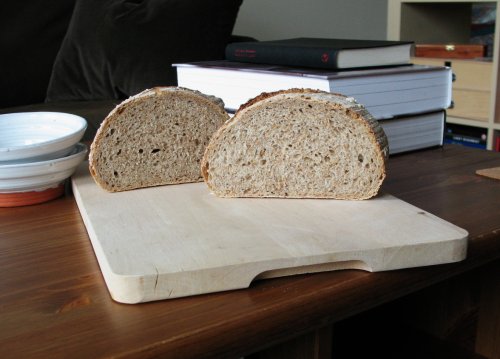 I really enjoyed making this pain au levain from "Bread", and I was amazed by how quickly it all came together. That's what you get from working mainly with rye doughs, I guess :-)

The flavour is very clean, wholesome wheat and the crust has a brilliant crunch to it. The crumb is also very soft, and this loaf goes well with both fish, meat and cheese.

The second loaf I made was a Leinsamenbrot - a rye loaf stuffed with flax seed. This is approximately 66% rye, so it's a pretty filling bread. I'm getting more and more into making hearty rye loaves with my firm white starter (50% hydration), and I wonder how much further the rye content can be increased without getting those large holes from the dreaded starch attack during baking. For this loaf, approx. 15% of the total flour comes from the starter, the final dough is quite high in hydration (77-78% I guess), and there's only a small speck of yeast in it (about 0.3% fresh yeast). I let it bulk ferment for roughly 2 hours and final proof 1hr 15 mins. I've found this procedure to result in nice, open crumbs and a pleasant rye flavour. If you're after a really sour rye, you'll probably have to opt for a rye starter as well! 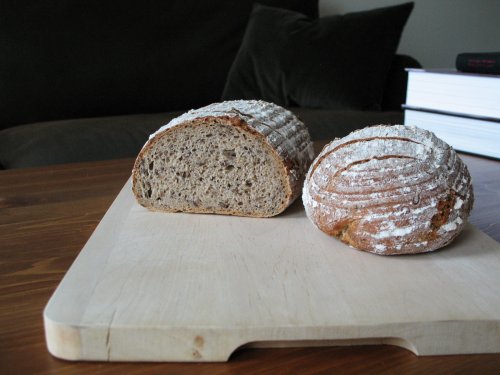 I also promised desert! I found some tempting pears at the store the other day, and decided to have a go at a pear tart. I used a sweet tart dough (pâte sucrée), a frangipane filling and sprinkled the poached pears with cinnamon and sugar. Some chopped almonds and powdered sugar in between the pears. I had no idea how much frangipane to put in the tart - I was hungry and running a bit late, so I think I scooped a bit much into it, but fortunately it didn't spill over the edge... 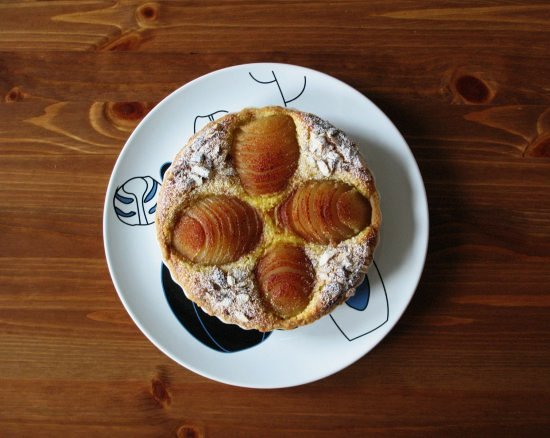 Really nice, Hans! I love frangipane and yours looks terrific. Your hearty rye loaf with flax seeds looks wonderful too. That's a pretty high percentage of rye and yet your loaf looks flawless.

Thank you for your kind words!

For the past few months, I've used almost exclusively organic stoneground rye flour from a local mill. The first few loaves I made from this flour were pretty much all over the place: Pancakes, gloppy monsters, rustic (and not-so-rustic) looking bursting loaves... Sooner or later, one figures out how to work with the specific kind of flour, and then it's... uhm... smooth sailing, I guess. Being consistent in choice of flour and being respectful of the dough (I've never sung for it or told it bedtime stories during first proof, you'll have to draw the line somewhere) are the two keys for me in my kitchen!

I really enjoy "Bread". Your take made a nice sandwich loaf. The Tart is beautiful. You are very creative and unafraid of new things. Thank you for sharing that.

Hans these are lovely breads so wholesome very nice!...the tart is gorgeous!  You poached your pears first!  Did you use any special flavor for the poaching liquid!  I poached pears in wine once...they were very nice!  I have been very much in the sweet baking mood with summer and fresh fruits abound approaching and your tart is very tempting!

From the preferences you describe, you would really enjoy Hamelman's 5-grain levain, as well as his sourdough seed bread. Both are very tasty, hearty and nutritious.

Thanks so much Eric, Sylvia and David!

Sylvia: I used about 1/2 of a lemon cut into wedges in the poaching syrup. It added a nice, fruity tang to the poached pears! I'm keeping the rest of the poaching syrup in the fridge for now - maybe I could use it as a simple cake syrup later? And yes, I've been in the sweet baking corner as well lately! It's oncoming spring perhaps, and a better selection of fresh fruits and berries at the store?

David: Thanks for the recommendations! I've made the rye version of his 5-grain before, and I love that one. Since I really enjoyed his WW pain au levain, I'm putting those levain recommandations on the top of my list. Thanks again :)