Hi, I am excited to say I am planning on building some sort of outdoor wood fired oven this summer. I live in northern New Mexico and there are many Horno ovens around here ( I am pretty sure they are the traditional native american wood fired oven, at least around here ). I am wondering if anyone has experience with these and if it will work as well as a fire brick/cement oven. Any input would be great.

Thanks for the link. San Luis is just up the road from me. I think I am inspired to build a traditional Horno. I have a friend that has the forms to build one.

I live in Ohio and am planning to buy or build one myself. I have no idea where to get one in my area and could likely not afford to have one sent to me, premade or otherwise. I'm hoping to find a "kit" or instructions somewhere.

DrPr, head on over to Amazon and check out these two books:

The first will get you started on a masonry oven, and the second on an earth (or clay) oven.

Or, you can purchase kits from makers such as fornobravo.com.

Each has it's own pros and cons, so which you pick depends a lot on how you plan to use it, available space, etc.

are significantly cheaper and easier to build.  they are also less permanent, if that is an issue.

i couldn't afford a masonry oven, and have virtually no experience with masonry, so i built a mud oven inspired by kiko denzer's book "build your own earth oven:" http://www.intabas.com/kikodenzer.html

here's a link to my blog posts about building it: http://www.thefreshloaf.com/blog/shimpiphany

i built it almost entirely by myself (something i would not recommend), and spent about $170 or so in materials.  it cooks great, everything from pizza to bread, and holds temp enough for me to cook pizzas, 4-10 loaves of bread, roasted veggies and meats, etc. in one firing.  if i use a live fire i've cooked as many as 10 pizzas.

that said, it is still not as efficient or pretty as a masonry oven.  climbhi, above, has a gorgeous masonry oven and you should search on this forum to see pics of it yourself.

but the mud oven is perfect for me. 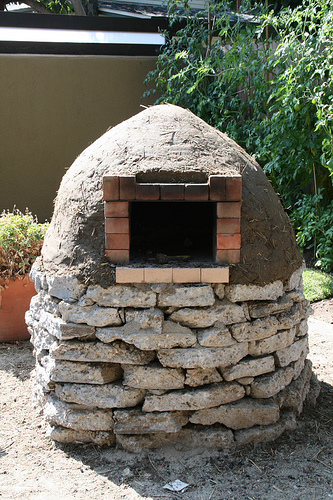 I love your oven! I'd like mine to look similar.

I am so impressed with your creation!!!  And all within a nice budget!!

I do not give a blicketty-blank about looks.  For those people who have several grand to blow, so be it.   I perfectly content with recycling and making due with what you can find.   And with that said, I think you did a fine job and I think it looks GREAT!!!

I am seriously thinking of making one like yours.

We have lots of buildings that are being taken down and there are stacks and stacks of concrete blocks/rocks there for the taking.  Just trying to get my mind around what is next.

if you want to talk about how i did it.

good luck with your oven!

I also built an Earh oven from Kiko Denzers book. Four more comments on them. The first is that, unless you put a coating of mortar over the exterior of the oven, you will have to build a shelter with a roof for it to protect it from rain and snow.  The second is, and i built mine from Kiko's first edition so it may have been addressed in subsequent editions, do not mix the clay, sand and water by hand or with the tarp method. Rent a small concrete mixer. The mixture has to be relatively dry or it will sag when you put it on so you need to work with minimal water ... thus the mixer. Next, do not use straw in the insulating layer ... use Vermiculite (flaked mica). Finally, in some locations, getting a cheap load of clay can be a challenge (DO NOT pay for potters clay). It is often stocked by landscapers for baseball fields.

Once you have the base and the hearth built, the oven can be constructed by two people in a day. It works as well as you make it thick.

i used the tarp method and straw from a bale i got for free, and the whole thing works great.  a cement mixer would have worked well too but i didn't want to incur the cost.  i agree that the there are better insulation materials than straw, but perlite is probably better than vermiculite, as the non-industrial version sold for gardening won't hold up as well, and the industrial version is kind of hard to deal with and potentially hazardous.   the clay the above poster is talking about can also be bought at masrony stores or home-improvement stores as "fire clay," and you don't need a ton of it.  the thing you will need a ton of tho is concrete sand.

to compensate for the straw i made my insulation layer about 1-2 inches thicker than called for, depending on the location.

any way you do it, you'll have fun and successful.  the key is to just do it and not limit yourself - if you think it will be easier to use a mixer, go for it.  or just mix with your feet.  either way gets it done and you have a wood fired oven!

THanks for the links and the idea.  I have been thinking that I need something not "permanent" for the time being, not to mention something that would cost less.

I decided to try Denzer's recommendation to try and use no newly purchased materials. Since I have an older house that had "creative" garden edging when we bought it, I had not only plenty of flagstone, but enough firebrick for the hearth floor as well as an arched door. I scavenged sand and gravel from some long completed construction sites, and dredged a little more sand from a nearby creek. With a 42" hole needed to get the frost line, I needed quite a bit of fill material, but had leftover concrete from a sidewalk I had replaced with paver bricks (more former garden edging). I had enough clay from the hole to build the entire oven.

Total cost was...$0, absolutely nothing, except for many many man hours of labor, as my wife and two teenagers all agreed it was "Dad's project".

First pizza test was last night. Not bad, but the crust wasn't as crisp as I expected. After rereading Part of Denzer's book, I realized I had probably used too much fuel, and had prevented the oven from getting as hot as it could. Tonight,much better results. Nice, thin, crispy crust. Very tasty, and I'm so happy with the result that we're having people over for Labor Day and having a non-traditional Labor Day pizza party!

Although Delzer's book is excellent, one thing I didn't figure out until after almost completely finishing my oven was that I had not used enough sand in my cob mixture, so had some hefty cracks to fill. No disaster, but some extra work that could have been avoided.

I haven't done any final "waterproof" outer layer, a necessity here in the Chicago area. Any recommendations? A roof is not an option, per my spouse. I"m thinking of trying the lime plaster method. Does anyone have any experienceand/or tips in this area?

I LOVE my oven. I can't wait to start breadbaking in it. I really built it for bread, the pizza aspect is just a fringe benefit.