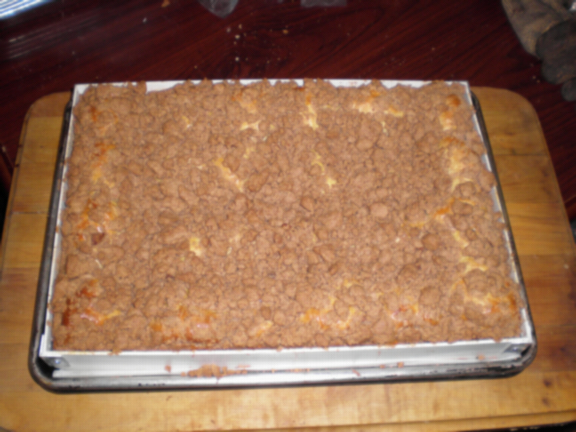 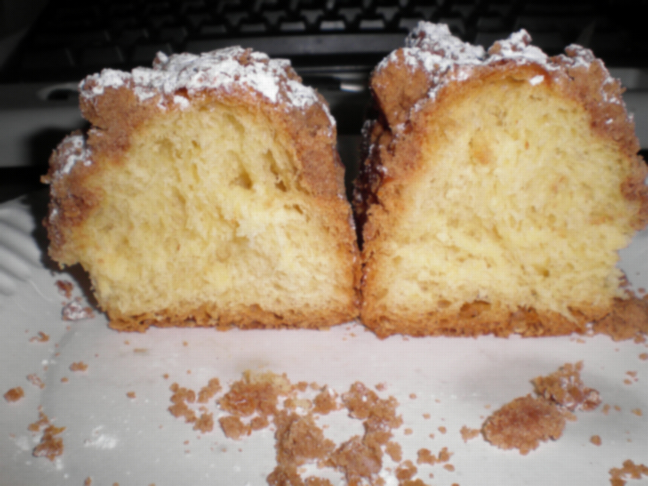 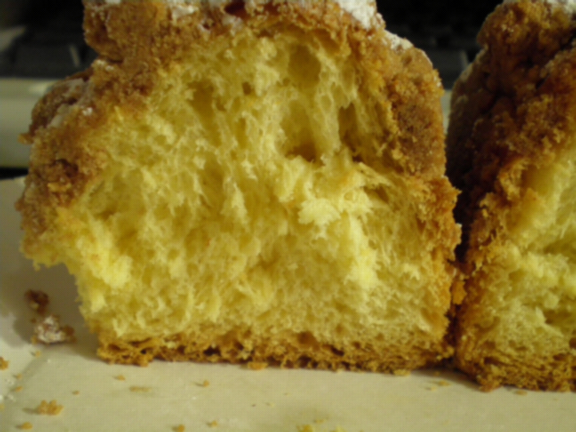 A new Cam is one piese of new equipment the other is the pan extender seen in the first pic. I found an on line store with prices to good to be true. the half sheet trays were only 3.69 each 4.75 each including shipping. the catch is it is a supply house and you have to buy 12 at least but the prices are crazy. the lowest i have ever seen you have to look at this.

Nice to hear from you!

I've never heard of "New York Crumb Buns," but they sure look good. I can hear them calling for a cup of fresh, really good coffee.

there is your standerd crum cake which is a batter type and there is this type which is a yeast dough richer than doughnuts but not quite a babka the piece in the pic was scaled 2 oz a little to big but i like them that way. they should be 1.5 oz not including the crumbs. ill post the formula later after i get some sleep.

I have not made crumb buns since my first bakery job that I had while I was attending culinary school..I cannot recall if we used an extender to make the crumb buns at that bakery, or not..It seems to me that we did..I would love to have two of the half sheet pan sized extenders..You are correct in that the prices quoted for extenders on the web site that you provided the link for are VERY good prices indeed!!..Most places are selling the extenders for double those prices..

We used what we called a sweet dough recipe, which was a yeasted dough that was similar to a danish dough..It differed from the shop's danish dough in that it had half the amount of eggs, half the amount of orange icing fruit, 3/4's of the amount of milk powder, and 1/3 the amount of vanilla flavoring as did the danish dough..The butter in the danish dough was replaced with Sweetex high-ratio icing shortening..It also contained a dough conditioner, and 2/3's of the danish dough's patent flour was replaced with equal amounts of cake flour, and pastry flour..All-in-all, the sweet dough was a less rich dough that was used to make the bulk of the shop's German-oriented buns..Its tenderness came primarily from the lower protein / gluten content of the pastry and cake flours..In this shop, in the early 1980's, using the word pastry to describe an ordinary "bun" was considered to "be putting on airs"..Everything we made were called buns..

Some of the things that I recall making with this sweet dough are crumb cakes, cheese cakes, cheese buns, fruit buns, bienenstick, and, of course, crumb buns..

I still have the heavily-stained 3 x 5 index cards containing the written recipes for the dough, the butter crumbs, and the custard filling that we spread in between the two layers of the bienenstick..

Thanks for reminding me of those times!!..

These Crum Buns look so Delightful...I bet my Grandkids would love them..looking forward to your recipe!

If you make then be sure to sit the grand kids down or you will have crumbs all over the house :)

Cream the sugar and fats, salt, cinnamon, and honey till very light and fluffy then add the flour
you should get a paste that is not to dry but not to wet. it will hold its shape when a lump is squesed in your hand.  you should be able to break the paste into small marble size lumbs or you can rub the paste through a cooling screen that has 1/4 to 1/2 inch holes. the past should not be so dry that it crumbles into a corse sandy looking powder. if it comes out to dry do not add water to soften it use oil (water will activate the gluten you do not want that.

Butter will make a very crisp hard topping when baked while shortening will make a soft tender topping.

OR 1 pound 8 ounce of a bread flour with 10.5 percent proten

the dough will be ready when it comes clean from the bowel and in free of the bottom as well. you should hear the dough slapping around the bowl and don't rush it will take some time 20 minutes or more.

let rise once and shape proof and bake

crumb buns should be 1 and 1/2 oz each i made big ones in the pic 2 oz each but a little to big .  make them into a rectangle shape and in a 12 X 18 halve sheet pan place them 4 by 6 (24 to a tray) alow them 1/2 proof untill thay are touching on all sides egg wash and top with the crumb topping and let them finish proof to a little more than 3/4

bake at 350 till done.  this dough can be used for cinnamon buns round filled buns cinnamon stick buns just about any sweet yeast shape.

Thanks for the formula!

Is this the same dough you gave me for cheese pockets?  See this topic:

It looks pretty much the same to me.

there are some small but important diferences
the fat in the dough has been reduced by 4 oz in the bun dough
there is also less eggs also to alow a stronger dough.  the reduction in fat and eggs means less lubracation for the gluten.

also the flour is a 3 pound bread to 1 pound cake.  4 ounce has been removed to compensate for the reduction of liqueds (less eggs)

while this does not seem like a major change the result is a stronger dough that will support the heavy crumb topping without falling down and turning into crumb topped matzo.  it also will not spread as much but rise stright up in the oven.

if you remember  the coffee cake dough needed to be mixxed with a paddle and was very soft.  this will mix with the hook and will clean the mixer.

ps: this dough could be used for a high quality cinamon raisian bread the other dough would  fall down as there would not be enough gluten structor to hold its self up

Wow! Lots of information to digest.

I really appreciate your detailing the effects of each change in the ingredients on the dough performance. You've provided a window on how a "real" baker thinks about a formula.

I've a ton to learn!

you can better see the differences

( the reason thouse meringue cookies get so hard) . the product will be richer but

yolks and half whole eggs

flavor extracts or spice to taste

the lower gluten of the flour blend will result in a chewy finish but still be very tender
i hope seeing these side by side will show how just small changes in a formula will make a big change in the end result.
if you realy want to see how small changes affect the finish i will post a formula for a regular quality cinnamon raisian bread for you to compair

Got my teaching hat on

Actually, I had recalculated your formula for 8 oz of water. Not to worry, I can handle the math.

In any case, the crumb bun formula has gone on my "to bake list." I'll probably do cinnamon rolls though.

You've inspired me again. I have cheese pockets in the oven right now, made with the recipe I used before - your formula for the coffee cake dough and recipe for the filling I had used before and liked (hoop cheese, sour cream). I'll post pictures later tonight, most likely.

there are meny things i use the bun dough for.  my three favs are the crumb cinnamon and round filled buns which look like a bialy but the center is filled with a fruit pie filling or jam or almond filling or pastry cream or... well you get the idea

I am curious as to your cheese filling recipe, if you would care to share it..Do yo use Farmer's Cheese to make the filling??..For some reason I cannot find the index card for the cheese filling that we used in the first bakery that I worked in back in 1984..There is something about the texture of Farmer's Cheese that gives a bun an Old World feeling when one bites into it..

Thanks again for this thread, as it is bringing back a lot of memories, very good ones!!..I really want to make up a batch of sweet dough so I can revisit those old German-influenced desserts that I have not made in 15-20 years..There is something to be said, and admired, about the more simple desserts that the average Blue Collar immigrant from Europe ate while working everyday and raising a family here in the United States..Nowadays, it is all about the fancy, very complicated desserts that one only found in high class patisseries in Paris, London, Rome, Vienna, etc..

i wonder where you are and where you worked.  i was in the baking profession for more than 25 years when health issues forced my retisment.

i still have contacts in the biz and connections with supply houses.

that bringes me to the cheese filling.  the filling i make uses somthing called bakers cheese a very dry cheese close to farmers cheese but not quite.  it is twice as dry and will hold a lot of liqued and must be enriched with fat since it is fat free

it is only currently being manufactured by hanes a sub company of Franklin Foods' it is only available in 10 or 30 pound boses and is about 2.00 per pound

the 10 pounder is hard to find since moust supply house's only carry the 30.  the only good thing is if you have a chest frezer that can hold 0 to -5 like mine does it can be frozen for 2 years with no loss of quility.

in the fridg you have only about 37 days from the manufactur date and it will go moldy fast after that.

See my recent blog entry on Cheese Pockets for a recipe for cheese filling for pastries. I used hoop cheese. This is similar to farmers' cheese but farmers' cheese has more fat, I think.

Here's a recipe for home made farmers' cheese. I can't vouch for it.

Here is a link to the company that makes the hoop cheese and farmers' cheese I buy at my local Whole Foods Mkt.:

"How does Farmer Cheese differ from Hoop Cheese?

Farmer Cheese is made from lowfat milk (1.5% milkfat) and has salt added to the regular variety. Hoop Cheese is typically made from skim milk and has no salt added."

My mother did not make pastries, but she used hoop cheese (farmers' cheese when she couldn't get hoop cheese) for blintzes and for cheese cakes.