I read TFL often and post infrequently, but I thought I'd upload a quick picture of my latest bread.  It's a pain au levain miche -- about 1300 grams, so not quite full size -- made with 50% Organic AP flour and 50% heartland mills Golden Buffalo.  I just got the Golden Buffalo in the mail and was excited to try it out, and I must say:  I'm impressed.  It's very flavorful, and has a nice kind of heirloom feel to it.  I tasted it before I used it, and it also seems to be quite a bit sweeter than standard white flour.  Like whole wheat, for obvious reasons, I think, but without the bran. 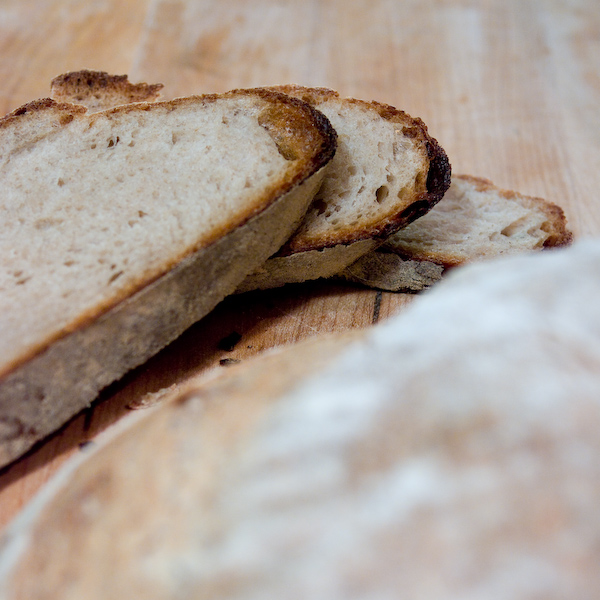 what do you mean by heirloom feel? How it tastes? How it feels when you knead, and what does that mean?

According to Heartland Mill, Golden Buffalo is somewhere between a clear flour and a whole wheat.  They sift their whole wheat through a fine sieve, but apparently not quite so fine as, say, KAF's first clear flour.  From what I gather, it can be used interchangeably with first clear flour if you mix it with a little bit of white flour.

As to why I say it has an heirloom feel:  I recall Michael Pollan talking, either in _The Omnivore's Dilemma_ or in _In Defense of Food_ about how white flour has changed from the 19th century to the present.  As I recall, he says that 19th century whites were not nearly as white as today's flour -- that they contained a great deal more of the germ.  My impression, from his description, is that he's talking about something very similar to GB.

And as to feel:  the flour itself feels a little bit oily.  It clumps easily when I compress it, and it leaves a bit of a residue when I rub it between my fingers.  Mixed in dough, though, especially in the proportions I was using, it doesn't feel too much different from white flour.  It's higher protein so it absorbs a bit of water, but it feels silky when kneading it, and reasonably extensible when stretching and folding.

I know that a couple of other TFL people have some experience with it.  And I would love to hear other people's impressions if they want to chime in.

Thanks for the info on Golden Buffalo, wadam. I've been thinking of ordering some myself, but was worried the freight would be too high. I'll have to check out the shipping cost. From what other TFL people have said, it is like a high extraction flour that you would find in Europe (T85 maybe?), which is ideal for rustic miches like your beautiful one above.

I'd like to try it 100% in a miche to see how it would turn out, compared to a regular 100% whole wheat flour loaf, have you thought of trying that?

If you search on bwraith's blogs here, he has used Golden Buf. a lot, as has zolablue.

Interesting information! I grind my own whole wheat flour and have thought of sifting out some of the bran sometimes to experiment. Has anyone here done that? I wonder what type of sieve would be used?

I just baked my first Poilane miche, and was very successful sifting a lot of the bran from the whole wheat flour.

I use King Arthur 100% Organic Whole Wheat flour.  I don't know if you have ever used a commercial bakery sifter, but it looks like a big round cake pan, with a screen for the bottom.  Well, I bought a very small twin at the chinese market, about 9" diameter, and about 3" deep.  The great thing is that the sifter (who knows what the chinese use this implement for?) is much finer than any sifter I've ever used.  I put the whole wheat flour in the sifter, and shook it without touching it.....the bran separated very nicely.

It sounds like you are using a sieve. How fine a sieve is it? I think there are different types of sieves.

I've gotten lots of creepers out of my flour using them.  Fast too.  If you keep it dry and only bang the flour off it, it will last a long time.  Just bag it between uses.

You could call it a sieve....but it's on the isle with all the bowl like strainers in the Chinese market.  It's the best sifter I've ever used......and Chinese generally don't bake a lot of stuff, so I don't know what they use it for......I've used mine for sauces also....I couldn't tell you how fine it is; it's finer than any sifter I've ever used though.....if you sift King Arthur Whole Wheat flour by just shaking back and forth....then all the bran is left, or a lot of it.

I really want to try the Golden Buffalo flour from Heartland Mills, but YIKES! the shipping is over twenty dollars!  That is way too pricey for something that I am not sure I will love.

Is there any other flour that is similar to Golden Buffalo from another company?

I hate to be cheap, but twenty dollars for shipping is just more than I can justify.

On Bill Wraith's strong endorsement, I bit the bullet and payed the high freight costs for 10 lbs of GB flour a while back. I have made Miche's with 100% GB flour a couple of times.

Compared to KAF First Clear Flour, it absorbs more water and it tastes more like whole wheat flour, but with less of the bitter bran flavor.

I have not tried it mixed with white flour, but that sounds like it would be good in a high hydration pain au levain.

If the cost isn't prohibitive, it is definitely worth trying, but, to my taste, it is not wonderful enough to order repeatedly.

That's a pretty good description of it.  My impression is that the shipping costs needn't necessarily be as shockingly expensive as they sound.  I ordered 20lbs of flour from Heartland Mill -- 10 of GB and 10 of AP -- and the shipping cost was $20 or so.  If they're shipping at a flat rate of $20, or even just for 20lbs of flour, it could be worse.

I think it'll end up becoming a sometimes, but not everyday, flour for me.

I think that if it's a $20 flat fee then I may end up ordering some as well when I run out of my bread flour. If I can get 50 pounds of flour and still only pay $20 I'm game.

I wanted to find out the shipping charges. They were lovely to talk to and very helpful. The woman said she had never heard of TFL and I told her that there were many discussions about their flour on the forums. She was very pleased. They have no special prices for shipping. The more you buy the lower the cost. They use your weight/zip code and simply look it up on their table.

Anyway 50# of product from KS to my zip in AL. would be exactly $30.71. so 0.61 a pound. I am going to see if that is in the budget. They sure have lovely products. I asked if they had considered a flat fee for a certain weight but she said they had not. Hope this helps. c

I've recently received my first order from Heartland Mill.  Shipment was prompt, and the quality appears good.  The grain was bagged in plastic, then bagged in cloth, then boxed in cardboard.

I selected Heartland, in part, because they responded to my preliminary email, unlike a competitor.

Prices seem reasonable for organic.  Shipping seems a little high.  There is also a handling fee of $5.20 per order.  Though I'm not in Kansas with Heartland, they charged my state-wide sales tax.

I think Heartland is a reasonable option for those who can order in quantity and who want organic.  They also have some hard-to-find products.