Howard's been baking his way through many of Suas' recipes at a furious pace. His posts have been equally inspiring and enlightening. With Howard way ahead of the curve, the last few weeks I've found myself sifting through the debris and studying the dough scraps left in his wake. Wanting a simple, clean and filling every day loaf, I had my first crack at the whole wheat sourdough (dough scrap #1).

I branched a stiff white starter off my rye starter on Saturday morning. By Sunday morning, the stiff white levain was good to go. The whole wheat flour I'm using has a very high content of bran, so I'm paying close attention when mixing the dough. As opposed to Howard, who did a shorter mix followed by a series of folds, I went with Suas' directions, and did an improved mix. Due to the many bran particles in the dough, it's difficult to get a perfect windowpane, but after a total of 8 - 10 mins. in the mixer, and a few folds in the bowl using a dough scraper, the dough was remarkably strong when I tugged at it. With the improved mix, there are usually no folds during bulk fermentation, so the dough was allowed to ferment for two hours uninterrupted. 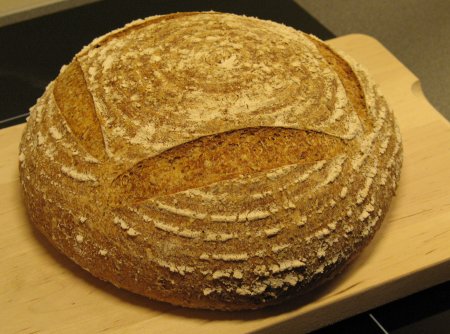 Just yesterday I received my first ever brotforms, and I was a bit nervous that the dough would stick during final proof. A liberal dusting prevented that... thank heavens. Instead, a nicely risen boule bumped down on the peel, and off into the oven it went. 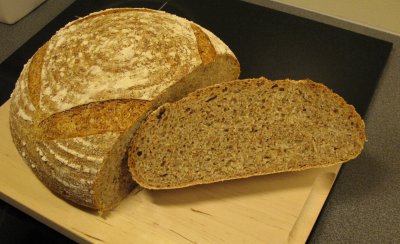 As you can see, the crumb is a bit darker than Howard's (probably due to the coarse WW flour in my mix?), and the above crumb is also more uniform. I'm guessing that Howard's initial autolyse (increased extensibility) and his shorter mixing time are both contributing to a more irregular crumb structure in his version of the bread. Additionally, I shaped the dough into a quite tight boule, which also usually suggests a more uniform crumb. The desired loaf characteristics should dictate the choices made during the baking process.

This is a solid everyday bread that can be used to virtually everything. It's got a deliciously moist crumb, and a splendid aroma. Top it with cheese, meats, fish, jam or nothing - it's a terrific bread either way!

You are such a talented baker, very well done! I have never made a 100% Whole Wheat loaf. How does the taste compare to a 100% Bread flour loaf?

That looks delicious. I'll have to look at that recipe.

I'm convinced I like the flavor of 100% whole wheat a lot, but only when the recipe calls for a good part of the flour in a soaker and it includes something sweet, especially honey.

I'm still looking for the kind of everyday whole wheat bread I've had in Holland and Belgium.

You are a most talented bread baker!

Hey, thanks so much everyone! BUT, *warning*, let me just clarify that this is not 100% whole wheat! This is Suas' recipe for "whole wheat sourdough" in ABAP, where there overall flour mix is 51.1% WW, 48.2% bread flour and .7% whole rye. Please keep that in mind, as the substantial amount of bread flour makes the crumb quite light in comparison with a 100% WW! I should've clarified that in the original post :-)

I haven't compared the recipes in detail, but I think this loaf should be quite similar to the "whole wheat levain" in Hamelman's "Bread" (which is a 50/50 WW/bread flour).

Gosh that looks fantastic! I would love that recipe : )

That is an amazing loaf of bread, very nice work!