What you put in your loaf has much more to do with the way your loaf turns out than what you put on your loaf, but glazing the exterior of your loaf can definitely help you achieve the effect you were after (i.e., soft, sweet, crusty, etc). It is, literally, the icing on the cake.

I made a batch of rolls and glazed each one with something different before scoring them. Compare: 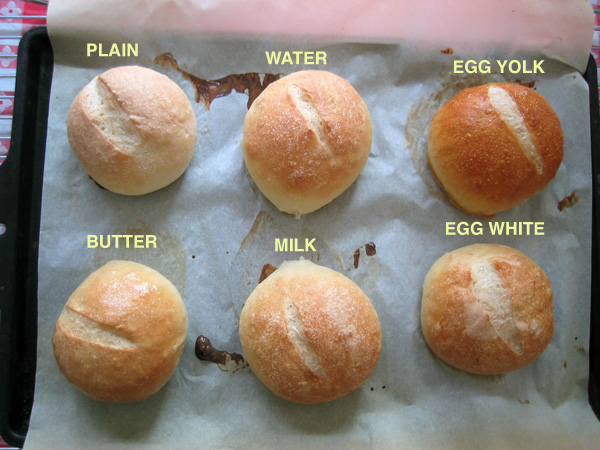 Let us look at them one-by-one. 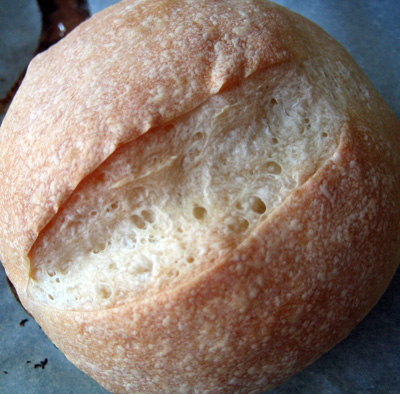 First is the control, with no glaze. The color was fairly light, the crust dry but not particularly crusty or crackly. There was not any particular shine to the rolls. 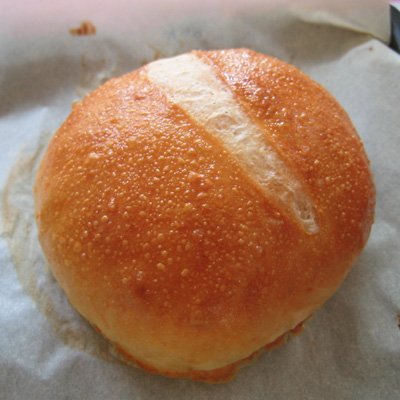 The one glazed in egg yolk came out the darkest. It stayed relatively soft, had a nice shine to it, and a slightly sweet, rich flavor. 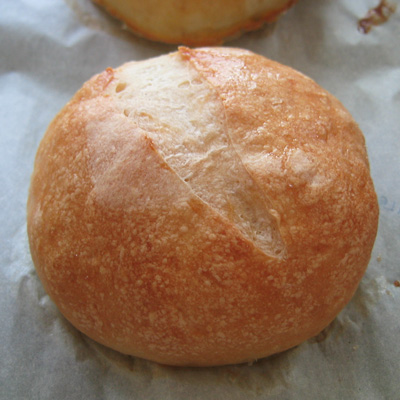 Egg whites also created a nice shiny coat and kept the crust soft. Adding a touch of salt to the egg whites helps break it down so it can be brushed on easier (something I failed to do above and may help account for the bare patches where I failed to glaze it properly). 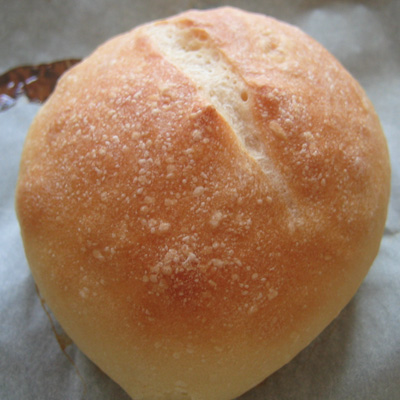 Water (above) and milk (below) both kept the crust on the soft side and gave the roll a soft, satiny coat. Milk is supposed to also darken the crust a bit more than water, though I didn't notice a significant difference here. The difference is, I suspect, more pronounced for a loaf that has to bake for 45 minutes than it is for a roll that bakes for 20 to 25 minutes. 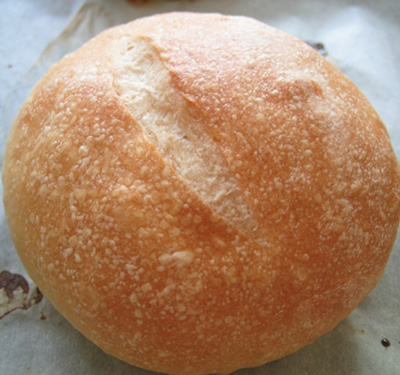 Cream can also be used to glaze a loaf of bread. It is supposed to give the loaf an even richer, darker glaze. 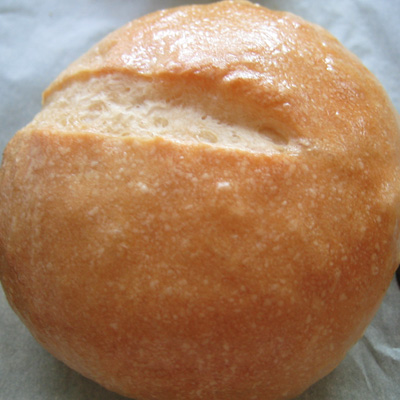 The buttered bun is above. I actually did not apply the melted butter until after the roll was removed from the oven: it was brushed on to the still hot bun. It created a very nice shine, darkened the color noticeably, and gave the roll a moist, rich glaze.

If crispy crust is what you are after, the secret is not to glaze. Instead what you need to do is fill the oven with steam in the first few minutes. Below is a previous batch of rolls I made: 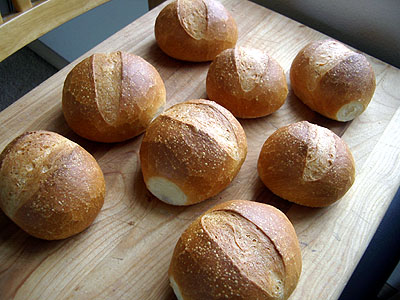 As you can see, the exterior of them was crusty and crackly. I achieved this by pouring a cup of hot water into a hot baking pan on the shelf below where my rolls were. The water evaporated, filled the oven with steam, and resulted in a wonderful crusty rolls.

There are many other things you can try glazing with: a whole beaten egg, a mixture of egg and milk, juice, and so on.

Glazes also make a good base with which to glue on seeds or grains to the exterior of your loaf.

I got a question via email about the recipe used to make these rolls.

The ones at the top of the article were just a basic french bread dough: flour, salt, yeast, and water. The ones at the bottom, the prettier darker ones, were the Vienna Rolls from the new Joy of Cooking (new meaning the 90s edition). They are a little more complex. As printed in the book:
1 package active dry yeast
1/4 cup warm water to activate the yeast in
1 cup warm water
2 cups all purpose flour
2 tablespoons vegetable shortening
1 tablespoon sugar
1 1/4 teaspoon salt

Mix all of the above together, then fold in:

Let rise an hour and a half, punch down, let rise again.

I made a couple of changes to this recipe: instant yeast instead of active dry yeast and butter instead of shortening.

I intend to post a full article after I have a couple more times to practice them, but hopefully this is enough for folks to get close.

I was under the impression that the introduction of steam only serves to maximize oven spring as the steam condenses onto the dough in the beginning of baking to prevent crust formation before the oven spring is complete. If this is so, is it not possible to create a fully crispy, crackly crust, without using steam, and simply high heat?

Steam prevents crust formation until later, which lets it spring longer and results in a thinner crust. The thinner crust is more likely to be crackly.

I'm not sure how your crust would turn out if you did high heat but no steam. My fear would be that it would be too thick and leathery, but it certainly worth trying, eh?

Tough and leathery would take a long time to produce. In my experience 500F for 5 minutes or so is enough. Back it down to 450F for the rest of the bake. I usually only bake for 20 to 30 minutes total per loaf.

Occasionally when I bake larger loaves for longer then that a thicker crust is produced, and so it doesn't turn out so well. But I've never had a problem with shorter bake times. But if the steaming method can increase the crackliness of the crust I'll be all for it.

I think it tends to soften easily, maybe even the day of the bake.

Jonquil Hi, I made that joy of cooking recipe with the 2 stiffly beaten eggwhites. Did yours come out with hard crusts (the plain ones?) Mine were a little soft. I baked at 400F for about 25 minutes. They were pretty, they tasted ok (a little bland, but my sister likes it that way), just softer than I wanted.

To get sandwich rolls with big holes would you just use your regular french bread dough? Thanks, Jonquil

What size and shape is the dough when placed on baking sheet for baking?

How to achieve size and shape?

Here's a great way to get a nice, crackly crust on most breads and rolls AFTER you have baked them:

mix about a Tablespoon of corn starch with a 1/4 cup of cold water. Add 1 cup of BOILING water, stir well and then brush STILL HOT glaze onto the STILL HOT bread or rolls.

Added on Feb. 3: I guess it should say "extra shine" more than the crackly crust. When we used this glaze in the bakery, we used it on breads that most likely already had a nice crust. But, with the glaze, it really gets a great shine on the crust and helps "seal" it.

Try the corn or potato starch glaze (see my post above) next time. Your breads will almost look like they're lacquered.

My first attempt at a loaf was from the lesson 2 of this site.  Taste wise, excellent, looks and shape (from a pan) excellent.  Crust color was nice, not too dark.  But, the crust was a little too stiff for our likings for sandwhiches.  What can I change to soften that up a bit?

I also wouldn't mind it being a little softer/lighter in the middle of the loaf.  Ideas?

loaf into a plastic bag or sealed container overnight.  This pulls moisture from the inside of the loaf to the crust and softens it.  Also brushing the hot out of the oven loaf with butter or olive oil will seal in steam and soften the crust.

Lighter in the middle of the loaf?  Try baking it hotter.  Then try baking for less time.  Be sure to let your loaf rise well before baking it.  You can also switch from water to milk for a softer crumb.

From a pastry chef my specialty being ,Viennoiserie, generally it is not advisable to do both. The only exception however is Croissants, Pain au Chocolat and Pain D' Amandes benefit from a short steam and egg wash. However when working with breads such as sweet doughs I would suggest only egg washing.

And in all honesty outside of sweet rolls and rich breads I've never seen the point in glazing savory preparations.