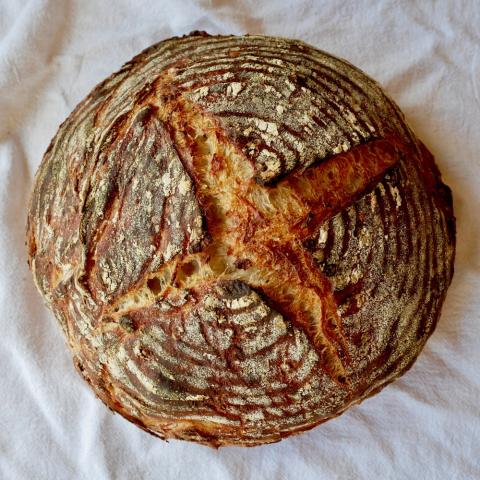 This ended up being a particularly sticky loaf, and I had considerable trouble getting it out of the banneton when it was time to bake. Hence, the loaf is a bit malformed. Still, it was moist and delicious and had very good crumb. 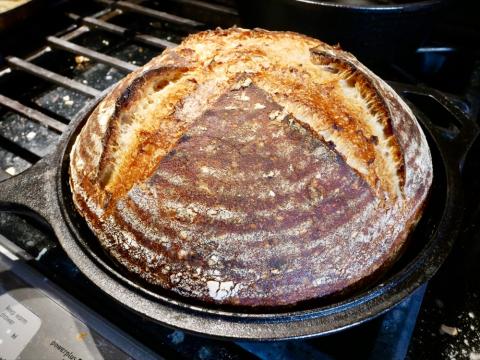 Another Oatmeal Porridge loaf, this time with some added whole wheat instead of spelt. 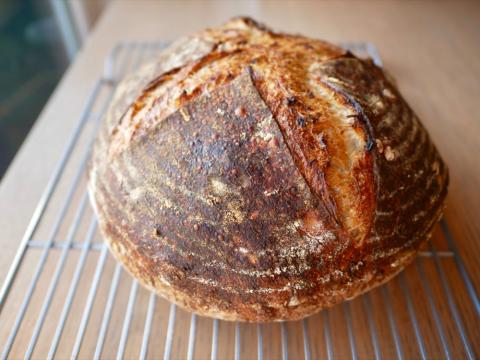 I do believe this was the first of many many loaves that where I added rolled oats. The way in which I added them continues to change and evolve, but on my first attempt, I actually precooked them.

I don't have baking times for this loaf, but it was almost certainly 450° for 20 minutes covered followed by 12-15 minutes uncovered.

My tasting notes say that this was a very well risen loaf, moist and fluffy, with excellent flavor. This would turn out to be a pivotal loaf for me, as the addition of oatmeal proved to make a huge different in my loaves from this point forward. 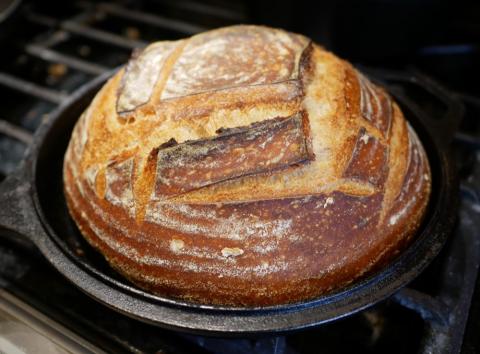 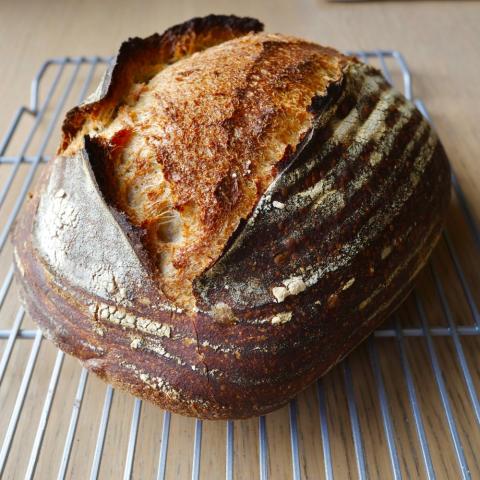 I've made substantial progress on my goal of baking and documenting 50 loaves this year, but I'm way behind on actually posting the results. This loaf was baked way back on January 26th, and I'm only getting around to posting it now. I have quite a backlog, actually -- apologies to anyone who might have been following along.

This loaf continues my fascination with spelt, which actually started on a trip through Italy last year, and had nothing at all to do with bread. While staying in Bagni di Lucca, we were served a regional specialty soup made with farro, beans, and tomatoes. It was really good, and I recreated it as soon as I got home.

While researching farro, I discovered it's just what the Italians call spelt, and spelt is just an ancient form of wheat, unmodified by the Green Revolution. So why not bake with it? It adds a nice nutty taste to the bread, and makes for a nice change of pace.

This particular loaf is strongly baked, and the crust was almost as shatter-y as I was hoping for. 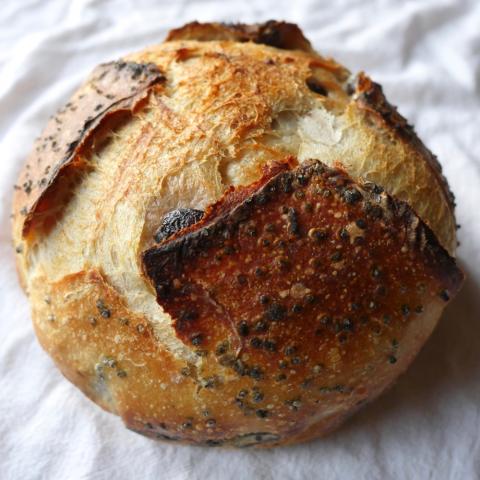 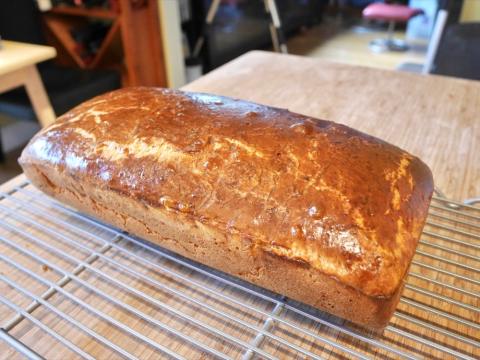 After my previous attempt at brioche (where I tragically left out the salt) I thought I'd try again. For this attempt, I just went with a straight loaf shape, and skipped the pseudo-braid I used previously. It's not a very exciting looking loaf, but the flavor was really very good. Pretty happy with the way this one turned out.

As before, I used this recipe from TheKitchn. 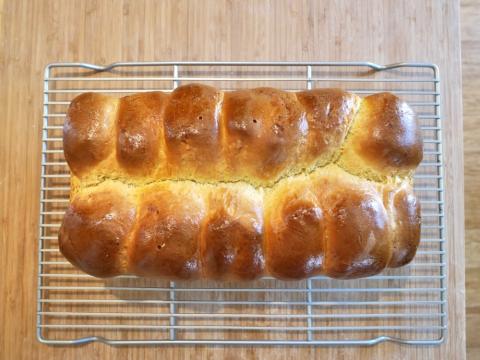 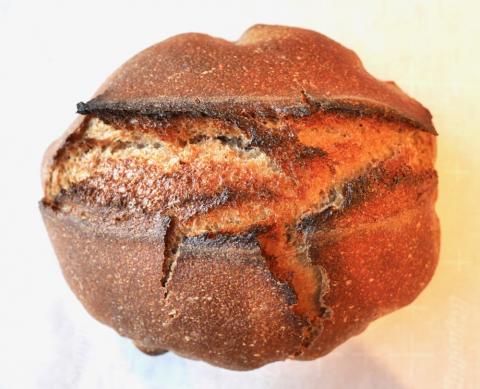 One of my coworkers has a serious problem tolerating wheat, though she is not celiac. She agreed to try some experiments (with her as the subject!) to see where the boundaries of her wheat issues lay.

Our first experiment, some time last year, was a very, very long ferment sourdough. That loaf was modestly successful -- her symptoms were relatively mild.

For this loaf, I came at it from a different angle, creating an all-spelt starter (through many successive feedings of a branch of my regular starter over 2 weeks) and 100% sprouted spelt flour. The theory here is that wheat underwent a fairly radical change in the  middle of the 20th century, so I thought her tolerance might be related to that. Spelt is an ancient form of wheat, of course, and so didn't get transformed by the green revolution. It seemed like it might be worth a try, and I've been digging the nutty flavor that spelt (in smaller quantities) gives to my loaves.

It's not a very attractive loaf, but she said it was really tasty. Unfortunately, it made her just as sick as regular bread, so modern wheat is not the source of her problem.

Regular turns at 20 minute intervals for 3 hours, followed by overnight proofing (~8 hours) on the countertop.

(Sorry, no crumb shot -- I gave this loaf to my coworker unmolested) 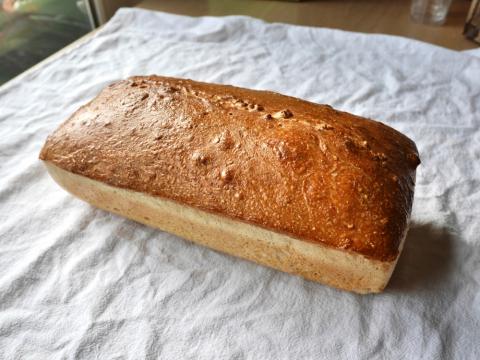 I'm falling behind on posting. Still baking, but I have a backlog of photos and posts to do. Trying to catch up.

Here's a loaf to change things up a bit. My wife is actually not super fond of "artisan" bread. She'll eat it, but she prefers softer bread, and always cuts the crust off regardless of what kind of bread it is. This is, needless to say, a bit of a sore point in our household.

I thought I'd experiment with some alternative forms to at least get closer to a loaf she would like. This one is just my standard sourdough method, but baked in a large "hearth pan". It's a big loaf.

Irregular turns for ~4 hours. I didn't form a loaf on this one, just put the dough into the hearth pan (after spraying with a light olive oil). Proofed overnight for ~8 hours on the countertop in a cool kitchen.