Holiday Gifts for the Bread Lover

I've had a couple of people ask me to recommend gifts for the bread lovers in their lives. Here are some ideas. 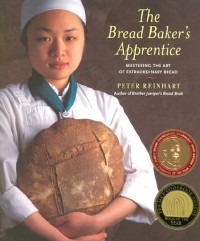 Alright, maybe it is not an essential, but Peter Reinhart's Bread Baker's Apprentice is still my favorite baking book by far. None of the other books I've read exude the same exuberance, the same enthusiasm for baking as Peter's book. This book is precious. Being into artisan bread baking and not having this books is like being into rock and roll but never having heard The Rolling Stones. If you know someone who likes to bake but doesn't have this book, get it for them immediately. A kitchen scale is critical for baking with baker's percentages. One that supports both metric and imperial weights also makes many more recipes available to you. There are dozens to choose from, so finding one that fits your needs and pocketbook shouldn't be too difficult. I consider an instant-read themometer an essential now. Absolutely the best way to know when your loaf is ready. A baking stone is really critical to making top-notch breads and pizzas. I have this one and have been very happy with it. An inexpensive investment, but well worth the cost. 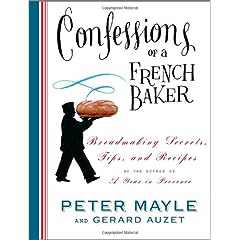 Peter Mayle, best known as the author of A Year in Provence, has a new one titled Confessions of a French Baker. This is a cute little book in which Mayle documents the secrets of his favorite baker, Gerard Auzet. Only 80 pages long and small enough to fit in your pocket, this book obviously isn't encyclopedic, but there are some outstanding recipes for baguettes, fougasse, olive bread, and other breads that make this slim volume unexpectedly rich. I would definitely recommend this book as an unintimidating introduction to the art of baking, and I would consider picking it up for yourself if you are going to be travelling over the holidays because it is one of the few bread books I've seen that could comfortably be read on an airplane and that won't weigh down your luggage. 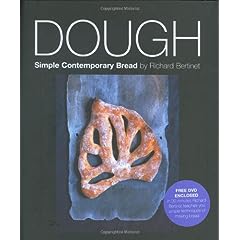 Dough: Simple Contemporary Breads looks promising. Containing an instructional DVD as well as the book, it promises to deliver a strong introduction to 5 fundamental doughs. Unfortunately, I haven't seen it yet, but if you see it in your local books store it is worth taking a look at. A stand mixer would make an excellent gift for someone getting into bread baking. I got my first one, an inexpensive KitchenAid, this year. I was hesitant to get one since I love hand kneading, but I've found that I bake at least two or three times as often now that I have one since I can be preparing a second dough while the first dough is mixing. And I still have plenty of opportunities to hand knead.

The cost of a stand mixer can vary greatly. You can get a decent starter one for just over $100 USD or spend as much as $700 for a high end model.

Baguette pans are a nice idea for someone who bakes French bread often. There is nothing more disappointing than having a beautiful baguette ruined when you are trying to transfer it to the oven. These help prevent those problems.

Banneton are an inexpensive way to make one's loaves look that much nicer.

Other books I'd recommend include Jeffrey Hamelman's Bread: A Baker's Book of Techniques and Recipes, Bernard Clayton's New Complete Book of Breads, Peter Reinhart's American Pie, Joe Ortiz's The Village Baker, Dan Lepard's The Handmade Loaf, and Linda Collister and Anthony Blake's Country Breads of the World. All of these books I've added to my bookshelf in the past year, or intend to in the months to come.

Do you have additional recommendations? If so, please comment with your suggestions

Holiday Gifts for the Bread Lover