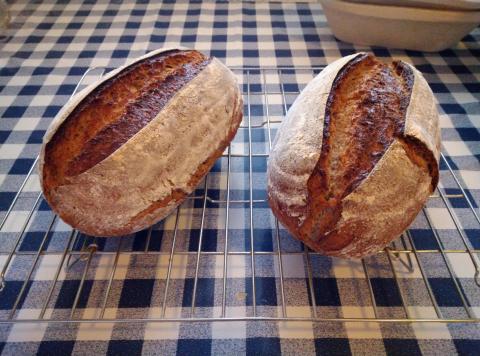 This is the first recipe in the rye chapter of Hamelman's book. I'd like to bake them all eventually, but I currently don't maintain a wheat starter, so rye it is.

I tried to  follow the instructions as close as possible. He seems to use a relatively stiff (80-83% hydration) rye sourdough for all these breads. It's hard to tell when it's mature and I forgot to taste it. Another new thing to me was the relatively high percentage of rye in the dough (I usually bake whole rye breads or mostly white flour breads) and I was surprised when it actually came together. Mixing it by hand would have been very unpleasant though.

The dough was surprisingly strong, but I was afraid it would suddenly fall apart and decided to bake it sooner than usual. There's no picture of this bread in the book, but I'm pretty certain it's not supposed to be this dense. 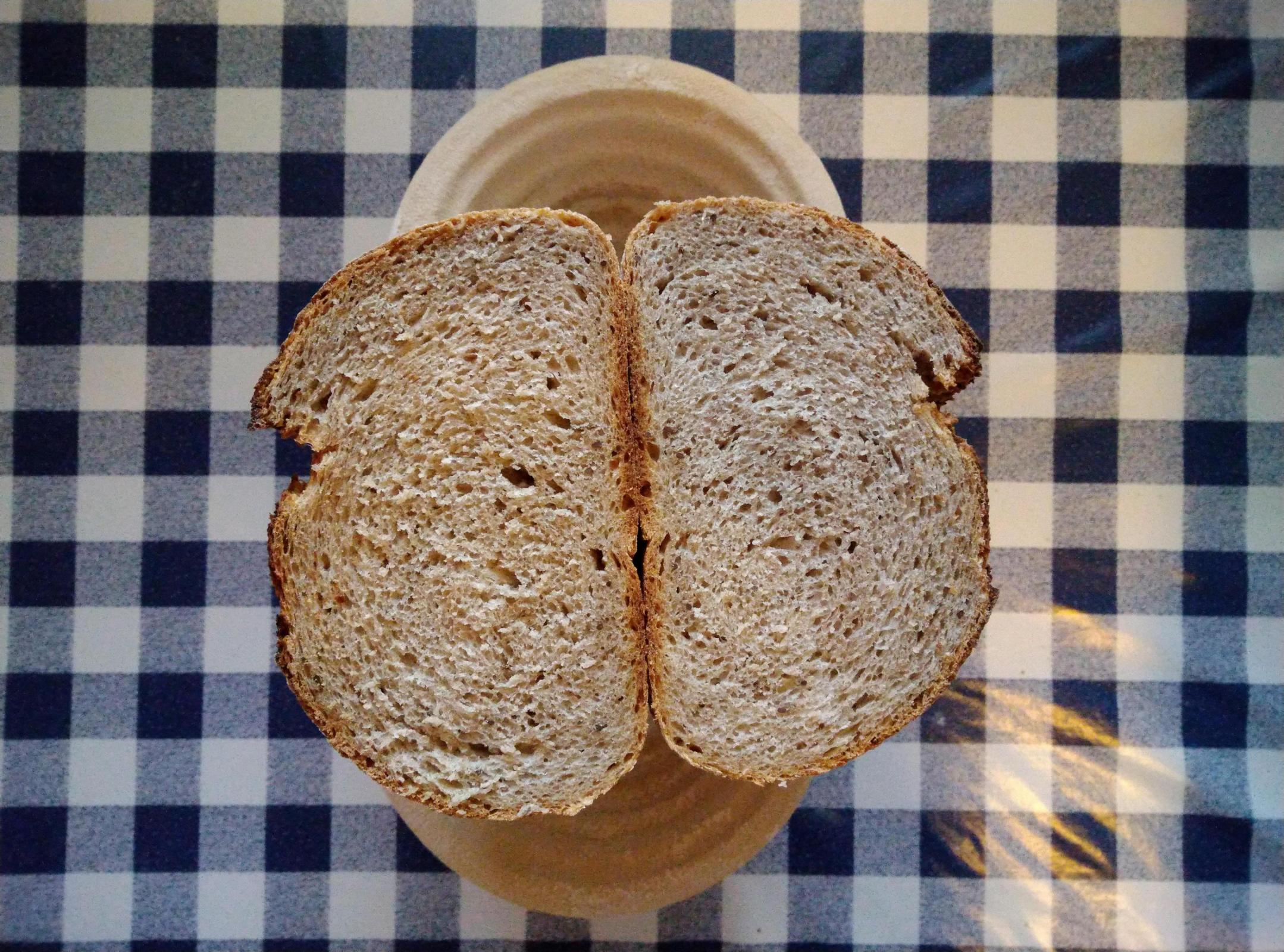 So far, I've only come across caraway in rye breads (which this is most decidedly not, despite the name) and I absolutely hated it (to put it very mildly). It was actually a bit more tolerable in a mostly wheat dough. Figured it could work with something sweet on top, didn't like it one bit with cloudberry jam. And it's absolutely jarring with Earl Grey tea.

There's a fitting passage in Calvel's book about panettone, which he classifies as a regional brioche:

The panettone is a very rich and highly scented type of hearch cake made in Italy. They are little known in France, and to be quite frank, are not greatly esteemed there, even though they are generally of excellent quality. This lack of acceptance is doubtless ecause they seem to many Frenchmen (and women) to be too strongly scented and flavored. It is unfortunate that excessive use of orange flower water, orange essence, and vanilla seem to overpower the delicate flavor notes from alcoholic fermentation and the use of eggs and butter in the formula, but these practices are suited to Italian taste.

I feel the same could be said about Germans (and by extension Americans) and caraway. I want to try this bread without it.

That looks like a cool bread. I think if you upped the hydration and/or proofed a little longer, it could be a little more open, but with 40% rye it's in the ballpark of expected crumb structure IMO.

Shame you disliked the caraway flavour. You can always skip it or try replacing with another spice that you like more, e.g. anise, fennel or coriander seeds all pair well with rye flavour. Or even cumin. Spices are a common addition to rye bread. It seems from what I gather only caraway made it across the Atlantic for rye bread, but other spices I listed above are all used either on their own or together (see recent discussions somewhere here about bread spice) and can improve the aroma of bread beautifully. It's all up to you, which spices you like of course.

They are handsome loaves and the crumb is likely what one would expect from 40% whole rye, at least I assume it is whole rye.  I have to agree with you I’m not a huge fan of caraway seeds and I think I’ve often disliked rye breads because of their association with caraway seeds.

I do think a bread (savoury as opposed to sweet) should stand on its own flavour merits without being masked or distracted by spices. If the bread has no flavour of its own, better bake something else. So I am always very cautious if I do use them. Having said that I don't mind a few caraway seeds in a rye, but maybe only 1/8 - 1/4 tspn per large loaf, so if you bite into one it's more of a "surprise" than a constant flavour.

I see Calvel is his usual miserable and forthright self in his (proxy) pronouncement on panettone. Though I do have sympathy with his comment on vanilla. Cheaper panettones probably use the same vanilla icing sugar that comes in a separate bag with pandoros. The vanilla flavour in these powders is obviously synthetic and smells disgusting, so we just throw it away.

I love the red-white colour of the loaves. Crumb looks very good to me.

As for spices, did you toast the caraway? I agree that caraway packs a punch. However, when I made my borodinsky the recipe said to toast it to transform the flavour to something more delicate. I much preferred the toasted and ground version.

And solod (fermented rye malt) is a great option too.

Without caraway this time. The formula is still the same: 60% AP, 40% whole rye (all prefermented), 68% hydration.

Rolled as thight as possible when shaping: 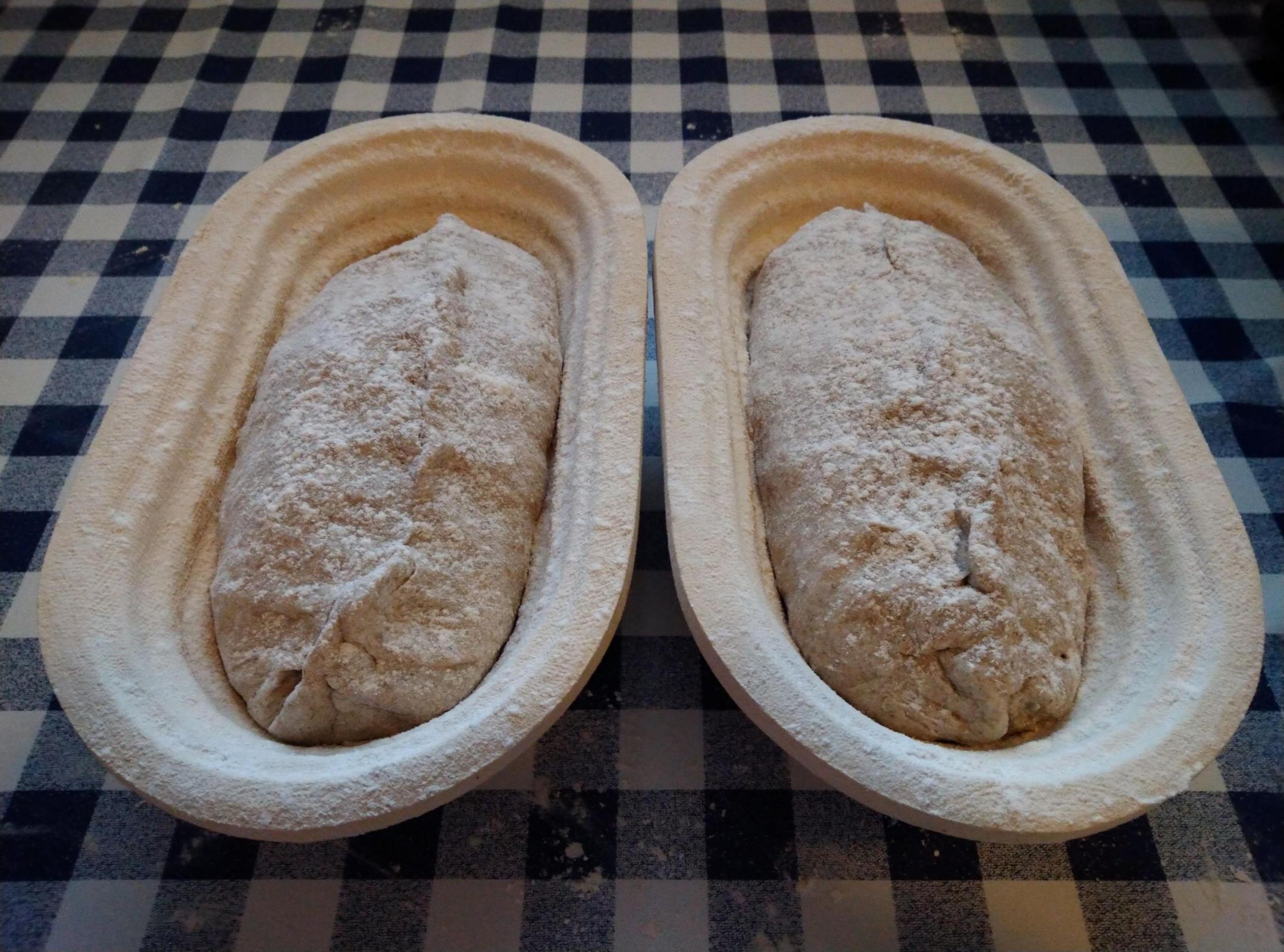 Proofed until relaxed. (The bannetons are for 500 g of dough, these are 600 g each. I think 500 g of pure white flour dough would have risen as much.) Could have maybe proofed longer: 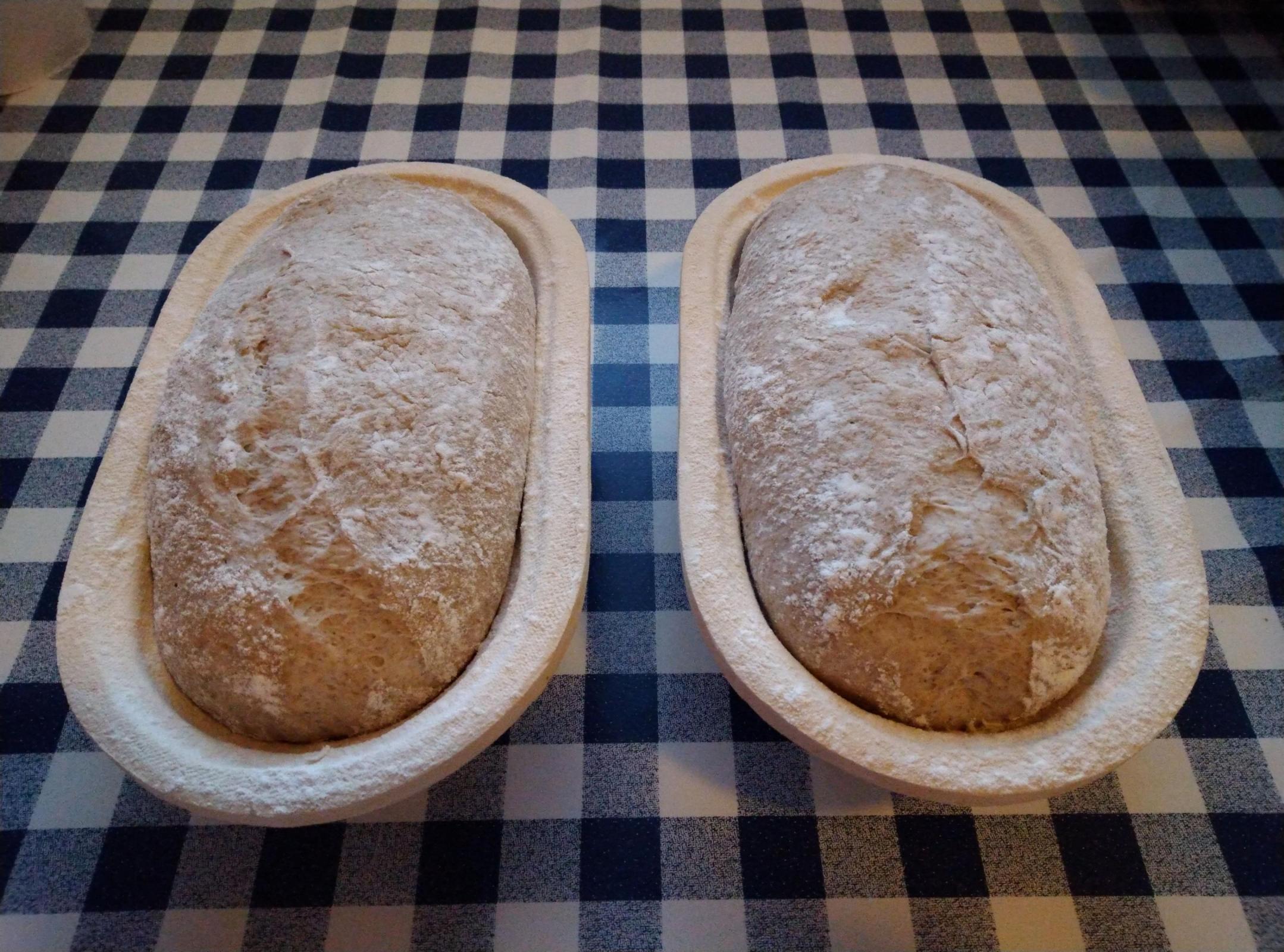 Forgot to turn down the heat after loading, I think the loaves would have sprung a bit more that way, but at least there are no cracks in the crust this time: 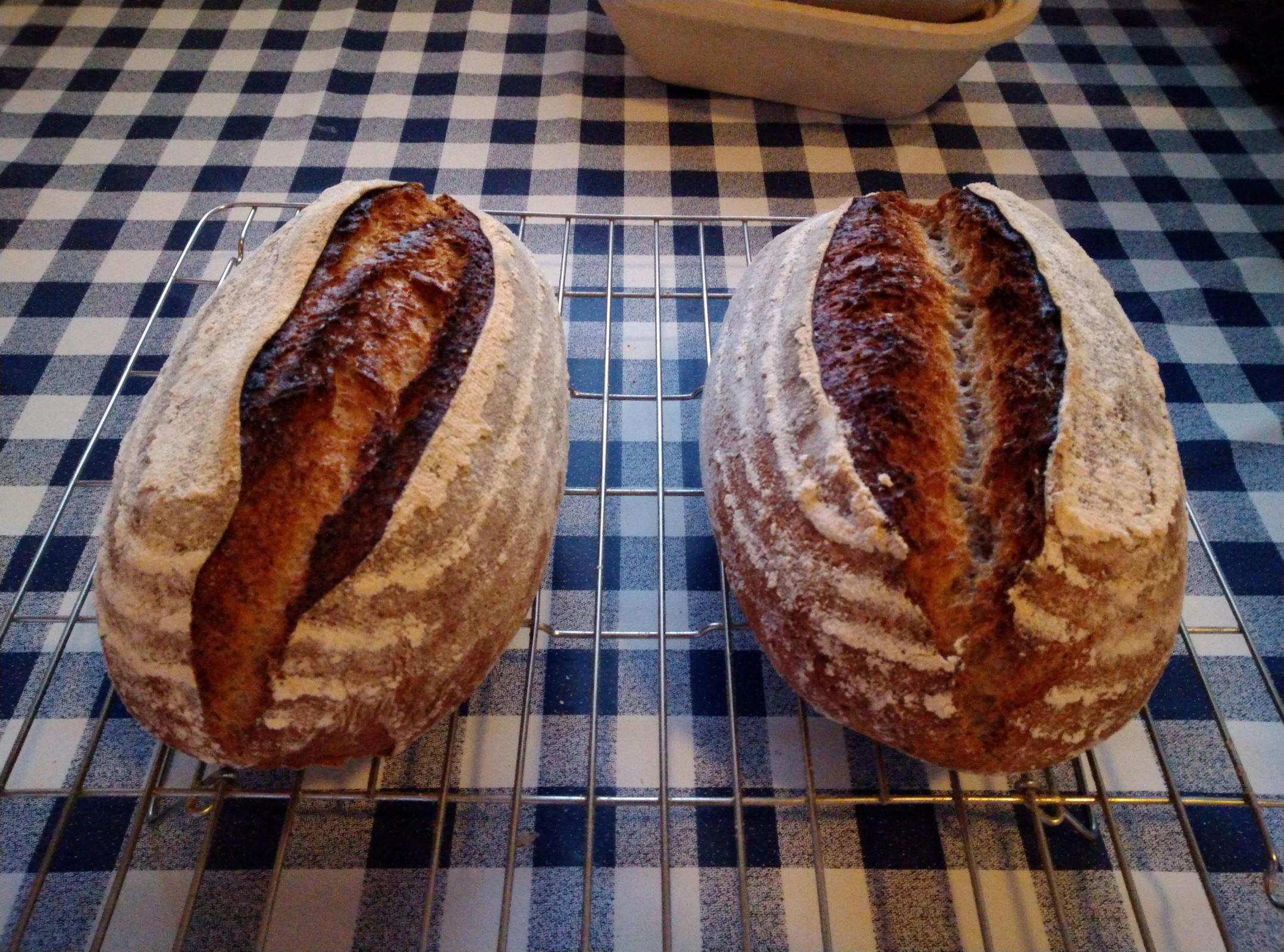 Cut while still warm. Not too airy, but a bit better than last time: 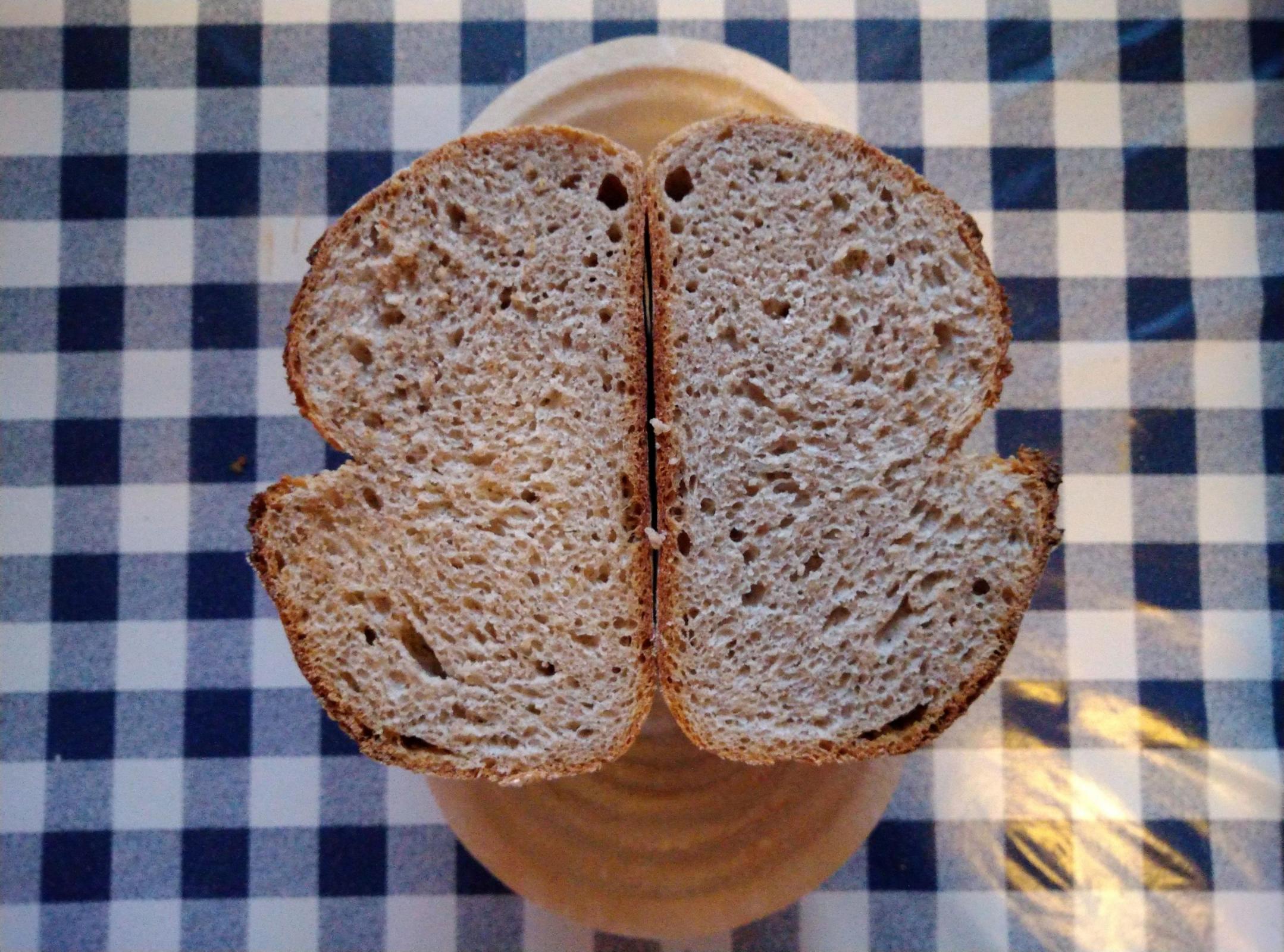 The taste is ok, but nothing to write home about. I've tasted super awesome white bread leavened with a rye starter, but this isn't even close to that. Hopefully it will become more nuanced when cool. My starter is just not very aromatic. On the other hand, there's only 1.8% of salt in the dough. Maybe it would be more exciting at 2%.

If you aren’t a fan of caraway, fennel seeds and dill seeds each play nicely with rye breads.  Or you can try brotgewurz, which is a blend of caraway, anise, fennel, and coriander seeds (usually) that have been toasted and ground.  While the caraway is present, it doesn’t stand out like a drum solo.

You might get a better flavour if you only preferment 50% of the rye and add the rest to the main dough. I would also reduce the amount of yeast as well - I don't think it needs to be that high.

But prefermented all of it at 120% hydration and 26 deg C for 9 h. It's way more mellow that way. But reducing the amount of prefermented flour would be worth exploring. Not sure about the yeast though. It takes me longer to proof that than the 50-60 min Hamelman calls for. 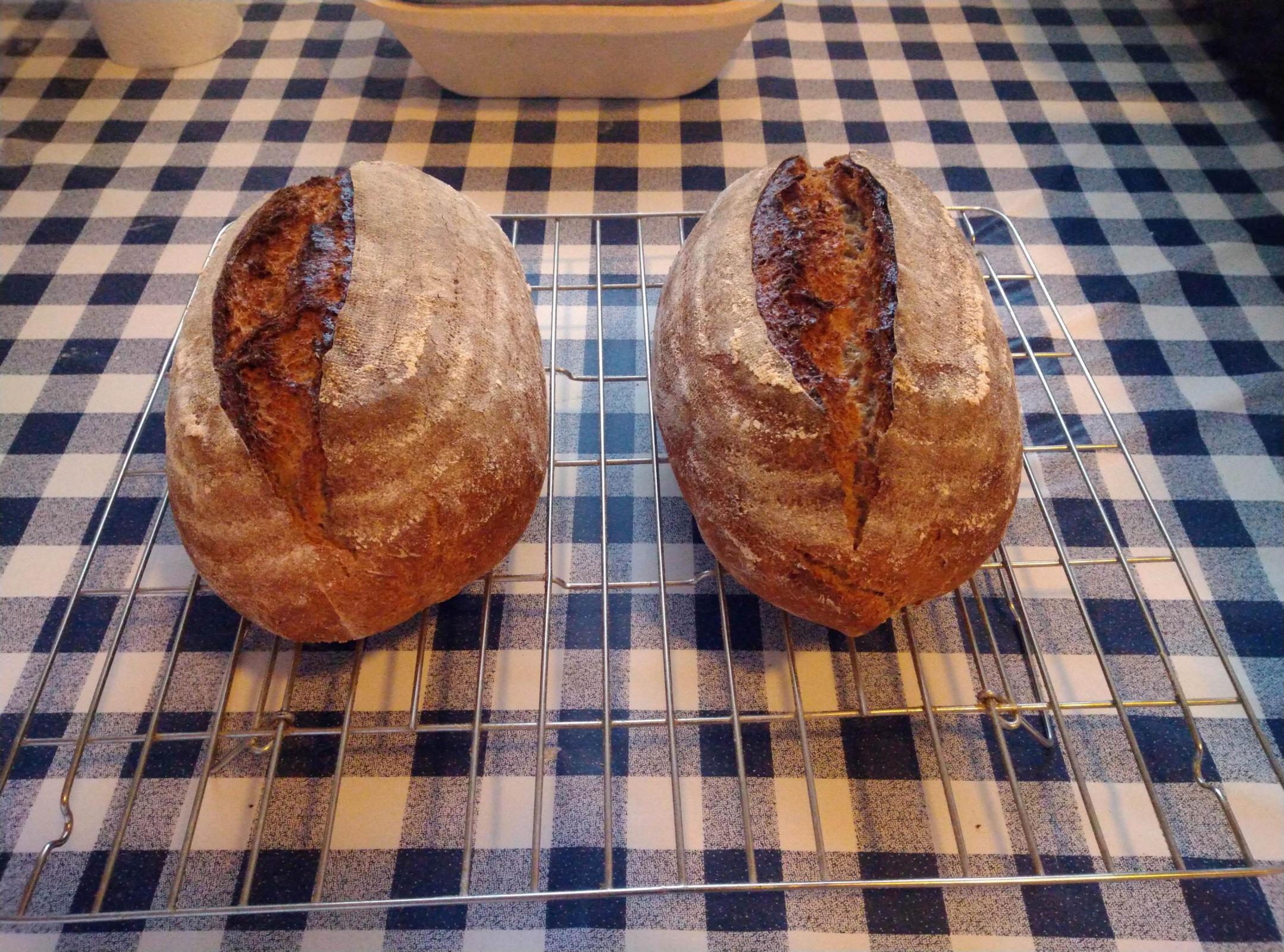 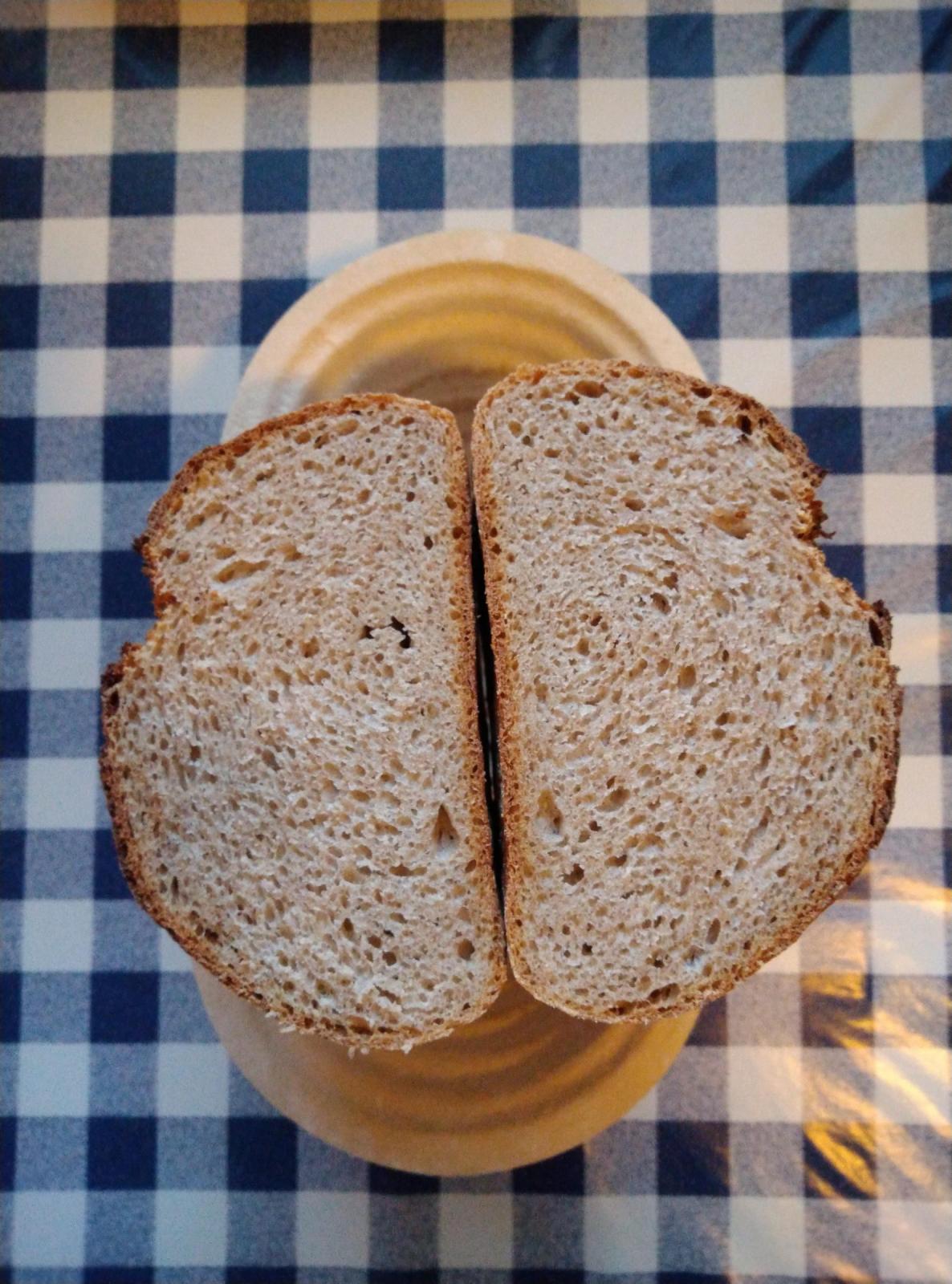