I’ve never had Bara Brith before, it is a traditional Welsh bread, however, it can be made more like a cake using baking powder.  A baker from the UK posted her recipe which seemed so simple so I decided to try baking it.  As I kid I hated Christmas cake, but as with so many things as I’ve gotten older I’ve grown to like more things I used to dislike.  The original recipe calls for soaking the fruit in tea, however, I’m used to Christmas cakes having fruit soaked in liquor so I used a combination of things left over in my liquor cabinet, Irish Mist, 12 year old rum and Sortilege which is a maple syrup blueberry liquor.  For the fruit, I used raisins, sultanas, currants and dried sour cherries.  The original recipe was for a smaller pan so I adjusted the ingredients for a larger pan.  It also called for self raising flour which I do not have, so I’ve approximated it in the recipe below.  Finally, I do not have spice mix which I understand is a staple in Britain.  I instead made a blend of cinnamon, nutmeg, cloves, coriander, ginger and allspice.  Usually this blend include mace which I did not have.

This is a very simple and tasty fruit cake from Wales called Bara Brith which literally means “mottled bread”.

There are two traditional recipes for this, one which uses yeast and and the other which does not. The first is more like a bread and the second more like a cake. Both are delicious sliced and served with plenty of butter.

The following recipe is the yeast-free version so it’s very quick. But the day before you make it the fruit needs be to soaked in tea or (liquor). This adds flavour and makes the cake beautifully moist.

In a large bowl, soak the fruit in strained tea and leave overnight.  You will be adding all the other ingredients into this bowl so a large bowl is necessary and measuring the soaking liquid is necessary as well as most of the liquid in the recipe is the soaking liquid.
Next day, preheat the oven to 180°C/360°F/Gas mark 4/5 .
Grease a large 900g/2lb loaf tin, and line the bottom with baking parchment (sticking it to the sides with little dabs of butter).
Mix the remaining ingredients into the fruit mixture and beat well.
Pour the mixture into the tin and bake for 1-1.1/2  hours, or until a cocktail stick inserted into the middle comes out clean.
Allow to cool in the tin for 10 minutes and then depan and  place on a cooling rack, removing the baking parchment. Serve with cold butter.
Wrap in foil to keep moist and place in a cake tin. This cake keeps extremely well.

I think in retrospect the cake needs butter included in the recipe.  Marie says that one traditionally butters each slice when eaten, but I’d like my butter in the crumb. 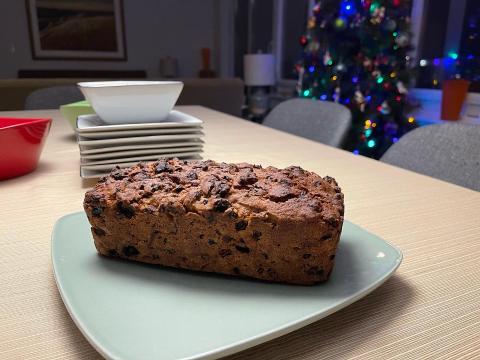 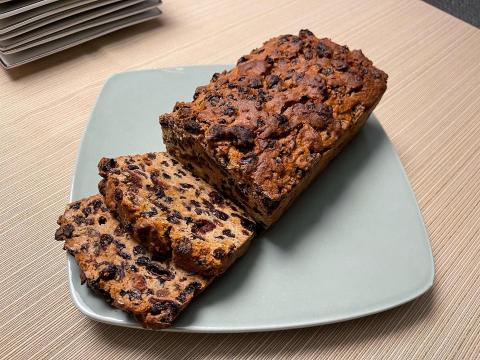 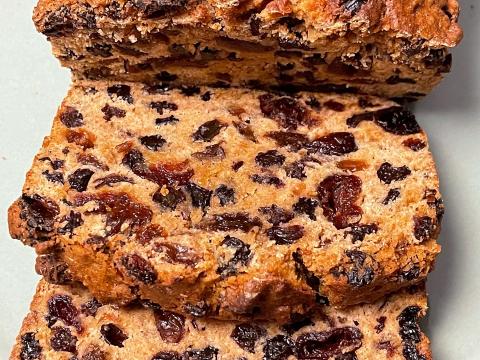 I think a lot of fruit cakes can be heavy and rich which puts people off and then they think all fruit cake isn't nice. Doesn't have to be the case. My mother made a really lovely fruit cake and even though as a child I hated cooked raisins (not the case now) I really liked it. Of course i've heard of Bara Brith (which I think is funny because it sounds like two Hebrew words when it's Welsh) but never made it nor tasted it. But if your bake is anything to judge it by it really looks delicious. When I make it to Toronto i'm going to be ordering a lot of stuff :)

Hope you visit Toronto some time in the future when the world opens up again Abe, I’d be happy to bake you some bread.

or at least what most people consider fruit cake, but this looks nothing like the fruit cakes I normally see and despise. It looks yummy, and a perfect holiday treat.

Thank you Richard, it is definitely boozy, maybe a bit too boozy to have as breakfast on a workday LOL.

It is fairly easy to make your own self-raising flour. Just add 2 teaspoons of baking powder for each 150g/6oz/1 cup plain flour.

If this recipe originates from UK, the self-rising flour doesn't contain salt.