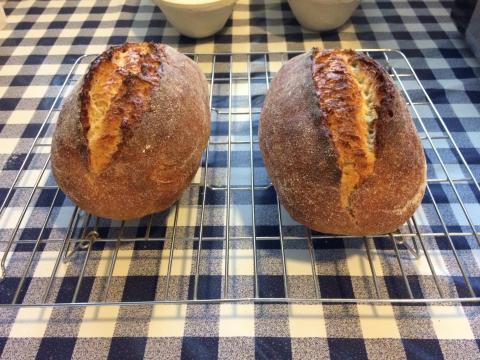 Durum is something I've wanted to try for a while. The color of the loaves you usually see in pictures is so intense and the flour in itself is not that common, which also makes it fascinating.

There is a recipe for durum bread in Jeffrey Hamelman's book (you all know and love), which is 90% durum and 10% bread flour at 80% hydration. 80% sounded intimidating, so I made a little ball of dough at 70% hydration to see what it would feel like (this is something I learned from a Full Proof Baking video) and maybe add water later to reach 80%. But even at 70% the dough felt really sticky and I thought I would't be able to handle anything higher.

Basically, this is 100% durum at 70% hydration with 20% pre-fermented flour. (Hamelman uses a biga and a liquid levain to pre-ferment 40% of the flour, but I'm a lazy bum with a stiff starter.)

Took one loaf to work expecting the taste to be something very distinct. Was somewhat disappointed. Got the crumb shots for both loaves this time though. It was pretty nice with olive oil and balsamic vinegar though. Even if nobody ever brings nice olive oil to break rooms. 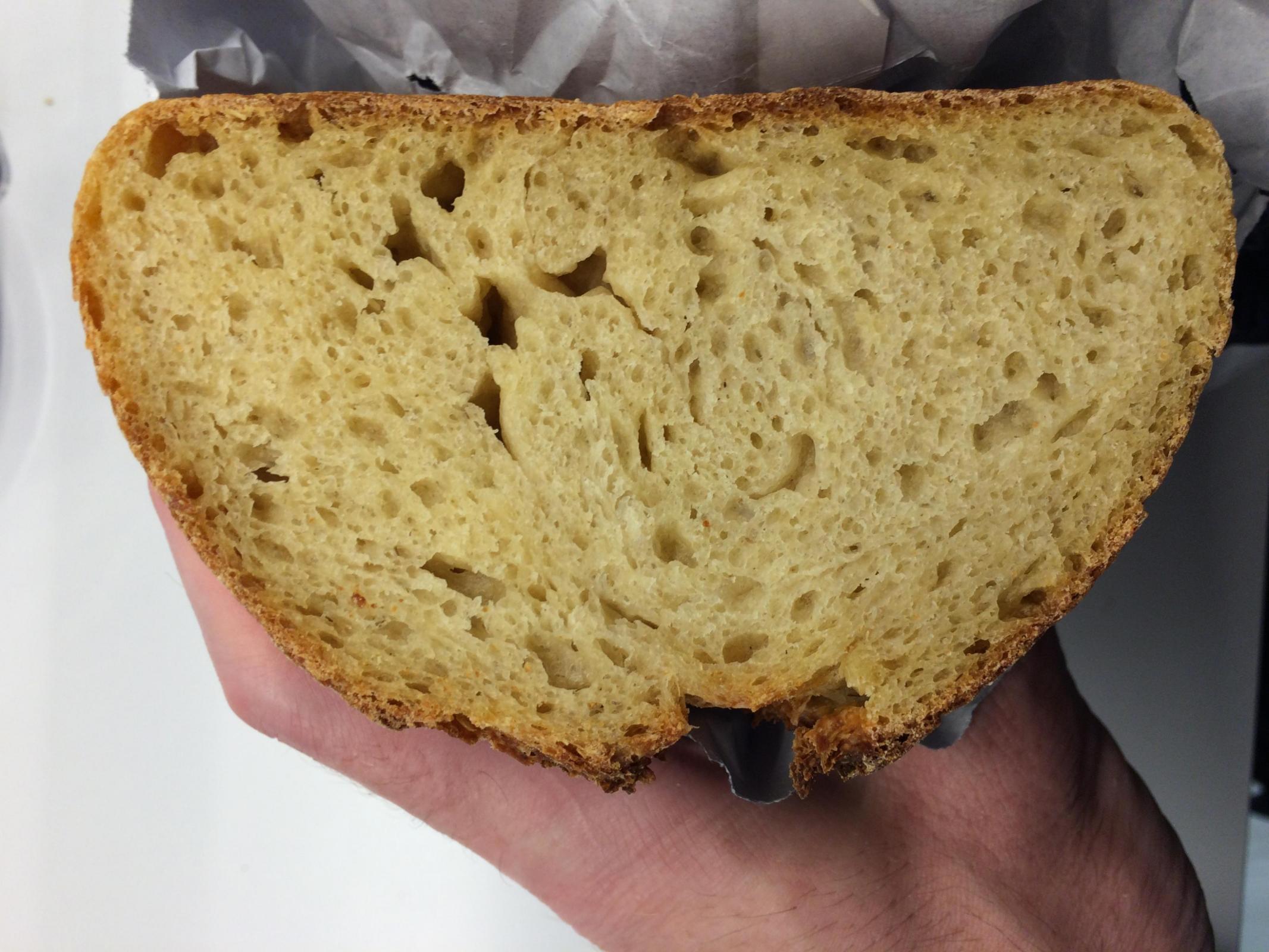 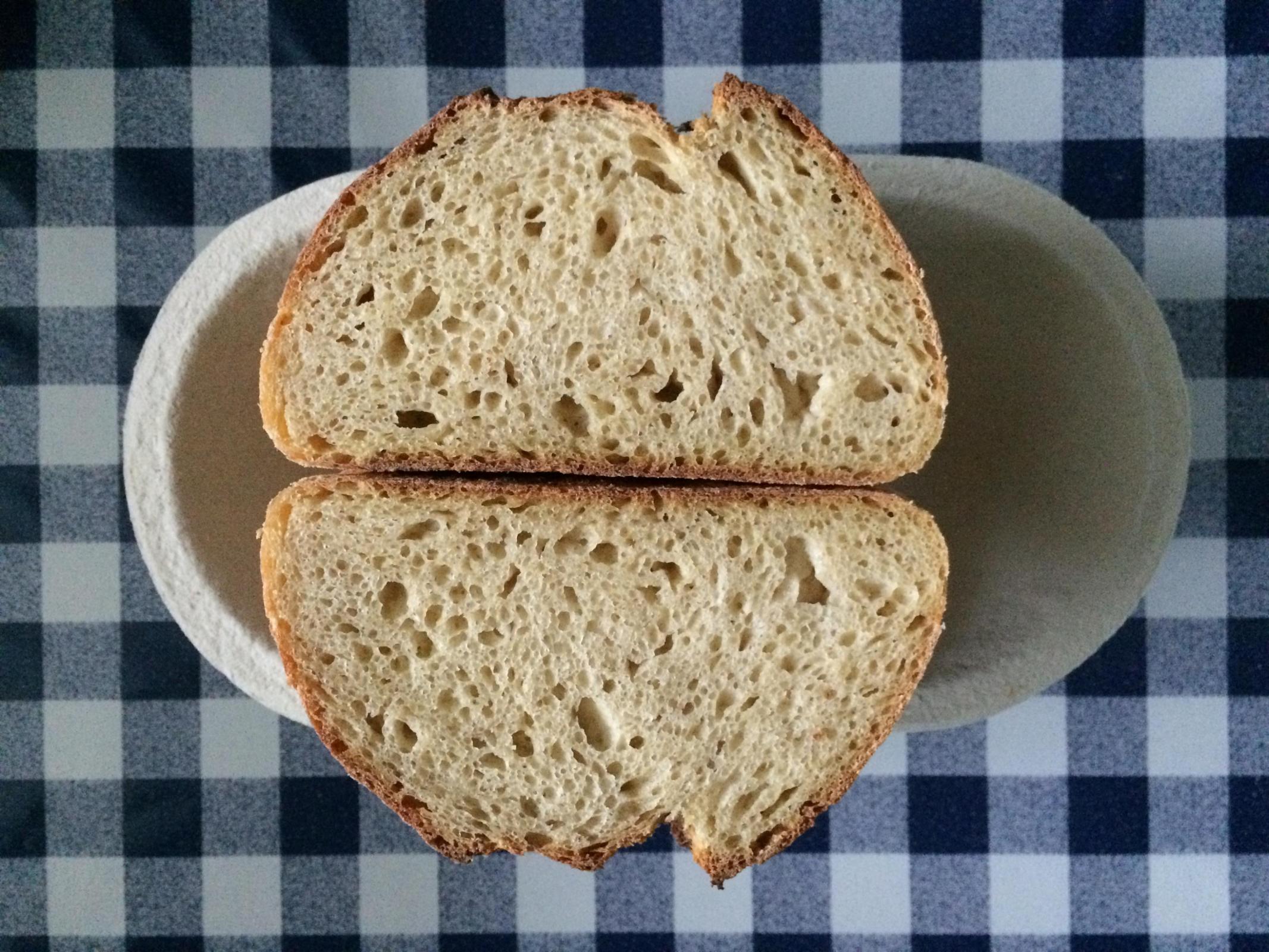 (Again, the pictures are really flattering. The bread is really quite dense.)

Of course, Jeffrey Hamelman was right all along. 80% hydration would have been more appropriate. That's something to try next.

They look very good and held up a good profile. My attempt at this bread was quite different; I couldn't get the dough developed at all and finished up pouring it into a loaf pan to bake. I note that you introduced an autolyse stage, maybe that's what I should try next time.

Bassinage/double hydration would probably be worth trying as well.

Nice color on the loaves.  Semolina is in my usual rotation.  I use approx 67% hydration with 33% of the flour in a poolish.   Tom Cat's Semolina Filone recipe on this site.  Note the recipe has a widely acknowledged hydration error, please note.

Be sure to use at least 2% salt with semolina.  That's what my palate prefers.

What brand and grind durum did you use?  I strictly use rimacinata, any brand.  The products sold as "semolina" in the US are non-standardized, so I have found it useful to buy Italian products, and use the more easily hydrated finer rimacinata grind.

Great advice. My last Durum bread was a soup with 80% hydration and put me off trying again. I use Semola Rimacinata from our local Italian grocer. I'll give 67% hydration a try. Thanks.

Very nice loaves jl.  Great oven spring and crust.  When I last did semolina I went all the way and did 100% and used 80% hydration.  Because the flour isn’t as fine as other flours my long saltolyse was helpful.  When first mixed it feels way to wet, like wet sand, but after the overnight saltolyse you end up with a gorgeous dough.  Then after slap and folds you can get full gluten development and a very smooth strong dough.

I usually just knead the dough until it's mostly smooth and try to create structure via folds. Do you own a mixer?

I do but only use it for milk breads and mix all my other doughs by hand including when I made the 100% semolina 80% hydration dough.  The long saltolyse really gets the flour hydrated and slap and folds until full gluten development is a simple thing to do.  I’ve read, from a post by Michael Wilson on TFL that he felt that fully developing the gluten upfront was advantageous for this type of flour.  I did find that to be the case.

The dough was actually a bit hard to handle. Both loaves stuck to the bannetons, but the end result is acceptable. 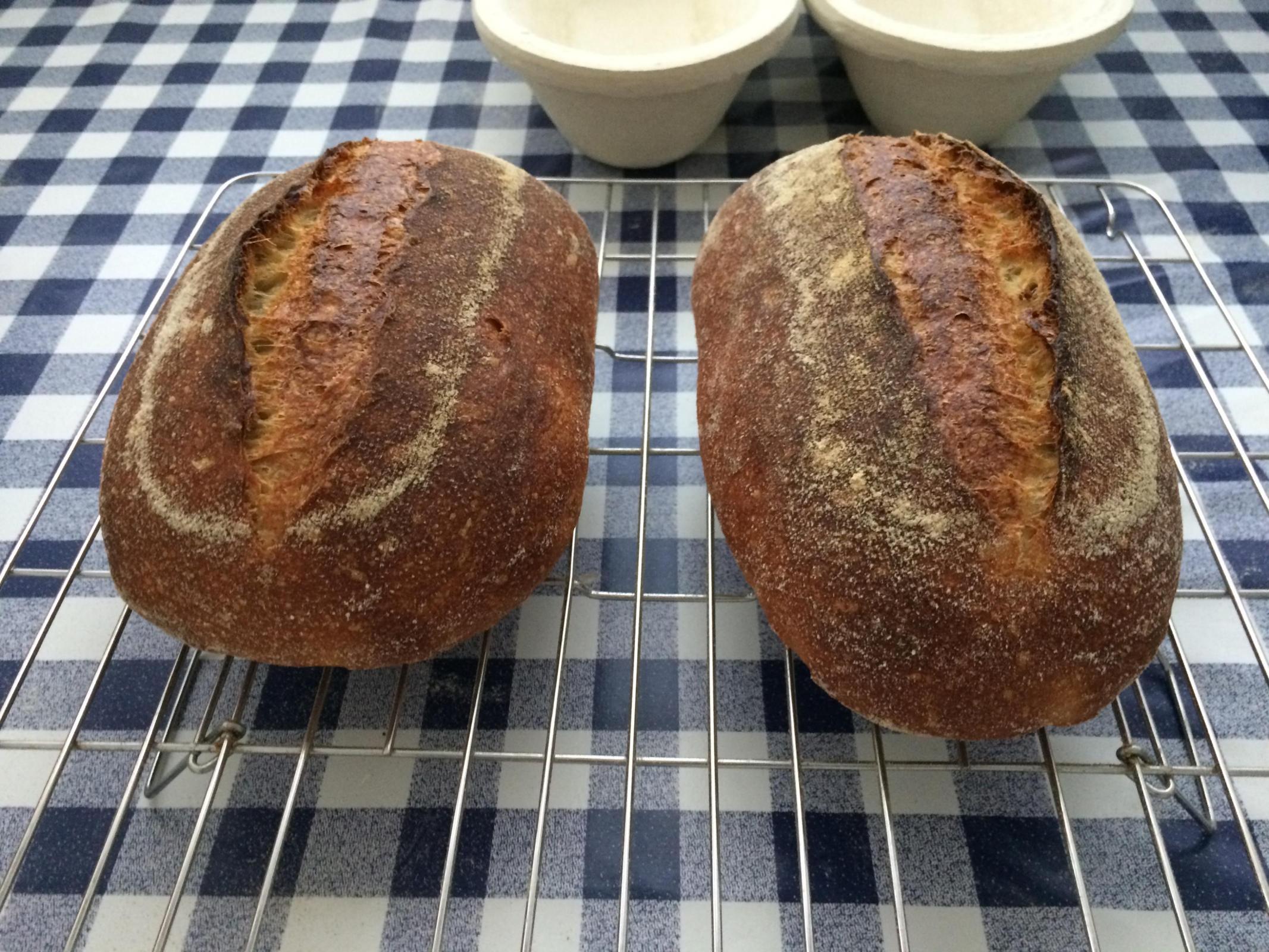 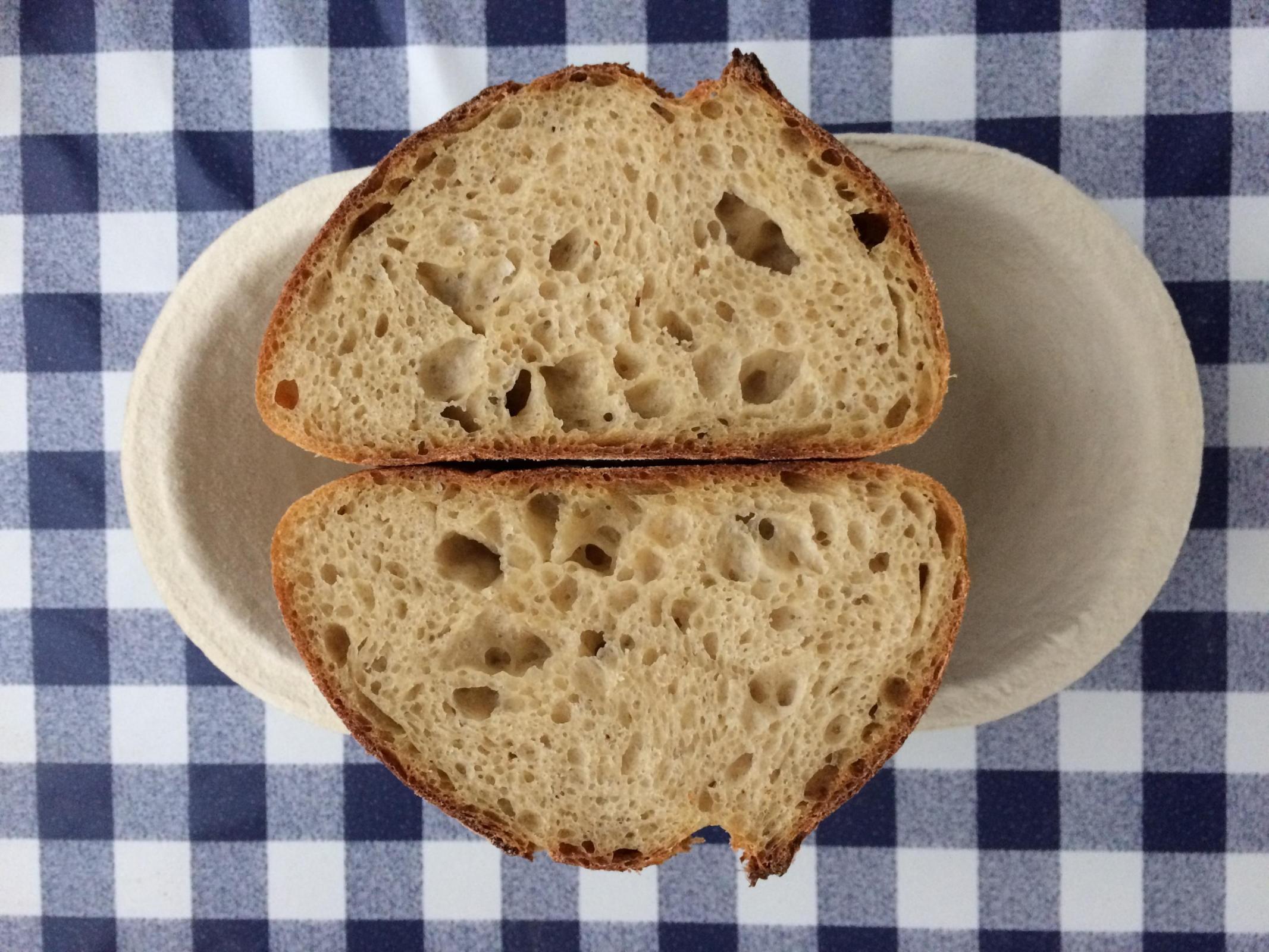 The crumb is indeed more open, but the bread is still really chewy.

You did a very nice job on those. I never got as nice a loaf using Hamelman’s formula, though I haven’t tried it in many years. If you haven’t seen it, TFL’s Michael Wilson has posted some excellent work on Durum flour. I have used his method many times now and have not had a failure with hydration up to around 84% with the flour that I use (Central Milling extra fancy durum).

A couple of things that I have found to help are to be careful not to over ferment the dough to avoid the stickiness, and to use a lined banneton or brotform. The resulting loaves are generally chewy, but I think that is, at least in part, the nature of durum.

This dough is so elastic that it seems to benefit from longer proofing. Any ordinary wheat loaves would have collapsed way sooner. This dough went sort of flat in the bannetons, but sprung up nicely in the oven. (Which could mean it could have been proofed even longer.) 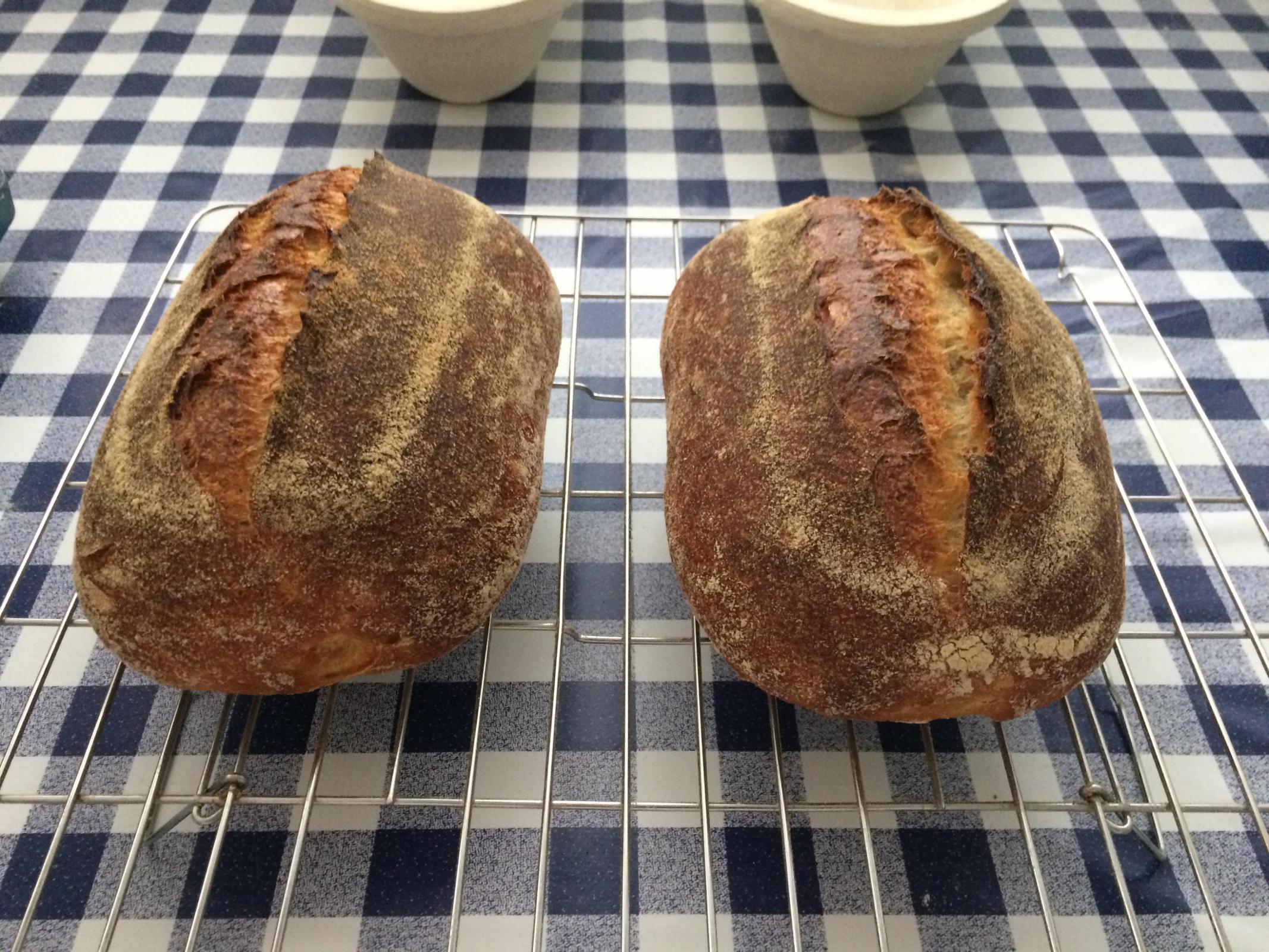 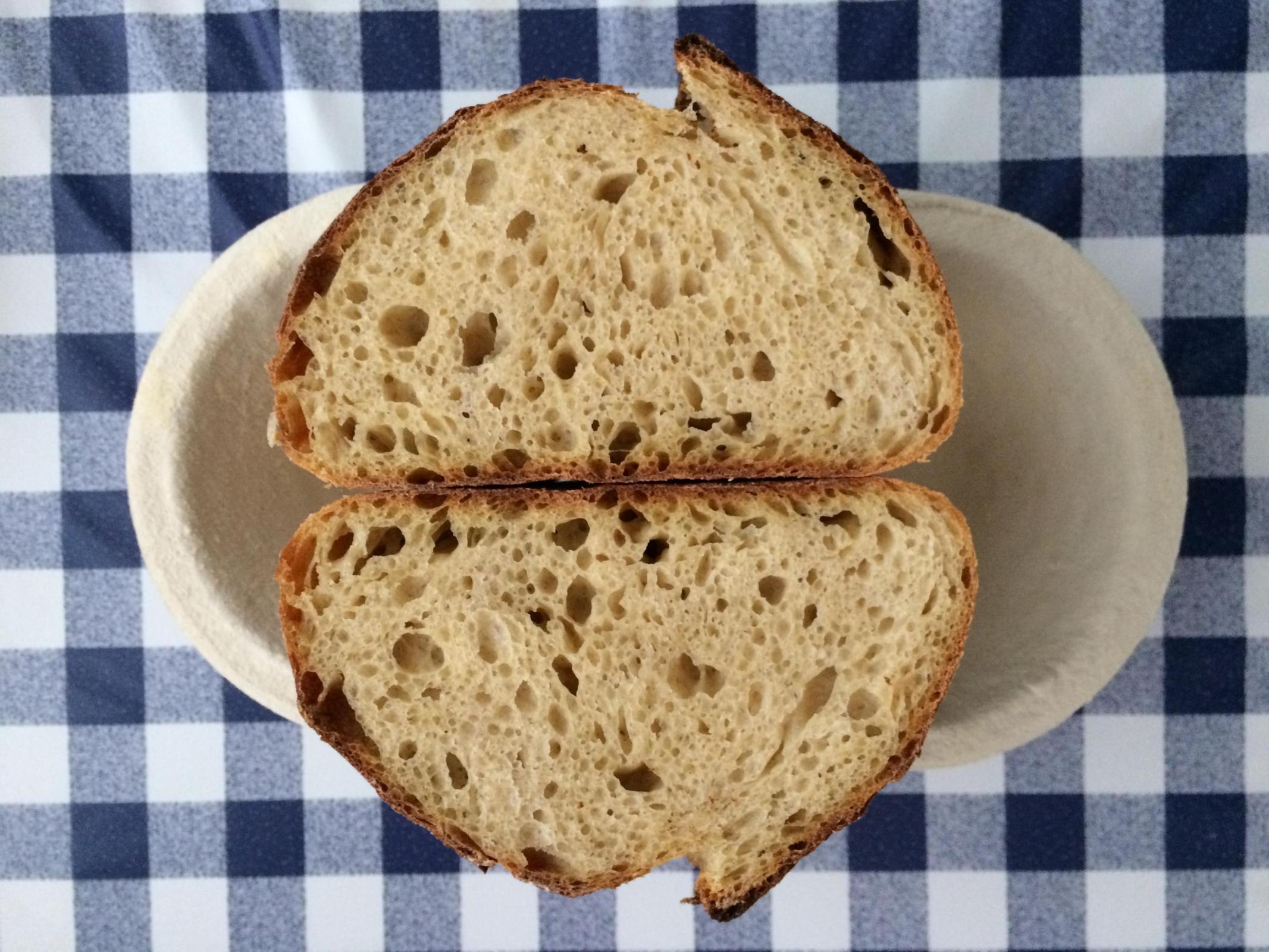 This is an interesting exercise, but the bread is not pleasant to eat at all. It literally feels like chewing a sponge.