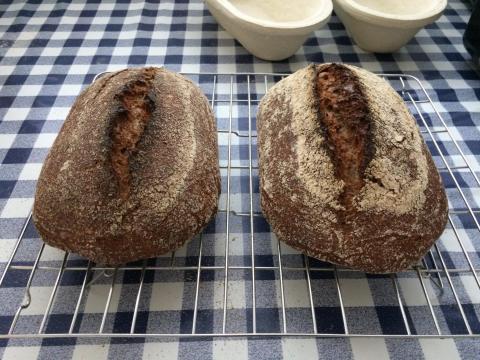 So far, I haven't managed to bake a successful whole wheat loaf. I've had the dough totally disintegrate a few times and had a fairly tasty (and very crusty) pancake once. Whole wheat ferments very fast and without warning just falls apart. I decided to try spelt, which is supposedly more extensible, but kept the stiff whole wheat starter going, because it's versatile. Lots of recipes contain at least some amount of whole wheat flour, which you can preferment in a stiff starter.

Just like wole wheat, this dough ferments very fast too and at 86% hydration gets very messy when it disintegrates, but that doesn't seem to happen as suddenly as with whole wheat. That would take about 3h @ 30 C/86 F with 15% PFF.

I divided it after 2.5h and lightly preshaped the loaves. (Tightening them at all is a very bad idea.) Final shaped after 10 min. Again, it's a bad idea to try to shape them tight. I tore one loaf and it degassed completly. And while it did rise a bit during final proofing it was destined to become break room bread: 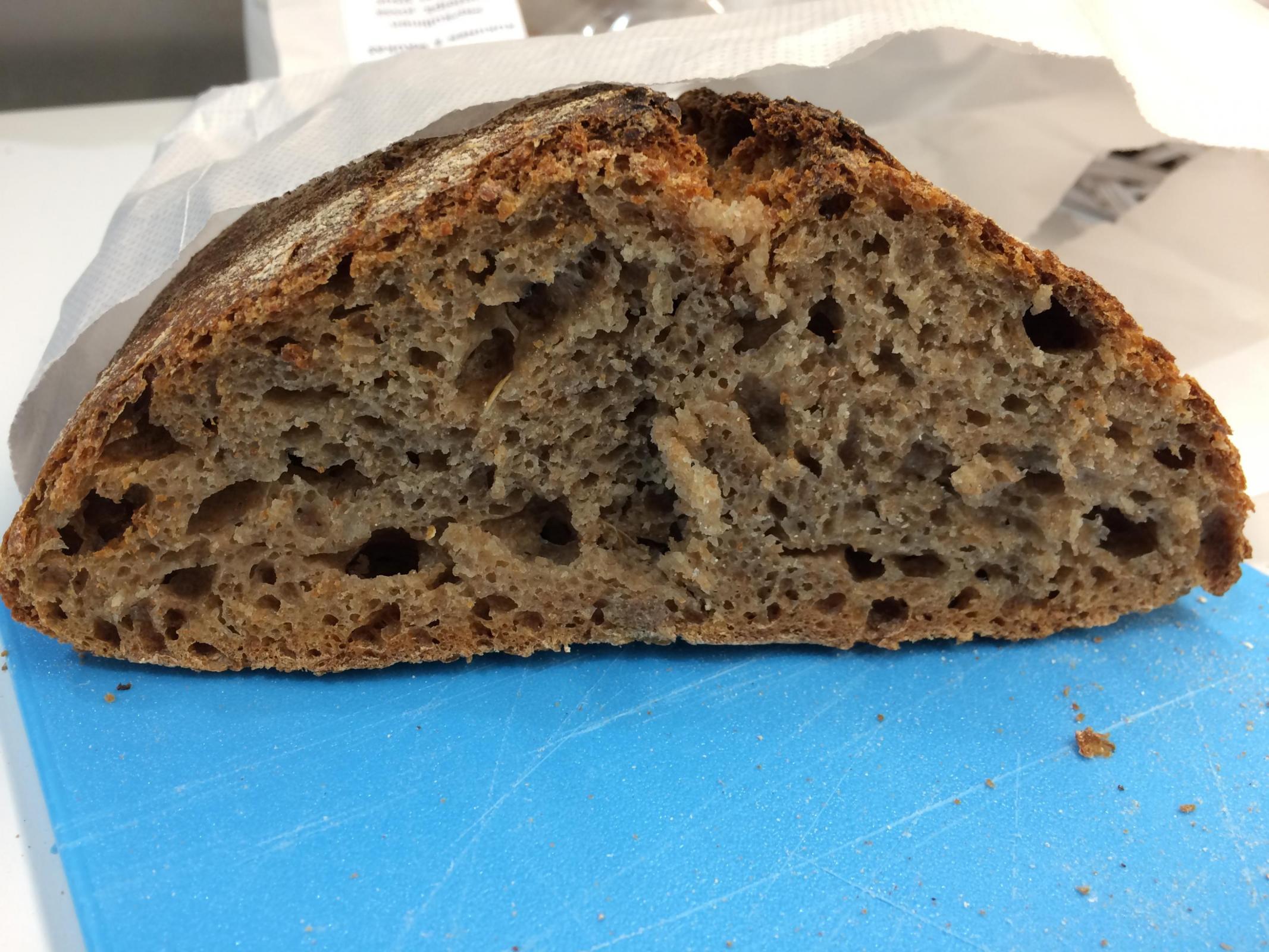 This dough proofs very fast, but doesn't seem to much puffier. 700g of dough barely fills a 500g banneton. A 500 g white flour loaf would be way over the top, but this barely reached the rim. It doesn't get much oven spring, either. It just sort of assumes the shape of the banneton and stays that way apart from the crack. And that forms very easily, so there's really no need to score. Barely scratching the surface is enough. 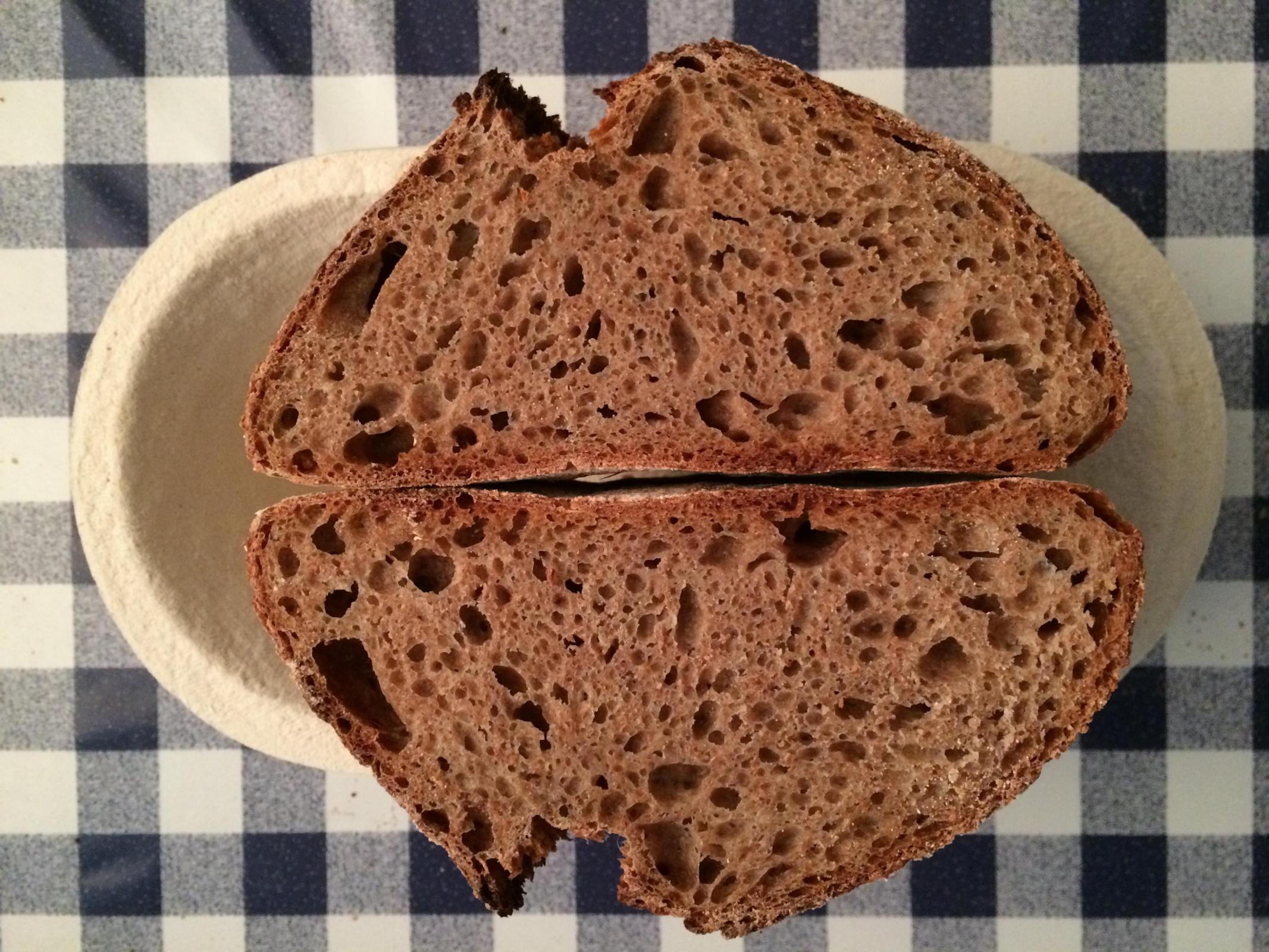 It looks ok in the picture, but the end result is still very dense. Not whole-rye-dense, but still a workout for the jaw. What spelt has going for it though is the taste. I usually don't like warm bread, but this actually tasted very sweet while still warm. With a stiff and active starter there's no perceptible sourness. There's enough acidity to make you want more, but not enough to resister as sour. I absolutely love the taste.

Nice looking loaf and that last photo is exactly the crumb I like.

Did you put the seam side down in the banneton?

The deflated loaf ended up that way and deflated some more due to repositioning. I think at this point the dough was pretty much stretched to the limit and then it just bursts like that.

100% whole grain is really a challenge.  One thing I found out the hard way after baking some pancakes myself recently, is that it doesn’t always need as much hydration as we think it might.  Part of the cause of my pancake bakes was overfermentation, the other part was overhydration.  If you’re finding that the dough is a bit too loose and difficult to shape or pre-shape, it maybe that the hydration is a bit too high.  Just a thought and an avenue to consider taking JL.