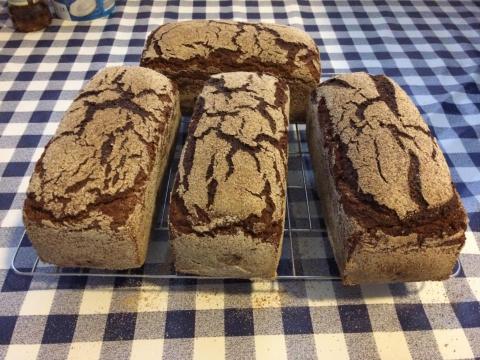 Jeffrey Hamelman's Bread is a magnificent book. The way formulas are presented is very concise and easy to remember and yet along with every formula comes a lively description of the bread. (I also love the personal stories strewn throughout the book. I don't use anchovies basically ever, but now I want to try to make an anchvy fougasse purely because of the description in the book.) The formula that fascinated me the most right from the start was Vollkornbrot. It's roughly 2/3 rye meal, 1/3 rye chops @ 82% hydration with some sunflower seeds thrown in.

It took some attempts to produce acceptable loaves, but in the process I realized I don't like sunflower seeds in rye bread. I left those out and at some point realized again that I have no other uses for rye chops. Also, this having become my daily bread at this point, I wanted to eliminate a work step, so the chops were left out as well.

This thing has gradually deviated a fair bit from the original recipe, although technically this probably still qualifies as Vollkornbrot. At this point it's 97% fairly coarse rye flour, 3% red rye malt, 88% water, 2% salt. I preferment 50% of the flour at 110% hydration (12h at room temp) and dump the rest of the ingredients in in the morging, mix, shape and proof in bread pans. Overall, the amount of work is fairly small.

Hamelman preferments 41% of the flour and also uses yeast, so the proofing time in his book is fairly short. With 51% prefermented flour and no yeast the final fermentation usually takes ~3.5h. 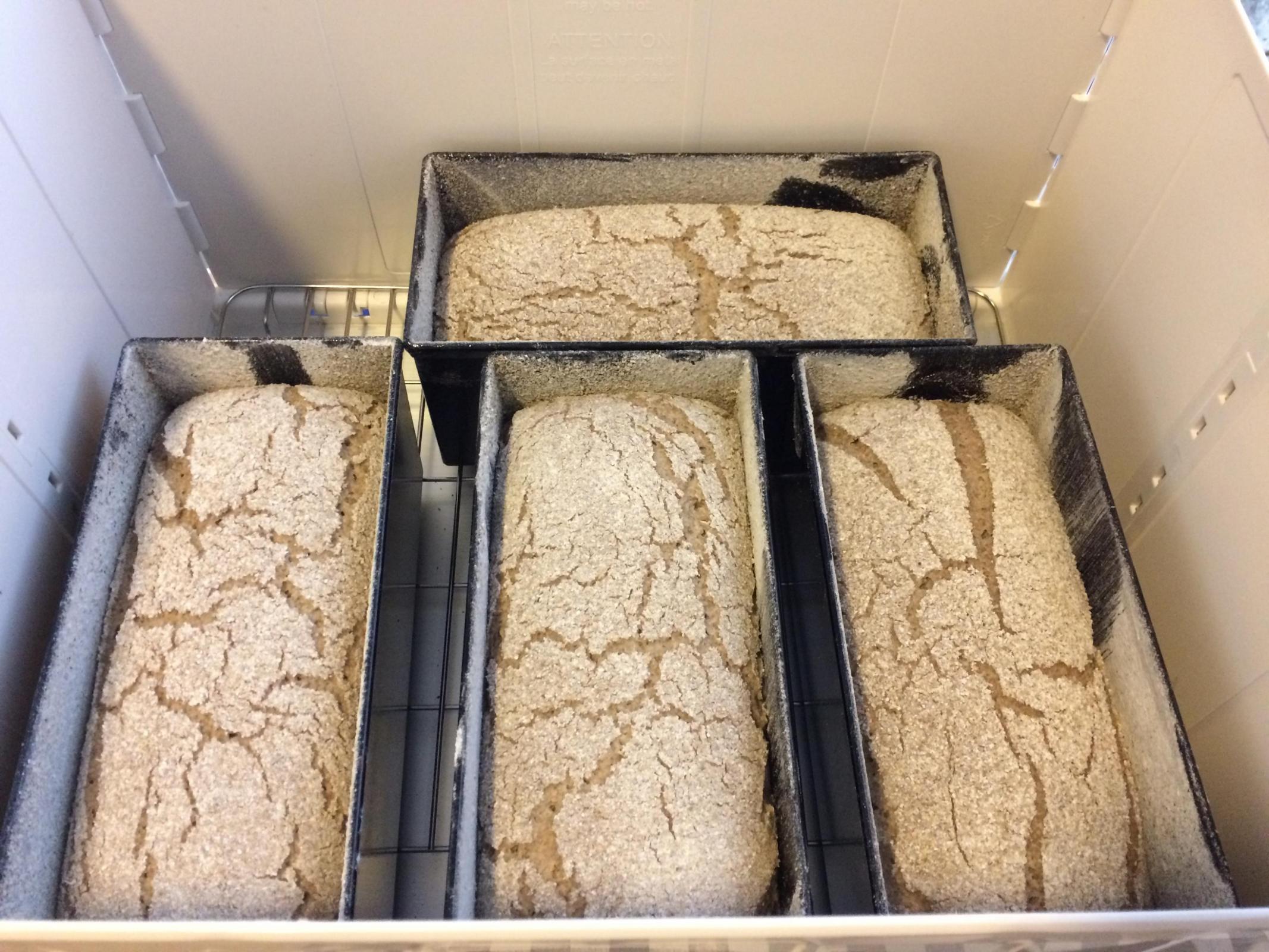 The proofer is basically the same size as the oven, so the pans fit neatly on the baking steel.

The crumb looks usually more or less like this: 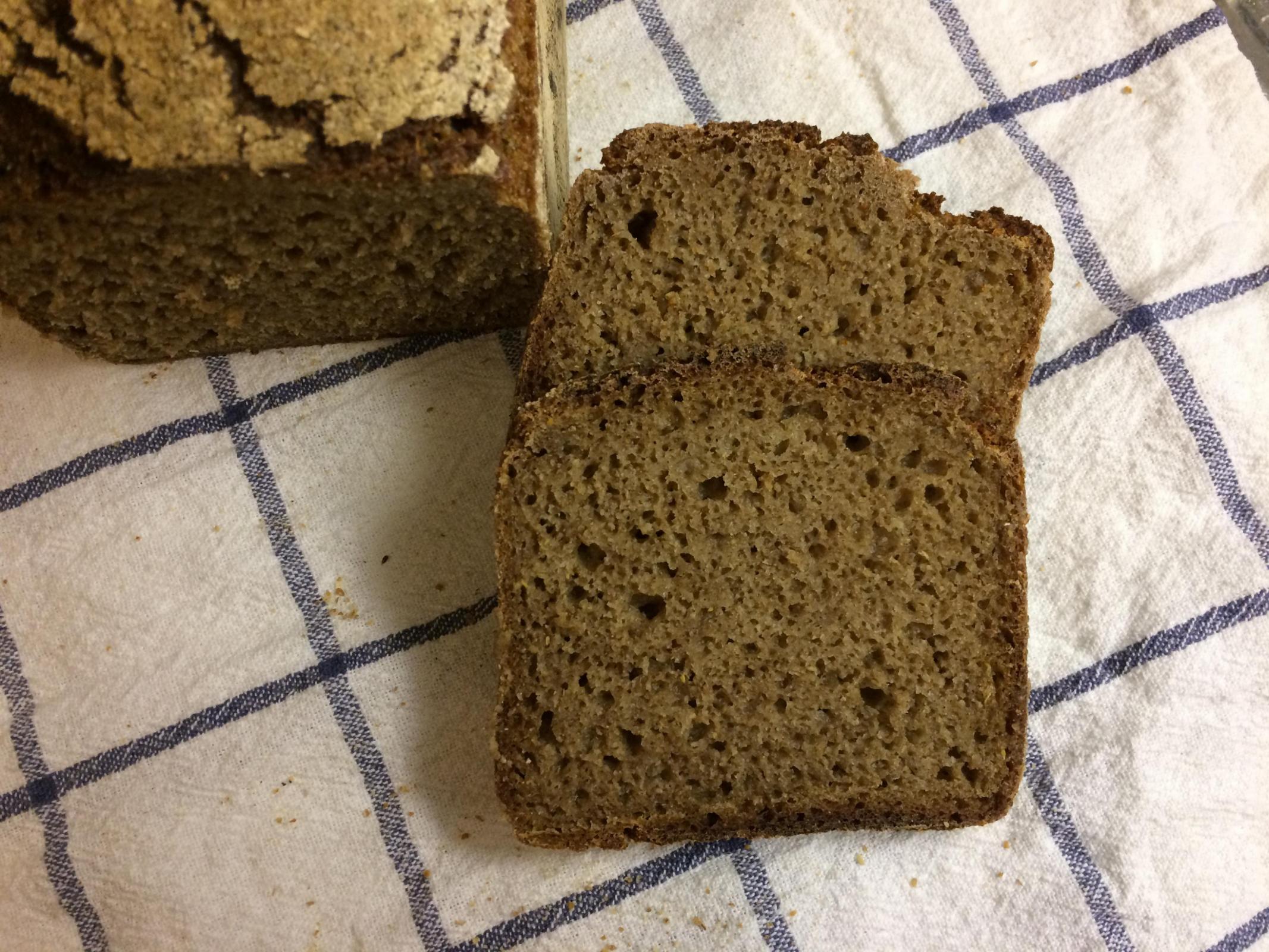 The taste seems to vary a bit from bake to bake. It would probably be a good idea to get a pH meter and experiment with fermentation temperatures to get a nice flavor profile repeatably. But over all, if I had to eat only one thing for the rest of my life, this would be it. (I've polished off at least a third of a loaf while writing this.)

But if you wanted to make the flavour sweeter, stronger and deeper, I can recommend scalding some rye flour together with the red rye malt (like in Borosinsky bread, for a recipe reference, but you can use less malt). The flavour and aroma it produces is fantastic.

I think I've tried it with flour once at some point and more recently with potatoes (as in mash cooked potatoes with water and let sit in the proofer overnight @66C). I can't really taste the difference. It does make the crumb fluffier, but at 88% hydration it's not really needed. But that does sound like a fun topic to dive into next. Thank you!

Ah, what you should definitely try though is just scalding the malt itself before using it, if you don't want to go all the way for a scalded bread. If you check the recommendations how to use it on manufacturer's websites (I searched in Russian for original sources), it's always said to pour boiling water over the red rye malt before using. Have fun anyway!

Those are really handsome looking loaves jl, I like them a lot.  Every time I see these types of rye loaves, I think to myself that I need to try baking them at some point and find out if we like the flavour of them.

Oh, you definitely should. I think at this point you've pretty much mastered wheat breads. Rye would be a fun challenge! (Although for you that probably would not be much of a challenge. It's far simpler than wheat doughs.)