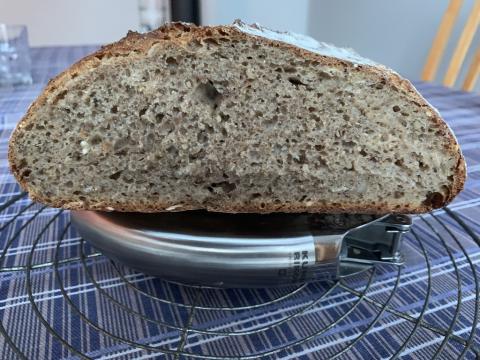 I wanted to try a slightly different tack on Overnight Country Brown. Long after I had mixed everything together I realized I had made miscalculation but things still turned to rather nicely.

I needed only one loaf, half the recipe. I used pure rye sourdough starter 100% hydration 120g, 300g white flour, 240g 12-grain mix. This is something we get at our local bulk barn and as the name says contains a number of grains and it is coarser than whole wheat flower which the recipe calls for. The mistake was to use 240g of flour rather than 140 g which would have been half of the recipe description.  Using water 340g This amounts to hydration of 67% baker’s percentage, NOT 78% as the recipe calls for.

Autolyse for 30 minutes, then salt 11g and thoroughly mixed. Two more S&Fs in the bowl over the next 3 hours and then retardation at room temp. for another 4 hours, then long retardation overnight in the fridge. Next morning nice gas development in the bowl. Dough shaped into a ball and placed in a banneton for another 90 minutes before baking in a cloche. Surprisingly nice, even moist crumb. Freshly cut one can detect the rye test but otherwise delicious.

After the long fermentation small bubbles appeared on the surface.

Again, bubbles can be seen in the dough.