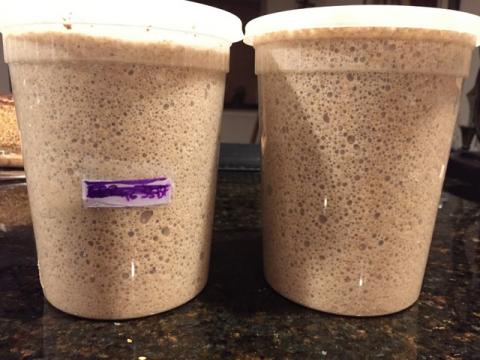 The purpose of this post is to reinforce that folks shouldn't just assume one levain will act like all, or even any other differing hydration or composition levain.

During the current Community Bake of the Hamelman Five-Grain Levain, Designing Woman (Carole) expressed concerns about building her 1st very liquid levain.  I’d pointed her to a post of mine from two years ago which spelled out what to expect, as results from feedings and builds will vary.  I haven’t baked anything in almost a month (freezer inventory and a bit of dieting) and was itching to get a new bake started.  So I thought that I’d document the following while building my levain.

Just for fun, if you want to call it that, I keep a few different levains alive and happy in the depths of my refrigerator.  Among them are:

For those who think that you can’t keep a liquid levain alive without a frequent refresh, here is proof that you can, as it was 5 weeks without a refresh for the 100%, and it is still quite alive and at my service. 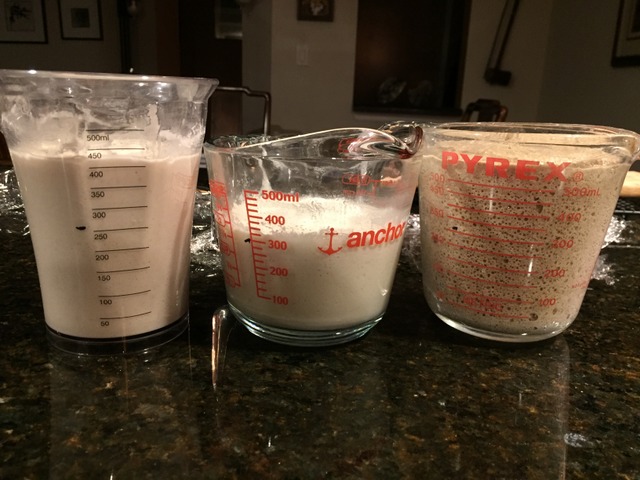 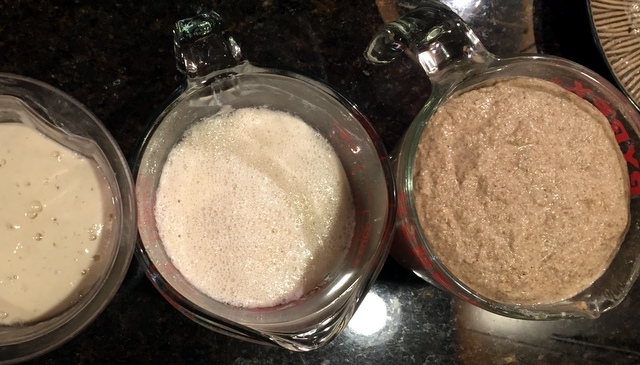 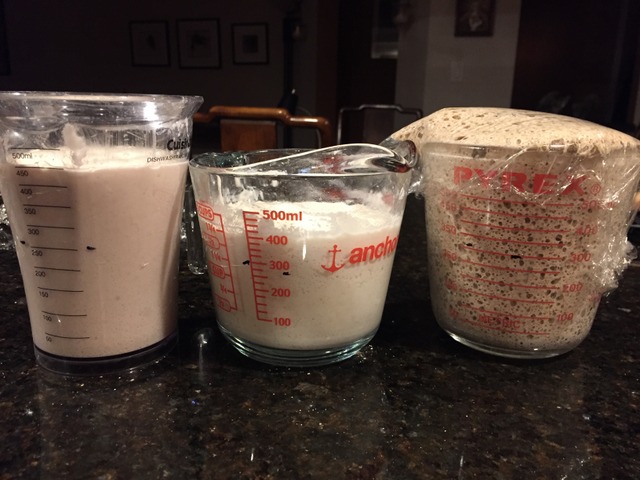 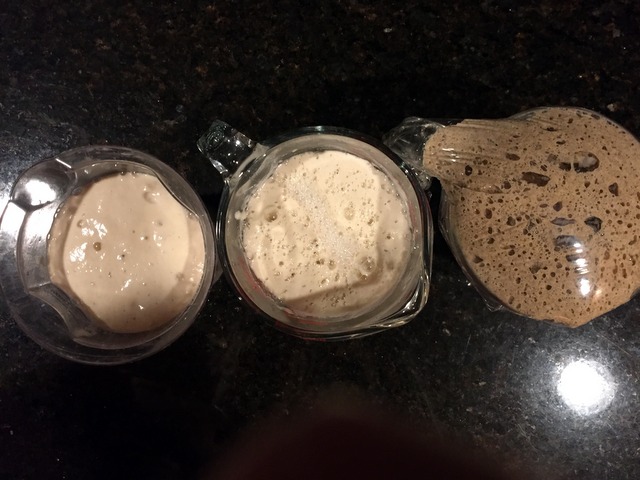 None of this surprised me as I’ve performed these builds many times before.  Rather it demonstrates that each differing hydration and flour content will yield differing results from refreshes and builds. Now it may be out there and well documented elsewhere.  But generally I find write-ups in most formula notes to frequently be lacking, in whole or in part, in certain criteria, such as:

All of these are helpful, at least to me, and as valuable to my experience as the baker as just about any other notations in a given formula.  Well, anyway, that is my personal take.

This will be kept as a cheat sheet. For the Hamelman community bake, it was indeed a concern that the 125% levain didn't grow, in spite of some major bubbling. This is reassuring.

You probably know this already, but anyway here goes:

There are two basic ways to build up a levain for a bake.

For example and entertainment purposes only.  Take a small amount of starter, feed it.  Then discard the majority of it and do a 2nd, and then again perhaps a 3rd feed.  All consecutively.

These are just for-instances of two differing methods, but not to be taken quite literally as to the amounts here.  A thousand ways to skin a cat.

My typical MO is to take 100-200g, or whatever, from my refrigerated levain as starter, add fairly warm water to it (water cools down, levain heats up), and then mix in the flour.  With the goal being to bring me up to more levain than I'll need for the next mix.  Usually one feed and I'm done.  The overage just goes back into the refrigerated goop and gets mixed in awaiting the next time.  In this regard, I seem to violate all or most norms.  Just as my baguette shaping technique is far outside the norm for the task, so is my levain build.  And ya know sumpin'?  I don't care and it works just dandy for me.

Nice post Don Baggs  Now I have to get caught up on this community bake for my wife's next pan bread!

"gold standard".  Which kinda aligns with my 2nd "option", but your method starts out with a way skimpier starter.  Sometimes if I have enough levain, and it was fed within the past week or so, I'll skip even a one stage build and just use it as is.  Maybe I'm too lazy or don't have the foresight to do a 3 stage build very often.  The goop, not just mine, once established is so resilient that it would take Kryptonite to damage it.

Although I skirted the edges of my harangue, the real purpose of the post was to reinforce that folks shouldn't just assume one levain will act like all, or even any other composition levain.  If they haven't a clue what to expect, then what they get will likely not meet their expectations, whatever that may be.  Sitting and waiting for a 125% AP to double is worse than watching the grass grow.  My gripe here is that more than any other thing, I just can't recall seeing that simple little footnote attached to a formula.  Then again, I can't recall where I left my blue argyle socks either.

Which also reminds me about folks and the window pane test.  Why would a 65% hydration mixed grain dough be expected to show the same window as an 85% bread flour dough?  As with other things, like the float test, which I haven't done since the Emancipation Proclamation, once the process works, trust that the process will continue to work - all things somewhat being equal.

Give the ankle biter a pat on the skull for me.  My little baby hit 16 the other day and the signs of her getting old are starting to accelerate.  As the Vet said a few months ago, we have an elderly dog.

I used to always do a 3 stage levain build and now it is more like a single stage thrown together.  Then the retarding of the levain began followed by the 3 stage bran levain with it being retarded and now it is a bran levain with HE whole grain single stage retarded levain as pretty standard.  As long as it doubles I'm good.  Lots of recipes call for a young levain or a collapsed one but I usually ignore that and just let it double and chuck it in the fridge for 12- 48 hours to teach it a lesson in cold hard baking!  Nothing worse than Uppity Wee Beasties (UWB's) in Lucy's book.

Lucy does't deserve it ,since she hasn't come with anything new since the bran levain, but she will get her first class baking apprentice certificate on her 15th birthday in May but she is still pretty spry although her face is going very grey.  I think she has a chance to make Chief Baking Apprentice - the highest level, on her 20th birthday and it takes a minimum of 20 years to make CBA.

And we thank you for the bran levain.  I do it every time now.

First of all, this wonderfully comprehensive post and secondly for your reply to dab.

I'm amazed and grateful to learn that you can keep a high-hydration starter in the fridge for as long as five weeks. I've got a 66% rye one that lives happily in the back of the fridge, but my go-to starter is at 100 %, and I do have a tendency to fret over it, so only keep a smallish quantity on hand.

For the community bake, I did sort of your second option (or dab's method): 12g of rye seed fed at 1:2:2. I was on auto-pilot and fed it whole rye instead of bread flour. And it grew wonderfully, as it is wont to do. Fed that at 1:1:1 with bread flour and it just sat there. Got bubbles and no growth. Then just topped it up to give 360g of 125% starter. Not very orthodox, I know, but I was getting lost in the math.

Your comment was illuminating. For some reason, I was expecting frenetic activity from the bread flour.

What you said about windowpane and float tests were also revelatory. I think my starter may have passed the float test once. And I got the crudest windowpane with this mix.

So thanks for sharing your experience and observations!

sometimes (or often) i'm lazy and more of a one build is enough kinda guy. It's bubbly, clearly alive and if the starter rises then so will my bread. I suppose it depends on how long since my starter has been fed and if I find it's a bit slow and/or it's been a while since the last feed and/or i'm working on a special loaf then i'll do a couple of builds.

But we know that different flours react differently, absorb water differently and one flour at 100% hydration will be thicker or thinner then another at the same hydration. Then there is the gluten, strong or weak? Type of gluten... elasticity and extensibility etc.

Nice write up Alan. the rye seems to be having the time of its life.