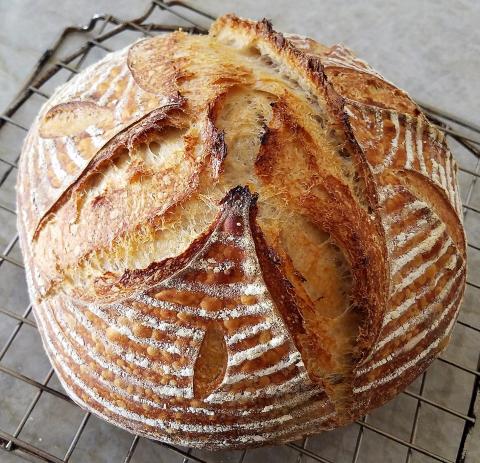 In a never-ending quest to improve, for the next couple of loaves I decided to make some changes.  The loaf above had the water upped just a bit to 73.5%, because I wanted to try making an even more airy crumb.  I also had a mix of flours 50/50 of KA bread flour and Wegmans unbleached all-purpose, simply because I ran out of BF. :-)

My schedule was thrown off somewhat because we had friends visited, decided to go out, and the dough sat for 2 hrs in a bowl after the first stretch and fold.  Still, I think it recovered fine in the end.

I tried to create a flower when scoring it, hoping it would bloom in the oven like a tulip, but I don't think it worked.  Will try again next time.

I also made the same recipe with some seeds, because I just love breads with "stuff" in them.  it came out perfectly: 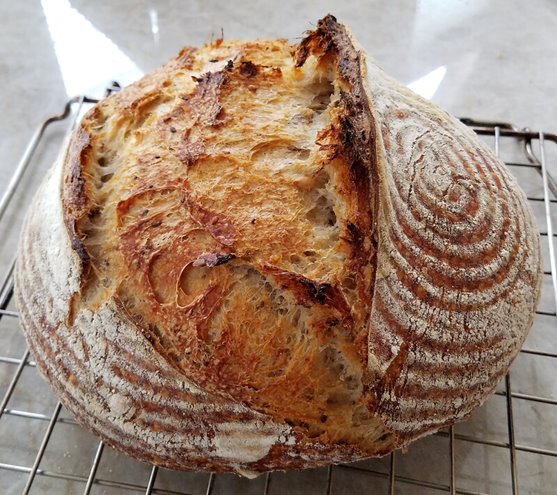 I simply added 45g of lightly toasted mix of pumpkin seeds, sunflower seeds, white sesame, flax, and chia (that's all I had at home).  Mixed it all in when I was adding salt, after the fermentolyse was done, and baked the same way. In retrospect, I probably should have toasted pumpkin seeds first, and then add the rest, since they still felt a bit raw.

The crumb looked nice, and the taste was wonderful!

It's 290g for initial autolyse PLUS 20g to dissolve salt plus 75g from levain.

Oh sorry I just misread it.   20g of additional water to take the salt.  Sorry.

And the scoring opened up so well.

it is such a confidence boost isn't when it all works isn't it.

Thank you Leslie, it is indeed!  I can't even convey the joy I felt when I removed the dome from that first loaf (from my very first blog post) and saw all that oven spring and "ear".  It certainly felt great!

Now have fun making variations on it! Trying different things is so much fun!

All this support really means a lot!

That's great that you're already doing variations on the theme - with obviously great success!

Keep having fun with experiments (and always remember that even the not-so-obviously-successful loaves are still going to taste great and teach you something).