Rye Chops Will This Work?

Song Of The Baker

Rye Chops Will This Work? 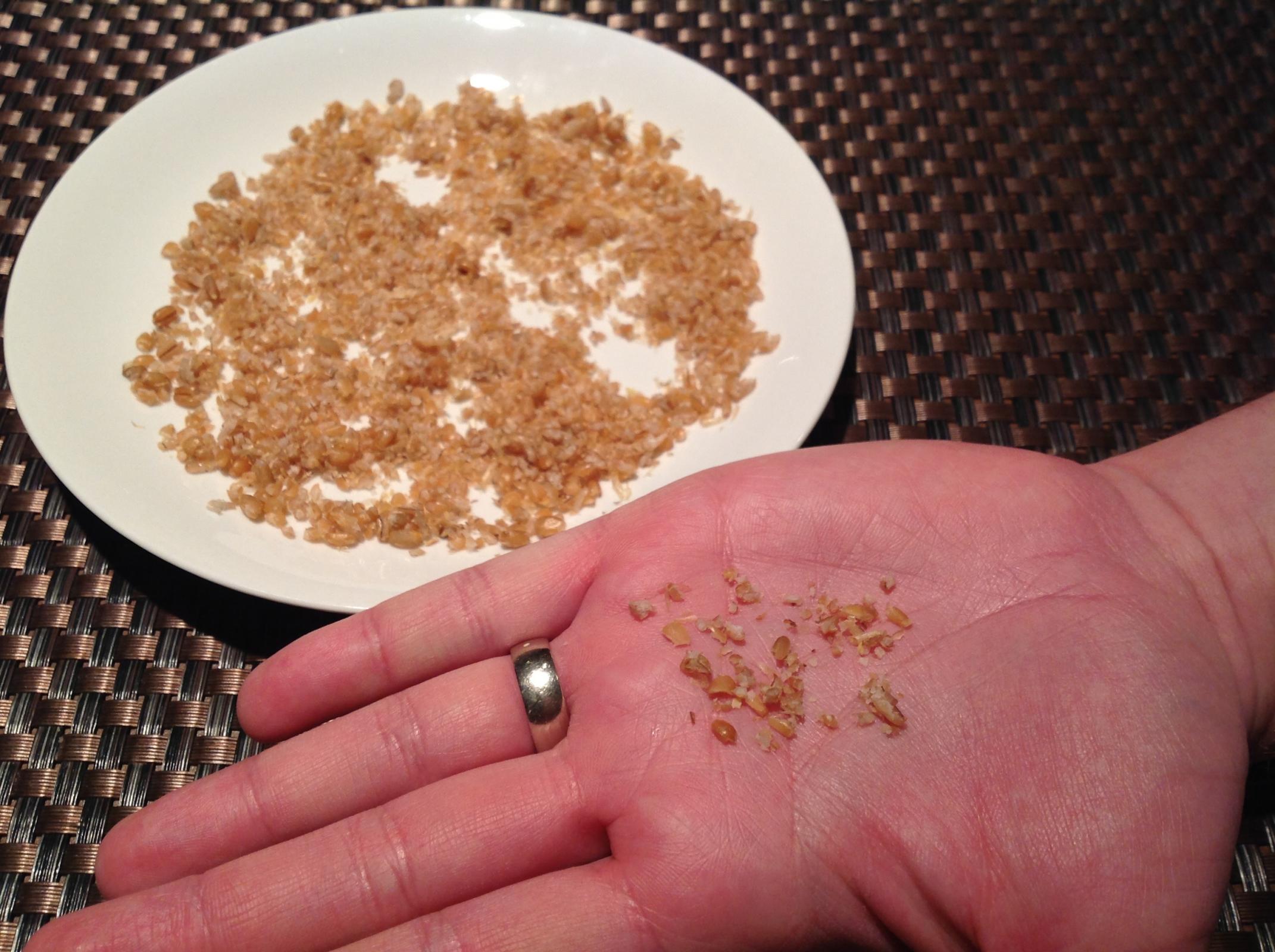 I have been wanting to make some Volkornbrot style breads but can not find rye meal or rye chops.  I have been able to find some organic rye berries.  Just wondering if this would work in producing a close enough substitute for rye chops.

After scalding/soaking the rye berries, let cool in fridge, then blitz them a couple pulses in a food processor.

I did just that with a 50/50 mix of whole wheat berries and rye berries I had left over in my fridge from last week's Danish rye bake.  Not sure how to insert photos within this post, but I think one should show up above.

Does this even resemble rye chops?  Will this do?  Any problems with this method that anyone can think of?

I'm sorry to hear you don't find rye chops near you!

Edited (I stand corrected): I've been using rye flakes in most recipes that call for rye chops, and they work brilliantly as a substitute.

Hans.  To be honest, I haven't really tried much to find some.  Only checked a few local stores.  I am sure if I looked more I would find some.  I have however seen rye flakes in bulk at the organic mill I get my flours from so maybe I will try that if you have had good results!  Thanks!

KAF lists rye chops, and the price is not too bad. However, they are currently out of stock.

I haven't dealt with this vender, but they advertise rye chops for sale: Chopped Rye 5 pounds - BulkFoods.com

Thanks for info David.  I am trying to avoid ordering products online (especially from the states as the last time I was raped by the shipping charges) but will keep that in mind if I can not find a good substitute or local vendors.

I see that you're in Langley. Choices supermarkets carry a large selection of flours and meals from Bob's Red Mill, and while I don't think they have Bob's rye chops, I wonder whether one of the stores could be asked to order some for their next resupply shipment.

Have you tried asking Anita's Mill for a list of vendors? I see their packaging in a lot of stores including Save On Foods. Or, tried a local beer making store?

I actually saw some of Anita's products in a local health store and laughed at the ridiculous mark ups.  I go directly to Anita's to buy my grains and flours, and at a good price.  I have not tried a beer store...great idea.  Thanks.

What you have in your hand looks like what I call 'chops'.  I simply take whole rye berries and run them through my mill on the 'course' setting so I get 'chunks'.  I then put them into a pot and cover them with water.  I cook them until soft and then let them cool prior to being added to a dough.  I retard all of my doughs overnight so this further softens them.

This is pretty much what you do....just in a different sequence.

Interesting that what they call chops in Europe, according to the photo Hans attached, are what we call 'flakes' here in the US.  Interesting how definitions change or mean something totally different....

You're right, Janet! I'm the one that's been mixing rye flakes and rye chops. "Roggenflocken" is German for "rye flakes". I've always thought they were the same thing... I learn something new everyday :o)

Hold on.  Janet, you say that rye 'chops' are basically rye 'flakes.'  I have seen rye flakes locally.  I thought rye 'chops' are exactly that - chopped or broken peices of rye berries.  Not flattened in the flake form.  I thought the falkes are closer to and oatmeal flake, and not the same as what one would call rye 'chops'?

What would the U.S. consider what I have shown in my hand (at least in appearance)?

No, chops are roughly chopped rye berries like you have in your hand in the photo you posted.  What Hans pictured are rye 'flakes' and are different.

Hope this clears up what I said previously...didn't mean to confuse :-)

If you dry your cooked rye chops, they become bulgarized.

Bulgarized?? Leave it to Mini to introduce me to new words!

Mini, would you advocate my process?

Throw in a some other stuff too!  No need to wait around for the good times!  Make them!

"Bulgar" really belongs to wheat but hey, the Minute rice people do it, and I've done it with kamut (and a few other grains) Anytime you boil a grain and dry it out that is a bulgar process (the grain gets semi-translucent qualities) and the dried cooked grain tends to rehydrate quicker when you need it.  Just add hot water and let it hydrate.  Do bust them up before drying or risk breaking equipment.

You can also just use your chops strait off your hand undried, nice and moist and tasty or throw in the whole berries.  They act like nuts yet bond with the sticky rye dough.  Great tasting heavy breads!

to me aren't rye flakes.  Rye flakes is where they made oatmeal out of rye instead of oat :-)  Rye chops are coarsely chopped rye berries.  Rye meal is more finely chopped but not so fine as a flour - it is like coarse corn meal.  I make both of mine in the Krupp'c coffee meal.  If you have rye berries you have: chops, meal,and dark rye flour.  With the proper sieves, you also have medium and white rye too - with left over bran and germ for Toadies!

Bob's Red Mill carries a Pumpernickel  Meal that is essentially cracked rye that I'm sure it will fit your needs. 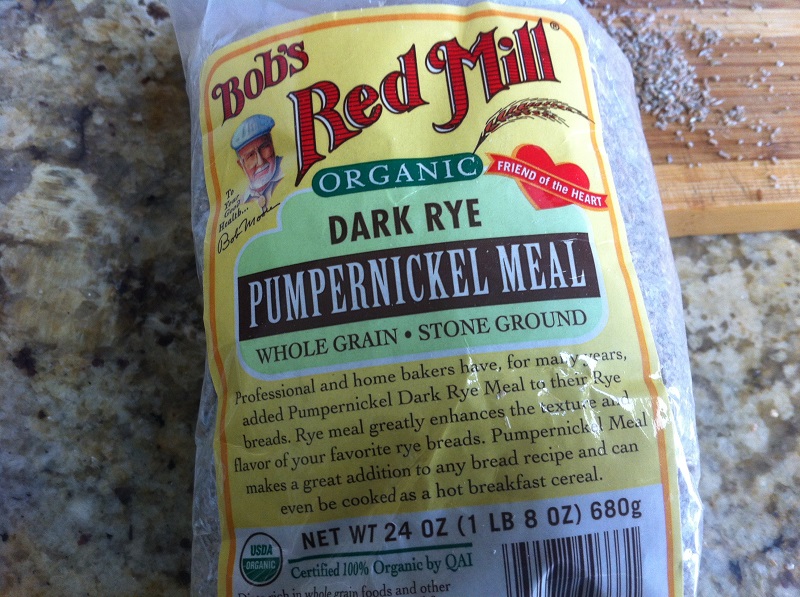 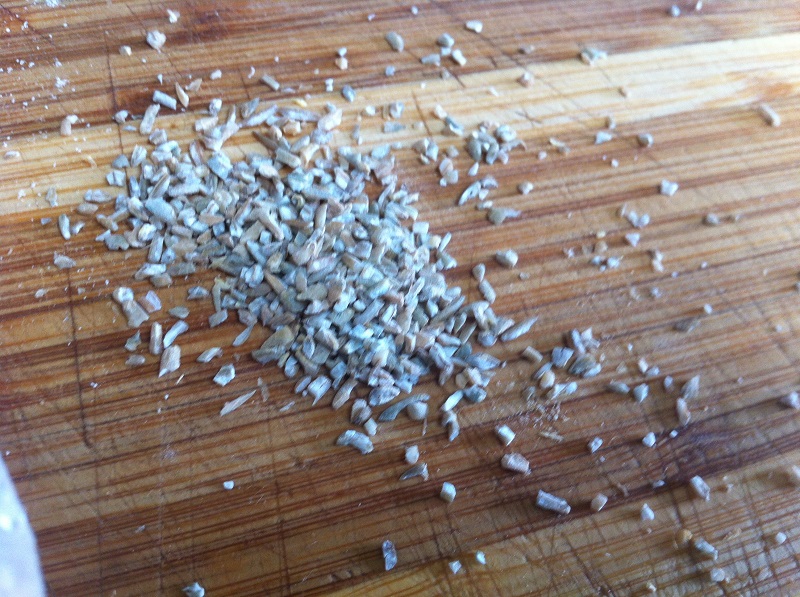 The health food store I get most of my baking supplies from will order it for me if I buy a case ( 4 bags @ 680 grams per) at a time. Bob's *site* lists it at $11.69 US per bag, a little pricey, but if you can order it through one of your local stores you should be able to avoid any shipping charges as it would come in with the stores regular order from the distibutor. At least that's how the store I deal with does it and I'm guessing I'll pay between $50-$60 and have a good years supply of the stuff when all is said and done. Hope this helps.

With a little further searching I found rye grits/meal at Galloway's Specialty Foods with a waaay better price of $2.49 per kilo!

Thanks for all your help everyone.  I have taken all the advice.  Tomorrow I will be trying a Vollkornbrot loaf with my chopped up soaked rye berries and will let you all know how it turns out.  Unless of course it turns out to be an ugly brick...I will then alternatively not let you all know about it and quietly kick it to the nearest ditch.

a beautiful 100% rye and one that is a brick is eye of the beholder :-)  But  Mini's seeds on the bottom and side of the pan with a domed top sounds way better than my door stop with bran on top!  I say leave it alone for 32 hours.but 48 is better they say - I've never managed that though.and don't forget the Korn either!

about your toes.  :)  Wrap tightly after it cools completely and leave it alone for a day or two (if you can.)  I like to rub the pan with butter and stick sunflower seeds all over it before spooning in the dough.  Round the dough top, don't press it flat for a beautiful brick.

I let Vollkornbrot cool for about 30 minutes out of the oven and out of the pan.  I then wrap it in multiple layers of linen for another 24-36 hours of cooling.  This will give you fairly even moisture distribution through the loaf and prevent a really hard crust.  This is also the one and only bread that stores well in the refrigerator after complete cooling.

Ok well, I baked the vollkornbrot but I think I made a huge mistake.

I boiled the whle berries, then patted them dry, let them cool, then ground them up as like my photo above.

The problem I think that happened was the extra water that they absorbed in the boiling process did not mesh well with the recipe I used.  The dough in the mixing stage was VERY wet, like wet concrete.  Similar to a danish rye dough during mixing stage.  I added a bit of flour but it still was not anywhere near to the dough consistency I have seen on videos of vollkornbrot.  After coming out of the oven the tops sank down quite a bit.  This I don't mind so much, but I was a naughty boy and out of curiosity, sliced an end off.  The inside is very dough like soft and wet.  The dough reached 215 degrees after baking but perhaps it needed more time?  Maybe it will set up after a couple days in the fridge?

Either way, I am scared.

On a positive note, my never tried before freshly milled organic bread flour seems to have done wonders for my Tartine dough!  They are in the fridge right now and am positive for tonight's bake.  Will post results.

You better be scared since so many told you NOT TO CUT INTO IT FOR AT LEAST 24 HOURS  :-O

I never consider any bread a failure anymoe because I always learn something as you will from this loaf.

I am not the right one to comment on this particular loaf because I have only baked it once and it was a long tme ago.  I will keep my typing fingers silent and wait for the rye experts to comment and I know i will learn from what they have to say too.....always do.

So thanks for sharing your process here so I can learn along with you. :- )

I love freshly milled flour too.

Thank you for your kind words Janet.  I will be patient and wait 4 more days till I try another slice.  I have a feeling the dough inside is way too wet to recover.  Too bad as I baked two loaves.  I am hoping they correct themselves in the fridge.

As for the freshly milled flour.  Let's get this straight.  I did NOT mill it myself.  That is a line I don't know if I will ever cross, no matter how much into baking I get.  Perhaps if I get a free home mill as a present, then I might cross over to that side.  I am lucky to have a local organic mill not too far away from my home.  I just pick up large bags of them and it makes me a happy boy for a while.

Thanks again for the support!

Bet it makes the millers happy too.  They need your support and you are lucky to have them so close by.  I am a big believer in supporting local businesses - especially a mill that mills organic flour!

The first Borodinsky I baked was too wet in the center too.  I over corrected on the second bake and got bricks....So now I have two baking methods that I know don't work out so I figure my 3rd attempt should be perfect :-) Nobody is holding their breath...or we would all be dead :- O

I'll trade you your disaster for mine?  I made Avocado Rye Crackers today and they could've been better.  > smile <

Avacado Rye Crackers???  Just as I am feeling confident on my creativity in baking, you geniuses come in and up me once again!  Those sound amazing.  I am sure they are better than you say.