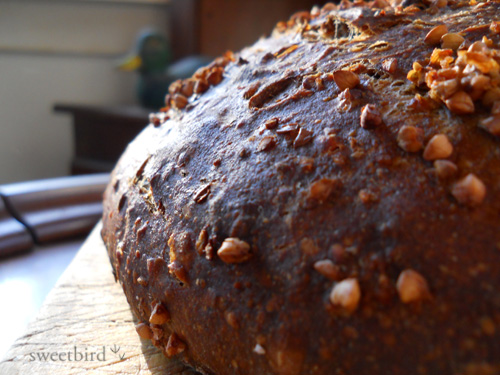 While reading the article in New York Magazine on artisinal bakers in New York City that I posted in the forums yesterday (http://nymag.com/restaurants/features/new-wave-breads-2011-12/), I saw the photo of a buckwheat-pear bread and was reminded of this one that has become a favorite in our house. It's a buckwheat-apple bread dreamed up by a Swiss baker/blogger and posted on yeastspotting a few years ago. The blog post was so charming that I had to try it immediately. I have loved it and baked it many times since.

Here is the original blog post that captured my imagination:

I've made some minor changes based on what I have available. Here is the formula that I use: 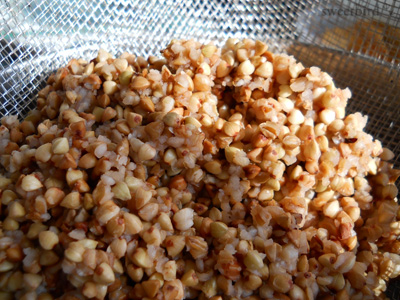 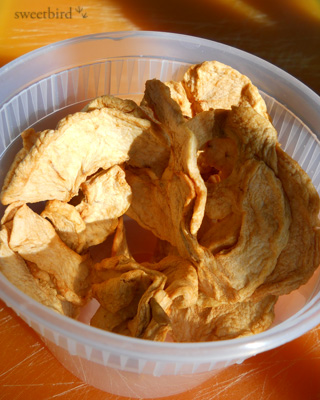 Mix the ingredients for the liquid levain and leave at room temperature for 12 hours.

Pour 1 cup of boiling water over the whole buckwheat and let it soak for 10 - 15 minutes, until cooked through.  Drain well and set aside.

Mix the liquid levain, flour, vital wheat gluten and cider and let it autolyse for 15 to 30 minutes. Check the consistency and adjust as necessary; you’re looking for a tacky but not sticky dough. 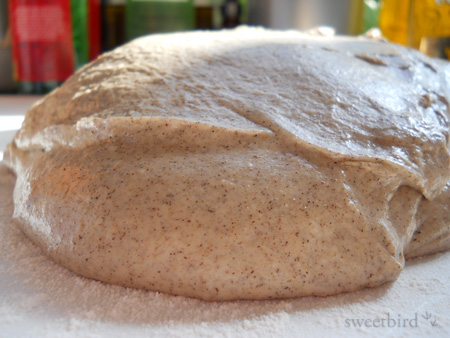 Mix the final dough, but don’t add the apple chunks and the buckwheat yet. I processed for about 6 - 7 minutes on medium speed in my KitchenAid. At the end, mix in the apple pieces and about 2/3 of the soaked buckwheat groats. The rest are reserved for the top of the loaf, if you like (if not, go ahead and add them all to the dough). 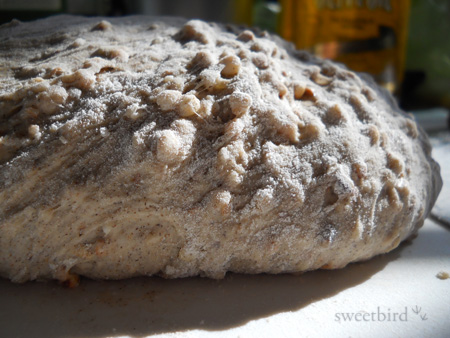 Let the dough ferment in a warm environment (I kept it at a temperature in the mid-80sF) for about 1½ to 2 hours, with two folds at 30 and 60 minutes. The original recipe calls for one fold at 40 minutes, but I thought my dough needed more. I let it ferment about 2 hours.

This dough weighs about 1,050 g, and I bake it as one large hearth loaf. It can be divided into two smaller boules if you like. Bench rest and shape, and start your oven and stone preheating to 430°F at this point. I found that the final rise was fairly quick -- about 40 minutes. In fact, it took me by surprise and my oven wasn’t quite ready, so I ended up over-proofing slightly.

I used the dough ball trick that I mentioned in my previous post. 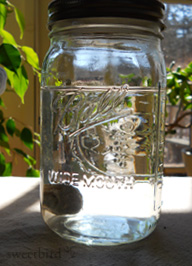 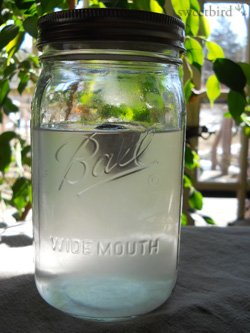 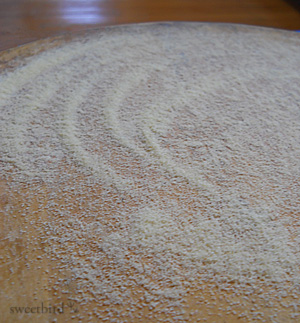 Bake the loaves on a preheated baking stone with steam at 430°F, checking and turning at around 20 minutes and lowering the temperature if the loaves are taking on too much color. I turned off the oven when the loaf reached an internal temperature of 205°F and let it sit on the hot stone with the oven door ajar for 10 minutes. 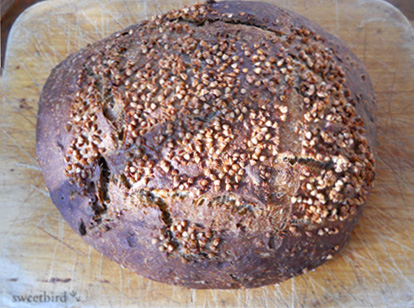 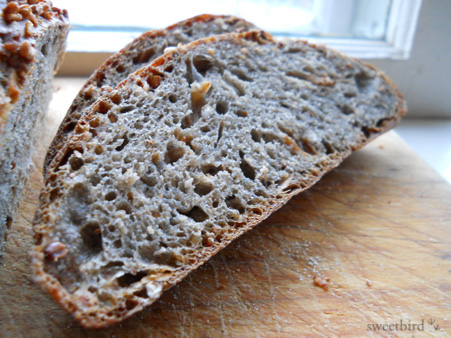 I use a wonderful hard cider from my part of the world, the northeast U.S.  It's Woodchuck Hard Cider from Vermont and comes in a 355 ml bottle, which is just exactly the amount that is needed for this bread. About one-third goes into the levain and the rest is used in the dough. I use it at room temperature. 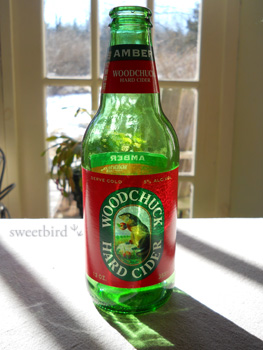 The flour I used in this loaf (besides the buckwheat flour) was King Arthur AP, even though the formula calls for bread flour. I would have been better off using the Sir Lancelot I had, or something else to offset the weak buckwheat flour, but even so this came out very well.

I use a raspberry honey from a local beekeper instead of the pear honey in the original formula.

This bread has a deep, somewhat nutty and subtly sweet flavor. It is outstanding as toast. I tried to capture the extra depth of color that it has when it comes out of the toaster. It's spectacular with butter and marmalade or with cheeses. I encourage you to try it! Thank you to the sweet baker from Switzerland (who doesn't seem to be blogging any longer, sadly). I'm grateful for this very special bread. 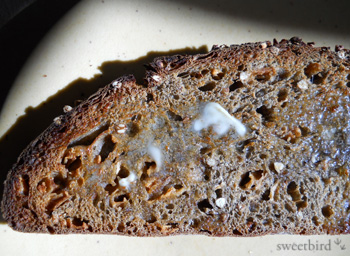 I'll send this back where it started from, to Susan's yeastspotting:

Beautiful looking bread....so how much apple do you taste in the final product?

Thank you, island66. It's interesting how the flavors blend in this bread. Nothing jumps out at you. The apple flavor (to me, at least) sits nicely in the background. It's not a sweet bread at all, and not fruity; just deep and rich in the nutty flavor of the buckwheat, balanced by the subtle backdrop of dried and fermented apples. And then you get that very teensy hint of raspberry from the honey. It's not a heavy bread either, in case that's a concern for anyone.

What an interesting flavour this must have and the toast looks to die for :) How were the buckwheat groats in the crust? Not to hard on the teeth?

I don't really drink much except a glass of nice red on occasions ... I know, an Australian non-drinker! ... means I am not to be trusted apparently :) ... so the use of ciders and lagers really goes way over my head. Wierd as I know beer and bread making go hand-in-hand. Anyway, thanks for posting this great looking bread.

Thank you, Phil. The toast is utterly delicious! I've baked this both ways -- sometimes with the soaked groats on the crust and sometimes without -- and I like both. The groats get a little crunchy, but not alarmingly so. It would be important to make sure that they're soft to start, though!

That is funny...an Australian non-drinker! But then I guess I go against type, too. I don't suppose I'd be a poster child for a typical American. :-) Not that there is such a thing! Anyway, the hard cider is perfect in this bread and is worth a try. I think hard cider is used in Normandy Rye also, which I'd like to try.

This bread looks wonderful!  I have some buckwheat groats sitting in my cupboard that I haven't know what to do with until now.

I am wondering if you have ever tried making it with fresh diced apples instead of dried one?  My family loves chopped apples in breads and I am thinking this recipe would be perfect.

By the way, lovely pictures too :-)

It is wonderful, and very unusual while not being odd or startling to the palate. My husband and I really love it. He has suggested making rolls out of it, which I might try the next time I make it. I hope you take those groats out and give it a try!

I haven't tried it with fresh apples. It would result in a very different bread, but you and your family might love it that way. My instinct tells me that the differences would be first in the hydration, because the fresh apples contain so much moisture and dried apples have almost none, and also in the flavor. I think you would end up with a much more pronounced apple flavor. I'd love to hear how it comes out if you try it that way!

I reconstitute dried apple slices in apple cider to add to my fresh apple pie to enhance the apple flavor of the pie.  Fresh apples  just aren't as flavorful as dried apples reconstituted.  I think it is like dried mushrooms are much more flavorful when reconstituted than frexh ones.   I wonder how ths bread would be by reconstituing dried apples with the hard cider sourdough starter mix and some of the water........

combo of flavors.   Interesting that even the levain is made with hard cider.   I bet the yeast didn't know what hit it.  -Varda

sweetbird.  I really like this combinbation and it would be good with dried pears too.  Your bread always looks and photographs so well, as opposed to mine which seems quite camera shy.  Never cooked bread with buckweat but love the pancakes and soba noodles made with it.  I saw some at Sprouts the other day and now wish I had picked it up.  I'm going back there today and will see if they have any left.  Once again a very nice bread and ingredient combination!

Thank you for your nice comments, dabrownman. I think you might really like this if you like buckwheat soba noodles and pancakes. I like them as well, so our tastes are probably similar. I definitely want to try this one with dried pears, too.

One thing to keep in mind about buckwheat is that it is a weak flour and it needs backup from something with a bit of muscle, like bread flour. I happened to use AP flour in this one and have no complaints, but I think a stronger flour is better.

I'll look forward to hearing how yours comes out if you decide to give it a try!

All the best, Janie

They did have some  buckweat.  It is expensive so I only got 2 pounds.  Forgot to get the dried apples though :-)  Have to go back soon enough anyway.

I would just forget to bring it or lose it somewhere on the way to the store.  Better for me not to waste valuable baking time making eventually worthless shopping lists - plus I get to shop twice as much as normal folks my way :-)

I think it is more like madness in my method :-)

i tried to make this bread two times and my dough turns out very sticky, and it doesn't rise enough.

I need to mention that I don't have mixer, so i am kneading it with hands, and that i was using rye flour levain.

I was following all the steps, but i cant't figure out where do i go wrong.

Do you maybe have some advice?

I'm sorry to hear you've had some trouble with the dough. I'm no longer making bread (I've gone wheat-free) but it was one of my all-time favorites and was very reliable. I miss it!

Here are some thoughts:

- Remember that buckwheat flour is very weak and needs the help of a strong flour like bread flour, so make sure you're using a good strong flour. The dough won't rise well without it.
- For the same reason, don't forget the extra vital wheat gluten.
- I think this loaf isn't the best candidate for hand kneading because of the inherent weakness of the buckwheat, but don't give up. You need to really develop the gluten in the other flour, so give it a longer kneading time and don't worry about adding a little extra flour to counteract any excessive stickiness.
- Lastly, try it with a white flour levain. It's a small amount, but you're adding another weak flour when you're adding rye. You need all the gluten you can get in this one!

I hope that helps and I wish you success. This bread is worth the effort!

All the best,
Janie