**second update: I have included a picture of the speculaas rolls as properly formed. In my first attempt I tried to make Levine's rolls look like stars more than flowers, but actually, the round shape is much nicer, I think!

**update: there is a minor mistake in the recipe and video, that I have corrected: the 30 gr. of lemon zest in the original recipe is meant to say: candied lemon zest" which has a lot more moisture in it and is a lot less "lemony" When using pure zest; use about 2 lemons of zest (which is still a lot, but the recipe is benefiting from that!) Sorry for the hick up! Why do we crave certain foods or ingredients on particular moments in time? A turkey tastes like a turkey in July, but still we prefer to eat the lot of them towards the end of November. A raspberry, for instance, is best eaten when it is around, of course... I understand my craving when that time comes, but why have we made a turkey seasonal?

Here in Amsterdam, the shops are filled to the hilt with speculaas in all sorts, shapes and sizes the year round. Yet, it is when winter rolls in that the Dutch start to consume it by the bucket full. On occasion I will treat myself to a nice box of speculaas cookies in the middle of summer (from a real bakery rather than from the supermarket of course), but it's not until the "oliebollenkraam" has appeared on the bridge around the corner and in our back yard the "winter tree" (as I call it, 'cause I have no clue what sort of tree it is) starts to bloom, that my speculaas consumption suddenly goes through the roof. 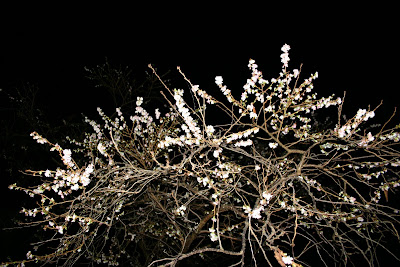 "Tradition" I hear you say; we eat turkey for Thanksgiving, speculaas when winter is upon us and Pan de Jamón for Christmas (if you would be Venezuelan or married to one).

So... we are okay with more "summer" in our food in winter, even if that means the strawberries need to be shipped in from halfway around the globe. But we don't want to be remembered of winter in the middle of summertime, even if all ingredients are readily available. I mean; I eat summery salads in December, but never oliebollen in full blown spring.

We all have that bottle of liquor in the cabinet that tasted so exquisite on that little terrace in Rome, but didn't quite hit the spot on a dreary autumn afternoon back home. I guess it is indeed tradition, or maybe more accurate; a ritual.

Speculaas spices are very much comparable to allspice in the U.K., or Pumpkin Pie Spice in the U.S. It's warm, brown, comforting and forgiving. Eating it is almost a message to our bodies to be prepared for things to come. Smelling it coming into the kitchen, makes you forgive the hailstorm that just spat its icy daggers in your face on the way home.

This recipe is put together by my much admired baking friend Levine. It shot straight to my comfort baking top 3 because of its original flower shape and the great taste combination of almond paste with a royal zing of lemon zest. It makes the end result less sweet than a lot of speculaas/almond paste recipes that are floating around. All of you Dutch readers, please follow the link for the Dutch recipe on Levine's blog, after watching the video of course :-)

Put the flour, sugar, speculaas spices, yeast, salt and the clumps of softened butter in a bowl and mix with a wooden spoon. Add milk and eggs, mix together, and knead with a dough hook for 10-15 minutes to develop a supple dough. The dough can be a little sticky.

Transfer the dough to an oiled container, making sure it is covered all over. Cover and let the dough rise until doubled in about one hour.

Turn out the dough on a lightly oiled work surface. Divide the dough in 15 equal pieces and shape them into tight balls. Leave them to rest for 15 minutes.

Flatten the balls of dough in the palm of your hand or with your rolling pin. Put a ball of almond paste in the center and fold in the almond paste, making sure to pinch the seams well.

Put the ball seam down on your working space and roll out again carefully, making sure it keeps its circular shape and the almond paste is spread out evenly. With a dough cutter make eight slits in the dough, leaving the center in tact. Then pair up two petals, twist them so that their sides touch and the almond paste is showing as a swirl. Pinch them together on the bottom.

Divide the rolls on 2 baking sheets, placing them with enough space in between. Carefully flatten the rolls on the baking paper or baking mat. Cover well with oiled cling film and leave to proof until almost doubled in size, in almost an hour.

Bake the rolls in the middle of a preheated oven for about 15 minutes until golden on 180° C. Put them on a rack to cool.

Mix all ground spices together and store in a small airtight container.

There are many varieties and tweaks out there, I really like this one. As long as the base is the same, you can tweak your speculaas spices, just the way you like it.

Enjoy! Please feel free to comment and subscribe if you want me to keep you updated. Also I want to ask you to endorse my growing BreadLab initiative on Facebook; every like gets me closer to realizing a 6 episode "breadomentary", chasing the beast bread the world has to offer. Thanks in advance!

I can see why they are so popular...the smell alone of these fancy shaped little rolls baking must attract the crowd.  I will bake some of these up...soon I hope.  BTW, I liked the fast film version of your baking them.

When making them take into account that the 30 gr. of lemon zest is "candied lemon zest" in the original recipe. When using frsh rind, I would put less; around 15-20 gr, depending on how lemony you like it! I'm crazy about these rolls, they are so original!

thnx for your nice words! Those look really delicious - and what a great video too. And there was me thinking my Christmas baking was pretty much finished... time to buy some more marzipan, I think! Thanks for sharing the recipe.

Edit: I couldn't resist trying them, but they didn't turn out as good as yours, alas! Still pretty tasty though... http://www.thefreshloaf.com/node/26262/my-attempt-levine039s-divine-speculaas-rolls

Those look so tasty! Next up in the BreadLab are stollen (of course) by the same maker as the speculaasbroodjes, and Venezuelan Pan de Jamón with "hallacas". Hope to inspire you more :-)

Hi freerk,
Thank you so much for posting about these beautiful, spiced speculaas rolls.
The shaping is so very beautiful and I can only imagine the flavor.
Wishing you the best for the holidays,
:^) from breadsong

They are perfect for me; not too cakey, not overtly sweet and with some of my favorite spices!

Hi freerk,
Thanks so much for this recipe; I enjoyed making these very much, as part of Christmas baking this year.
The rolls are incredibly, wonderfully delicious!
:^) from breadsong

whosinthekitchen
December 6, 2011 - 5:37am
You always add something wonderful

to my 'gotta bake this' list, Freerk!  Thanks and a Festive Merry Christmas to you!

I now have to get a net book for the kitchen so I can view the video so I can actually make these things, I will never remember other wise! They look devine, and I bet they taste the same, and of course scent the air with that lovely spice, I will bet they do make you forget the horrid weather.

they are really tasty, so the netbook will be worth the investment :-)

have to dig it out and find someplace safe to put it so I can view the roll making as I attempt it. Probably won't make as nice a flower as you but it will at least be tried! I will bet they taste outstanding. I have some Speculaas cookies here, they are tasty but of course are not like homemade, but they do give an idea of the flavour one is looking for!

He's a speculaas, marzipan lover.   Thank you ever so much!

Great to give you some inspiration. I hear more responses talking about marzipan, whereas there is almond paste in the recipe. For me those are very different.... the best result is with almond paste rather than marzipan, which is much finer... Just in case; here is a nice home made recipe for almond paste. In my video I form them to look rather more like stars than the original flower. To make it look more like a flower: just pinch the "dough-petals" on the bottom and leave to proof; the "petals" will proof more round, less pointy, as seen here in the original recipe.

These look and sound delicious. I only discovered Speckulatius biscuits (cookies) this last Christmas – I’m munching on one now – and to create a bread version would be marvelous.

I shall make these very soon and report back. (I’d make them today, but I need to get the proper spices first.)

I’m vegan, so I won’t be using any egg with the marzipan – I’ll probably mix in a little Benedictine, since that’s what I have open ATM!

Thanks for the detailed instructions, the video and the Speculaas spice ingredients!

The egg is in the almond paste to make it a little smoother to work with, so any vegan alternative (Benedictine sounds just fine ;-) should work as well. Don't take too many alcoholic alternatives though ;-)

Have fun making them, they are indeed wonderful rolls.

I am just recovering from the holidays and all of the extra activities....catching up on posts I had 'put aside' to visit later and this is one of the ones in that build up.

I love your creativity with BreadLab!  I have watched other videos you have done but I think this one is my favorite :-)

I have some almond paste left over from all of my Christmas baking and these will help me use the extra up plus what a tasty treat I will get in the end!

Thanks so much for the video and the post.

The maker of this recipe is all smiles on how this roll took off, both here as on Facebook. Deserved, because it is so simple, honest but yet so original.

Thanks for your compliments on the video! I really enjoyed making this one.There's going to be more "stop-motion" in the furure I think.

Are you going to make a pic and show us how they came out?

Have a good week!

p.s  I put up a new picture of how they are supposed to look like when formed!

I just saw the new picture...hope mine turn out as nicely...

I don't do photos...I have tried and it just makes me too nervous...all the electronic gadgets are still foreign to me and my nervous system gets over done when I try messing with it....so I leave that part of baking to the ones here, like you, who have a knack for color, light and motion....

I will let you know how they turn out though!

Just reporting back on my attempts at these rolls. There was a lot of leakage of marzipan as the pic shows. I need to revisit your video and see where I'm going wrong with the shaping:

(Look for Thursday the 12th of Jan)

They were tasty enough, and a lot of fun to make, but definitely a work in progress.

I made these for Christmas and they were a big hit. They also turned out well, thanks to the video on how to shape them. This will definitely be in my keeper file!

Thanks so much for posting,