Last week, I baked Susan from San Diego's “Original Sourdough.” My description can be found at:

Susan's formula for her “Ultimate Sourdough” is described in her blog, here:

Susan's formula makes “one small boule.” I doubled the recipe. I wanted to make two boules, one to bake after overnight cold retardation, as I did with the “Original Sourdough.” I also added a bit more WW flour than Susan called for and used a different mixing and fermentation approach.

The retarded loaf was baked the next day. It was allowed to proof in a warm (75F) place for 4 hours. It was baked covered for 12 minutes, then another 15 minutes uncovered. It rested in the turned off oven for 10 minutes. 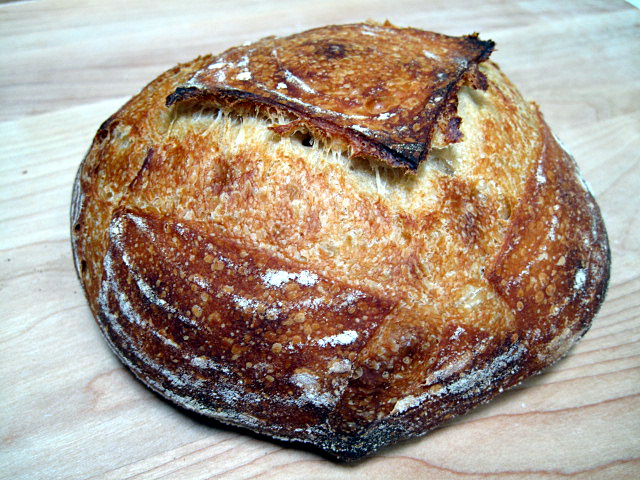 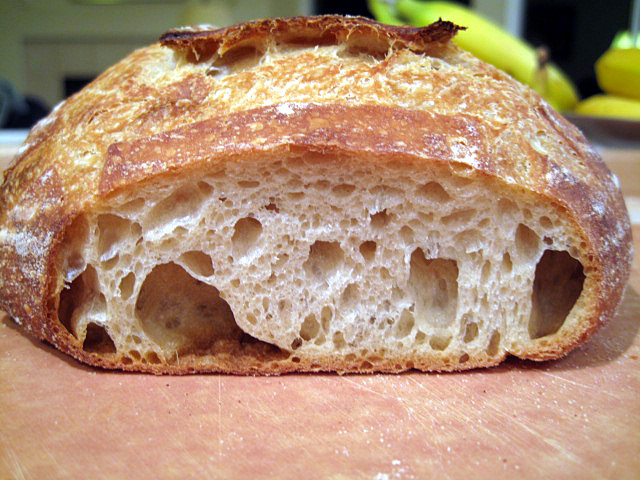 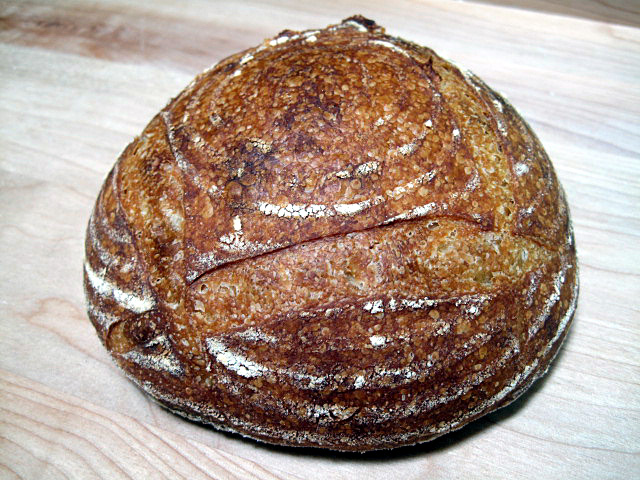 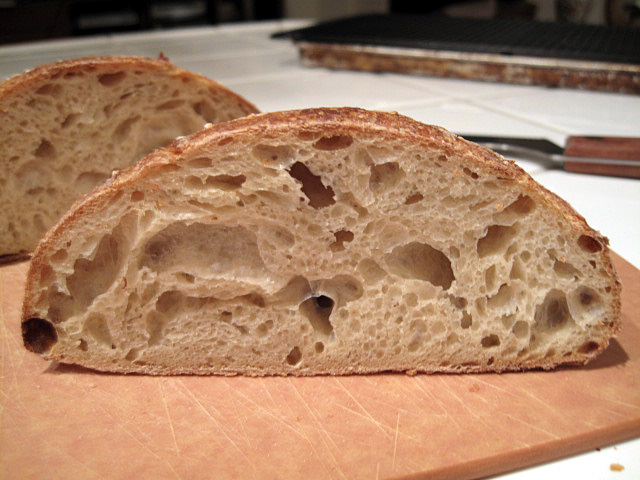 The boule that was baked without retardation was very similar in taste to the one I had made using Susan's “Original Soudough” formula. It had a nice flavor and was mildly sour. The sourness increased the next day, as expected. The crust was relatively thin but crunchy the first day and chewy the second day.

The boule that was retarded had a lot less oven spring. I think it was proofed more fully than the other had been. It was a bit more sour than the un-retarded loaf, as expected, but less sour than the “Original Sourdough” retarded loaf was. Tasted 5 hours after baking, the whole wheat flavor was coming through. I expect this to mellow out by tomorrow.

Bottom line: Both of Susan's sourdoughs are wonderful. I can't say I prefer one over the other after making each once. I expect I'll be making both regularly.

It is always such a pleasure to read your concise reports and see your wonderful pictures. c

David, these are such lovely, very tasty looking boule's...Ive enjoyed following your quest!  I could amost the bread!  The photos are great!

What a nice photo essay on these two breads. Thank you for sharing your results.

Having made both the original and ultimate Susan's formula many times myself, I am wondering about a few fine points. If you will permit me to pick your brain just a little.

First; For me, retarding has never produced the same crumb as baking the same day. In your image of the retarded loaf, the hole structure is less vertical and the crust is noticeably lighter on the bottom. Also you can see that it's more dense near the bottom. Assuming that the stone/oven was preheated roughly the same for both breads, the dough must have been cooler near the bottom and less active.

Since the brotform exposes the bottom of the dough to the cold air unprotected by the coils in the refrigerator, perhaps the dough becomes somewhat cooler on the bottom than the top. I'm wondering if the dough were rested on a warmer surface prior to baking if there would be less of a difference in the crumb results of the two breads.

You can clearly see that the dough cooled the stone in the retarded version more than the non retarded and that the temperature didn't recover. Perhaps warming the counter top stone with a pan of hot water prior to placing the dough on the counter would warm the dough a little more on the bottom.

This is really picky admittedly since both boules are stunning. This is something I have been struggling with myself for some time so I hope you will humor me here David. What do you think?

Good observation! I noted the difference in crumb between the retarded and non-retarded loaves with both the "Original" and "Ultimate" SD's. I'm really glad I did these comparisons. I'd never remarked on this difference before.

Yet, while the difference is there, at least to us nit pickers, all 4 loaves had really nice, open crumbs. I would not say it detracted from the quality of the bread.

I cannot recall reading anything about the impact of cold retardation on crumb structure in any of my books or online. This would be an interesting question to put to one of the gurus (Reinhart, Hamelman, Glezer, Suas).

One thing I have observed and commented about is that my oven stone drops in temperature remarkably fast when the dough is loaded. I have used my IR thermometer to monitor stone and dough temp and was surprised at the drop in temp. Pre heating to 500F does seem to be a way to partially offset this effect.

Eric, by chance are you an engineer?  Your observations are amazing - you really have an exquisite eye for the finer details of baking and when I read some of the exchanges between the really advanced bakers here, I'm impressed that the more I learn, the more I discover I don't know.

David, I browsed through my photos of the sourdoughs I've baked because I always retard them.  I didn't find any photos showing a marked increase in crumb density at the bottom of the loaf and wonder if the length of the proof before baking a loaf that has been retarded has any effect.  My retarded loaves are in the oven within an hour of being removed from the refrigerator.

All these tiny details...

My experience I think is similar to Lindy's. I get best results when I cold or cool final proof long enough for loaf to be ready to bake, and bake it cold, which I think gives better oven spring, as long as the dough is fermented long enough at the cold/cool temp (does that make sense?).  I did a little test this past winter and wrote it up in my blog here on various methods of bulk fermenting vs. proofing, with comparative crumb shots.

Thanks for the link. I think your experience is very pertinent.

The loaf I cold retarded (at about 40F) was then proofed, not at room temperature, but in my microwave in which I had heated a mug of water. The temperature was about 78F. So, this is comparable to the loaf of yours where you pushed proofing.

I don't have an environment that is cool but not cold. In the refrigerator, my loaves do not expand much at all. Your experience suggests 50-65F may be ideal temperature for cold retardation. Refrigerating loaves and then letting them proof at room temperature (68-70F) has worked next best for me.

I guess the take away lesson is:

1. Don't push the proofing of retarded loaves in a warmer environment.

2. Reconsider buying a small refrigerator that can be set at 50-60F to use for cold retardation.

I need to look at Suas and Hamelman regarding cold retardation. Maybe they have something to say about this issue.

Both loaves are real beauties: gorgeous color, artistic scoring, and such open crumbs. You are truly a master SD baker! While my two Hamelman SD loaves were not as beautiful as yours, my experience was the same: crust and crumb of un-retarded loaf was better than retarded loaf, but sourness more pronounced on the retarded.

I'm doing more baking right now, as we're in Prescott and awaiting houseguests.  Got to have plenty of bread to fill young tummies.  I will try a loaf without retarding and see what happens.  I appreciate your encouragement.

You've made me feel like a Queen for a Day with your recent baking! It's always nice to feel special.

The loaves were really not "so different" - just noticeably so, if you are really paying attention and looking for differences.

You, obviously, have much more experience with these breads than I do. If your experience differs from mine, you certainly have more of a basis for generalizing.

Your observation makes me think there may be something to do with differences in how we ferment the dough, proof it, or something else. But then, the "Fickle loaves!" explanation may be the best one.

But you got the kinda holes that drop mayonaise in my lap!  I donno? :)

I notice that you remove the bowl before Susan does, she covers longer, for about 20 minutes because sourdough tends to rise longer with oven spring than straight doughs. (!) Could that be making a difference in rise?   You are also in a more humid climate than Susan, what do you think about reducing the water just a bit?

I'm sorry, David, everybody is giving you strokes and I go and pull the parchment out from under you.  :)   Must be the full moon.

I didn't use parchment. Nyah nyah!

I like big holes (in bread). Try melting some emmenthaler on each slice to seal the holes before spreading your mayo.

Re. Covering and oven spring: I have found under-proofing and oven temperature rule oven spring. Covering increases the bloom. I find with many bakes, but not all, there is a lot of oven spring occuring after I remove the bowl. Covering longer makes a shiney crust I don't like as much.

My climate (San Joaquin Valley) is considerably less humid that Susan (in San Diego) has.

Sylvia, are you suggesting we are quibbling about nothing?

I think that's your hole point.

Ha,ha, Oh no, my hole intention was to say that I thought....the hole converation has it's points and it' great we can make a hole loaf with our favorite crumb!

David, thanks for the chuckles...sometimes I have a very dry sense of humor which should be saved for my bread crumbs!

Have a Great Day!