There must be a hundred different cinnamon roll recipes, from the French pain aux raisin to the British Chelsea buns to Philadelphia style sticky buns to the Midwest American truck stop cinnamon rolls that are as big as your head.

Here is the recipe I grew up with and still bake most often.

I made this bread and it turned out great! Even though it hardly rose after I rolled it out to add the cinnamon sugar swirl. Oh well, one loaf had walnuts and the other without but both were good, sweet, and extra tasty toasted.

Super Bowl parties are a great excuse for trying new recipes.  They also require lots of snack foods.  So, when I was asked to bring some chips, I happily agreed.  I was a good guest and took exactly what the hostess requested and then, well, then I improvised a little.

My wife is out of town for a week (hence no pictures with the post, since she has the camera with her), which left me with some additional time to putter around.  It occurred to me that I hadn't made pretzels for years and that they would be just the ticket for the party.  After rummaging around through cookbooks and recipe files, I came up with one recipe for whole-wheat crisp pretzels (in a Sunset publication, I think) and another for soft pretzels from the King Arthur 200th Anniversary cook book.  The soft pretzel recipe included directions for boiling the pretzels in a baking soda and water solution prior to baking.  Remembering the threads here about boiling versus not boiling and lye vs. baking soda, it seemed like a good opportunity to try the technique.

The whole-wheat version was almost entirely whole-wheat flour and water, with minimal amounts of yeast, honey, shortening and salt.  The recipe measurements were volumetric, but the scales still got a workout when I portioned out the dough for the pretzels.  They were very simple to make; just mix everything together, let ferment, scale, shape, brush with egg wash, sprinkle with salt and bake.  At the same time, they were very tedious--the recipe yields 8 dozen small (about 2-2.5 inch) pretzels.  If nothing else, all that practice certainly improved my shaping technique.  The first couple of dozen that I made had a certain Impressionistic quality.  You could tell that they were pretzels, but they were anything but uniform.  I perservered, though, and slowly got better and, just as slowly, got finished.  They baked to a pleasing shade of brown.  The directions called for piling them onto a couple of clean baking sheets and putting them back into the (turned off) oven to dry for at least 2-3 hours, using the oven's residual heat to drive off the moisture.  That didn't work quite so well as promised.  The next morning they were not nearly crisp but way past soft and not at all enjoyable.  So, I used the oven's drying cycle for the first time ever.  After a couple of hours of 180F temperature with the convection fan running and the door propped open slightly, they were bone dry and crisp as could be.

The soft pretzels from the KA recipe were pretty much the same as other soft pretzels that I have made, except for the boiling-in-soda-and-water step.  Boiling affects both the texture and the flavor.  The finished pretzel is moister than those that have not been boiled and, I think, somewhat chewier.  I'm a bit stumped about how to describe the flavor change.  There is something else besides the "typical" pretzel flavor.  Not bitterness, exactly.  Astringent, perhaps?  It's a subtle difference, but noticeable.  I should probably have baked one or two dry, for comparison purposes.  One of the people at the party asked if they had been boiled, but we were interrupted and I didn't get to ask her what it was about them that triggered her question.

Both varieties were a hit with the adults and the kids.  And if the kids are eating something that is almost entirely whole-wheat and liking it, it must be good.

I have read so many pieces about this bakery or that where they say this oven makes so many batches over a certain period or this bakery holds the record for consecutive batches...

So, having not been trained by a school or a professional baker, how big is a batch? Is it 2, 10, 20 or what? For me 10 loaves in a row at 2 pounds each was a great workout kneading but the time really flies when you are having that much fun!

Making breakfast for the kids today, I noticed a striking resemblance between the shape of the cinnamon toast and our home state: 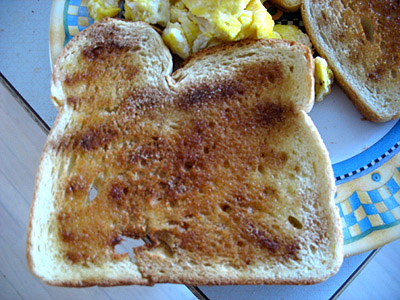 Heck, it even has holes near where Crater and Klamath Lakes should be.

Yes, I confess: this is cheap, store-bought white bread. Give me a break, it is Friday, alright? More fresh, home-made bread will be in the house soon.

Well, I leave the baking of breads to Floyd (my husband, and the webmaster of this site), but I figured I'd post this in my baking blog here because, well, maybe someone would find it fun (and besides, I suspect Floyd won't mind). Our son turned 4 on Sunday, and for his birthday he wanted to have a Pirate Party. So, I made him a Pirate Ship Cake! read more to see how it was done!

My boy wanted a strawberry cake, and I was a bit surprised at how pink the thing turned out to be. A few calculated slices and some picks to keep the pieces from falling, and we'd turn this into the scariest strawberry cake on the seven seas! There's the pirate ship! I left the mast off until we arrived at the pizza parlor where we planned to have the party. The ship was named after the birthday boy, with sugar skulls and a grape fruit-roll flag, pirouline cookie cannons, and chocolate malt-ball cannon balls

which turned out to be quite popular with the kids. Arr there be a treasure chest filled with gems and dubloons by the cap'n too! There she is, all assembled. The ice-cream cone crows nest was supported by a straw nestled inside of more pirouine cookies. The only part that wasn't edible (aside from the picks that held the shape of the ship and the straw, was the pirate flag hanging from the top of the mast. Oh, and the pirates of course. The kids loved it! 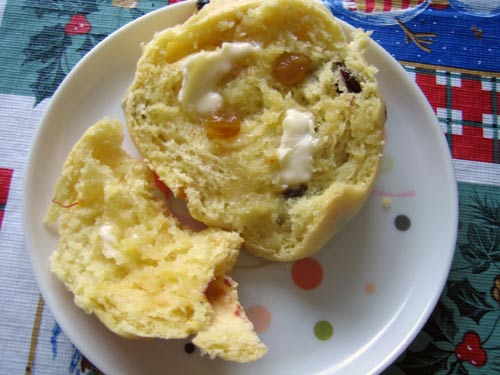 The first time I saw this recipe in Linda Collister and Anthony Blake's Country Breads of the World I nearly threw the book out the window. The recipe, called "Daniel's Saffron Bread," shows a 6 year old all decked out in an apron happily baking this Saffron Bread.

My 1st attempt at Lefse.

Once in a while, i guess i have to make a breakfast treat for myself. But every breakfast's a treat to me being a breakfast lover. :P
Though more suited for tea time, i decided made some Austrian or German (not too sure which one) jam filled yeast dumplings. But somehow, i forgot to include eggs in the dough. Nevertheless, it still was soft and moist (with flowing hot jam) and i dun think the eggs would make a significant difference.

I think i'd like to have it chilled better, thanks to the everlasting summer in the tropics.. haha

Pita bread is a great bread for beginning bakers or for making with kids. The entire process of making them only takes about two hours too, so it is also a great one for people on a tight schedule.