A neat book that I don't have time for

I'm returning a neat looking book to the library because I just don't have time to do it justice right now. That book is Celebration Breads: Recipes, Tales, and Traditions. It has celebration breads from all over the world and throughout the year. It looks like it has some very good recipes. I'm blogging it so that I don't forget about it when I have more time to experiment.

I'm also returning Laurel's Kitchen Bread Book. Definitely a classic, just really not up my alley. Too many recipes that make my wife go "ew" when I read the name, like "Mediterranean Garbanzo Bread" or "Soybean Bread." For folks with wheat allergies it looks like a real good one though.

I baked a buttermilk bread last night, trying another loaf of sourdough today. We're having red beans and rice with collard greens for dinner, so I think I'll also have to whip up a batch of corn bread to go with it. Yum.

I have read that a shaped loaf can be taken directly out of the fridge and immediately put in the oven for baking without leaving it to return to room temperature, and the interesting point was that the loaf can be scored easier that way.

Any ideas about which method is better? I have never taken a loaf out of the fridge and put it directly in the oven. Any comment regarding this is appreciated.

One more thing. I bake with poolish all the time. I normally leave the poolish for 12 hrs, then mix, knead, ferment for 2 hours, shape and a final rise for 45 minutes and then bake. comes out good, but with a tight crumb.

I'm thinking about expanding the whole process: poolish for 12 hours, autolyze flour and water, then add salt and starter, ferment for about 6 hours (with 4 foldings in the middle), shape, final proof in the fridge overnight for 12 hours, bake in the morning.  The ingredients are flour, water, yeast, salt; only, and around 73% hydration. any comments or ideas or concerns regarding this procedure would be greatly appreciated, and if it works, could it be scored and baked right out of the fridge, or should I leave it out for 2 hours prior to baking? Thanks. The reason I'm going about this procedure is to fit it in my schedule, and improve quality of taste, texture, crumb, etc...

Made a sourdough walnut raisin with added rye and atta this weekend. Its been a really busy weekend and by the time I got home to bake bread with the ready starter, it was already 10 pm. There was no choice but to mix the dough and put it into the fridge, no folding. I continued the process the next morning but the dough seemed a little sluggish even after 2 hours in the warm tropical environment. I resisted the temptation to add instant yeast and let Carl's Starter do its work. Fortunately, it delivered as usual. It has never failed once and I am glad it didn't disappoint this time.

With bread in the freezer, there wasn't much reason for baking this weekend, so I contented myself with some sourdough English Muffins.  After all, the starter was due for another feeding, right?  Now that they are cooling on the rack, I suppose that I really do need to get to work in the basement.

Baking is so much more fun!

i'm reading that some people are final proofing their dough uncovered. I have always covered the dough during final proofing (after shaping). does it make a difference? is the one way particularily better than the other? any comments, suggestions, ideas regarding this would be greatly appreciated. thanx a lot

I did more work on the recipe calculator (or whatever it should be called) last night. It is getting pretty neat.


Please select a recipe from the menu above.

I'd love to be able to flip this around and let people enter their ingredients and have it calculate the baker's percentages for them. Just a matter of finding the time to work on it.
October 19, 2006 - 6:50pm

Variety is good.  Even with all of the different types of bread to try and to enjoy, sometimes it's nice to do something a little different.  So, when my wife asked if I would make some Rocky Road Fudge Bars, I was happy to oblige.  This recipe was a Pillsbury Bake-off winner some mumble-mumble years back.  I've been making ever since I was in college.  It starts with a brownie base: 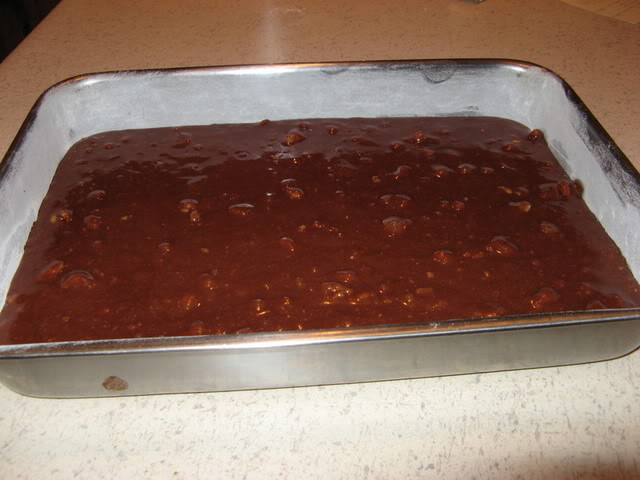 The base is then topped with a cream cheese filling: 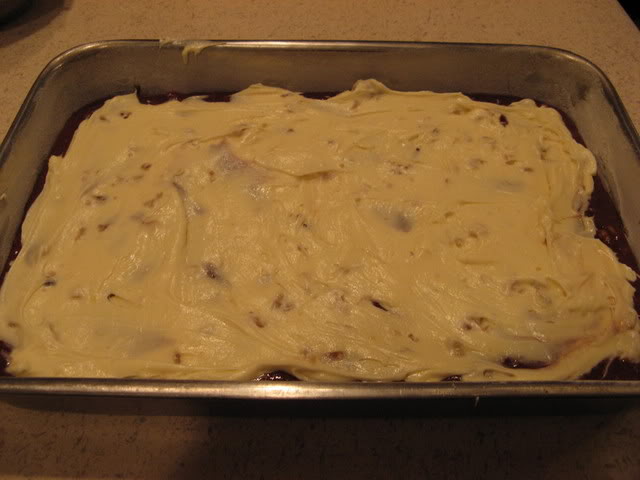 The pan is then put into a preheated oven.  At the end of the baking period, 2 cups of miniature marshmallows are scattered over the top of the bars and the pan is put back in the oven for 2 more minutes to soften the marshmallows.  It comes out looking like this: 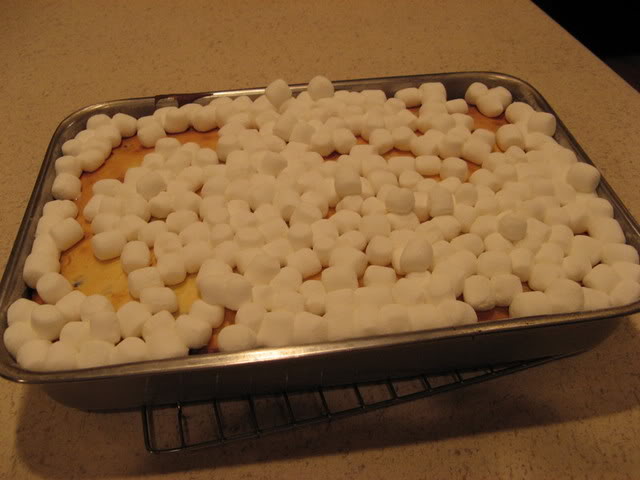 A warm, fudgy frosting is then poured over the marshmallows.  After swirling the frosting and marshmallows together, it looks like this: 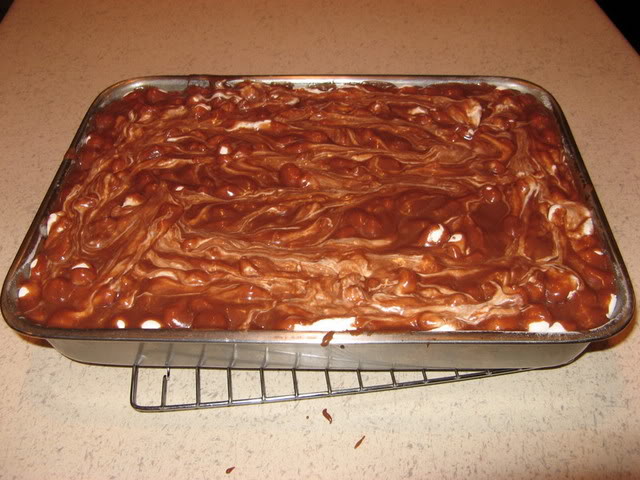 This is when things get difficult.  Unless you want to eat it with a spoon, you have to let the bars cool until everything is solid enough to cut into bars.  Best to just put it somewhere out of sight until it is cool so that you aren't seeing it every time you look toward the kitchen counter.  Oh, and cut the bars small.  One is enough to induce a sugar rush and two could push you in the direction of a diabetic coma, even if you aren't insulin-dependent.

You can find the recipe at the Pillsbury site, here: http://www.pillsbury.com/recipes/ShowRecipe.aspx?rid=10098

Last night, triggered by an IM from JMonkey, I started developing some toys for this site. Here is what I've come up with so far:

It needs some work still. I want to add more recipes and also convert units, but I think it could be pretty neat.

I almost forgot it was World Bread Day! But, my weekend baking actually applies pretty well to the holiday.

Yesterday I baked bialys. I learned about these breads from an employer, who wanted me to develop them as a product for their bakery. She loaned me her book The Bialy Eaters: The Story of a Bread and a Lost World by Mimi Sheraton. The bialy is a small yeast roll, similar to a bagel, which was invented by jewish bakers in Bialystok Poland. Unfortunately, after the holocaust and World War II, the bread was mostly lost to Poland and exists only in adopted countries where survivors immigrated and recreated traditional breads. In the book, Mimi Sheraton travels to Bialystok and talks to people about their memories of the rolls. It's a rather sad book, as she often discovers how much was lost from the traditions of Poland, and is really more of an anthropological tale more than a food book, but it's still an interesting read.

This batch I used the recipe from Artisan Breads Across America, by Maggie Glazer. Supposedly it is adapted from Kossar's Baker in New York, who is famous for their Bialys.

Bialys are made from a stiff, lean dough, and Glazer recommends a food processor for kneading, which I didn't find necessary (my DLX was fine with the workload). When I baked these at the bakery, I used to retard the dough overnight, which worked great. This time I just made them in a single day: a 2-3 hour first rise, then formed them into 2.75 ounce rounds, and let them proof another couple of hours unti large, soft, and puffy. My house was a little dry so I spritzed the rounds with water to keep them from forming a skin.

Once the rounds are proofed, the special shaping comes into play. You pick up the round, stick your thumbs in the middle and gently pull outward, creating a thin depression (but not a hole!) in the middle. The center dough will be nearly see-through, and will bake up crispy. An onion/poppyseed mixture is schmeared on top of the rolls, and they are then baked in a very hot (450 degrees+) oven. They will brown up nicely in 8 or 9 minutes: watch them closely and pull them out when they are brown. Unlike Bagels these rolls are not boiled first: they have a nice chewy crust right out of the oven but can lose a little something with age--reheating or a quick toasting helps with that! It's a little tricky to get the center "hole' big enough so that it doesn't close up during baking--every roll turns out a little different!

We ate them plain right out of the oven, and later on split them and ate them toasted with cream cheese.

Happy World Bread Day, one and all!

Being a Monday, there is very little likelihood I'll get to bake. So I baked Sunday instead. I baked two Blueberry Cream Cheese Braids. 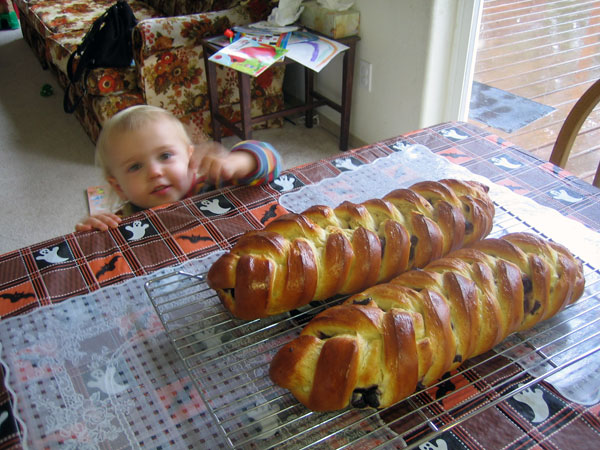 A sourdough loaf with my new starter (I haven't had a chance to post about that yet). 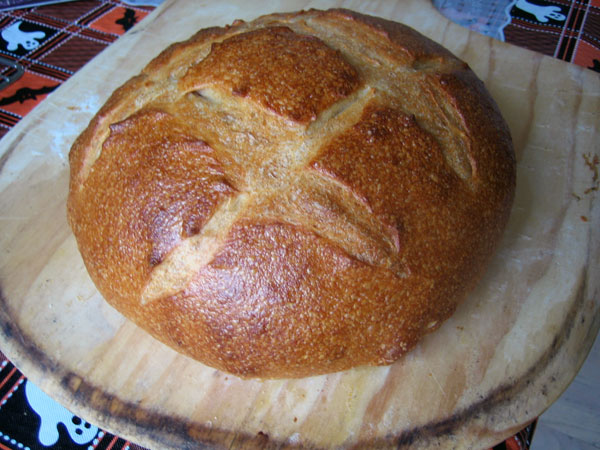 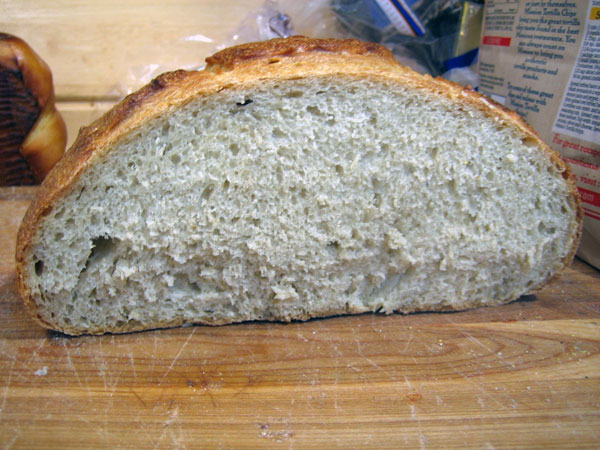 Without question, this was the best sourdough loaf I've ever made.

I also baked something like the Pugliese from The Bread Baker's Apprentice with some left over mashed potatoes I had. 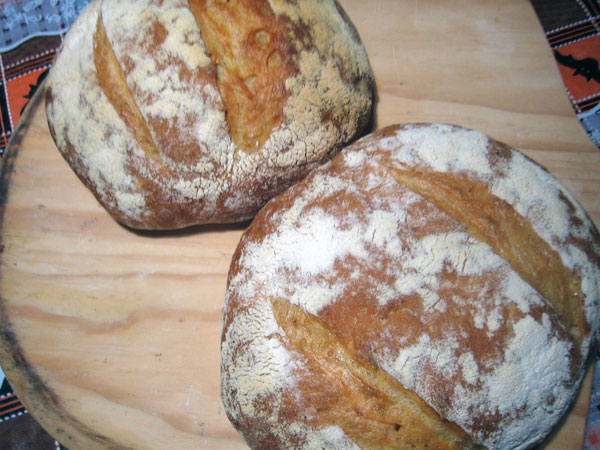 So tomorrow, to celebrate, I'll eat them up, and perhaps share some at the office as a World Bread Day gift.