Becoming an apprentice after more than 2 weeks...

Ahh...finally after more than a 2 week wait, it arrived. Peter Reinhart's bread baker's apprentice finally got to my doorstep. Got it from Amazon.
Haven't went thru it thoroughly yet, but it certainly looks great, though i find adhering to some of the recipes difficult at times (as in measures). ;)

I just set a starter out last night. Made of raisin water and unbleached all purpose. Hopefully i'll manage to get some loaves outta it this time.. hehe..

This is the 2nd time i'm doing this. Earlier this year, when i knew very little about making bread, my starter looked fermented, but they didn't produce anything or make dough rise... Guess it's just some other bacteria, not wild yeast. I live in a tropical country. Hope it's ideal for wild yeast and not some other nasty microbiological impostors...

Hmm, how do u know if ur starter is ready to be used and how long b4 u can use it, usually....

I baked a pumpkin french bread this weekend: 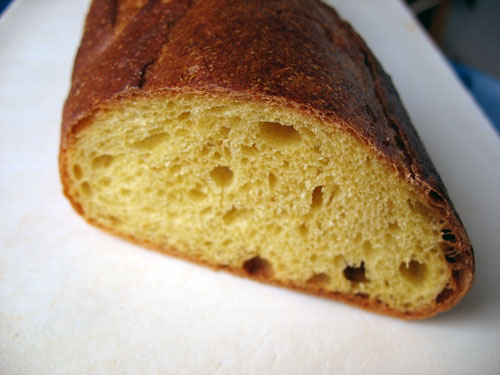 At least I think that is right. I'm putting it down from memory, so if something seems drastically off, adjust it!

The standard approach here: the poolish sat out overnight, two rises before shaping, baked at 465 for about 25 minutes in an oven with steam. Take a look at the rustic bread recipe if you want more info.

I did a decent job scoring them: 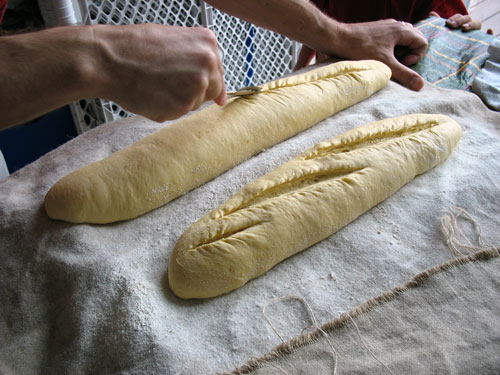 The pumpkin loaves are on the outside, a rustic bread I baked in the center. 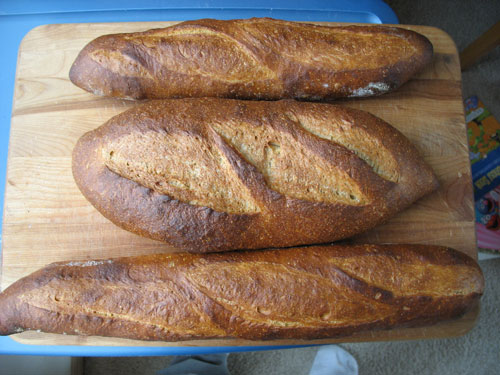 I think if I try it again I'll bump the amount of pumpkin up to 6 ounces. You really can't taste the pumpkin much. But you catch a whiff of it pulling a slice of it out of the toaster.

Today, I baked a birthday cake for Floyd. 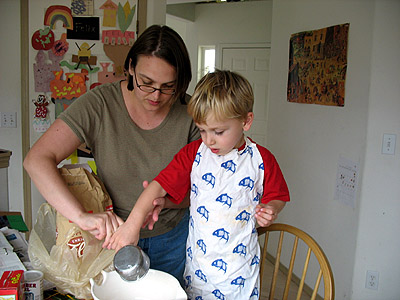 Our son was a great helper. 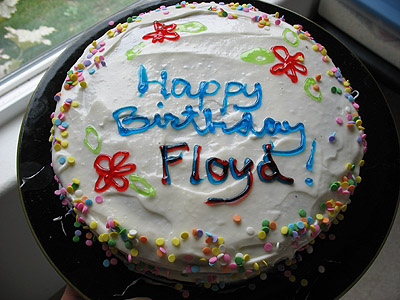 And look! My first baking blog entry on your site too!

Happy Birthday to you, Floyd!

Sunday is my birthday. Sunday is also World Bread Day.

Coincidence? I think not.

After my excessive baking spree last weekend, I had said I wasn't going to bake this weekend. But I may just have to celebrate World Bread Day by putting together a loaf or two.

Step one: admitting you have a problem

"Hello, my name is Floyd, and I am a bread-aholic."

I went crazy this weekend. Kaiser rolls, a french bread, oatmeal raisin cookies, pumpkin bread, ciabatta, a raspberry cheese braid, honey wheat bread. Not to mention that I made a batch of apple butter, specifically for eating on home baked bread.

Next weekend, I've gotta stop. Maybe one or two batches but that is it.

Man, I'm pooped. Recipes for more of these may follow, but for now just a few pictures and comments: 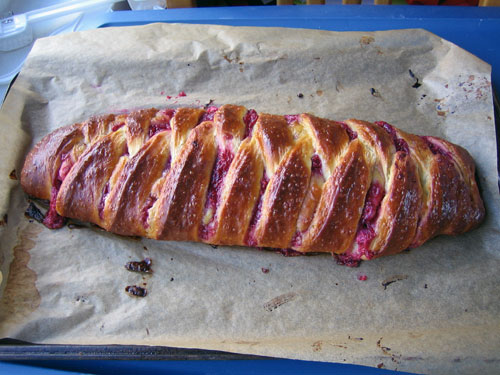 I had some leftover raspberry sauce from Saturday morning waffles that I wanted to use up, so I made this. I used the milk bread dough from the Village Baker. I think Hensberger's milk bread that I used for the braid last time is better. Either that or I overbaked it, because it came out fairly dry. 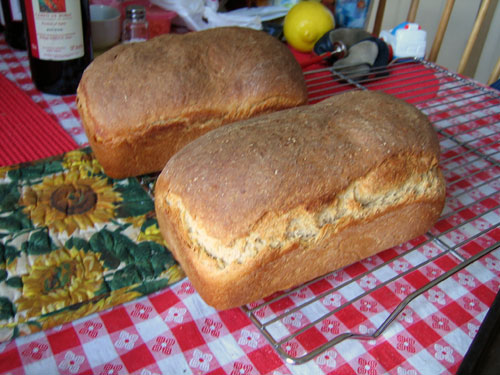 The buttermilk bread. Haven't tried it yet. It is basically this recipe. Nothing fancy but should be quite good toasted with apple butter. 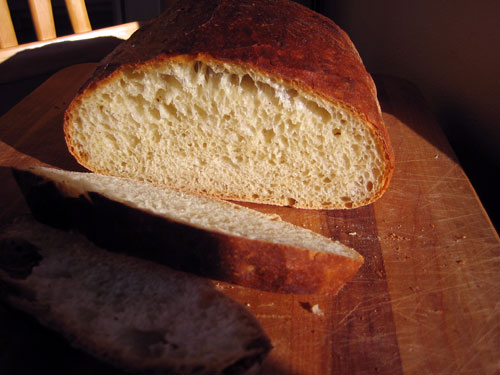 Hamelman's ciabatta again. I added a little (1/2 teaspoon) extra yeast because I wanted a break from dense homemade bread. It didn't come out quite like ciabatta, but it wasn't bad.

You know you've got the baking bug bad...

You know you've got the baking bug bad when you find yourself making a sponge on a Saturday night not even sure what you'd want to bake the next day, just figuring it is a good idea to have one ready.

I think I may try a ciabatta again, but who knows? Still, I'm glad to have my poolish handy.

Yesterday i tried making croissants for the 2nd time.
The first time wasn't tht good becoz the butter burst through the dough and i just threw part of the dough and simply made some badly/oddly shaped croissants.

So yesterday, i rolled out the dough and thought mebbe if i use pieces instead of a block, the results will be better. Instead, the pieces were too frozen and it pierced right through the dough!.. :S... I got frustrated and kneaded the pieces in the dough and roughly crushed it while i kneaded it. Then i quickly threw it in the freezer.

I took it out and did a business letter fold but the butter burst through the other side again. So i just folded tht part over and froze it.
I got an idea suddenly, instead of doing the business letter fold, i rolled out into a long rectangle and rolled it up like a swissroll. Then rolled it out again after freezing it. I tot tht could incorperate more folds in less time...and it did! ...
It came out to be quite good, with layers and a lot of volume. :)

I shared it with my church group and they found it hard to believe i made it.. :P hehe
(hmm..how do u attach a photo??? )