Since the unfortunate demise of my starter and the jar of leftovers I have been busy making new ones. SourdoLady's pineapple juice one and the yogurt one I started out with originally. SourdoLady, the pineapple one started out well but hasn't done much of anything since I changed to ap flour and water. I have stirred like crazy, added a spoonful of rye, even tried the apple cider vinegar. I am now to day 11 and there are bubbles on the surface but no sign of rising. What do you think - should I keep on repeating day 4 or toss it and start again? I really want it to work. On the other hand, the yogurt one is pounding his chest and pawing the ground and today I made some of the best sourdough bread so far, using Susan's recipe with the overnight sponge. Could it be sibling rivalry? Should I sit them side by side to encourage the timid one? If you think I should continue I will, but I still have more pineapple juice so I could try again. Thanks in advance for any suggestions, A

We had a nice get together this afternoon. Had four regular TFL participants show up (leemid, myself, JMonkey, and crumb bum) and one other reader whose screenname I didn't catch. We had a pretty decent spread: 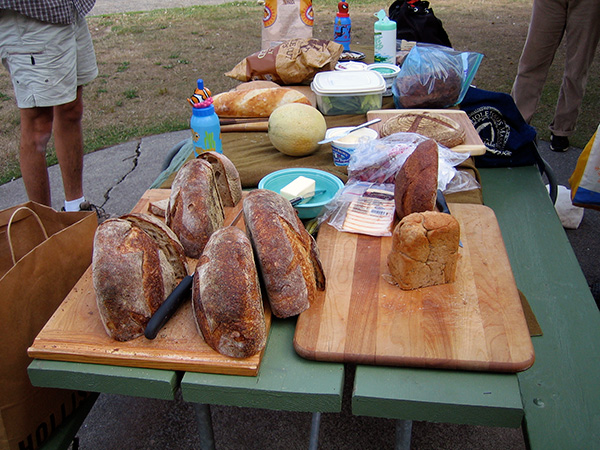 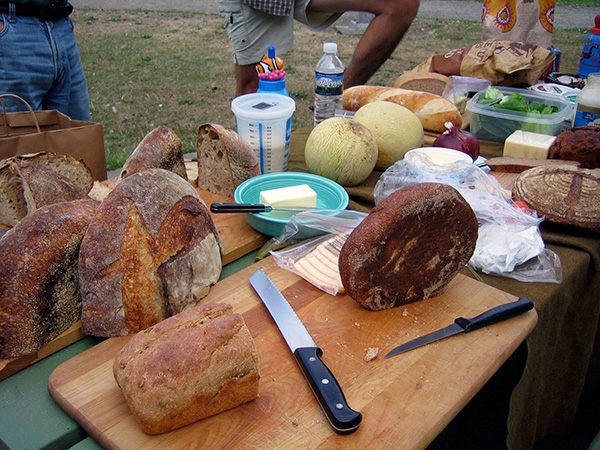 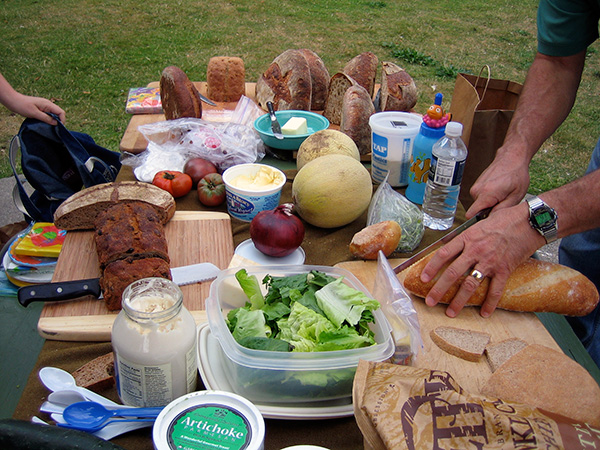 If memory serves me right, the breads were (starting at 9 o'clock) JMonkey's whole wheat raisin bread and a whole wheat desem bread, my whole wheat sourdough and the honey whole wheat bread with sunflower seeds, crumb bum's miches (one with 15% whole wheat flour and one with 15% rye flour), and leemid white sourdough (made with Carl's starter, I think, or was it Otis?) and a rye he made. 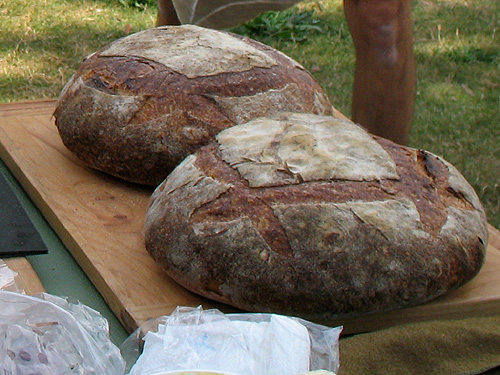 All of the breads were good, but crumb bum's miches (pictured above) blew me away. His formula and techniques can be found scatter around the site, but what I jotted down was:

Mix in the evening, fold 4 or 5 times, then cover and leave out at room temperature overnight. Shape early the next evening, let rise for 2-3 hours, then put in an unheated oven (more on that here). Crank it up to 500 for 10 minutes, then reduce temp and bake until complete.

I will be trying this soon, probably tomorrow.

Thank you to the folks who showed up. And for those of you who wanted to but couldn't, we'll definitely do it again.

Finally got around to activating a sourdough starter I got at least two years ago from Ed Wood's Sourdough International; did both baguettes and a no-knead loaf. A couple of photos; more at www.alan-ohio-bread.blogspot.com I was wondering if anyone knows how to form a pain de beaucaire. I have found a few formulas but not enough of a description to figure out how the loaf is formed. I have looked on the web, but google does a poor translating job from French to English. Can anyone help? 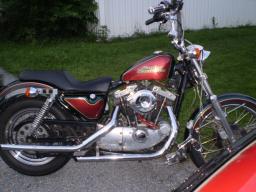 Been awhile since I've made this bread - made it yesterday ~ not to pretty -But tasty just the same!!

Am a chef / pastry chef for a private club and revamping menu - getting away from fried "Bar food" entrees and into a more classic tavern style food /with less starchs and lighter sauces. Plus starting to do all breads for sandwichs - so far have very good results with the sour dough - even though my starter is only 6 weeks old. Use it for two different sandwich breads - roast beef on garlic caibatta - and a two pound loaf for club sandwichs.

The One great perk about this job is the kitchen - I have access to it anytime ~~ we open at 4 and close at 11 - monday thru thrusday and open for lunch Fridays,Sat, and Sundays .... So I have tyme to "Play"   Will keep ya'all posted . Plus think its tyme to buy a digital camera . 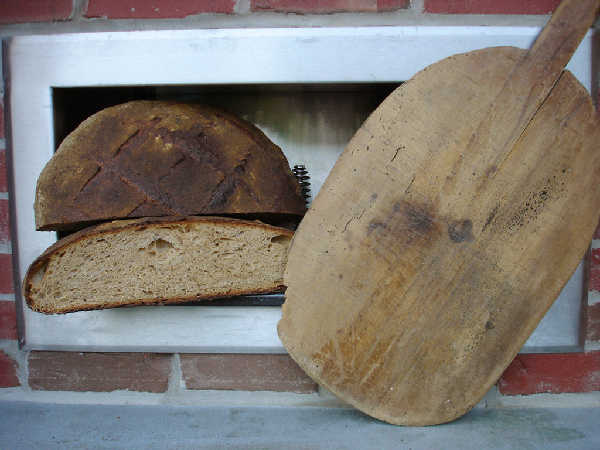 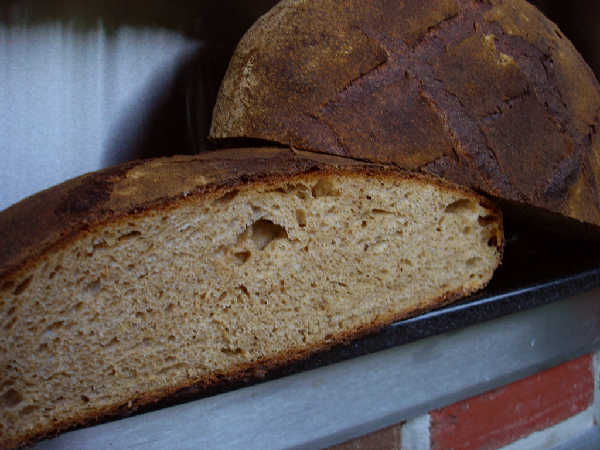 This miche is a lower hydration version of Miche(2) blogged a while back. I accidentally mixed in an entire levain that had been made larger than what I had intended in this recipe originally. I wanted to have an inoculation or percentage of fermented flour to total flour of 15%, similar to Hamelman's VT Sourdough, but I ended up with about 22%. I therefore had a problem with excess acid breaking down the gluten, which made the boule hard to shape and ended up making this a slightly denser miche than I've accomplished before. It's still a good chunk of bread. I baked it in my new brick oven from Woodstone. I managed to get the temperature much more reasonable, and came out with a nice crust and avoided the scorching I'd had in the first few attempts with this new oven, as I learned to manage the heat and the steam in a brick oven.

I have some photos of the process and an html spreadsheet, as well as the Excel spreadsheet that includes the recipe and a model to estimate the bulk fermentation and final proof times.

Mix the additional white flour and water and knead minimally into a small dough. Spread the soak out like a pizza. Spread the white flour over the soak, roll up, and knead lightly to mix. Spread the dough out again and spread the levain over the dough, roll up, and knead the dough until well mixed. I have used a technique described by Glezer in Artisan Baking that works very well to mix the dough. It involves working down the dough squeezing it and extruding it through the fingers. I repeatedly dampen my hands to avoid too much sticking. Alternately, I work in some folds similar to a kneading technique in Bertinet's video and also described by Glezer in Artisan Baking.

Let the dough rest for about 30 minutes.

Spread the dough out like a pizza and sprinkle the salt over it. Again, knead to thoroughly mix the salt and to get a soft but not wet dough that is smooth and has some initial gluten development.

Cover the dough and set aside to rise. Stretch and fold every 30-40 minutes. The total time from mixing the levain in with the dough would be about 3-3.5 hours using my starter. It should somewhat less than double in volume during that time.

Shape into a boule and allow it to sit on the counter upright for 10 minutes to allow the seams to seal. Be sure to shape tightly, or you will get large holes or crust separation on the sides or on top. Place upside down in a banneton or a bowl lined with a well dusted cloth. This dough can be sticky, especially if it gets too wet, so beware of sticking couche fabric. Adding about 25% rice flour to the dusting flour may help with this.

The final proof would normally take 2-2.5 hours with my starter. I normally place the whole thing in a ziplog "Big Bag" along with a bowl of warm water to maintain a warm and humid environment for the final proof.

Turn the loaf onto a peel dusted with semolina or corn meal. Slash as you like. I wasn't paying too much attention to this one, and ended up making a "square" pattern, which is not too attractive in retrospect. I liked a "diamond" pattern I had done previously, which is what this one was supposed to be.

Bake starting at 450F with steam, however you may accomplish that. Drop the temperature in the oven down to 400F, then down to 350F, if necessary, if the crust begins to get too dark. Bake for about 45-70 minutes, depending on your objectives. I did this one for 70 minutes to get a fairly dry crumb and a crisp crust that stays that way. However, sometimes I bake for less time, so I can freeze the bread and then reheat it later. I think it is better reheated or toasted if it hasn't been fully baked at bake time.

I'm still very happy with the flavor, which is very similar to miche(2). This time, the lower hydration resulted in a slightly denser crumb, but it is more practical for sandwiches or for toast in the morning. The crust stays crisp with the long bake and lower hydration, which I had trouble with in miche(2). Unfortunately, I think the crumb would have been better and the rise and density better if I had used a lower inoculation, like 15%, and a slightly less ripe levain. That will be the adjustment for next time.

Beauty is in the eye of the baker

A beautiful pizza I made this weekend: 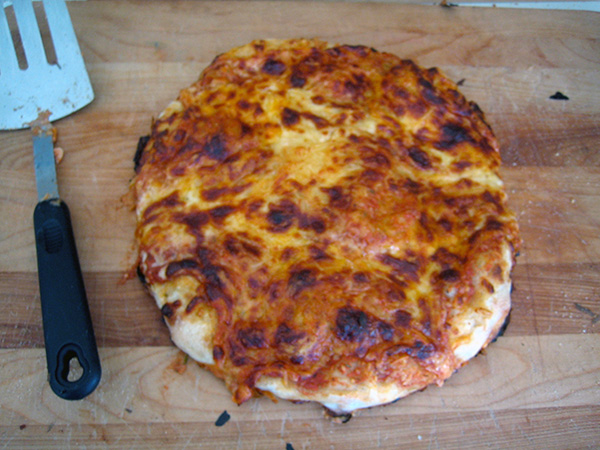 Well, perhaps not beautiful, but tasty.

This was something along the lines of LilDice's ciabatta pizza.

Where did summer go? Man, it blew by.

My apologies for being nearly absent on the site this summer. I read and responded to little questions almost every day, and I baked quite a bit this summer. But for the most part I stuck with my tried and true recipes, only adding 1 or 2 new ones to my regular repertoire, and did very few high quality posts on the site. I find that now that I have two kids who rarely take naps I have a lot less free time that I did when I started this site (with only 1 child who napped a lot and went to bed early). My new job hasn't left me much free time either: I have a longer commute and, given that my salary is paid by charitable contributions I don't feel like it is right to spend time on the clock working on my personal site. So I don't. So my Fresh Loaf time has been reduced considerably.

My best to all observing holy days the next few weeks.

Today, besides Challah I produced two loaves of Reinhart's multi-grain Struan from his new book. For the "grains" part I used about 1/3 cooked brown rice, and the reset rolled oats. For the liquid is used yoghurt.

Took quite a while longer to bake than I thought it would, but tastes great. I did score a little too deep, and combined with oven spring, made the loaves spill over the side of the loaf pan just a little. Taste, luckily is not affected!

It looks like the left side is not cooked, but it was. This was a side effect of my camera using a large lens opening, and thus having a very shallow depth of field.

Today I baked a traditional (i.e. round) Challah for the new year's celebration.

Certainly not my best ever, but it'll do!

The bread is very dense - 6 cups rye flour and 3 cups whole wheat.  Inexplicably, it also calls for a mere 1/2 teaspoon caraway seeds.  I put in about a tablespoon, but I could have added more.

Also, with all that flour, it only makes two loaves.  But I like to make mini-loaves because I'm a single person.  So I made six mini-loaves, but each one of those was still 12 ounces.  I probably should have added some vital gluten.

It is, however, very good.

I was very excited with how well my sourdough starter was doing.  I've had bad luck with it, and thought I would finally have a success.  I was disappointed when the final dough called for yeast.  But that's a lot of rye for a sourdough to handle.  So I'll have to look for a sourdough-rising success next time.