Both Peter Reinhart's "Bread Baker's Apprentice" (BBA) and Daniel Leader's "Local Breads" contain formulas for "Pain à l'Ancienne," based on the explorations during the 1990's by several Parisian bakers of lengthening bulk fermentation to achieve improved flavor. Of course, these techniques could not have been used in the "old days" that the name of the bread implies. Bakers devoted to this new technique use modern refrigeration which was not available to their ancestors.

Reinhart based his version of pain à l'ancienne on that of Philippe Gosselin. In BBA, Reinhart describes Gosselin's method in very general terms and then says the formula he provides is modified to make it easier for home bakers. In January, 2003 Reinhart sent a message to an internet mailing list which contained a detailed enough account of what Gosselin told him to write a formula. For me, the original formula did not seem more difficult than the one Reinhart published. This is because I almost always bake on weekends when I can accommodate my activities to the original formula. So, I thought I would give it a try. My interpretation of Reinhart's interpretation is as follows:

Mix the flour with 325 gms of ice cold water and refrigerate overnight.

The next day, remove mixture from refrigerator. Add yeast, salt and another 25-50 gms of cold water and mix thoroughly for 4-6 minutes.

Ferment at room temperature until doubled in bulk (up to 6 hours).

One hour before baking, preheat oven to 460F.

Divide into 4 equal piece and gently pre-shape into torpedos.

Shape into baguettes by stretching to 12-14 inches, score and bake immediately with steam at 460F.

The breads I made today used the following modification and extrapolations:

2. After the long "autolyse," I mixed the flour and water with 30 gms of additional water, the yeast and the salt. The autolysed dough had moderate gluten development already and didn't want to take in the additional water with hand stirring, so I did the best I could with a scraper, then mixed in my KitchenAid with the paddle for about 3 minutes, then the dough hook for another 3 minutes. I then transferred the dough to a 2 quart glass pitcher and used Hamelman's in-the-bowl stretch and fold technique - 20 folds, 3 times at 20 minute intervals over the first hour. I then let the dough rest, covered, until doubled.

3. Gosselin's instructions to Reinhart indicated the dough would take 6 hours to double. In my (warm) kitchen today, it doubled in 4 hours.

4. I emptied the dough onto a flour-dusted board and dusted the top. I divided the dough into 3 parts. I pre-shaped the two smaller ones into rectangles and folded each long side to the middle and sealed the seams. Those, I rested with the seams down for about 10 minutes then stretched into "baguettes" and placed them on floured parchment paper. The larger piece was just cut in half to make pain rustique, rested and similarly placed on parchment.

5. I baked at 460F with steam on a pizza stone. After 7 minutes, I removed the loaf pan and skillet and continued to bake for a total of 20 minutes. I then turned the oven off, cracked it open, and left the loaves on the stone for an additional 5 minutes.

These breads had a nice, crunchy crust and an open, tender, somewhat chewy crumb. The taste was classic sweet baguette - as good as I have ever made. My wife liked it, but said she preferred the taste of the Anis baguettes with sourdough added. No surprise, as we are both partial to sourdough breads.

I was concerned that the pre-shaping of the baguettes, which Reinhart does not call for in his adaptation of Gosselin's formula, would decrease the openness of the crumb too much. It was more open than I expected. I guess I have learned to handle dough gently enough. On the other hand, it would be worthwhile to try making baguettes with this method but just cutting the dough and stretching it, without any other shaping, to see if the crumb would be even more open.

If your baking schedule allows for Gosselin's method, I would certainly recommend you give it a try. In my hands, it makes very fine baguettes.

The pains rustique require no forming, and are essentially like ciabattas. Reinhart says this dough can also be stretched into a circle or rectangle and used for pizza. I have not tried that and would be interested in hearing from anyone who does so.

I incorporate extra water by squeezing it into the dough. You are using time. I'm happy to know that "hands off" method also works. I wonder if there is any difference in the crumb structure between the two methods.

David, I owe you a great debt of gratitude for this recipe that I chanced upon.  Previously I have struggled to achieve a crispy crust and open, sweet and chewy crumb.  This one pressed all the right buttons and delivered a couple of delicious baguettes/batons for lunch, and bonus points for their delightfully unsophisticated appearance!  A definite keeper! 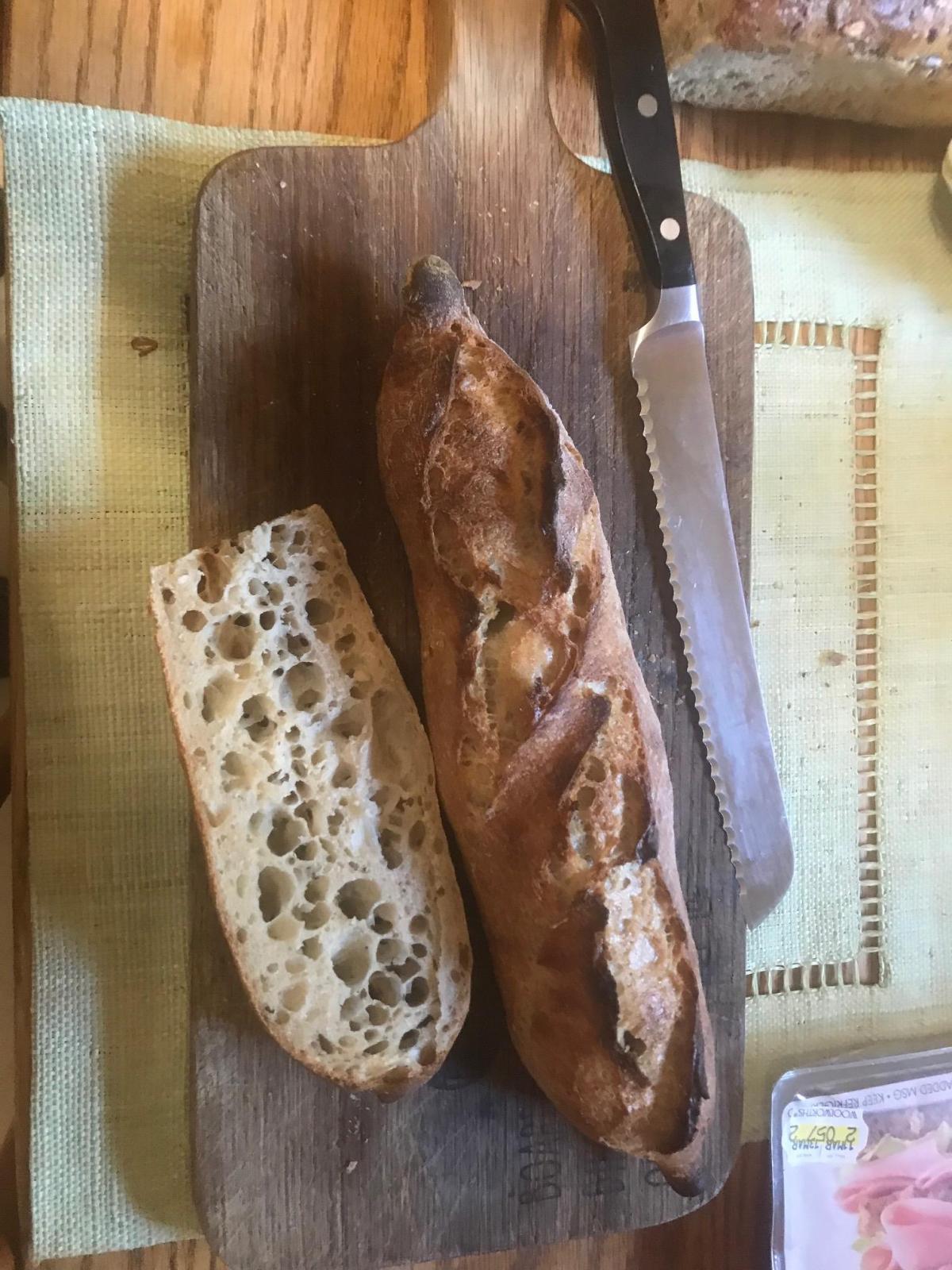 Nice job! Thanks for sharing. I'm happy you like this recipe.