Hello from the Oregon woods

Hello from the Oregon woods

I'm really enjoying browsing around on this site!  Been baking, off and on, for about 50 years.  A bit more frequently now that I'm retired from my day job :)  I'm known for my Irish Soda breads (and variations thereon), various rye breads, honey-egg bread, and a few others.  My current experiment (having its first rise as I type) is an orange/cardamom/fennel/anise rye that I'm attempting to convert from a standard loaf-pan version to boule in a dutch oven.  If this works I'll post pics (maybe even if it doesn't, and the results are amusing ;) ).

Next experiment will be to convert this traditional raised bread to a slow/cool raise.  Any suggestions welcomed! 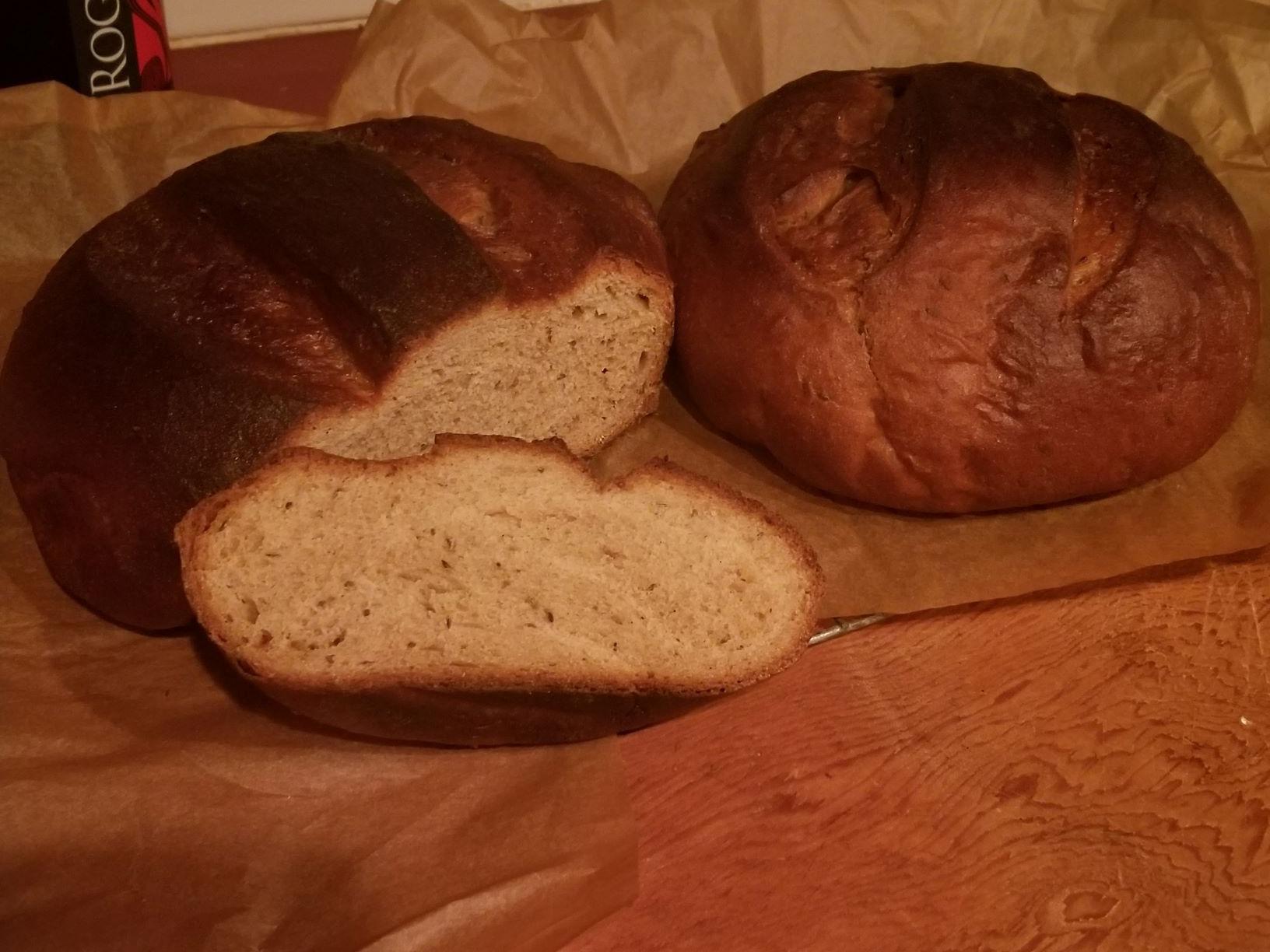 Welcome!  Interesting flavors you mentioned for rye.  What does the conversion to slow/cool rise mean?  Will you switch to instant yeast or same yeast, just slower?

Hi, Angelica, thanks.  The recipe that I started with was this one:  https://www.allrecipes.com/recipe/139542/danish-spiced-rye-bread-sigtebrod/    but I've tweaked it a little bit -- mainly using honey instead of molasses, and a can of condensed (non-sweetened) milk plus enough water to make 2 cups total, rather than a cup of milk and one of water... and, lately, bake in dutch ovens rather than pans.  Oh, and I use zest of whole medium orange as opposed to one measly tablespoon.  ;)    Gotten rave reviews on this, so far.  It looks like the next reply to my original message may have the answers I was seeking... Cheers,  JcP

Starting with a 100% hydration starter, I replace yeast with replace 20% active starter, and reduce the water and flour in the recipe accordingly.

Mix flour, water, starter, and do a 30-60 minute autolyze before adding salt. Replace kneading with hourly stretch-and-folds for 2-3 hours until the dough has developed a good strength.

Thanks, Wonner (?)  This is the kind of advice I was hoping to find!  So... should I be able to search recipes on this board to find instructions for the 100% hydration starter?

!00% hydration starter is nothing more than any starter that is 1/2 flour and 1/2 water by weight.

So take a few tablespoons of any starter and mix in 100 g flour and 100 g water and you have it. Or any equal amount of flour and water by weight that you need for your recipe.

Then plan to have that new starter nice and active right when you want to start mixing. Perhaps 6-8 hours.

Thanks for the information!  I'll give it a shot!

Jeff, Have you baked with sourdough leaven/levain/starter before, or just used commercial yeast?

Once, many many years ago, someone gave me a jar of starter.  I baked one loaf with it before it died an ugly, neglected, sad death in my refrigerator.  Now that I'm retired I might have time & energy to try again.  I have experimented with slow-rise versions, poolish, etc, but only a few times.  Good results, though.

A sourdough starter to be exact.  You can acquire one or make one.  I've started quite a few of them and I have had success with several ways of making them.

A few tips on starting your own from flour & water:  Chose one method and follow the directions of that starter without changing to another midway.

so... Stand out some water in a pitcher right away and start looking for a sourdough starter or recipe.  We even have members that might share a starter with you, be sure to get maintenance instructions with the sample.

Thanks so much!  I'll have to give this a try... probably not until after the holidays as my baking schedule is pretty full... ;)

I have well water, treated with UV light, no chlorine, so I don't think I'll need to de-gas it.

Mini, you covered everything one needs to know to create a starter.  I wish I'd had all this info, spelled out so well, when I began my starters two months ago.

Jeff,  Mini Oven gave a good method for creating a starter by pulling the micro-organisms out of the air.

You can also buy commercial preparations from several suppliers on Amazon.  I purchased a very tasty and "tangy" dehydrated sourdough culture from "Cultures for Health" via Amazon.  I got their Whole Wheat (desem) Sourdough starter and used it for over a year before  I accidentally killed it off by freezing it too long.

A "culture" is basically a "pre"-starter, with the _dormant_ organisms in 1/2 teaspoon or so of a dried water/flour mixture.  You then  "activate" this 1/2 teaspoon of culture with daily additions of a small amount of water and flour.

My Cultures for Health starter froze/died-off while I was testing out a "free" (actually for a $1 donation) starter I obtained from a group that distributes what they call the "1847 Oregon Trail Starter":   www.carlsfriends.net

Using a dehydrated starter/culture is a bit simpler and quicker than the "pulling it out of the air" method.  Though the latter is  totally suitable, and somewhat preferable, to do-it-yourself "I-made-this" types, and creates a truely "local to you" starter.

Here is the Cultures For Health San Francisco style sourdough culture for mostly white flour breads, it has the specific strains/species of lactic acid bacteria and wild yeast that is "typical" of the bakeries in San Francisco:

Here's the Cultures for Health Whole Wheat Sourdough culture that I first used:

The starter culture from www.carlsfriends.net was only $1 donation, plus sending them a self-addressed-stamped-envelope.  (I would send a padded envelope, so that the chunks of dried starter don't cut through the envelope due to rough handling at the Post Office.)  IMO, the culture from them was easier and quicker to get going than the one from Amazon, and had 1 tsp instead of 1/2 so you have a second chance if the first try at reactivation did not work.

The one from www.carlsfriends.net does not have the soury "tang" that I liked about the one from Cultures for Health.

Thanks so much!  I will definitely be looking into the resources you've so kindly provided :)

The sourdough starter I was given back in 1975 or so claimed to be descended from the Alaska gold rush days... but who knows... ;)

I firmly believe the organisms are in the flour and not in the air in my kitchen.  They just need a little selective encouragement.  I don't like having my name simply mixed up with "it's in the air" belief in the same sentence.

Dave is just trying to limit your fun playing mad scientist in the kitchen.  A lot can be learned from wild yeast.  And you might have better luck than he did.  :).   If you want a quick starting fast SD starter look up raw sauerkraut starter.  Talk about a jump start!  This is the time of year for raw sauerkraut and it keeps a long time in the fridge until after the holidays.  It's the juice you want to mix with flour.  Scroll down to the more recent posts (2018) at the bottom using raw sauerkraut instead of canned.

Glad you've got great water.  That makes things much more convenient.  I'm getting my holiday baking together too.  Gotta cut out sugar so the list is short. :)

New (to me) use for discard...
UK milk suitable for making cheese?
Gummy/damp texture to touch
My DIY bannettons and bread they make
Hello, I'm newbie
END_OF_DOCUMENT_TOKEN_TO_BE_REPLACED