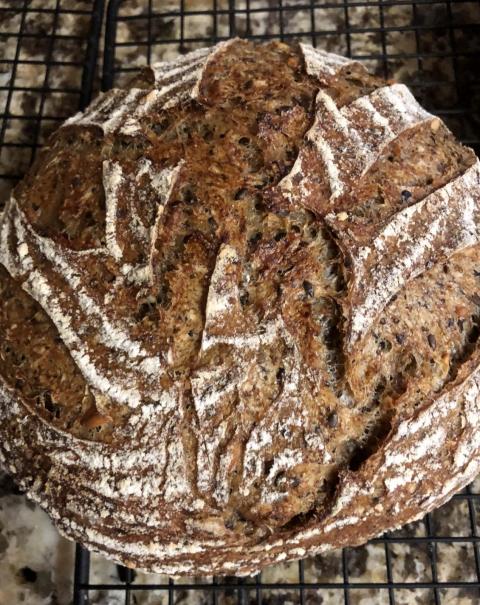 Leslie made some fantastic loaves with this recipe and since it was something that I had seen a number of people try and produce amazing loaves, I decided to give it a shot. Of course, I had to go and change the way the dough was put together. 🙄

I went ahead and used Trevor’s premix method but when it came to mix the soaker with the water and flour for the main dough, I realized that this was not going to work because a lot of the hydration came from the levain, and with the pre-mix method, the levain doesn’t go in till the next morning. So at first, I thought, no biggie, I will just steal some water from the levain and it will be all good. Well, uh! No! If I stole enough water from the levain to be able to mix the soaker with the flour, I was left with only 46 g of water to hydrate the 225 g of flour. So that wasn’t going to work.

I was going to need to add a lot more water to the whole recipe. So I went with 70% hydration for the dough flour (the soaker had sucked up all of the water and didn’t look like it was about to give any back, it was that firm) and 80% hydration for the levain which came out to 13% more hydration than what Leslie posted in her recipe without the extra bits she added while making her dough. I crossed my fingers and hoped I didn’t end up with soup when I mix the levain in with the main dough in the morning.

I also did one more change and that was to use the wholewheat flour in the levain instead of the a/p flour it called for. I wanted the bran to be softened by the acid in the levain. So the pre-mixed dough was all a/p flour. Our Canadian flour is ~13% protein (if you can believe the company’s claims) so I didn’t use any vital wheat gluten or high gluten flour.

And the last thing to note is that I scaled this for 3 boules of about 750 g.

Here is what I did: 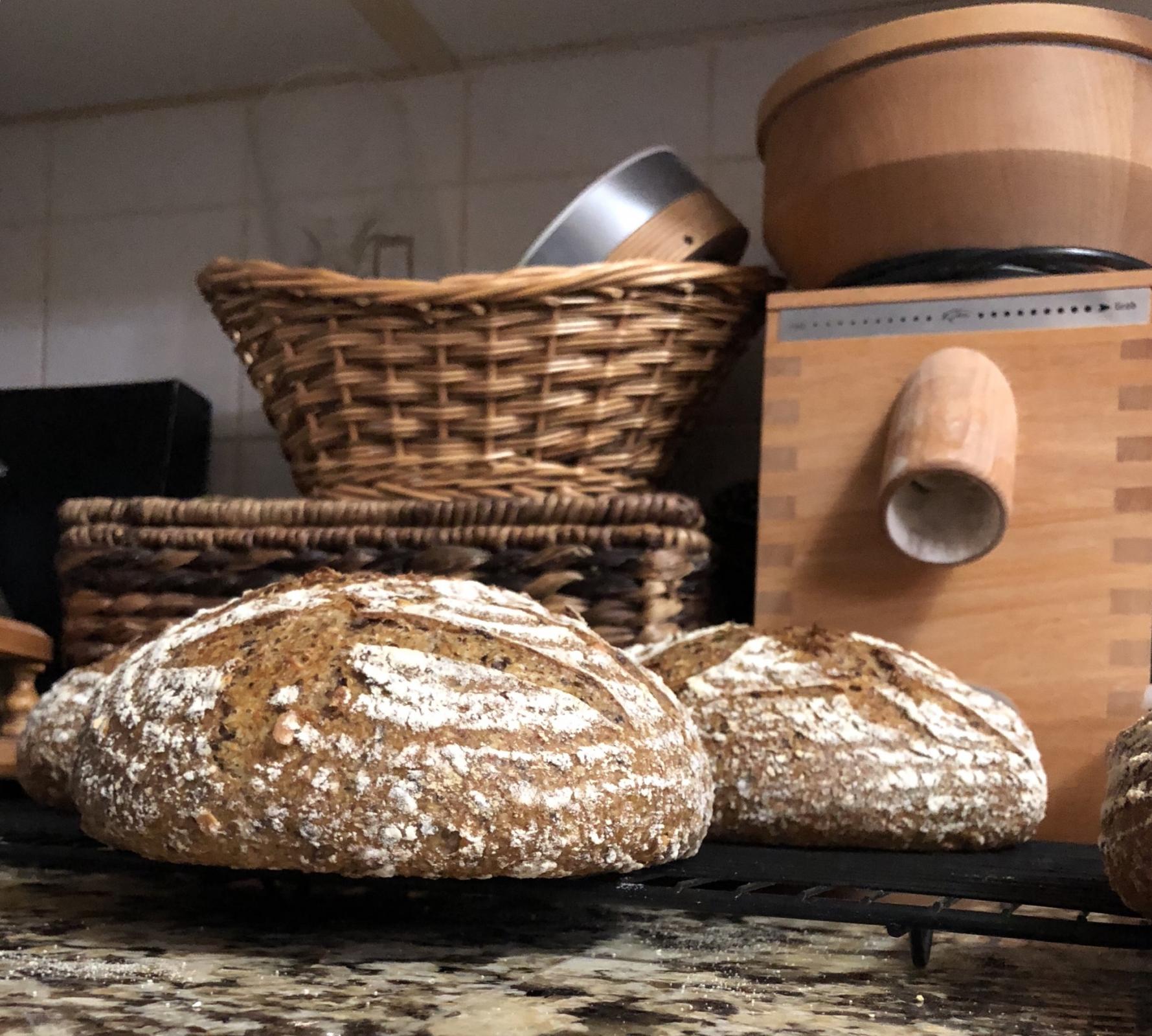 Well the results were very little oven spring. I wonder if I should have added that vwg after all. I also wonder if the gluten in the Levain  degraded during the overnight rise. It did feel sort of very loose when I used it. Hopefully, the taste makes up for the appearance. I need to make this again but following Leslie’s procedure this time. 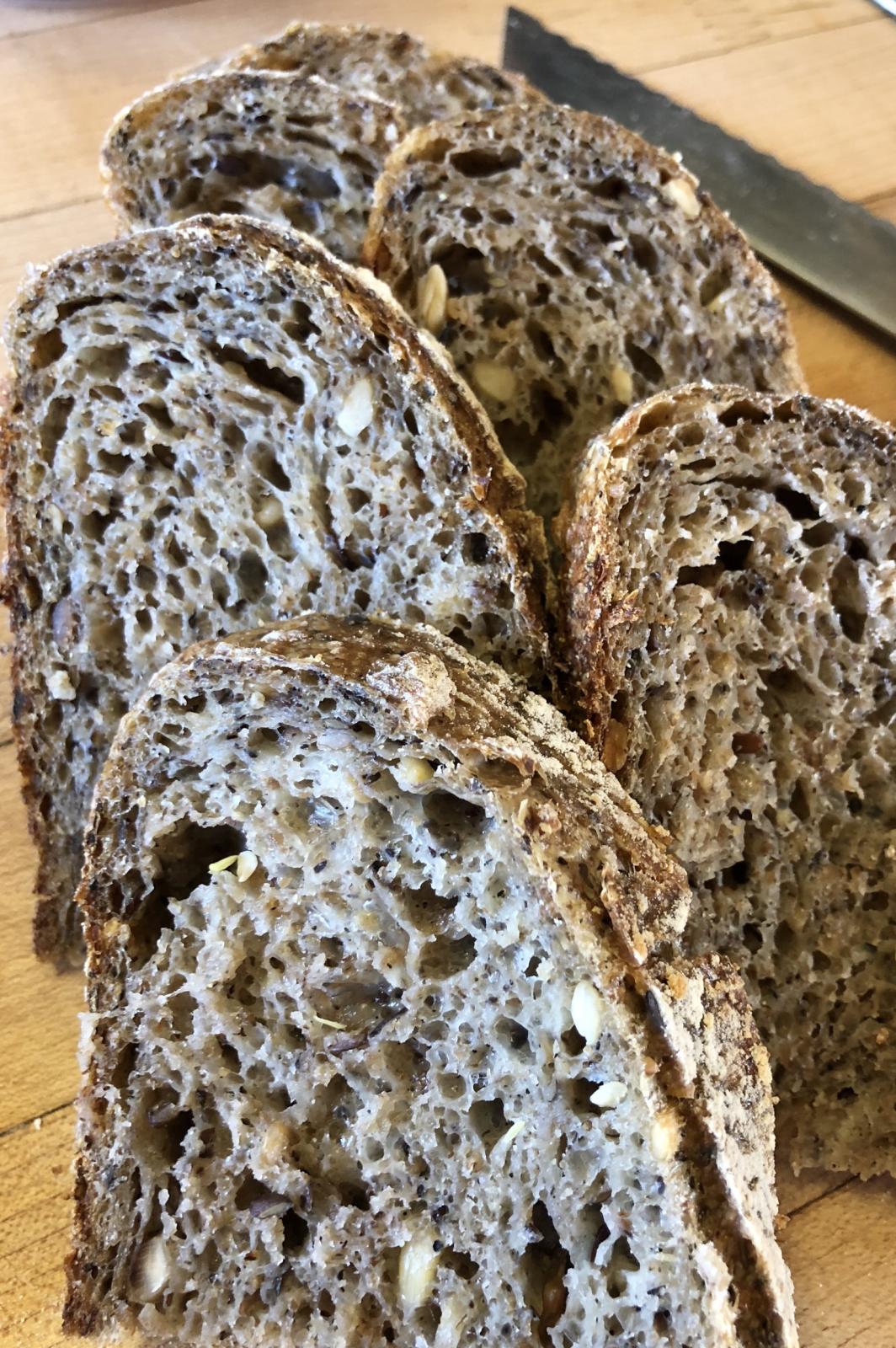 Hi Danni...the bread looks delicious, it's a hearty, nutritious bake and must have a great crumb texture with the additions and high hydration. Nicely done, your pottery group must be spoiled for only really good bread now!

I am impressed - hydration comes out around 115%?  I think the original recipe was 98%.  The absorption of the flours plays a big part but I doubt I could have produced such good loaves at that hydration, lol.

About the gluten, I can’t buy hi gluten flour so I add gluten to my bread flour which is only 11-11.5% protein in an attempt to get somewhere near a hi gluten flour.  With your flours it should be ok.  I wonder what difference it will make if you follow Hamelman’s method of no autolyse and everything in at the start. I can send you his method if you like.

It is great that you still got a pretty good loaf using quite a different method. I also wonder if you increased the absorbency of the grains by milling the rye and oats.  the cracked rye I use is quite chunky.  Food for thought.

A great bake though Danni, and it tastes good too!

if you sent me his method. Looking through the web, it seems like everyone puts their own spin on this bread.

That being said, it is delicious. I brought a loaf to pottery with some bread and dry sausage, and the bread got devoured!

I did wonder about the coarseness if the rye and oats. Mine were not what one would call chunky at all. I will try for a more coarse grain next time. 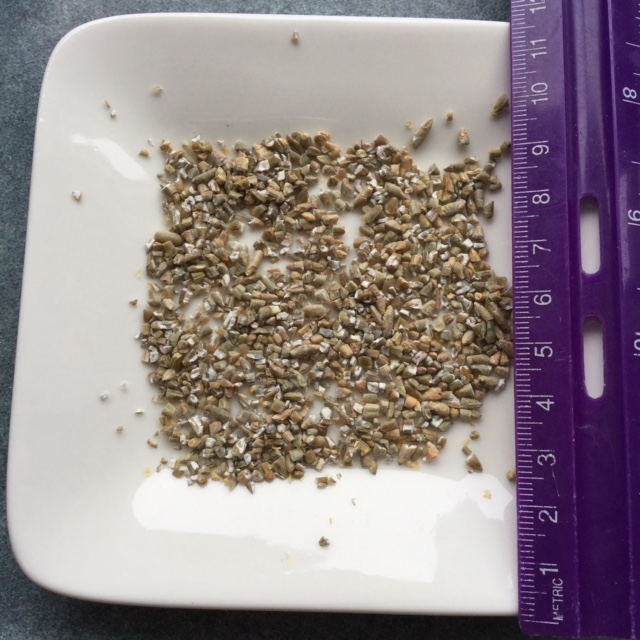 Will send you a pm with details

coarser than what I used! I am going to have to play with my mill to get that.

I wonder if you used the AP flour in the levain or a mix if yiu would have gotten more dough strength and oven spring.

I used the Wholewheat flour because of the bran but I think you are right that I should probably have used just the bran and AP flour instead.

Had to look up selkirk wheat - where do you get it from?

in Saskatchewan. The shipping is a bit of a killer but I order 10 kg at once and it lasts me for a while. That’s also where I get my Rye, Kamut, Spelt, Red Fife and Einkorn berries. Super nice people and all organic. Check them out on Facebook. It looks like a small family operation.

the open crumb  It takes while to drive the water out of the soaker during the bake so it has time to spread but that crumb is also the result.  The bloom shows that it wasn't over proofed.  I would say that this is the perfect result for this bread.  But the taste has to be killer too.  Well done and

No substitute for experience in cracking a case like this, and a recovery due to that knowledge and time in the field to figure out how to compensate.  Rather than just toss the dang thang out the window of the car at 55 mph.

The 5 grain is certainly a popular selection on TFL, and maybe one day I'll give it a whirl myself.  I am probably wrong, but I only count 4 grains, so is there something missing (other than my dignity?) or am not including all of the goodies that I could in my count?

Even with little oven spring, the crumb seems to be plenty open, so can you call this a backhanded success?  It looks it to me!

is the Selkirk wheat. 😉 Don’t feel bad, I did the same thing! Where’s the fifth grain until I realized it was the Wholewheat in his recipe!

what did your dough weigh before you put it in the oven?

750 g like I wrote down in the recipe. I never note what the loaves weigh after baking. They usually loose 14 to 16% if their weigh in baking.

I think dbm is spot on in his comments.

I stick pretty close to Hamelman's ingredients and procedures, except where I make a little change to compensate for another little change. I've always gotten marvelous results. This is such a great bread!

If you change a lot, the result will change a lot. This shouldn't be a surprise. Anyway, your breads look very yummy.