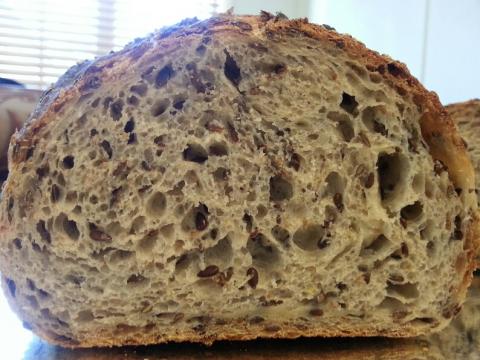 More flavourful with the addition of a small amount of rye or semolina but still very tasty without.

With 50 grams of stiff levain combine the starter flour, water and sugar, knead until combined and smooth and allow to slowly ferment until ripe, eight to twelve hours here atm, in the fridge if required.

Mix the dough of 150 grams of ripe Levain, (I put aside the remaining and knead into it enough flour for a stiff levain ball for the next batch).

385 grams of bread flour, here I decide if I'd like to add a touch of flavour by replacing 100 grams of this plain flour with rye or semolina.

Add the water, salt and milk. *note, without seeds reduce the water to 215 grams.

Knead until it window panes, I use a Kenwood chef with dough hook on speed two for ten to fifteen minutes, Ball and place in an oiled bowl covered with a shower cap.

The seeded dough will be stiffer than non seeded but both easy to work with.

That's all that's left of yesterdays seeded loaf and the semolina one is all gone.

After fermentation pre shape and rest for an hour before shaping.

Brush lightly with milk and sprinkle with seed of choice.

Score and bake in a preheated oven at 230 degrees c / 450 deg f for ten minutes with steam.

Then thirty to forty minutes.

No surprise that it disappears so quickly. What silky smooth dough! Enjoy your bread and all the compliments and requests for more!

I'm a seed magnet.    Lovely bread and lovely fruit bowl as well!  I am major distracted (in a good way) and would love to have that imprint on some of my loaves.   Is that a Samian ware type of pot?

My wife who told me to ask her mother, the fruit bowl was made by her from a ceramic cast from Atlantic mold company.

I like it because it holds a lot of mandarines.

Bookmarked for me to try asap.

Just preparing a word document for your recipe.

This first question might sound very stupid but just to be sure...

1. Is that one tablespoon of sugar within starter build and what's it for?

2. What is the purpose of pre-shape and rest for one hour then shape again? and how long is the final proof after final shape? (as a guideline)

I've also noticed the starter build is 400g and the flour in the recipe is 260g so that is nearly 200% starter. Are you sure the bulk ferment for 6-8 hours won't be too long and turn it all into starter?

The sugar is in the starter because I was getting a lot more sour from my levain than i'd like and this helped make it right and a touch sweeter, I suppose that is a solution for my taste buds more than a recipe ingredient so feel free to leave it out as I know some people don't like to add sugar.

The pre shape allows it to come out of the bowl and degas, then add structure to the dough "aligns the gluten matrix into it's desired shape" (Baking artisan bread) before final shaping.

I don't know on the amount, I'm certainly no expert and this is my first recipe post so if it doesn't seem right i'm open to a few "adjustments", this is just how it's been working for me so I thought i'd share.

The starter is 400 grams and total dough weight 841 grams (not including seeds) making the starter 47.6% of the final dough, the starter is only a stage bring my stiff levain ripe so it's able to happily ferment the entire dough and I can't see how having such a large percent of the flour would affect it, but happy to take advice.

Pre ferment bulk ferment and final proof will have to be to suit your conditions, in the fridge if required.

to make some fine toast!  Well done and happy baking

Reading up on amounts of starter to use and if I wanted to adjust the amount to align with a more standardised amount that others have used, the 1 2 3 sourdough for example.

Purely to work out the amount of starter required and working from the recipies total flour weight of 460 grams as three parts flour, rounded off, two parts water would be the same as the recipe @ 310 grams and 1 part starter of 150 grams.

The starter would therefore be 50 grams of my stiff levain 75 grams of flour and 75 grams of water, 200 grams total with 150 grams going into the dough.

The higher hydration for my recipe than a 1 2 3 sourdough being from the addition of the milk, yes I know the 1 2 3 recipies include the milk in the two parts but i'm only useing it as a guide  to asceratin an appropriate amount of starter.

So it would appear I am useing more starter than is required, adjusting it would not change the outcome of the recipe, would anyone mind if I change the recipe now?

Clearly your method works really well. Now here is where I get confused about sourdough. I have seen recipes with large amount of starter and long fermentation time but I can get nowhere near these amounts of starter and time before gluten breakdown. I don't know how many people do it. It's not as though I live on the equator and they live in the north pole so our room temperatures are vastly different. I understand the flour (not within the starter) equals 100% and everything else falls in line with that. E.g.

Now I can get a 6 hours bulk ferment out of this with time for a final proof. But I've recently tried to follow a recipe posted online which uses around 30% starter and an 18 hour bulk ferment at room temperature which just turned the whole thing into starter (for me). Yet somehow they do this recipe and it works. When I emailed him he said that i'd have to change the flour + starter to find what works for me. Which is true but then why am I following the recipe at all and why does it work for him? Are our starters so much different? Is his starter super slow or is mine super fast?

I put your starter at close to 153% which 400g ripe starter and 260g flour. I'm a bit concerned that 6 hours BF will just be too long yet you do it and get amazing results. This is why i'm confused. So if anyone can explain this to me please do!

The only way this would work for me is to create the 400g starter and thicken it up with the 260g flour plus the rest of the ingredients. Knead till full gluten formation. Then shape and go straight into final proofing.

OK... so i'm open to all suggestion, ideas and answers.

You calculate the water and flour that are in the starter into the calculation, how could you not?

It's flour and it's water, that are in your final dough! whether or not they went in the starter or mixed in later.

Therefore 100% or the whole amount of flour in the recipe is 460 grams, OR 100% in bakers percentage as I understand it.

dough containing the starter and

The percentage of starter was high and as you pointed out, so I have researched it and adjusted it to a more acceptable amount. But it didn't change the total amount of flour or water in the recipe so it should be good.

That's how bakers percentage works. The starter is made up of flour and water, true! However one cannot take the flour within the starter to make that add up to 100% and then calculate the starter again! So in many recipe you'll find two tables of percentages...

1. All the ingredients broken down. i.e. all the flour, water etc, in the final dough including the flour and water within the starter but then the starter is not included on top of that.

2. The flour (minus the flour within the starter) is taken at 100% and everything else in relation to that.

But the flour and water within the starter can't be counted twice.

This is a point which has gone off on a tangent (which is always interesting) but however you calculate it you managed to do it your way. And very well! I hope to do the same and get a loaf as good as yours.

Thank you for adjusting it and going to take a look now.

Looking forward to trying it.

And makes loads more sense to me now.

Thank you so much Macca.

This post by dmsnyder is where I had gotten my thoughts

After writing my last comment I had another think about it and seem to remember that some people do work it out that way too.

Sometimes I get confused but the way I explained is the one that makes the most sense to me (but it isn't the only way).

Just making sure I've got it sorted in my head before I try it. The way you've adjusted it makes sense to me now and confident to give it a try. Just updated my word document.

Is it 50% hydration? Also can you elaborate on this point you ask to let the levain sit for "eight to twelve hours here atm, in the fridge if required." What do you mean by atm? At room temperature? What would the ideal temperature be?

Well I gave it a try and it's ridiculously tasty!

I used malt extract instead of sugar and the sourness tasted nicely balanced with the sweetness and crunchy malty crust. 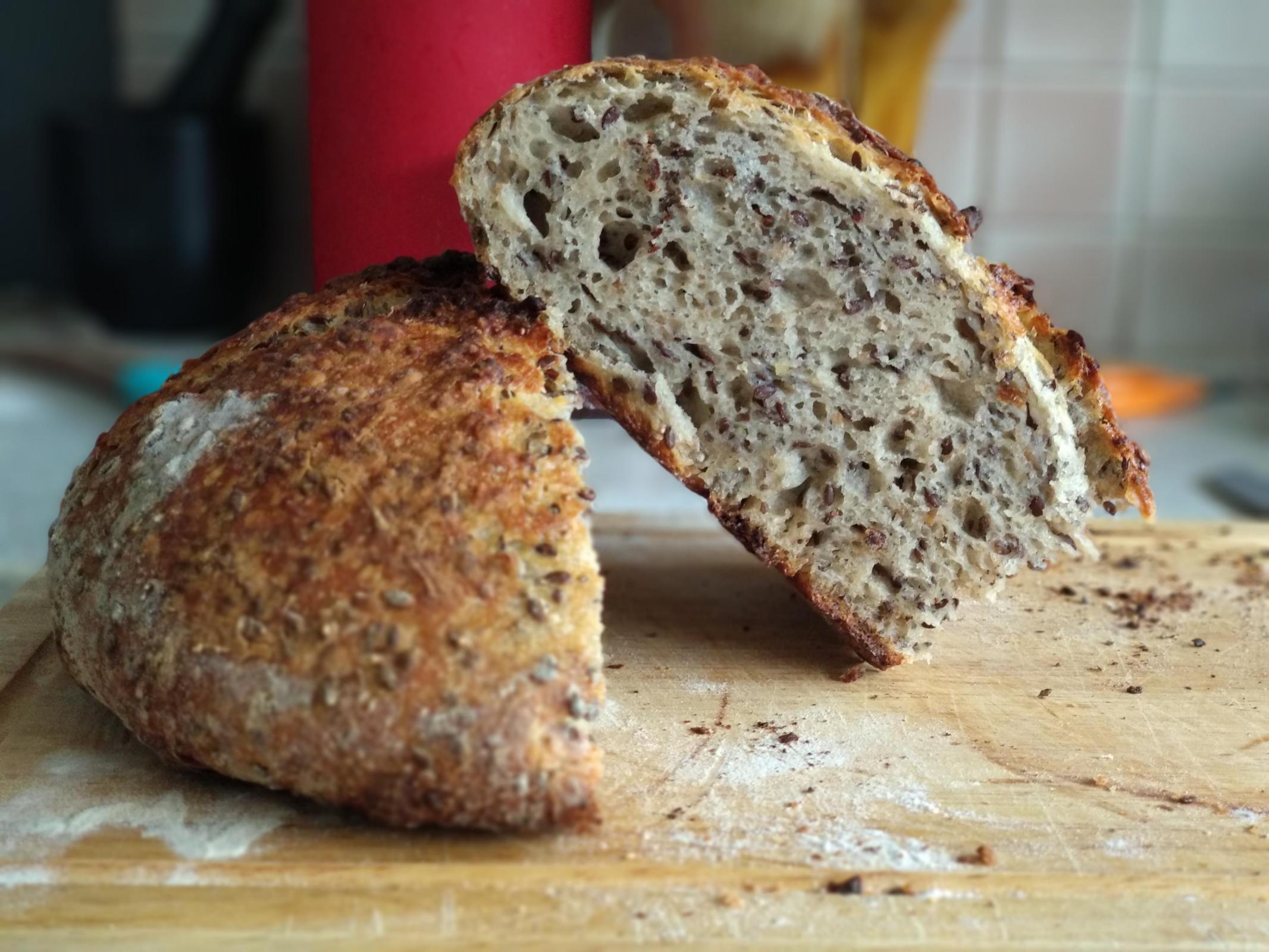 I baked mine in a Dutch oven for 40mins lid on, 6mins lid off.

My loaf didn't turn out looking as lofty as yours and my crumb was on the heavier side... I think i i probably need to do the bulk ferment in the fridge or shorten it to work best with my starter so that it still has enough energy for the final proof and oven spring...

The timings I used were: BF for 8 hours (after the stretch and folds for 3 hours). Then preshape, wait an hour, shape, put in banneton, proof for 6 hours.