This christmas my Dad and I decided to combine our two passions (homebrewing, and baking, respectively). He came up with the idea of making two different types of soakers, a sweet mash of various homebrewing grains, and a sour mash of "acidulated barley malt". I was extremely interested, and so we went out and tasted the malts until we decided which ones to use, and I just eyeballed how much of each, and the rest of the proportions, based on my past usage of soakers in breads (maybe twice). Ended up with: Brown Malt - nice toasty flavor, Debittered Belgian Black Malt - For the color without bitterness, Chocolate Malt - For a deep roasted flavor and color, White Wheat, as a sort of base malt for sugar, and Pale Malt, also for sugars. For the Sour mash we used Acidulated Barley Malt, used in beer styles such as the berlinner-weisse, for its sour character. We then grinded the grains very coarsely by hand, and proceeded with the soakers. This is the recipe we ended up at:

The sweet mash malts were ground very coarsely by hand. I think we actually forgot to grind the sour mash malt.  The sour mash was at 98 degrees fahrenheit (the LB bacteria thrive at body temp), and the sweet mash was at about 145 degrees fahrenheit (no real reason, was actually shooting higher, but we just wanted to get maximum enzymatic action to release the sugars in the malt). We immediately put them into a warmed lunch box, in a warm cooler, and let them sit overnight.

Today I mixed the dry ingredients, added the mashes, then added the water. My initial guess ended up being way too much water so I ended up having to add about 20 oz of flour, and some salt, and adjust the numbers a bit, until it felt kneadable.

Kneaded it for a while by hand, with a few 20 - 40 min long autolyses. It was a lot of dough so it took a while. Ended up being nice and quite tacky but not overly sticky. Let rise until doubled. Degassed/shaped into two loaves and one boule, ~33g a piece.. Let rise until fingerprint didn't pop out again. The boule was overproofed, even though i put it in a 50 degree environment.  Extra hour did the trick and caused a slightly flatter bread than would have been possible. No biggy. The second loaf pan went into fridge for an overnight retard, will bake tomorrow and update blog. Pics: 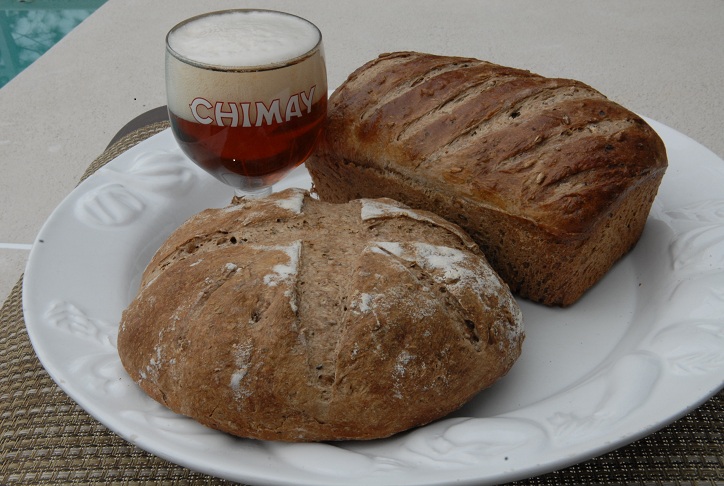 The different malts gave it an interesting "marbled" effect, as the imparted their different colors. 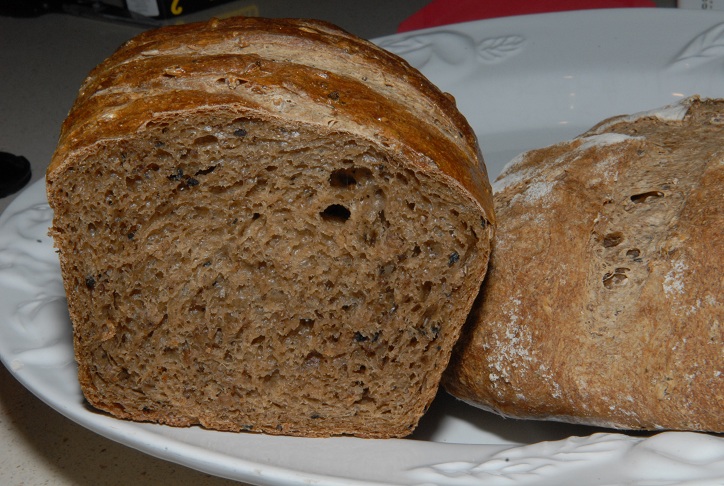 Turned out great, although slightly underdone, and a few of the barley grains were a bit too crunchy(maybe the acidulated malt). Next perhaps time a slightly finer grind, and a longer baking time. Today the final temp was around 200, and I didn't have my instant read digital. Tomorrow I'll make sure it hits 210.

It sounds and looks delicious! Did you get the information from the post I made to your other thread on this bread? It might help you in the future with guessing the right amount of water.

Thanks! It was good. Never had such a roasty flavor in a bread before. And no I didn't get the comment on the other thread.