I wish I had some good bread to balance out the off-topic posts, but I haven’t been doing anything other than our weekly bread for a few weeks.

On to the subject at hand: sausage. I started making this stuff a while ago. My father and I use it as a reason to get together and hang out. He’ll buy a large pork shoulder and we’ll cube it, grind it, and make sausage. I have a lot of fun doing it, but we hadn’t done it together in a while and I had a party for Cinco de Mayo for which I had promised 30 sausages.

Cash & Carry here in the northwest sells vacuum-packed meats at a much lower price than the supermarket as long as you’re willing to buy in bulk, and so I was able to pick up 16lbs of pork shoulder for about $25. It’s a lot of work to cut 16lbs of meat into approximately 2 inch cubes/rectangles.

After I cut it all I put it in the freezer. The idea was to keep it as cold as possible, and it wasn’t going to be in there long enough to freeze. When that was put away, I mixed together the seasonings. I had promised to bring bratwurst, which involves cream, nutmeg, ginger, pepper, and other seasonings. You should mix the seasonings with the meat and let the flavors blend for a couple days. Generally you also mix beef and pork to make bratwurst, but I already had 16lbs of meat to deal with and didn't want to bother with even more.

Then I put it all together on a ¾ sheet pan from the restaurant supply store. I spread it out as much as possible because it had to go into my chest freezer and get very, very cold. If you try to make sausage with warm meat, there are proteins in the meat that will break down. These proteins happen to lock up moisture and fat and they’re why sausages stay juicy.

Then I went to get casings. I had a few other errands to run anyway that would keep me out of the house for an hour or two. The timing was really quite perfect. When I got back, the sausage was frosty enough that it was stiff but still pliable.

I loaded it into my sausage stuffer, which is one of my exceptions to the no unitasker rule in place in my kitchen (kudos to Alton Brown). My sausage stuffer holds 5 pounds of sausage. After the cream and other ingredients, this amounted to about 3 and a half loads. It took three casings to get this: 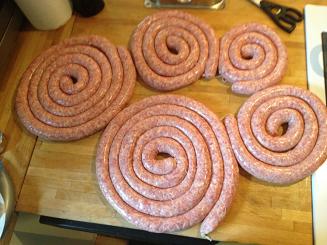 The picture has 5 because two of the casings were cut in half, the first because it was very long and the second to make more room, since by that time my kitchen counter was pretty much covered in sausage. I turned them into spirals for two reasons: One, it made them easy to stack, which made more space available; and two, it looks good.

Then it was time to twist them into links. I measured using both my hands, from one end of my left hand to my ring finger on my right. In my experience this is the perfect length for a sausage that will fit in an average-sized steak roll after it’s cooked. I used to twist the links as they came off the stuffer, which took a very long time, but I learned to stuff the casings a little lighter so that I could squeeze and roll them. Casings are very sturdy and when they're high quality they can take a lot of abuse but ultimately they will tear, so experience is a big help.

This is the end result on my second ¾ sheet pan: 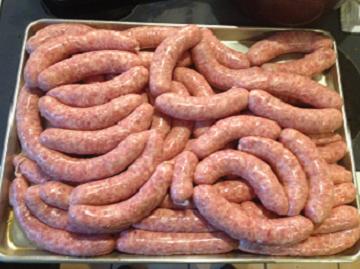 16lbs of pork shoulder plus cream and seasonings makes about 50 sausage links that weigh an average of just over 1/3lb each. I spent about $50 making this sausage, which comes to a little over $3/lb. If I had bought these in a store I could’ve easily paid $7/lb, if not more, for ones made fresh in store. Johnsonville sells theirs for about $5 a package around here. In my humble opinion, that’s a ridiculous waste of money when I can make better myself.

The sausages ‘cured’ in the refrigerator for a day before being used. As I said above, I usually let sausages cure like this for about 3 days in my refrigerator before freezing them. One day is the minimum amount of time I’ll wait. The casings dry out, making the links easier to separate and letting the flavors in the sausage mingle. Ultimately it makes for a much better sausage.

Thanks for the technical descriptions!

must rival the varieties of bread.  Now you have 2 life long quests - no worries :-)

Excellant discription of sausage making. I must offer you this link: http://wedlinydomowe.pl/en/index.php?c=5

Sometime ago and somewhere else on this forum I posted a thread about pigs in blankets made with fresh sausage. http://i1112.photobucket.com/albums/k482/nansssor/2012_0121cardoldcameranew0012-1.jpg