... just got more complicated, at least in East Sussex, UK.

This is the sign put up at the duck pond outside my son's school: 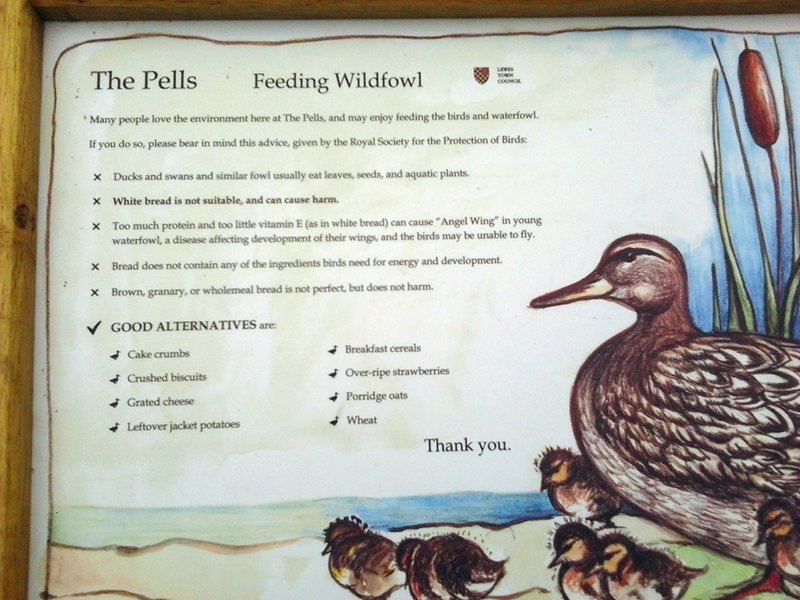 I knew feeding bread wasn't too good for the environment, introducing a lot of nutrients into the environment and essentially helping algae to grow (and I now know that angel wings might be caused by malnutrition), but:

White bread, not ok (the community officers are watching you!) - cake crumbs ok?

Rejected crusts, stale rolls, all went into a brown paper bag in the freezer growing up.  Then, when we headed to the shore on the weekend, we took the "duck bread" with us.  It would thaw out in the car.  The harbor ducks would see us coming down the dock with the brown paper bag and start to converge.  An added bonus was having soggy crackers because these could be skimmed into the air like frisbees to be grabbed by the gulls before they hit the water.  Ahh, the innocense of youth ...

The major difficulties from feeding wild ducks and geese occur when over population, aggressive birds, and degradation of habitat become problems.   Switching from white bread to other human food won't solve those problems.  If, because of over population and degradation of habitat, ducks are unable to maintain a mixed diet and must survive on bread or other human food scraps, the health problems discussed will result.   Bread in a mixed diet is less problemmatic.

In the East Sussex case cited above, local wildlife authorities criticized the local council's ban on white bread as having little factual basis.

(Info gleaned from a variety of web sources.)

We went feeding ducks when I was little, only I grew up inlands, there weren't any seagulls around. Nice memories.

I see you did some research - you must be wondering what's going on in the Old World... East Sussex is quite rural and has a lot of flood plains, an ideal habitat and often visited by migrating birds.

I wondered how many contradictions one can put into such a small sign:

Have a nice weekend,

I'm a retired librarian.  The web is my drug of choice.  Info-evaluation-R- us.  LOL

I don't know if I should laugh (which I'm doing already) or condemn the famous British nanny state infestation spreading into feeding ducks...........:p

Thanks for sharing. :D

a nice moist cheese cake, crumbs or no, would be extra special gourmet food for the water fowl!!  Sadly, we never have any cheese cake leftovers, not even tiny crumbs, around our house ;-)

my husband would have a stockpile of dried old store bought baguettes all over the kitchen.  At the first opportunity we would take them down to the trapped sea water on the project site and pitch them in, whole and in chunks.  Some for any gulls and some to settle down to the fish below, those trapped until the next tide.

Here, we feed carp and trout with left over bread.  One way to dilute the muddy taste of the carp.  So my thought is... if the ducks don't like it, the fish will.  Some ducks can eat fish, fish eggs.  They could even be eating the little fish that come to nibble on the bread.   Soggy bread attracts crayfish….  Anyone up for feeding the ducks and coming home with a crayfish dinner?  (me)  Maybe it's not about the ducks!  Maybe they want to slow down the crayfish.

'Crawfish stalkin' in 50 years!!  Didn't know how much I missed it (and the Ozark Mountains).  It sure sounds fun to me now!  Thank's Mini for the deja vu.

I know that must be an oxymoron! Never heard of such a thing in my house!!

Community Bake - Baguettes by Alfanso
Starter is very active but dough will simply NOT...
I feel like I'm not getting enough gluten...
Beginner sourdough recipe...HELP!
Issues with getting a loaf right (suspicion:...
END_OF_DOCUMENT_TOKEN_TO_BE_REPLACED