Here are my sourdough croissants from Daniel Leader's Local Breads. It's the nicest croissant dough I have worked with thus far.

I was in for a pleasant surprise when I made the beer bread from Jeffrey Hamelman's Bread book.  It was sweet and tasty.  I had my fun turning this into rolls.

I've adapted the recipe a little,  reducing whole wheat,  and using the diastatic malt powder as I just couldn't find barley that I could sprout.

I'm beginning to appreciate the stretch and fold method,  as I do see the impact on the crust.  I'm also learning how to steam my oven such that I get the thin crispy crust.

Check out my full blog here. 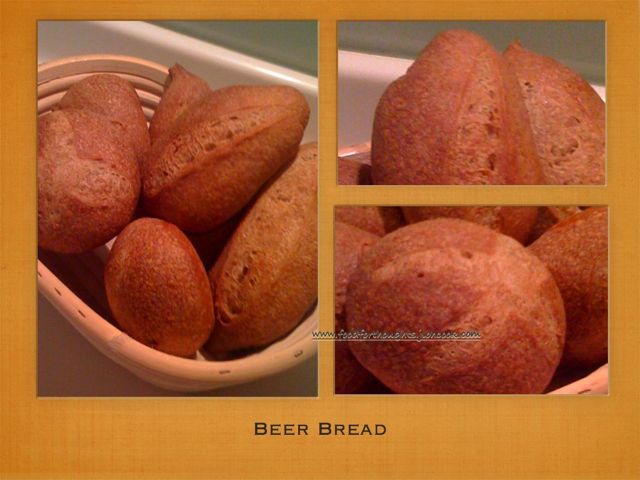 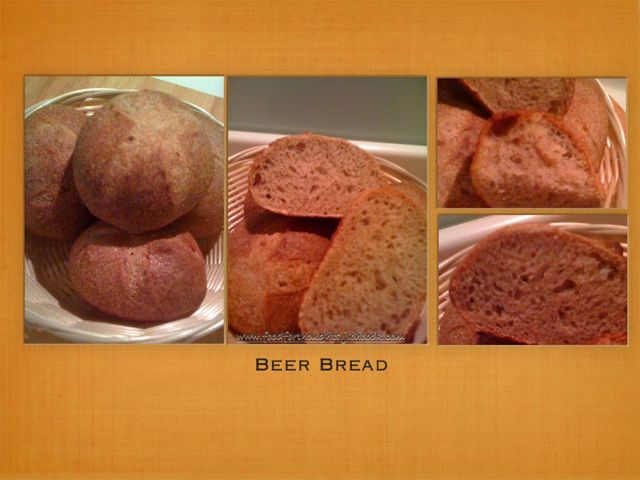 I have used wholemeal spelt for both bread and pasta and also white spelt for bread.

I have used Kamut / Khorasan / Egyptian Gold once for pasta, but am not very familiar with the properties of this flour, apart from that it is very similar to spelt.

I would like to know how Kamut compares to spelt particularly for breadmaking. (Health & nutrition, protein, ease of digestion, breadmaking, taste etc...) ??

and anything else that may be of particular interest regarding these flours?

My wife and I just got back from a little trip down the Washington coast, staying in Long Beach Washington for a few nights. On one of the days we decided to go into Oregon and and down the coast as far as Tillamook. While we were in Tillamook we stopped at the famous (in these parts) Tillamook Country Dairy. It's quite an operation they've got there with a large gift shop and restaurant in addition to self-guided tours. I wandered around the gift shop while my wife was sampling some of the cheese and came across this interesting pan. I figured I could use it for something even if I didn't know exactly what it's real purpose was. There didn't seem to be any posted info about it in the shop and the place was so busy I couldn't find anyone to answer my questions about it. So if any TFL members know what this is used for and have a recipe to go along with it, I'd greatly appreciate it. 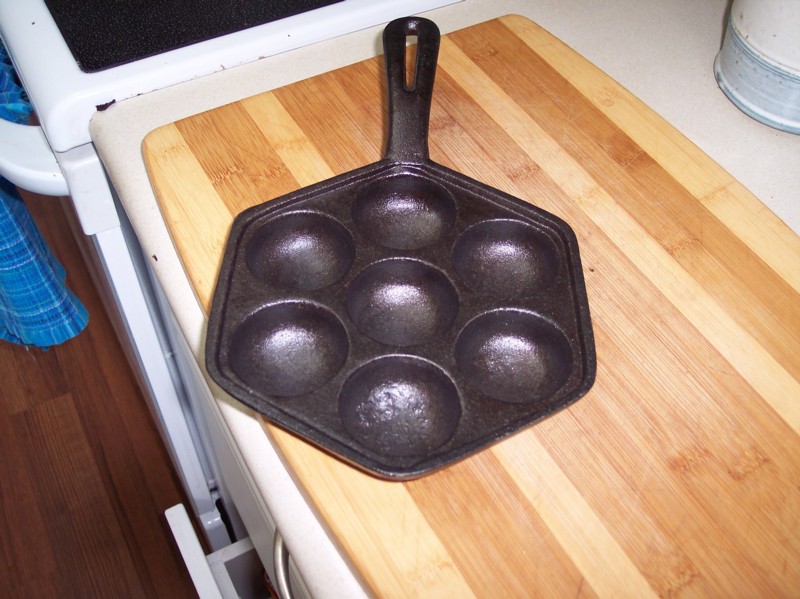 The main differences are:

The all-purpose flour was not King Arthur flour.  It was the unbleached all-purpose from Costco (I don't recall the brand).  The bread flour was from Central Milling.

I mixed them both by hand and tried to do everything else as similarly as possible.  This is obviously not a very scientific approach to comparing the two fomulas becasue there were so many differences.  Oh well, all the results tasted good.

Here are the results.  Two tarts filled with a frangipane made with almond paste and pastry cream flavored with li hing powder.  The plums are fresh off the tree in my back yard.

Here are the two tarts, KA first and ABAP second: 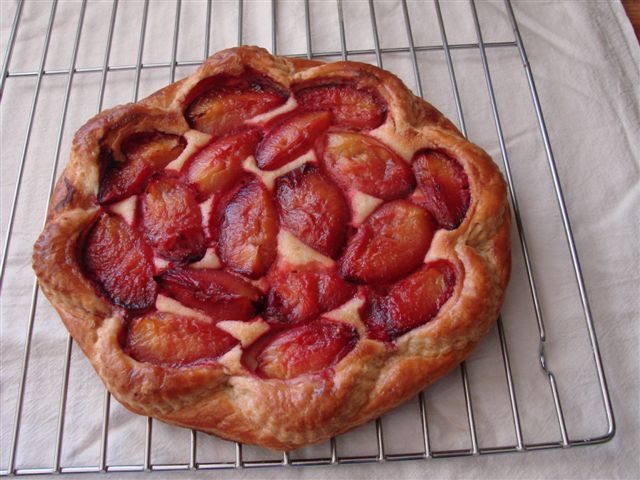 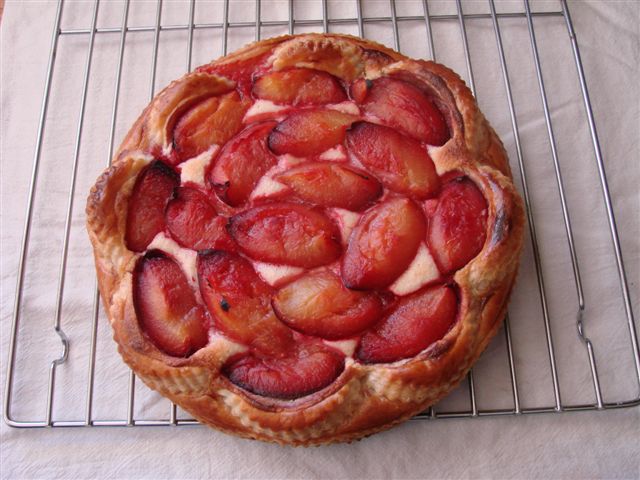 Here's a closeup of the KA crust: 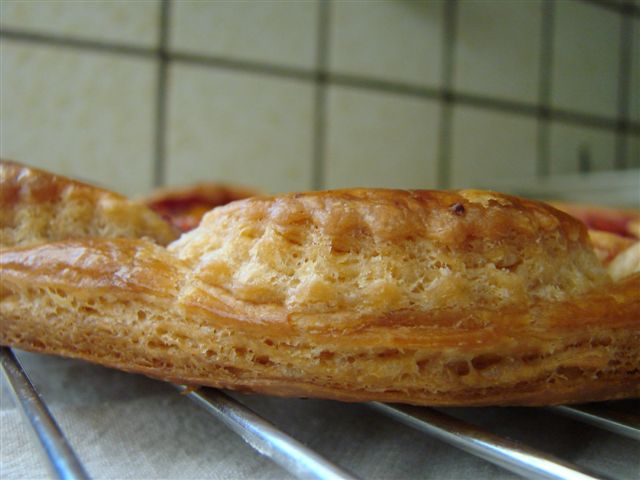 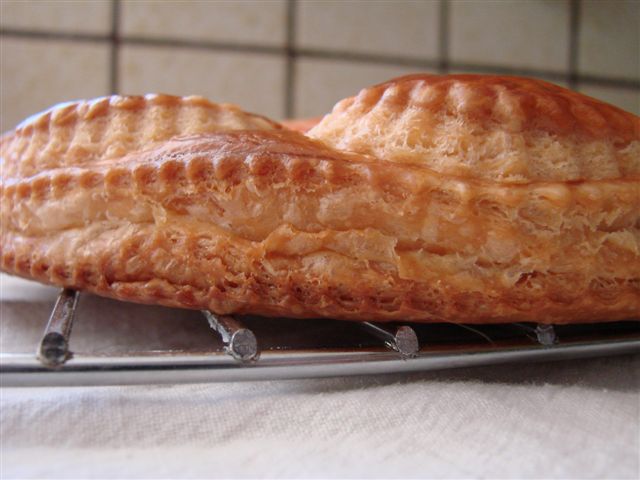 Here are shots of some scraps that I baked after the tarts were done.  KA is on the left and ABAP is on the right. 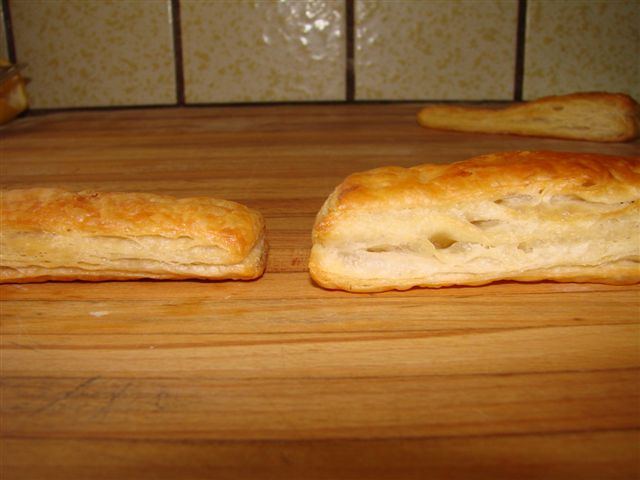 One odd thing I noticed is that with the same amount of resting of the dough before cutting out the disc the KA formulas dough took up in the oven and became oval whereas the ABAP formula dough remained circular.  Here you can see them.  KA is on the left and ABAP is on the right. 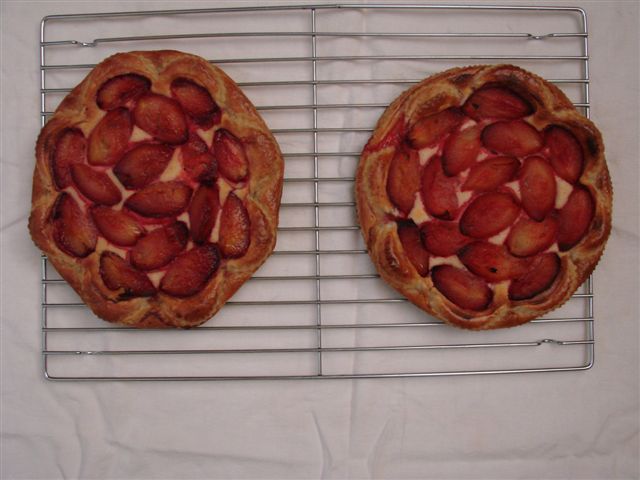 I have been experimenting with "atta" flour called for in many Indian flatbreads (such as naan, poori, chapati breads, etc.)  It seems to me it would be similar to some of the higher ash flours of french baking.  Can anyone give some insights to the similarities and differences of these flours?

baking a lot of loaves--help!

Hello all--I am hoping to benefit from some TFL's patented expert advice and experience!

My father is having a 60th birthday party in July, and I offered to make the bread for the event. It's going to be a big open house, so lots of nibbles--bread and cheese being of course the world's best nibble option (IMO). I want to make 3 different types of breads, all of which I've been getting reliably good results with when baked as a single batch: sourdough baguette, walnut levain, and herb foccacia. I am thinking of making a triple batch of the baguettes (6 loaves), double batch of the levain (4 smallish boules), and a double focaccia (2 pans).

Here's my dilemma: my oven is TINY. It can really only fit one pan at a time (so, two loaves, or a single focaccia). And my fridge isn't so big either. So, I'm thinking of (trying to) mix/let rise all the dough the day before, having it proof overnight in loaf form in the fridge, and then baking everything sequentially in the morning. Does that seem feasible? And, some questions...

Should I make large batches of dough, or stick to the quantities I know I can handle? (I'm mixing by hand.) Is there a better time to put dough in the fridge for a "holding pattern"? Can I bake the loaves cold from the fridge? What about the focaccia? Any other tactical suggestions from the experts out there? (Is there anything else in particular to be careful of?)

Best Crust and Crumb yet! For me

This is a 50% wholewheat from "BREAD". I have finally achieved the color i wanted and the crumb texture i like. THis is a keeper.

To obtain the color, I have improvised enclosed steaming for this one:

Poultry roaster with lid. Under the roaster a stone, and in the roaster lid: a stone squeezed-in in such a way that it dented the lid, but remained in. This way, i can get heat from a stone on top of the loaf, and from under the loaf, all in an enclosed space to trap steam. IT Worked!

Here are the loaves: 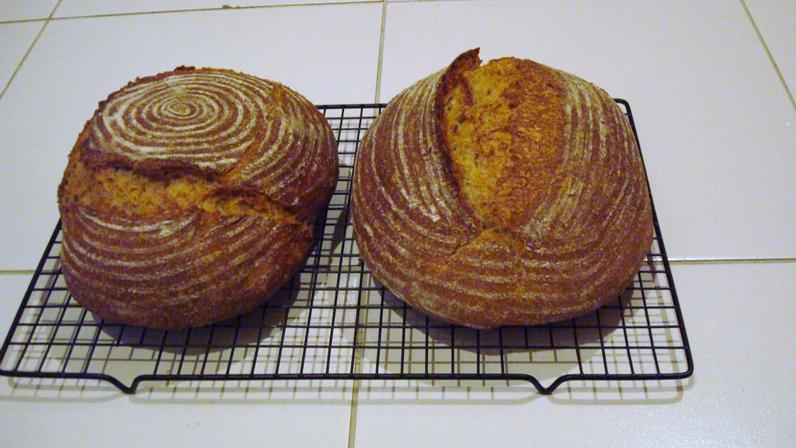 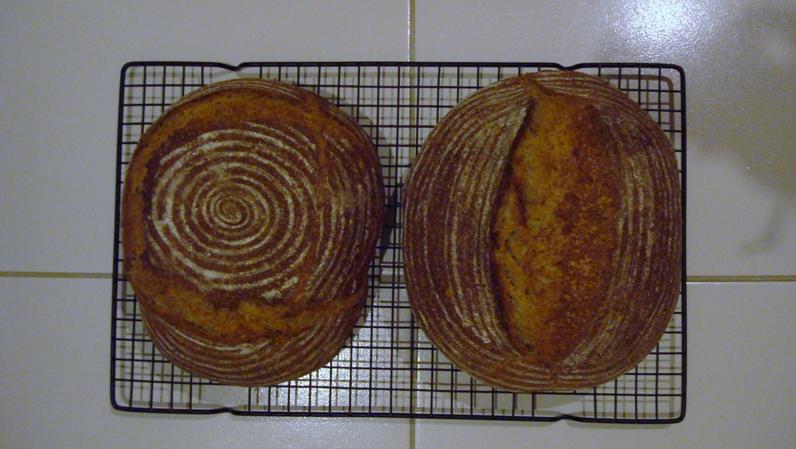 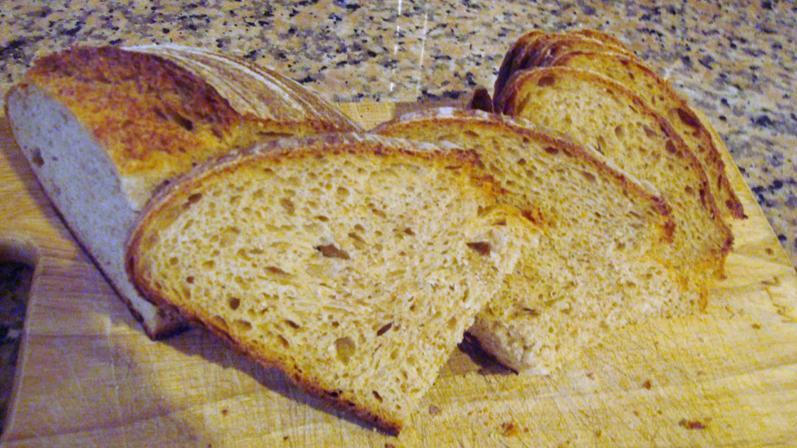 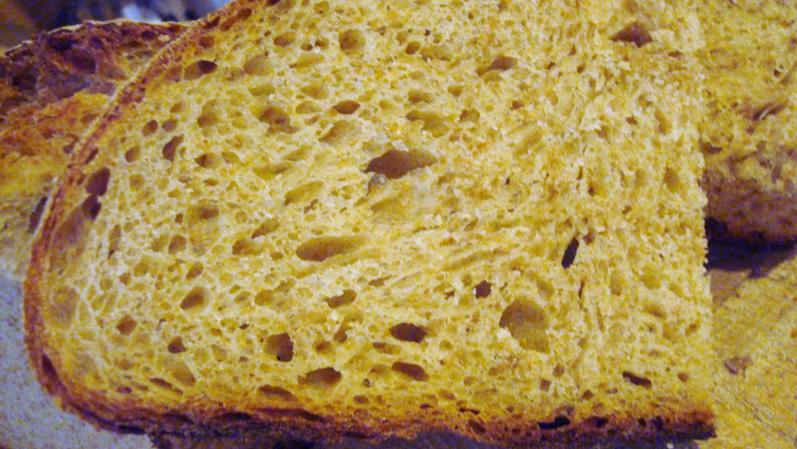 UPDATE:  here is the roaster steamer with stone device: 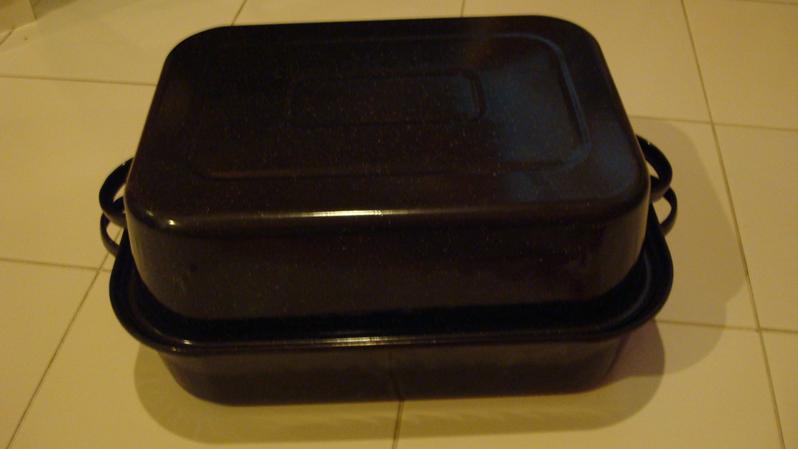 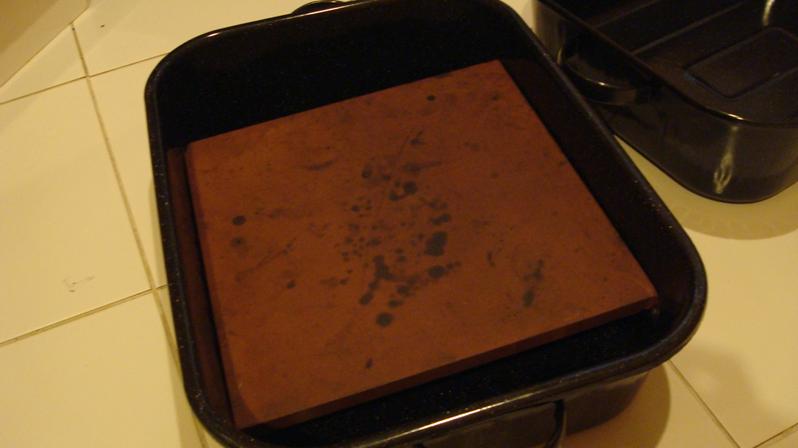 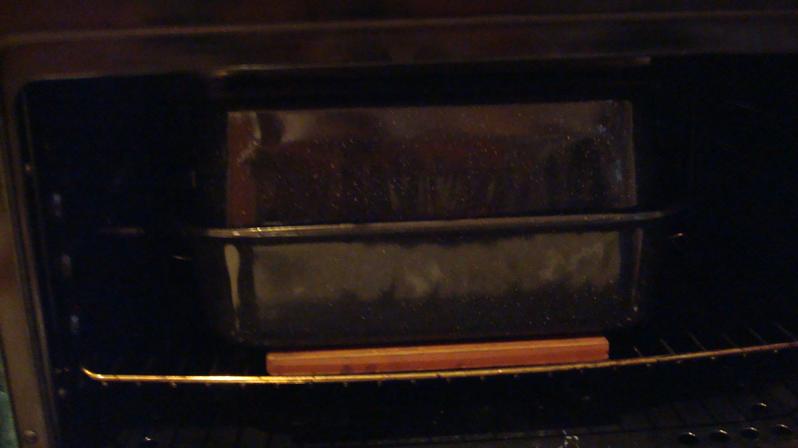 How to bake a large batch of Artisan breads

I learn how to make many Artisan breads from TFL site and really enjoyed it.  For about  a year now I enjoyed  baking breads for my family and shared it with friends.  Early this year I  have an opportunity to sell breads at my Community market by buying it from a wonderful bakery in Roanoke, VA.  I have since quited doing so since it is 70 miles round trip and I earned very little from this venture after taking off the expenses!  So, I am selling my own sourdough and regular breads at the market and customers love it.  My problems is my mixer only can mix two loaves at a time and baking (heart baking) only can be done only in a small amount on home oven.  I could only make about 12 loaves at the most starting on Wednesday for the market on Sat.

Now, I have a problem,  I don't know how to manage a large batch baking since I am only had experienced baking only two loves at a time!  I used the bread machine to mix the regular  breads and the regular mixer for sourdough.  I also have a regular size refrigerator for retarding the dough.  Is it possible for me to do it or just forget the large batch?  I would love to bake large quantity for the market but I have no clue.  Please help.