First of all, kudos to everyone who has worked to make this such a wonderful, educational site. I am looking forward to participating in the fun here on Fresh Loaf.

I have been baking from Artisan Bread in Five Minutes a Day, and the BBA, for several months now, but have had no other experience of bread-making during my 69 years of life. I thought that Artisan Bread stripped things to their esentials until I came across Lahey/Bittman bread on You Tube. Made a pot yesterday, and must say the first time was a charm.  The crumb and crust are obviously excellent looking (though the crumb may well be too thick for some people), but I found the taste a little disappointing, after the long --- 19-hour ---- ferment. It was good, but not nearly so good as some Ancienne baguettes I made recently following BBA religiously. With those loaves, I died and went to heaven.

I have two questions: (1) does maxiumum taste seem to be an issue with this manner of baking? (2) if the fault was mine, does anyone have any suggestions re getting superior taste when using this method?

There are couple miches I have baked.

One of the largest breads I have made. Pretty much the same as MC interpretation, only I didn't retard and hydration was lower, about 65%.

I bought some tiles at Lowes, and the employee there showed me some unglazed tiles that he would recommend for baking. But since he didn't have any experience or people asking him, I searched online for some info on the tiles.

So far I found out an answer to my question.

Do I need to seal the Rialto, Botticino, Positano or Murano series tiles carried at Lowe's?
No. During production process there is glaze incorporated in the mixture to help prevent stains.

So does this mean it's not safe to bake on since there's glaze incorporated into the tile mixture?

I've been browsing the site for a while now, but after my n-th not very good whole wheat loaf, I'm writing to check if anyone can please give me some pointers on where I'm going wrong! Basically, my bread bakes up quite dense, and it nearly does not rise at all in the oven.

I have tried Peter Reinhart's 100% whole wheat recipe. Some changes I made were

- I use the regular atta that we use for chappatis at home. We get the wheat ground ourselves. But I do not know if the wheat is hard or soft.

- I seem to end up using a lot more flour (nearly 1/2 cup more in today's loaf) since the dough kept sticking to the work surface. I'd knead it and put it on the counter, and it would start sticking. I can keep wetting my hands and kneading it (like I do for chappati dough) but I'm afraid I might get too much liquid into the dough.

- I use buttermilk for the soaker, but its nearly 40 degrees C here (in Ahmedabad) and I can leave the soaker out only for about four hours before it begins to get sour.

- The risen dough always has tiny holes all over the surface. Am I letting it rise too long?

- I have a little oven (of about 34 L capacity) that we keep on the counter top.

If anyone can suggests anything that I doing obviosuly wrong, please do let me know. I'd like to know if I can get a better crumb without adding any other ingredient to the list.

Thanks a lot. Would appreciate any help!

The best baking show ever broadcast

You have to be "of a certain age" to have seen the best baking show ever broadcast. It was a demonstration of making a Banana Cream Pie by Marshall Efron, an episode of The Great American Dream Machine broadcast on PBS in 1971.

I've thought of this landmark broadcast many times over the years and wished I could view it again. Well, I found it this evening, and I want to share it with you all. 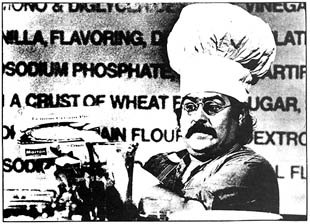 Hello all, my name is Aivaras. Long story short, more than half year ago i decided to try baking bread, or at least something resembling bread, because I've never baked anything, and then i found TFL. I want to thank all members on TFL, because almost everything i learned i learned from here. I'm starting blog to post some of my older bakes and to try to post after i bake something.

This is Boule (baked on 5/02) i probably would not have baked, except that I made mistake when preparing starter for my weekly bake of Gerard Rubaud bâtards. I was preparing last build for starter and accidentally ended with 100% hydration starter which i decided to refrigerate shortly after mixing. While it was staying in refrigerator, I saw breadbakingbass post and since I had Malted Barley flour which i never tried to use, i thought to give it a try.

After 48 hours dissolve starter in water, mix only with T150 and Malted Barley flour, cover tightly and leave at 25C for 45 minutes.

Lightly shape into boule, place in lined basket and proof for 2 hours.

Been looking forward to make this bread. Finally got my Durum Flour in the mail (not available at local stores). Followed the recipe from Rose Beranbaum's The Bread Bible. Flour (bread:67%, durum 33%), Water 80.4%, Yeast .79%, Salt 2.2%.

Worried that I totally ruined the dough. I allowed the biga to ferment in a cool area for 24 hrs (recommended @ 55-65 F). I thought my storage room is that cool. When I checked the room temp it was 72%. 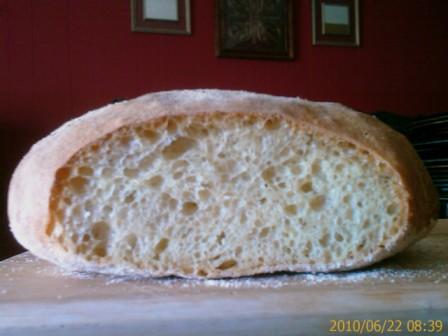 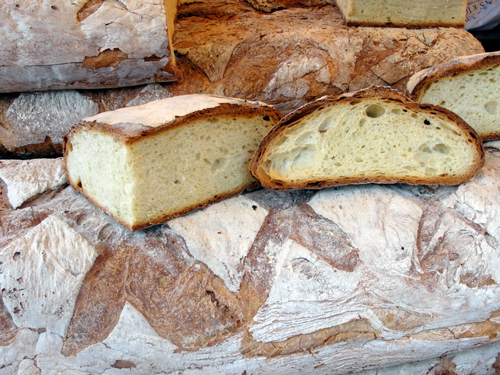 Without going through the practice of making bread and everything,  I wouldn't have attempted this. As this delicacy requires techniques as complex as making a baguette,  and patience that is required in making sourdoughs.

This is to share with you here a different type of food we make in Asia.  The Nonya Rice Dumpling.  To share with you on how it looks as some of you may have read my blog mentioned under Vermont Sourdough.  It is not baked but boiled for 2.5 hours submerged in water.