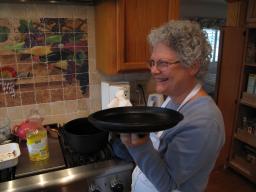 Finally got around to posting my "Izzy's" bake.  I posted it here:

As I said, "Beauty is but skin-deep."  Read on and see what I mean.  I think it's a general comment on the importance we place on photos of our bread.  As Peter Reinhart once wrote, the proof is in the tasting!

Today, I baked 2 loaves of New York Deli Onion Sourdough Rye from The Bread Baker's Apprentice.  They look ALOT better than the previous attempt.  It's amazing what can happen when you watch the bread and make sure it doesn't overproof.  I'm still getting used to my make-shift microwave proof box.  The temp in there is about 80F so proofing loaves goes really fast.  I also reduced the amount of yeast in the bread to 1 1/2 tsp. instead of 2 tsp. which had seemed pretty high considering there is also a good amount of rye sourdough starter in the bread as well.  Here are my pretties - 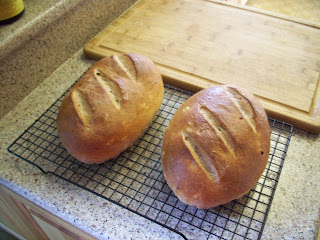 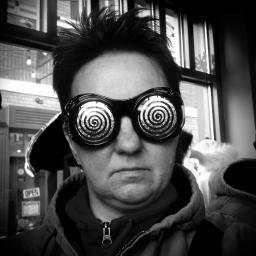 Sourdough is as old as humankind, or at least that is what I would like to think. This is how bread baking must have started: let a bowl with hydrated flour stand somewhere, and magically it rises at some point. It took mankind until the 17th century to figured out what organism actually worked that magic.

I Have blogged about my first 66% Sourdough Rye before Here, but this time, its more like what it should be: close textured, more sour, More Rye-ish. This time i used Medium Rye (I mixed sifted Rye Flour with Whole Rye Flour in 50/50 ratio).

The fermentation happens faster when whole rye is added, and my bulk fermentation was 45 minutes only. As expected, the dough never came together as it would with lower Rye breads, but the falvor of sour rye was very pronounced.

I guess that this is how Hamelman's 66% sourdough Rye may really look like. 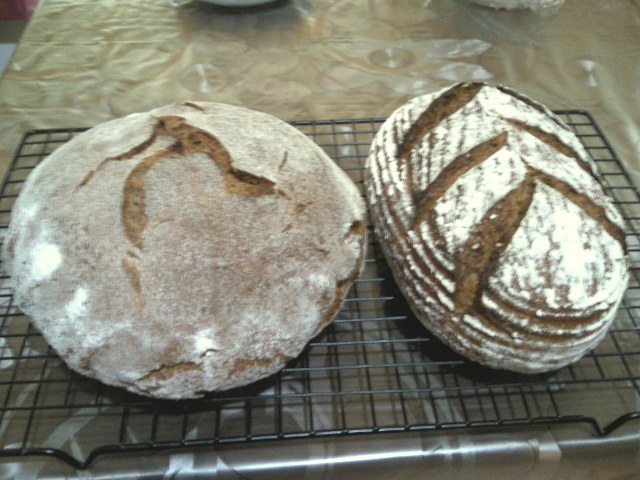 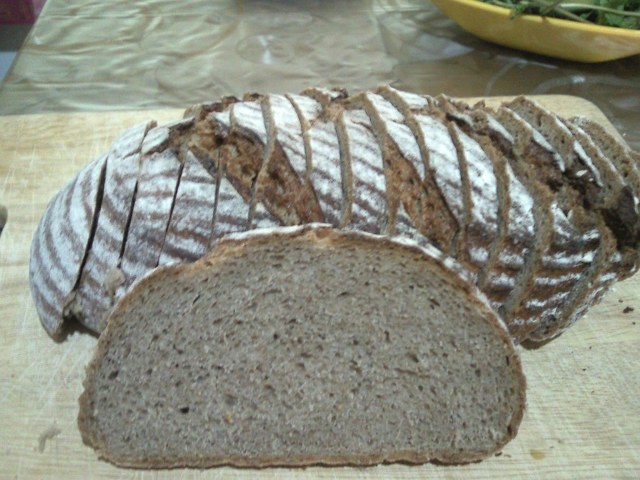 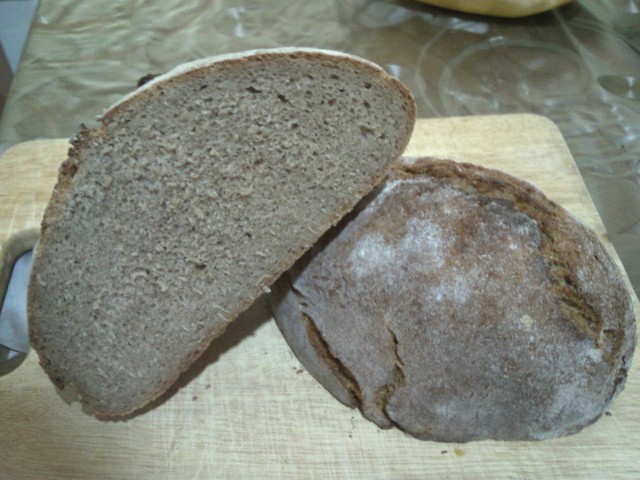 This is the “80 Percent Rye with Rye Flour Soaker” from Jeffrey Hamelman's “Bread.” It's a wonderful bread about which I've blogged before. (Sweet, Sour and Earthy: My new favorite rye bread) These loaves were made applying a number of tips and tricks contributed by a number of TFL members, and I have to say, I was pleased with the results of every tip I used. So, a big “Thank you!” to MiniO, hansjoakim, nicodvb and the other rye mavens who contributed them.

I followed the formula and methods according to Hamelman, with the following techniques added: 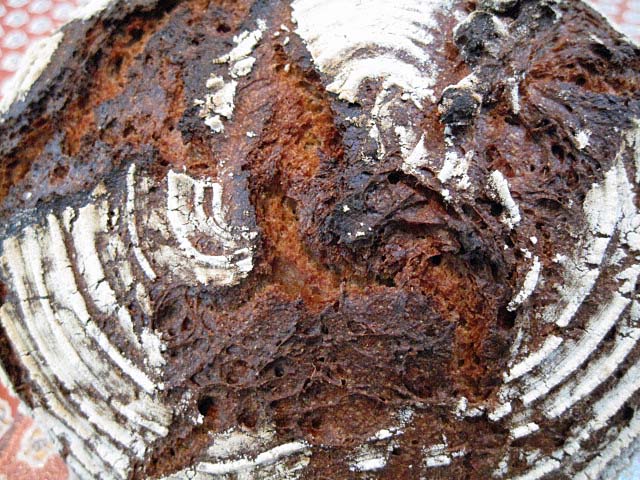 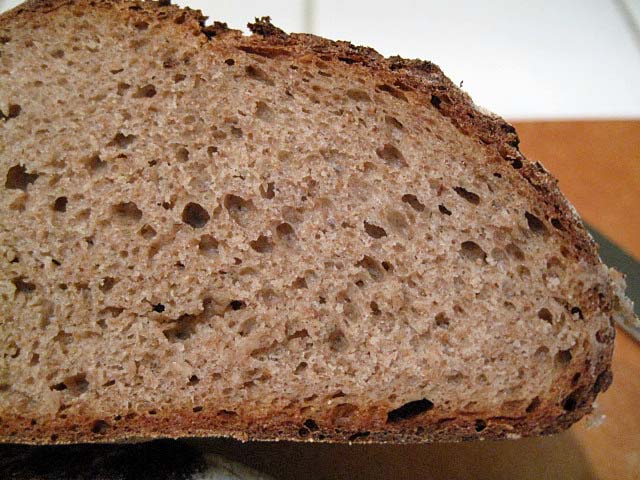 I am very happy with these loaves. I'll continue to use these techniques and recommend them to others struggling with high-hydration, high-percentage rye breads.

I finally tried this recipe and I certainly was happy with the result. Thanks to Eric for the recipe.  It one of those that are on my repeat list certainly. 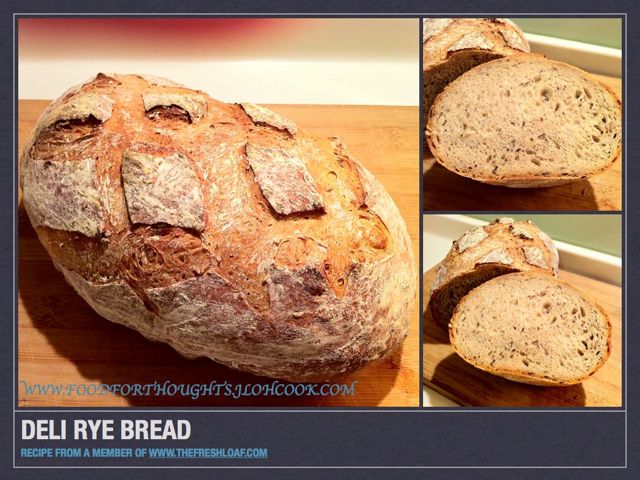 First, thanks to Eric Hanner for this post providing inspiration to explore covered cast iron cooking recently:  http://www.thefreshloaf.com/node/21006/my-combo-cooker-experiment.  This is my second bake with cast iron and I like the results!  Flavor and texture were awesome!

I already owned a 5 qt Wagner Dutch oven with a glass lid that has been in the family as long as I can remember.  The diameter is the same as the 3 qt. Lodge combi cooker - the higher capacity of the Wagner being due to taller height.  So I had vessels that would allow two similar sized loaves to be baked at once- albeit with one having glass and one having cast iron cover.  Both loaves came out identical 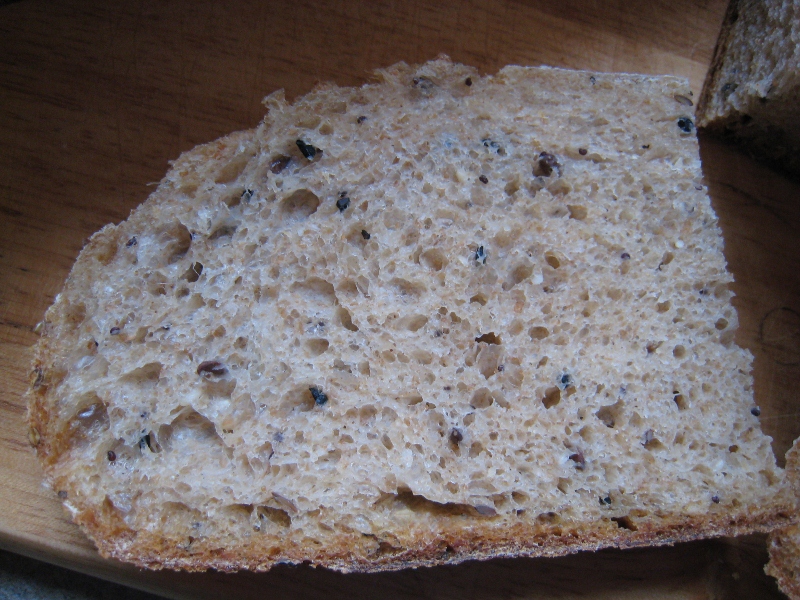 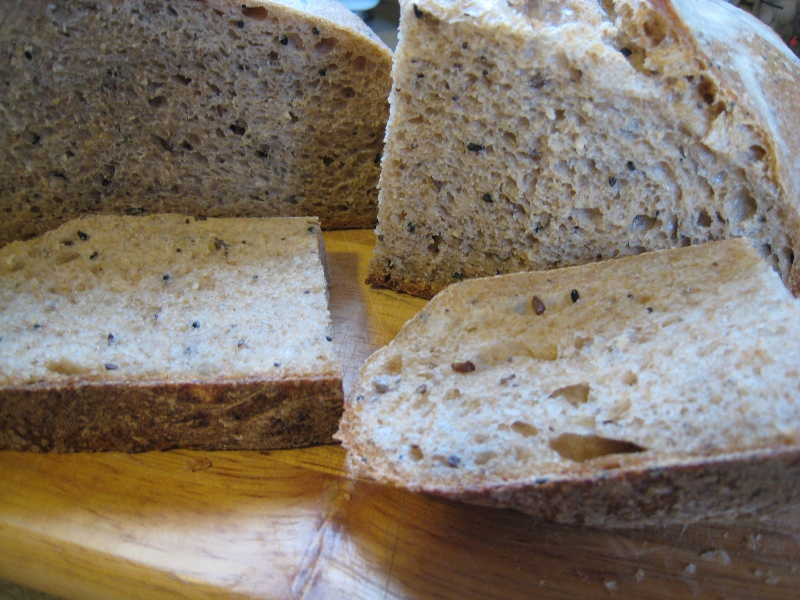 Note: While the loaves came out nice, the crust is not rock hard as Eric was striving for and as was pointed out in his post/link above.   While my crusts were not rock hard after a 30 minute cover, I am still happy with the outcome.

Perhaps next time I will leave the temp higher and in the oven longer to see what impact that has on the crust. And not spray dough after putting into Dutch ovens?  Or perhaps shut the oven sooner and leave until 210° or so internal?  Any suggestions on that elusive crust would be appreciated! 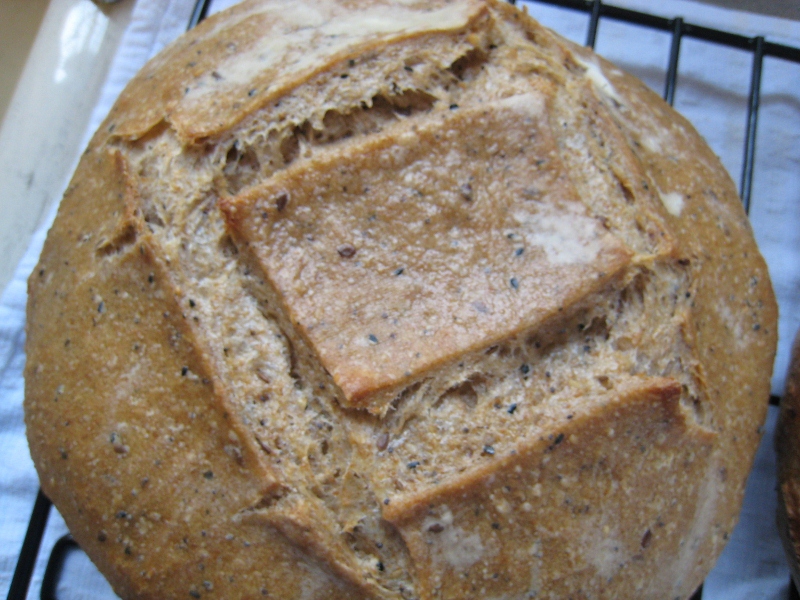 This is a late bake from Hamelmans "BREAD", chapter 6: Sourdough Rye with Walnuts, only with Walnuts being left out (no stock). This is essentially a 50% Whole Rye Bread. I used HOVIS bread flour for remaining 50%. most of the Rye inthis recipe is fermented.

Obviously, i have done a lousy job on proofing seem side down. I had hoped to get the artisanal effect that Hansjoakim had: here. Reason may be my boule shaping, DMsnyder would you chime in here for an advise of your boule shaping experience from SBFI?

Having observed Hans Bake, i also increased the hydration to 75% to obtain a somewhat loose dough. I have used Whole Rye instead of Hans Medium Rye. 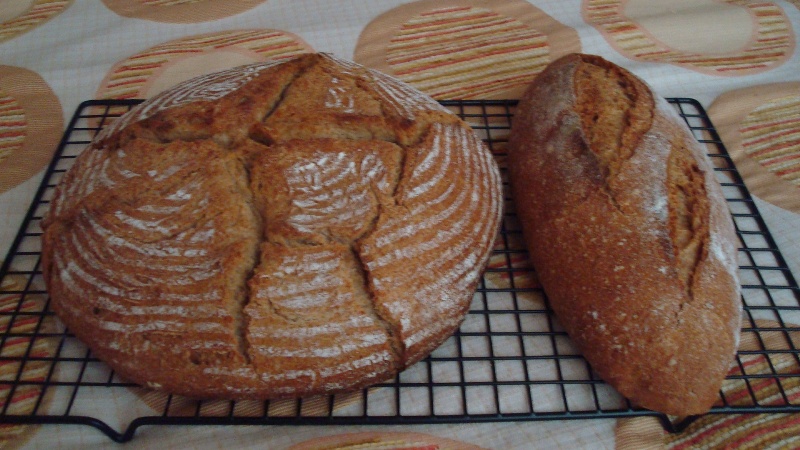 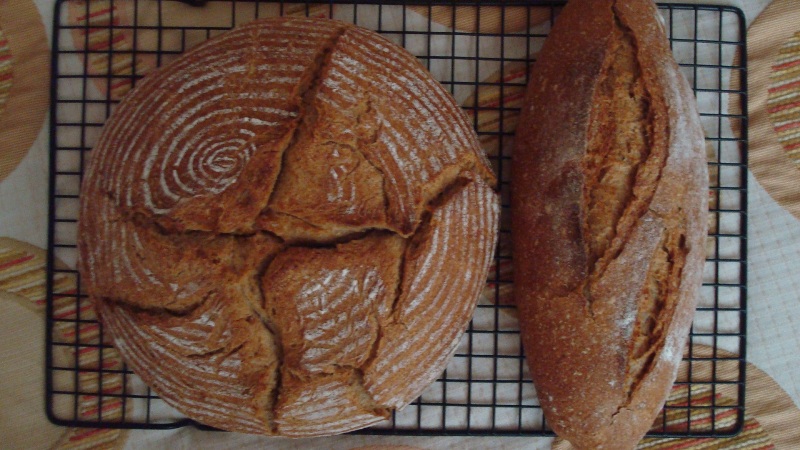 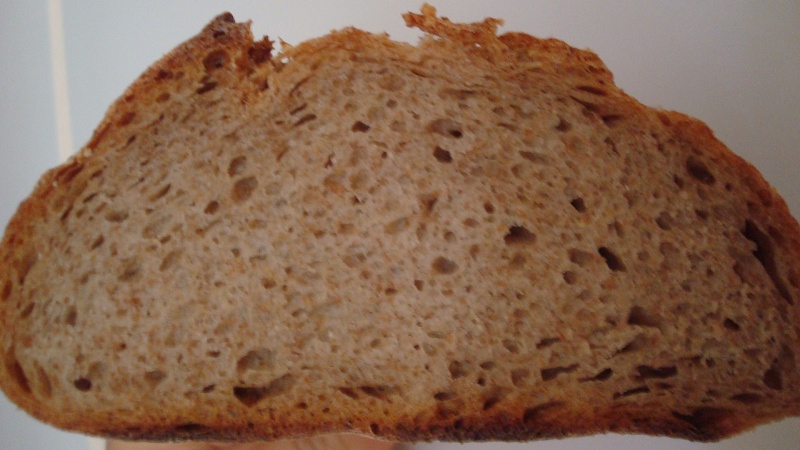 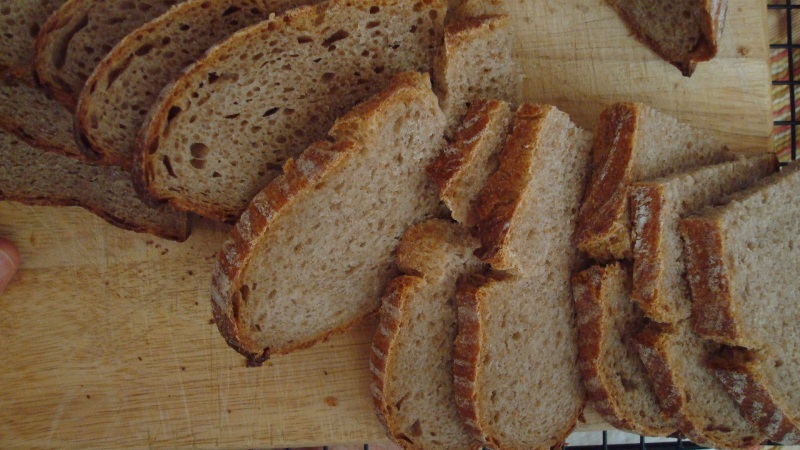 I haven't tasted the loaf yet, but i trust in hamelman's recipe.

UPDATE: now that i tasted the loaf, it is typical of 50% Whole Rye surdough breads: mild sourness, with earthy rye flavor. I think the walnuts were in the recipe for a reason. I'll add walnuts for sure next time.

Thank you, Sourdo Lady.  About ten days ago I finally decided to put off the procrastination and begin my own sourdough starter.  Having read many various instructions (Beranbaum, Hamelman, Williams Sonoma, et al), calling for the use of flour, water and time, and if the desired results are not produced, throw it out and start over, I decided to take Sourdo Lady's explanation and logic to heart and put them to the test.  Armed with a fresh bag of rye flour and a small can of pineapple juice, I started and five days later, I had a bubbling seed starter.  Now to put it to the test

I followed Beranbaum's instructions to convert the liquid starter to a stiff starter and then expanded it enough to make sufficient for two recipes: her Basic Sourdough Bread and her Sourdough Rye, both from The Bread Bible.   I had enough starter to double the recipe for the Basic Sourdough Bread, so I did.  I put the remaining starter (for the rye bread) in the fridge to retard another day and set out to make the Basic Bread.  According to the recipe, this is a rather wet dough (at 68%).  I followed all the instructions except for the mold for the shaping.  Instead of using a banneton or colander, I shaped it as two batards and set them on parchment, using rolled kitchen towels under the parchment to provide a support ala cloche.  So far, so good.  After three hours, the dough had risen , but perhaps not enough.  I sprayed them with water, slashed them and slid them into the oven with steam.  The result - ciabattas, or what looked like them.  The slashes I had made appeared not to have been deep enough or had closed up very quickly.  The dough spread out on the parchment.  It rose, but not very much.  The result - crunchy crust but a relatively heavy and dense crumb.  It had plenty of gas holes throughout but remained heavy, nonetheless.  After cooling, I cut one of the "loaves" into thirds and then sliced one of the thirds horizontally.  It was edible, but I wouldn't give it any prizes.  I am not sure what went wrong, so I will not send any photos or ask for advice until I can repeat the recipe in the future, this time without doubling it (in case that was part of the problem).  We will see.

The success story was today when I made the Sourdough Rye.  This is a 63% hydration recipe, 17% rye.  I worked the expanded starter into the final dough yesterday and gave it two hours at room temp, with the requisite Stretch and Folds (Business Letter Turns).  Then into the fridge to retard until this morning. I took it out this morning and gave it two hours to warm up and then worked it into a batard shape (again, no banneton available).  After a two hour proof, it had risen nicely so I sprayed it, slashed it and slid it into the oven.  Fifty-five minutes later it came out of the oven to cool.

Nice color, nice crust.  When it had cooled, I sliced it and took photos.  I am happy with the results, happy that I have seed starter working away in the fridge for the next atempt, and I am anxious to start playing again.

Sourdough Rye - Big, bold and beautiful with seed, herbs, and hot pepper- all on a whim

As my baking evolves I am drawn more towards hearty rye sourdough breads in the northern European style.  I also like big and bold flavors that complement the rye and sour nuances of the bread. 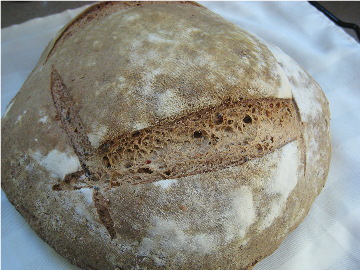 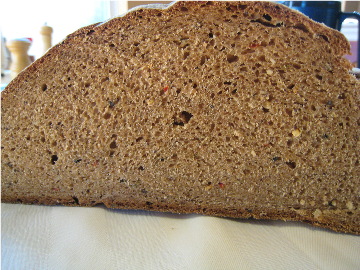 Thus my spur of the moment decision to also add the following to my 2.5lb loaf:

The bread itself is 25% whole rye and 40% whole wheat (both fresh ground), bread flour for remainder.  My rye starter (100% hydration) was in full force by 5pm.  I added rye and whole wheat to make my basic sour which was approx 50% of the recipe plus all of the seeds.

After 5 hours of fermenting I added the herbs and remaining ingredients targeting 68% hydration.  30 minute autolyse then mixed until gluten was developed.  There was only one stretch and fold given the high percentage of rye and my preference for developing the gluten early via the mixer in this style of bread.

After kneading there was a 10 minute rest followed by pre-shaping and another 10 minute rest.  Shape into boule’, place in linen lined basket, cover top and place into a plastic bag.  Let rest overnight in refrigerator for an 8 hour fermentation.  The next morning I removed from refridgerator for the hour it takes to preheat oven and stone.  Baked at 470 degrees for 10 minutes with steam, then reduce oven to 430 degrees for another 50 minutes until internal temperature of 198 degrees.

Note: Bread rose nicely in refrigerator.  However I didn’t flour my peel properly resulting in some deflation in getting the bread off of the peel.  And I butchered the slashing.  The crumb developed nicely and you can see the red pepper flakes and seeds if looking closely.

The bread is very complex due to the herbs, rye, seeds and sour, and additionally has a nice kick given the red pepper!  Simple can be best, but in this case the herbs and seeds compliment it well. The sour element was pleasantly noticeable and not lost.  Deep rich rye flavor which would go well sliced thin with cream cheese on smoked salmon.  Or with your favorite omelet...