Yesterday I tried the ciabatta pizza that trailrunner posted about a week ago. I was very impressed with the results.

The pizza formula has a lot of yeast in it and went through bulk fermentation like a rocket (I had to put it in the fridge to slow it down.) When it had tripled (after about 3 hours in fridge--probably faster but I just let it sit there until I was ready), I heavily floured my counter, literally poured the glutenous dough onto the flour, and then sprinkled more flour on the top. I patted the blob into a circle about 1/2 an inch thick. Then the trick was how to get the blob onto the pan-sprayed parchment. I did the best I could but had to reshape it a bit after it landed. Didn't seem to hurt it any. I topped it with tomatoes and basil (topping basil was an obvious mistake at this point because it dried out in the oven--next time I'll put it on as a garnish; sometimes in the heat of the moment I do stupid things).

I baked it on a preheated stone on the bottom rack for 8 minutes. (Trailrunner had warned me that I needed to bake the moisture out of the tomatoes and that was good advice.) After taking it out of the oven with my peel, I removed the parchment paper, topped it with some of TJ's marinated rope-type mozzarella, and slid it back in the oven for another 8 minutes. It rose up real nice in the oven and produced a delicate, soft, thickish pizza crust. The pizza as a whole didn't have as much flavor as I was hoping for but my tomatoes weren't home grown (I used an heirloom supermarket variety), so I'm not surprised as the topping was so plain. Next time I think I'll reduce the yeast to 3 g (I used 7 g by mistake) so it will take longer to go through bulk fermentation and perhaps develop a little more flavor. But all and all I was pretty happy with the results. Thanks trailrunner for posting this great pizza!

Topped with tomatoes and ready to go into the oven. 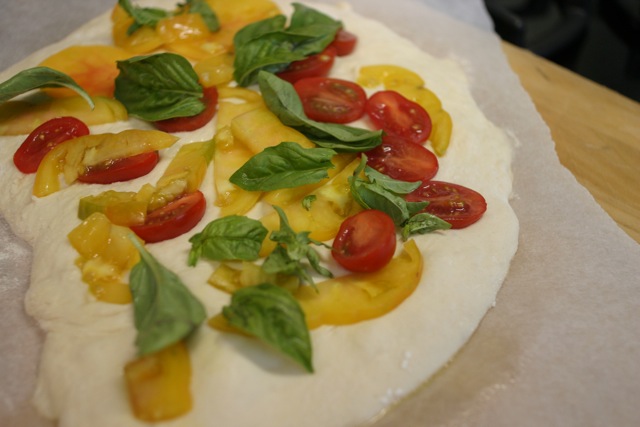 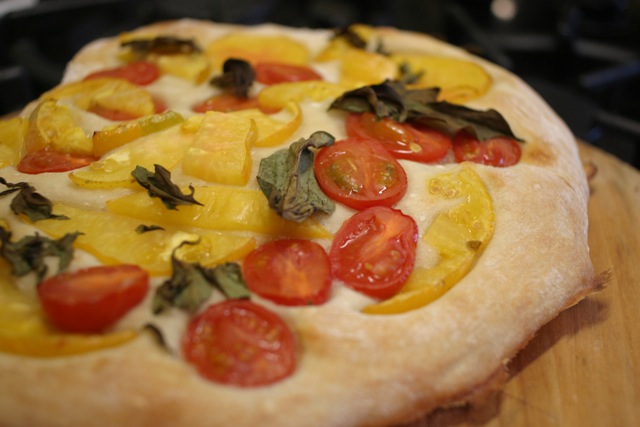 After 15 minutes (TJ's cheese had some oil in it so that's why it browned; regular mozzarella probably wouldn't brown.) 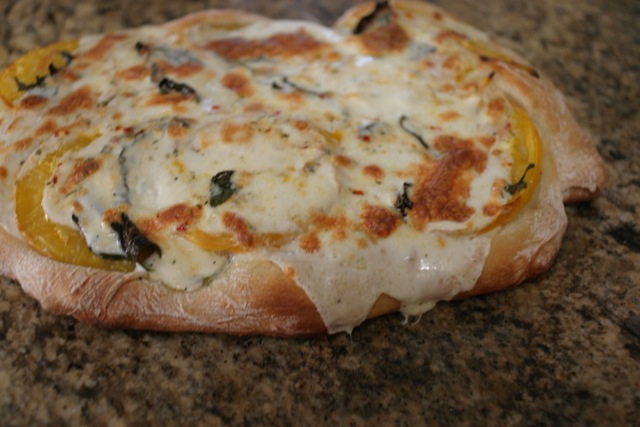 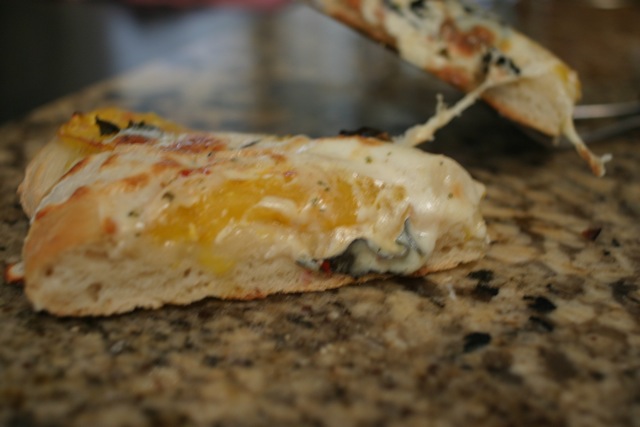 tomatoes, thinly sliced or halved cherries, or a combination of both

Put the flour, water, salt, and yeast in mixer bowl and mix with paddle to incorporate. Let dough rest for 5 minutes to hydrate. Knead with dough hook on speed 2 for 10 minutes. (My dough never formed a ball like trailrunner's so next time I'm going to use a little less water).

Put dough into a container and let triple.

Place dough onto a heavily floured countertop, sprinkle top of dough with flour, and pat into a round about 1/2 inch thick. Transfer dough to pan-sprayed parchment paper, top with thinly sliced tomatoes, and bake on a stone in a preheated 500º oven for 8 minutes to drive off the moisture from the tomatoes and set the dough. Remove pizza and parchment from oven, discard parchment and top with mozzarella cheese. Return pizza to oven and bake until done, about another 7 to 8 minutes.

Garnish with fresh basil leaves, and a light sprinkling of kosher salt and olive oil.

I also found another link to this pizza with pictures and discussion. NB: the reduced amount of IDY.

First pizza I have made for a long time, we don't like the pepperoni in slices so I put it through the Cuisinart , also made the crust in Cuisinart.

I made some pizza dough (starter, oil, flour, salt) and let it sit out overnight with the full intention of using it the next evening.  However, my family and I went out to celebrate that next evening, and the pizza was never made.  Due to an overfilled schedule, the dough was left out in rather warm temperatures.  By the time I got to it, the dough had a very alcohol-y smell to it, and there was NO gluten structure to it (basically, it was a batter). 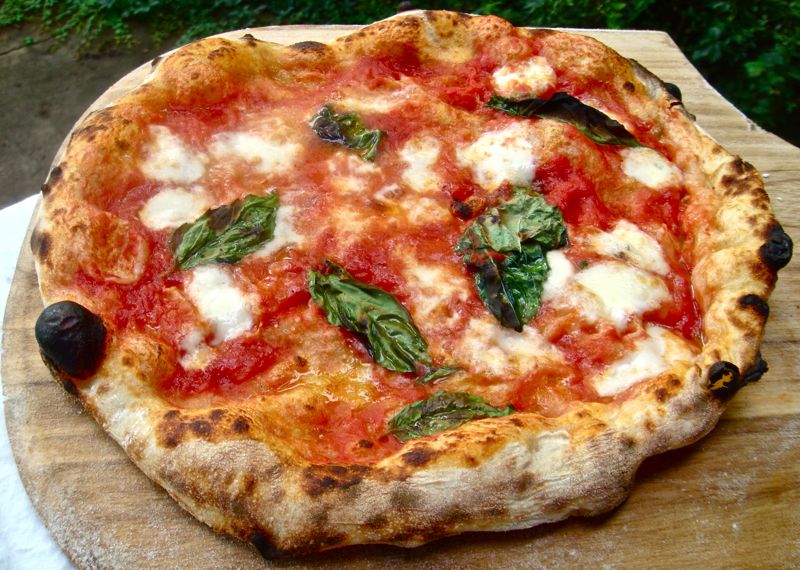 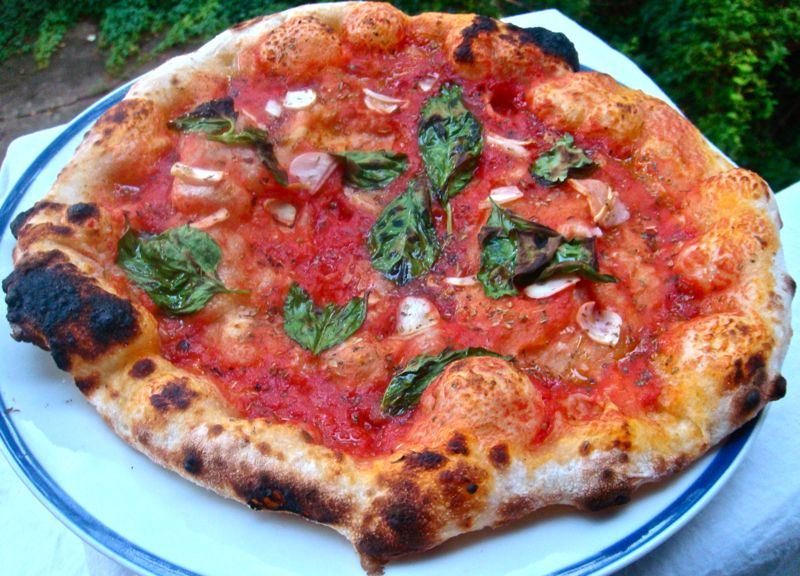 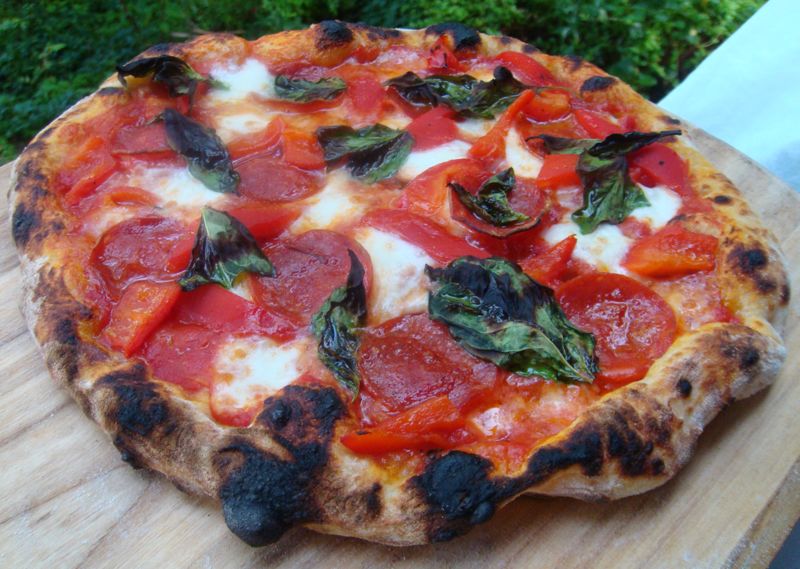 Recipe is on my wordpress blog for those who are interested. 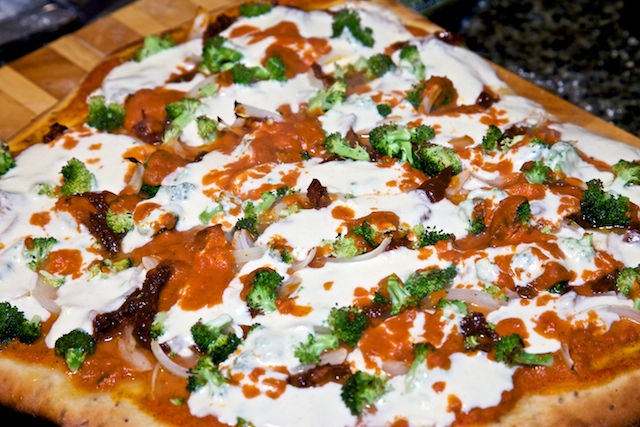 I've made the sourdough pizza cust at Mike Avery's site twice and it came out really nicely, however it came out a bit crispy, kinda like a cracker.  Is there anything I can do to make my crust thicker and fluffier?  Would it work to just use twice the dough? (his recipe makes two crusts-- I could just make one with it of a similar size)