This has pulled pork, habenero bbq sauce, hot pico, and a mix of cheddar and monterray jack cheese. It was crispy, delicious, and brutally hot. I think I'm going to make it again this weekend! I received some good response and thought I would post another link to another video.  This is on how to stretch a pizza, Franki G style.

I hope you enjoy.

I hope you enjoy

Three months ago, I made pizzas using Maggie Glezer's recipe for the dough. (See Pizza Napoletana) It made the best thin, crisp pizza I'd ever had. My blog on that pizza elicited many useful comments and suggestions. I incorporated some of them into the pizza I made this weekend. Thanks to Ross for the prompt to make sourdough pizza dough and to Sylvia for the mention of using a combination of bread flour and durum flour in the dough. I have taken Stan's noting the lower hydration of authentic naples-style pizza dough under advisement. I would note that, using bread flour rather than Italian Typo 00, my effective hydration is lower. (Higher protein flour absorbs more water than lower protein flours like Typo 00.)

Note: Since I calculated baker's percentages the “old fashioned way,” with the levain factored in as just another ingredient, the numbers are misleading. There is a total of 500 g of flour, really. Fifty grams of the flour is in the starter. The starter also contains 25 g of water, so the total water equals 330 g. Thus, the true hydration level of the dough is 66%. And, therefore, the durum flour and the pre-fermented flour are each 10% of the total flour.

So, a true representation of the Total Dough (ignoring the fact that the 50 g of flour in the starter consists of 35 g of AP, 10 g of WW and 5 g of rye flour), would be:

I made substantially the same pizza as last time – olive oil, slivered garlic, chopped rosemary, sliced tomato and parmesan cheese added half way through an 11 minute bake at 500ºF on a pizza stone. 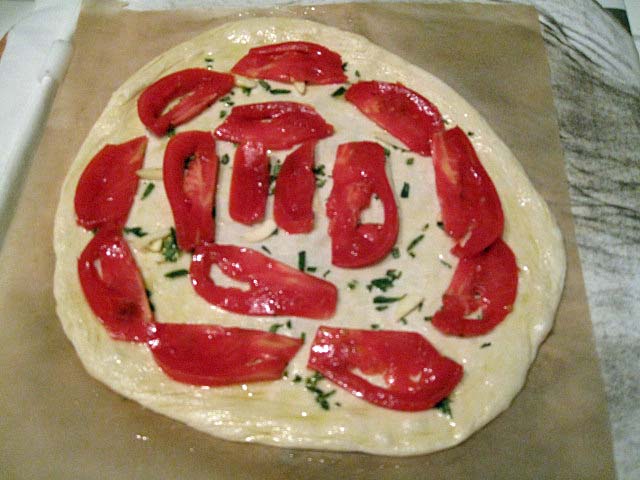 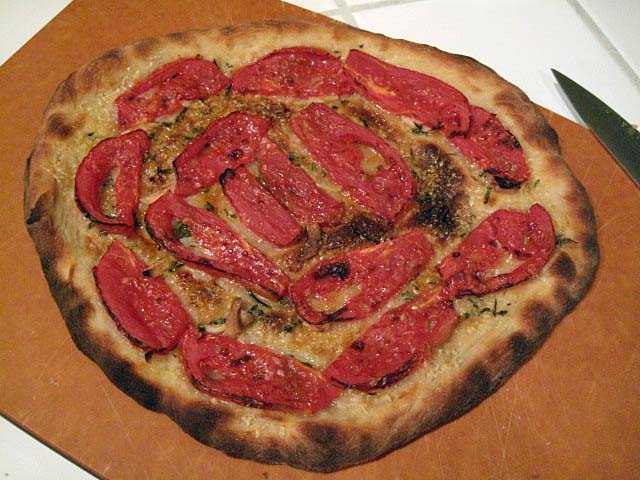 Ready to slice and eat

The dough stretched thin enough to see through without tearing. It baked crisp with more chewiness to the crust than the original version. The center was crisp and rigid enough to support the toppings. It was delicious.

Thanks to Ross, Sylvia, Stan and all the others who offerred suggestions the last time I made this pizza dough. 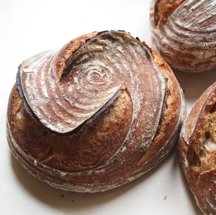 As many of you know, one of the high points of my week is baking with my Down syndrome daughter, Becky.  She's absolutely taken to baking like a fish to water and is my indispensable right hand gal.

So here's what we made.

Yesterday (8/20/11), we baked her sandwich loaves -- 30% buckwheat in an enriched sandwich bread matrix. We love the flavor of buckwheat and try to use it whenever we can in breads, pancakes, waffles, etc. 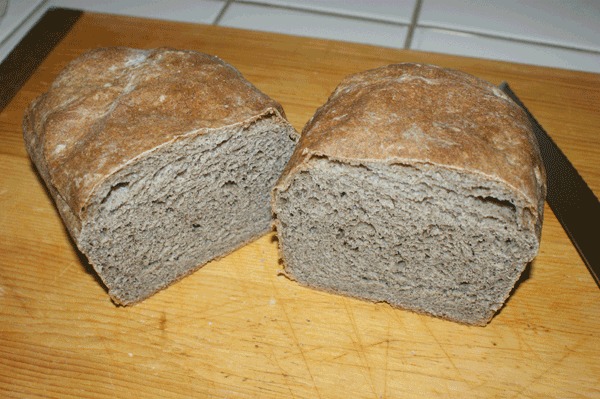 Well, I'm back from a lovely week at the beach with family. I surely enjoyed the week, including Glenn's fabulous pastrami and corn beef with his and my rye breads. Glenn's Tartine BCB and my SFBI miche were also appreciated.

Yesterday, I thawed dough made for pizzas 4 and 6 weeks ago and frozen. I made a couple of pies, one with each of the doughs made with Maggie Glezer's and Jeff Verasano's recipes. 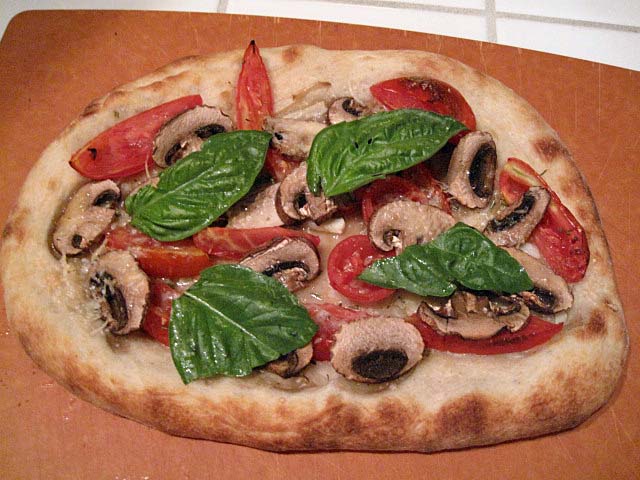 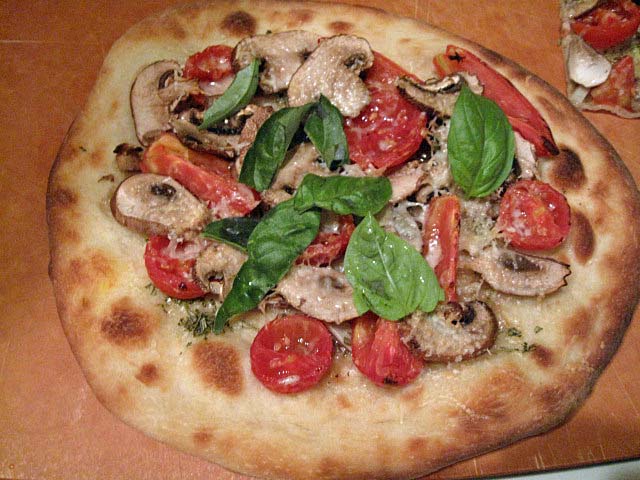 Pizza made with Jeff Verasano's dough

Glezer's pizza dough retained its distinctive crispness. Verasano's dough was still more elastic than Glezer's but not as chewy as it had been before freezing. I would say that neither was quite as good, but both were better than any you could get at the chains.

Today, I baked a couple bâtards of Pain au Levain from Hamelman's Bread. This has become a favorite. Today's tweak was to shape the loaves using the method portrayed on the KAF videos but proofing the loaves in cotton-lined oval brotformen rather than on a couche. 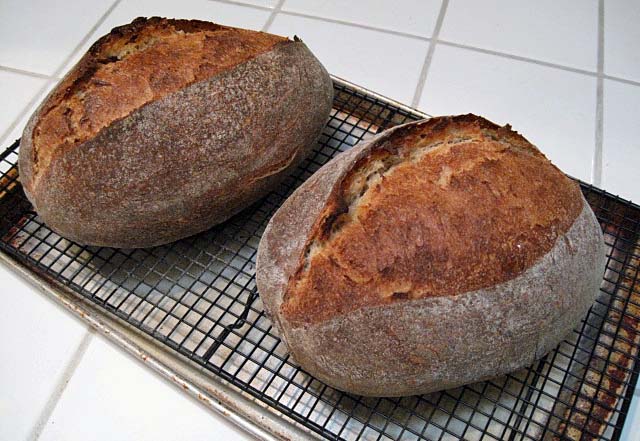 The loaves assumed a rounder/less elongated shape during baking. I wonder if, en couche, with lateral support but no support at the ends, the loaves spread longitudinally more. Hmmmm …. 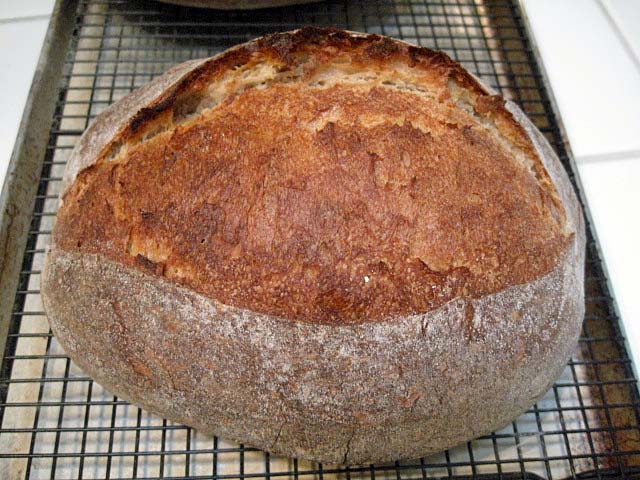 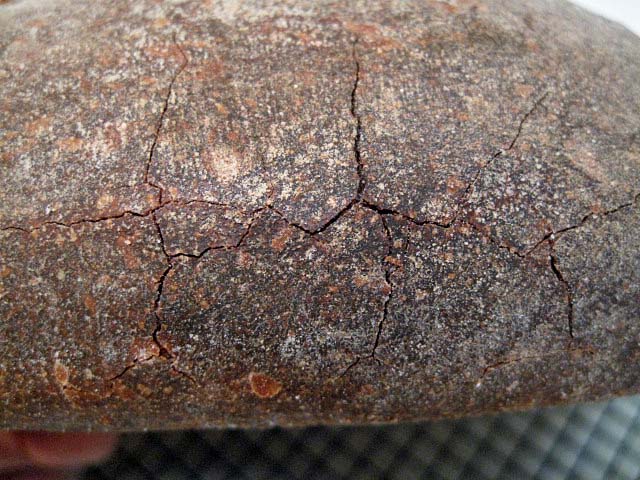 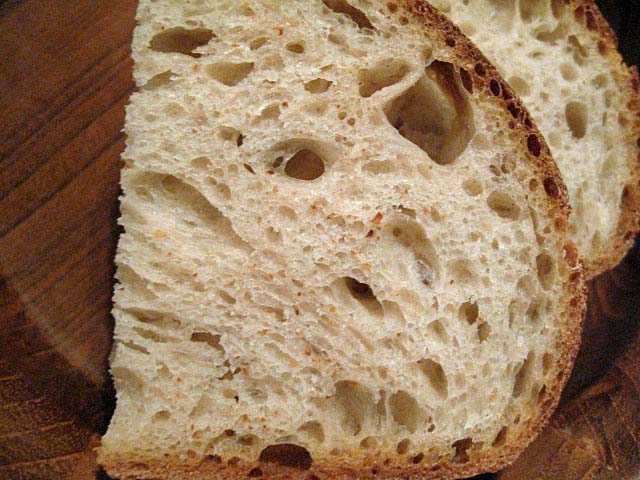 I have dough for my version of Gosselin's Baguettes Tradition in the fridge to finish tomorrow. I'll update this entry accordingly. 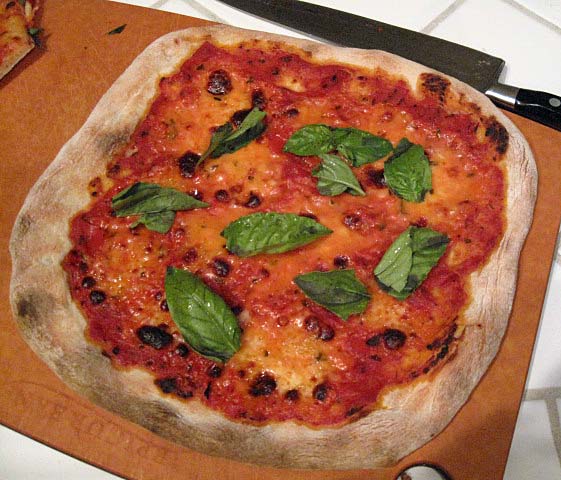 The pizza I made two weeks ago (Pizza Napoletana) elicited many helpful comments and suggestions. That pizza had a cracker-crisp crust and minimalist toppings. This week, I was shooting for a more robust, chewy crust that would stand up to tomato sauce and cheese. (Heavier toppings yet await a future pizza-making session.

Based on the advice of several more experienced pizza makers, I chose to make my dough using Jeff Verasano's well-known method. His long and passionate treatise on pizza-making at home can be found on his website. (Jeff Verasano Pizza) His formula for dough is as follows:

Jeff Verasano's Dough for one 13” pie

This formula is scalable. For two pies, double the ingredients, etc.

Because of a variety of considerations (including whims), the dough I made was modified from Verasano's as follows:

As you can see, I quadrupled the formula for one pie, but divided it into 5 pieces. I decreased the salt and increased the levain. The effect of doubling the levain percentage was to raise the actual overall hydration of the dough to 68%.

Verasano's instructions for mixing and fermentation are very specific about some steps but leave out some other information which would be helpful. Here is my method, annotated:

I made two Pizza Margheritas. I made the crust quite thin. The sauce was that in Floyd's A Pizza Primer. I used a very soft fresh mozzarella. Fresh basel was added after the pizzas were baked. 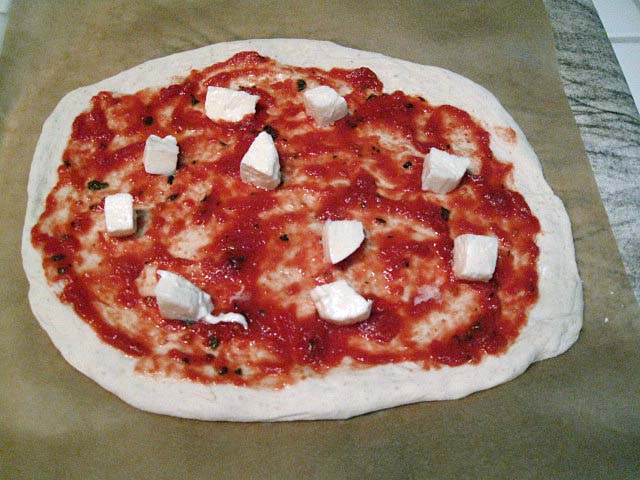 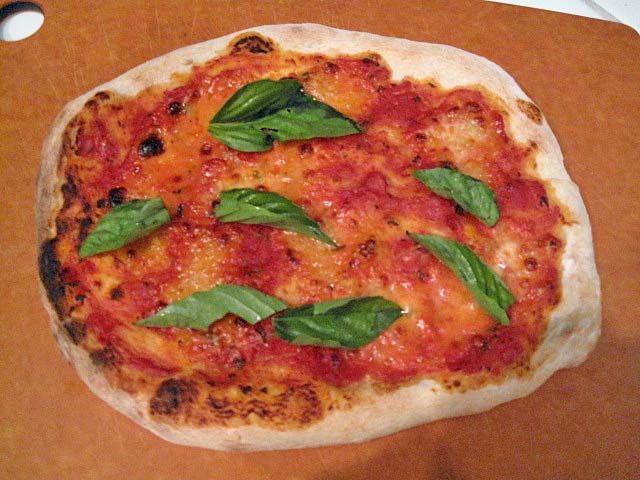 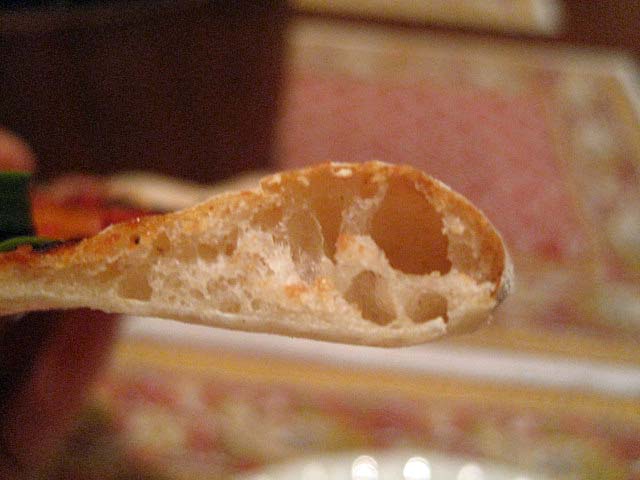 This crust stood up to the sauce and cheese rather well. It was not soggy at all. It was very chewy under the toppings, but the corona was crisp. The flavor was good, but I bet it would have been better if the dough had been cold retarded for a day or two. That said, I covertly watched my wife eat her pizza slices. The truest test of pizza crust is whether she eats the rim. She generally doesn't eat the crust when we have pizza out. Tonight, she left not a crumb. I guess it was pretty good.

Personally, I'd like to split the difference between this crust and the one of two weeks ago. Maybe I'll try adding a little oil to soften this dough or use a lower gluten flour. I'm less tempted to try a much lower hydration dough, because I like the extensibility of this dough so much.

Thanks to all of you who contributed to my previous pizza blog. The quest continues!

Pizza and Focaccia are both subjects near and dear to me. I have seen so very many arguments arise from the subject of how to discern one from the other, and I don't like to see my fellow TFLers consumed by the fires of wrath. We are a community, after all, and a community we shall remain forever after. If you would all be so kind as to follow along with me on this journey...

I would like to be able to claim some fair amount of impartiality in this decision, and so if you will allow me, I will open with my qualifications.