I posted this on another thread earlier but not sure if anyone would see my question there.  I'm also trying out this recipe

Okay all you pizza afficianados....I stole this from Pinterest today and have to tell you I am so tempeted to try it out...BUT...a  pizza dough with no rise time????  What do you think...dare I attempt this super easy and fast recipe?  Would love your thoughts...

cornmeal
Preheat oven to 400F.  In a large bowl, combine the yeast and warm water and stir until the yeast dissolves.  Add the flour, salt, honey and olive oil; stir to combine using first a wooden spoon then your hands.  Let dough rest for 10 minutes.
Sprinkle baking sheet with cornmeal and press dough into it to your desired thickness.  Top with your toppings and bake for approximately half an hour or until crust is golden, toppings are heated through and cheese is bubbly.

It’s been a lovely start to the spring season, the weather has been unseasonably warm, so it was about time I fired the wood fired oven up for a quick couple of pizzas for my family.

It’s always difficult after you haven’t fired an oven in anger for a while as it builds up moisture over the winter and everything takes a while longer to heat up.

I thought I would share a few pics from last night's pizza dinner. I used Nancy Silverton's pizza dough recipe from her Mozza book. I made a few adjustments with fermentation times, but for the most part, it's the same.

I've had the pizza at Mozza and I think it's one of the best (if not, the best) pizza in Los Angeles. This recipe is not supposed to be an exact duplicate of the pizza dough at Mozza, but rather, a home baker's version. I think it came out pretty darn good, if I do say so myslef!

To make the sponge, put 15 ounces of the water and the yeast in the bowl of a standing mixer and let it sit for a few minutes to dissolve the yeast. Add 13 ounces of the bread flour, the rye flour, and the wheat germ. Stir with a wooden spoon to combine the ingredients. Wrap the bowl tightly in plastic wrap and tightly wrap the perimeter of the bowl with kitchen twine or another piece of plastic wrap to further seal the bowl. Set the dough aside at room temperature (ideally 68 to 70 degrees) for 1 1⁄2 hours.

Uncover the bowl and add the remaining 7 ounces of water, the remaining 13 ounces of bread flour, and the barley malt. Fit the mixer with a dough hook, place the bowl on the mixer stand, and mix the dough on low speed for 2 minutes. Add the salt and mix on medium speed for 6 to 8 minutes, until the dough starts to pull away from the sides of the bowl. Note that the dough will not pull so much that it completely cleans the bowl, but if the dough is too sticky and is not pulling away from the sides at all, throw a small handful of flour into the bowl to make it less sticky. While the dough is mixing, lightly grease with olive oil a bowl large enough to hold the dough when it doubles in size. Turn the dough out of the mixer into the oiled bowl. Wrap the bowl as before. Set the dough aside at room temperature for 45 minutes. Dust your work surface lightly with flour and turn the dough out onto the floured surface. Acting as if the round has four sides, fold the edges of the dough toward the center. Turn the dough over and return it, folded side down, to the bowl. Cover the bowl again with plastic wrap and set it aside for 45 minutes.

Dust your work surface again lightly with flour and turn the dough out onto the floured surface. Divide the dough into six equal segments, each weighing approximately 7 ounces. Gently tuck the edges of each round of dough under itself. Cover the dough rounds with a clean dishtowel and let them rest for 5 minutes.

Lightly flour your hands and use both hands to gather each round of dough into a taut ball. Dust a baking sheet generously with flour and place the dough rounds on the baking sheet. Cover the baking sheet with the dishtowel and set them again at room temperature for 1 hour to proof the dough. (Or leave the dough on the counter to proof instead.)

This past weekend, I finally got around to doing a head-to-head comparison between the two Type 00 Italian flours NYbakers.com sells, and it was a real eye-opener.

First some background.  Until recently, we weren't able to get the Caputo flour since our wholesaler was having problems with his source, so originally, although I wanted to stock the Caputo, all I could get was the Pivetti -- and, frankly, I'm not at all sorry things worked out that way.

Crushed san marzano tomatoes, fresh mozz, spinach, prosciutto, and a egg pizza.  High gluten dough, I like the chew.  Fermented in the fridge for about 10 hours, a few stretch and folds in there, and then proofed for 45 minutes rougly. Combination cooking of cast iron griddle and broiler - total cook time around 4 minutes.  By 'creative', I mean not pepperoni and cheese or such. 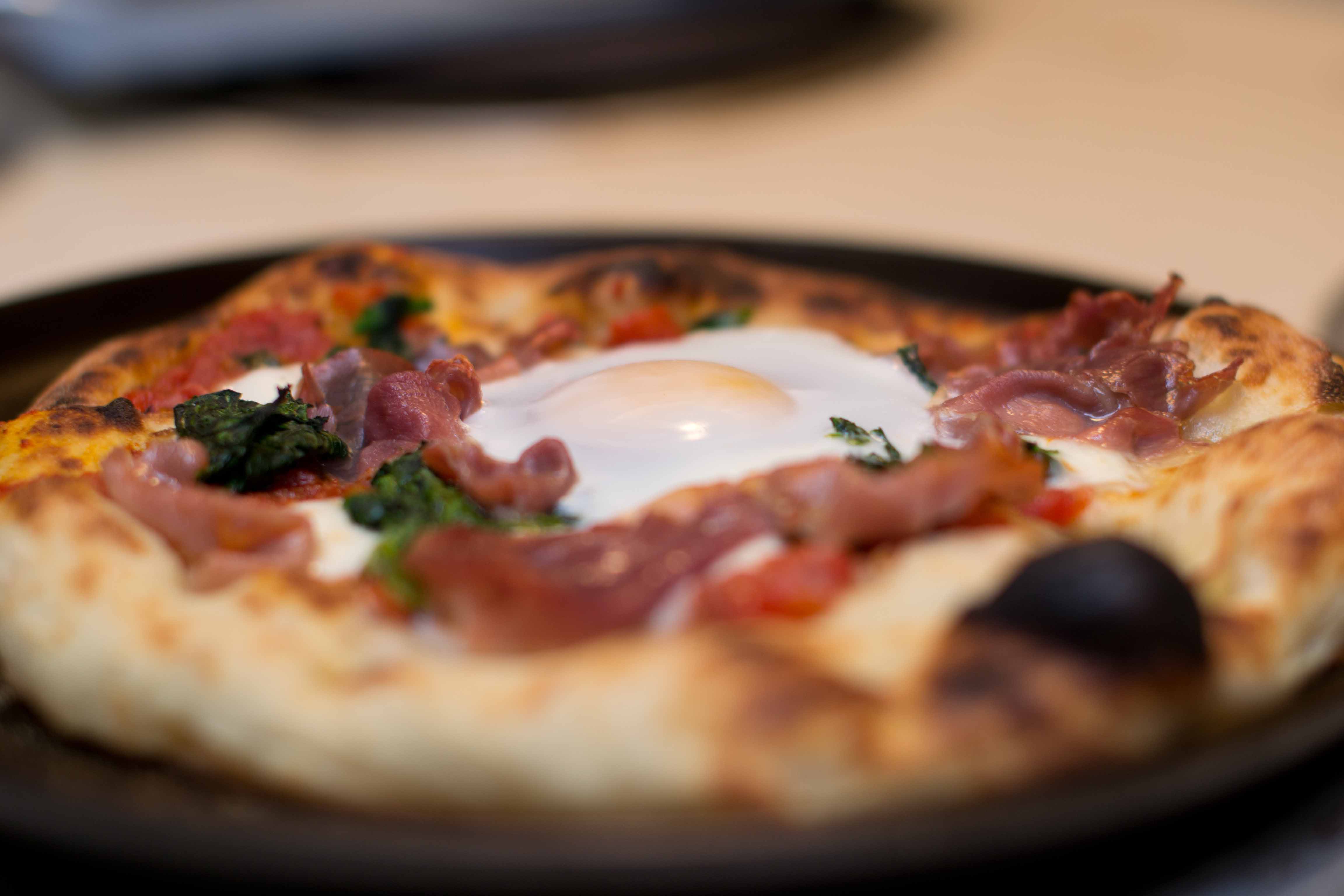 Sorry for the thin DoF on the pics, didn't check my aperture first.

i made some pizza dough the other day that needs to ferment for 3-5 days in the fridge.  i just tapped into a new bag of bulk yeast and because my last container was always fool proof i neglected to proof the yeast. well, it's a bad batch so my dough never developed. i now have two lumps of everything for pizza dough except yeast. any ideas what can be done to put this to some other use, other than letting my cousin hit me with it since it was supposed to be for her birthday tonight?  thanks, mike 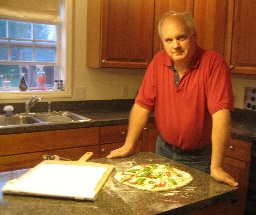 Just wanted to let the group know that we just launched a giveaway contest.  We are giving away two Super Peels to celebrate Pie  (pi) Day.

All that is needed to enter is to  post a picture of your best (or worst) Pizza Wreck to the Super Peel Facebook Fan Page by March 12, and we will select the winners on March 14th, which is coincident with the Pizza Expo in Las Vegas!  This is just for fun and we are hoping to see a lot of pizza carnage!

It's been a while since I made my own pizza so I figured it was time to make a go of it again.  I have been reading many posts about using 00 style flour and how it really only works best when you can get your heat source over 700 degrees.  I don't have the ability to do that just yet, so I decided to combine 50% Italian Style Flour from KAF and 50% KAF Bread Flour and see what happens.

I adapted a recipe from Peter Reinhart's Artisan Baking Everyday and after a couple of days with the dough balls resting comfortably in my refrigerator I decided to bake a couple of pizzas for lunch this past weekend.

I recently read another blog by  Steve B. at http://www.breadcetera.com where he suggested to put your pizza stone on the highest shelf of your oven and set your oven to broil.  The purpose of this is to get as much heat as possible to be retained by the stone.  I have to say it worked perfectly so give it a try!

I decided to add some pepperoni and some parmesan cheese to add some extra flavor and I do have to say I was very happy with the end results.  My wife did complain that one of the pies was a little soggy which was due to my putting too much sauce on the pie, but I ate it all anyway!

Combine all the ingredients in your mixing bowl and mix on the lowest speed possible for 1 minute.  The dough should be rough and a little sticky.  Let it rest for 5 minutes so the flour gets fully hydrated.

Knead the dough on medium low-speed (or by hand) for 2 to 3 minutes until the dough is smoother.  Next put some olive oil on your work surface and your hands and transfer the dough to your work area.  Do a stretch and fold and form the dough into a ball.  Divide the dough into 5 pieces weighing about 8 ounces each and form into balls.  Spray the inside of a mini plastic storage bag with oil and seal each dough ball in the bags.  Put them in your refrigerator overnight or up to 4 days.  You can freeze them also for several months if desired.

One hour before you are ready to bake pre-heat your oven to the highest temperature and put your pizza stone on the highest shelf possible in your oven.

Prepare your favorite sauce and get your cheese and toppings ready.  I used a simple fresh tomato sauce consisting of 1 can of diced tomatoes with red peppers, salt, freshly ground pepper, oregano, basil, 1/2 of a lemon and a dash of red wine vinegar.  I also used fresh mozzarella, grated parmesan and pepperoni.

Put some bench flour in a bowl and dip each dough ball in the flour as well as your hands.  Flatten the ball of dough on the work surface with your hands first and if desired either use a rolling-pin or pick the dough ball up and using both hands start stretching it out using your thumbs and the back of your knuckles.   Your thumbs should actually be doing all the stretching and not your knuckles.  you want dough to be fairly thin, but not too thin or it will end up ripping.

Turn your oven on broil 10 minutes before you are ready to bake your pizza and get the stone as hot as possible.  Assemble your pie and brush some olive oil on the crust if desired.  You can either sprinkle corn meal or flour on your bakers peel and place the pizza on your peel before putting the topping on it. Alternatively you can put your pizza dough on a piece of parchment paper and slide the peel underneath when ready to put in the oven.  The worse thing that can happen is for your dough to get stuck on your peel and make a mess in your oven, not to mention ruin all your good efforts.

Make sure you turn the oven off broil before you put the pie inside and turn it back to your highest setting.  Let the pizza cook until the crust is blistering and the bottom is nice and brown.

I strongly advise not to put too much sauce on this style of dough or you will end up with a soggy mess.  Less is actually more in most cases of making a good pizza.

This dough is also excellent for making calzones which I did a few days later.  I added some grilled chicken, mozzarella, ricotta cheese mixed with basil, oregano and garlic salt and parmesan cheese inside and baked at 400 degrees for around 25 minutes.  Just make sure you use a little water to seal the dough and cut some air slits on the top so the dough doesn't built up too much pressure. I hope you give this recipe a try yourselves.  It is actually fun to make and relatively easy.

This post has been submitted to the Yeast Spotting Site here: http://www.wildyeastblog.com/category/yeastspotting

You can see some of my other posts at my other blog at www.mookielovesbread.wordpress.com