Don’t like to blow my own trumpet but this far exceeded my expectations.

I have never warmed to the idea of cornbread, even though I like corn.

This is really tasty, you could eat it alone with a nice salad.

I slightly rewarmed it today and had it as my lunch with a salsa type salad….Scrummy:)

When I was making chili the day before,  I thought “Why not cornbread, to mop up all the gravy ?”

Cornbread, which is of course the traditional accompaniment to chili.

It really did just hit the spot.

The original recipe had Chili in it as well but I left that out because my chili was quite HOT and I thought it would be chili overload………strangely enough:)

I would give it a go with the chili in the recipe when accompanying a dish that perhaps wasn’t spicy and maybe needed a bit of juzzz to it.

Maybe with a nice hearty stew or casserole?

Gorgeous with Chili or alone

So what will you need?

1 can of corn kernels or 2 cobs of fresh corn.

Add the corn in

Chop up the onion and fry it gently in a fry pan with the Olive oil until golden and caramelly then add in the corn and fry for a further 5-10 minutes .

While the corn and onion is cooking, break eggs into a bowl and whisk.

Mix well and place to the side.

Remove corn and onions from element and leave to cool.

Grease a heavy skillet pan if you have one, if not,  a cake tin is fine.

I used a 20 inch cake tin but make sure it is well-greased.

I wouldn’t line the tin as it will then take away the possibility of it having a crunchy bottom as well.

Pour corn mix into the batter..

Pour batter into the prepared skillet/ tin and place in the oven.

After 15 minutes, open the oven and sprinkle the cheese on the top.

Cook for 35 minutes in total until golden brown.

Remove from oven and allow to cool a little in the pan.

When cool enough to touch, remove from skillet/tin and cut into pieces and serve warm if possible.

Place in the oven

Now the beauty with this recipe is that you can alter it and add to it.

I think it would be nice with capsicum in it as well and you could even make it a meal on its own with maybe spicy salami in it?

Up to you but great as versatile.

Saturday was pickup day for Pioneer Valley's grain CSA. I am really impressed with the variety and quality of the grains and beans we got. I'll do a more extensive post on what we got later, but here's the first cooking effort. I used the same recipe from my blue corn cornbread entry, using Red Llamas Wheat and Mandan Bride Corn.

The Bride Corn kernels were so big that my mill had a hard time 'grabbing' them and pulling them into the stone. I ended up having to mill it twice -- the first time with the outer wheel very loose to get a coarse, rough grind, and then a second pass at a finer setting. It was a pain in the butt, but it worked.

The flavor of the final product was superb, I paired the bread with a berebere-rubbed pot roast with yams and carrots. This is a moist, sweet cornbread similar to those made from Louisiana to North Carolina. You'll find it served with just about everything, like Chicken & Butter Beans or Red Beans & Rice.

To make a classic Cajun breakfast cereal known as 'couche-couche' (pronounced 'coosh-coosh'), crumble some in a bowl and pour warm milk (or café au lait) over it. I prefer to heat the cornbread and then pour ice-cold milk over it, but that's just me.

If you like your cornbread dry and savory, like those made in Texas and the American Southwest, this is not it. Image 1. Not my photograph, but result looks just like this. Source. Elly Says Opa.

I don't remember where I found this recipe, but I've tweaked it so much over the years that it might as well be my own. I think it was called Charlie's Cornbread, so that's what I'll call it. Charlie, if you're out there, thank you for the original recipe. 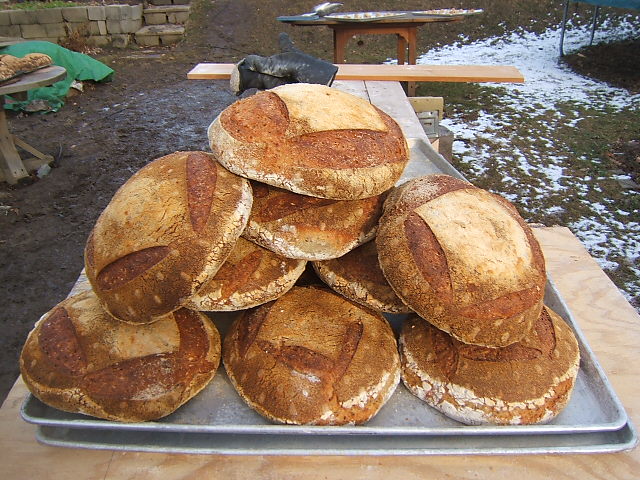 I think this quick and easy cornbread is a fantastic recipe (thank you Smitten Kitchen), with an incredible amount of flavor.

The savory caramelized onion bounce off the sweetness of the cornbread, and the addition of the goat's cheese adds that subtle twang.

I made this the other weekend to bring to my sister-in-law's home for Sunday night dinner -- huge hit.

Thank you Chef Reinhart to a wonderful addition to the Cornbread world!

I think this version would be wonderful for stuffing!

The night before preparation

1 cup of corn polenta grits Put both of these ingredients in a bowl and cover with plastic wrap and set aside at room temp.

The next day add dry ingredients into large bowl as follows:

1 3/4 cup of unbleached all purpose flour

Add to the buttermilk mixture

Note:   He uses 10 slices of bacon crumbled in the recipe. 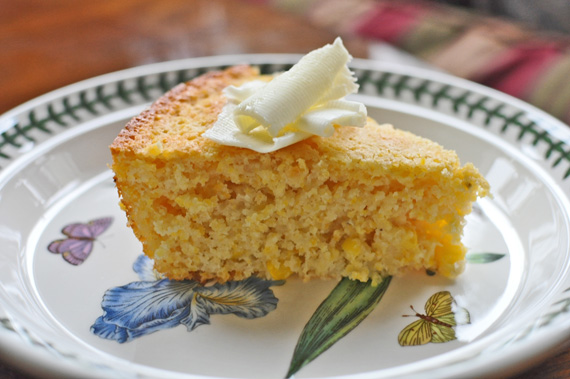 Mix wet and dry together and pour into baking dish, I used an old cast iron skillet. Bake for 30 to 45 minutes at 350.  Time will vary depending on pan and oven.

I broke out the metal 'stones' for my Retsel and made cornbread tonight. The corn was organic blue corn from Heartland Mill. The wheat flour in the recipe was a mixture of hard red and hard white wheat from Pleasant Hill. These, plus some butter and jam, were all we needed for dinner tonight. the best damn cornbread ever!

OK so it's not sourdough, it's not even yeasted. But and this is a big but, i swear it is the best damn cornbread EVER!

In fact, I have just vowed to myself that I can only make this for a special treat because over the course of just today I have lost all reason and have eaten more of this cornbread than i care to admit!

It is the perfect sweetness; I went just a little lighter on the sugar than the recipe called for due to the fact that the actual corn I used was off of cobs that I had frozen fresh from last summer, and I knew how sweet it was. There is a healthy amount of buttermilk in the recipe, and the clincher I think is the generous amount of uncooked polenta (out of the 3 cups of polenta it called for I substituted 1/2 of it with stoneground cornmeal just because I didn't have enough polenta). The uncooked polenta gave each bite a perfect little crunch inside the buttery moistness.

As you can see, the top developed a nice crispy crunch, it is I must say Cornbread Perfection.

For those of you who dare to indulge here is my exact version - ever so slightly altered from Peter's recipe:

Mix all dry ingredients together including corn kernels (used fingers). Wisk eggs, then wisk in Buttermilk and butter. Pour wet ingredients into dry and then mix together (I used my hand again) only until all of the flour is hydrated but no more. Pour into a greased pan. I used one that is rectangular, probably an 8X14 or around there. Bake at 350 for about 40 minutes or until a toothpick comes out fairly clean from the middle. And it rises! It is big and thick and makes a lot.

So, if you like cornbread, your in for a treat. Make this if you dare, but be prepared!

It is really perfect the way it is, but I am wonderng if a few chopped up hot chile peppers might make it even more sinful! 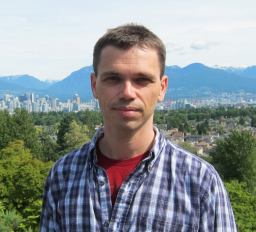 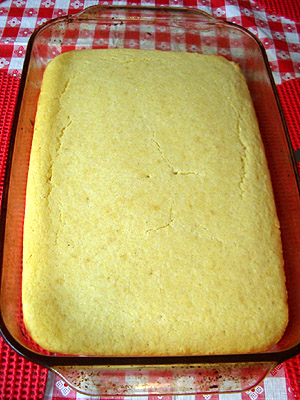