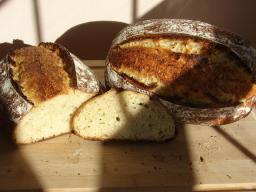 Here is a pic of my first attempt at scoring a nature scene into a loaf. My inspiration was Bob Ross. He inspired me when I was young to paint and spent many days in the garage doing my best to paint like him. One thing that he said in a show that stayed with me was as he stood there pointing to his head he said "first you have to beleive in here". I beleive I can make great bread and I beleive I can make an awesome nature scene on it to eat with your eyes before eating with your mouth. And for everyone here I beleive you can all make "happy little loafs". Thanks Bob.

This is a short video demonstrating and naming different scoring patterns. 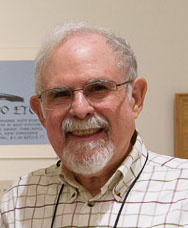 "Bec de Canard" (Literally, "duck's bill.) is the name given to a sharply curved and hooked French lame. I've ogled these on French baking supply web sites and wondered how they would compare with a razor blade type lame for scoring breads. I recently found them from a U.S. source by following a link from another site. The price was quite modest, so I indulged my curiosity. If anyone else is interested, my source is Bridge Kitchenware (lames).

I had a really great success in scoring the sourdough batards I made over the weekend, and wanted to share.  They were made using the "experimental" sourdough baguette formula I concocted awhile back, although I screwed up in several places -- added salt to the liquid levain, and far too much water to the firm levain/pate fermente.  I managed, though, adding more flour and omitting the salt from the firm levain.  The dough was I think a little wetter than the 65% I intended, but everything worked out nicely nonetheless.  The results were quite pretty, though the lighting in the picture doesn't do it justice:

I think the higher quality results were more to do with improved shaping than improved scoring per se.  Since I switched over from the Hamelman-recommended "fold over the thumb" approach to the Back Home Bakery "roll and tuck" approach, I've been getting much better results from my batards and baguettes.

Taste, texture and crumb were also quite nice:

Barbara Kraus asked a question about how to get a razor blade installed on the lame handle from TMB (SFBI). I thought some photos would be most informative. 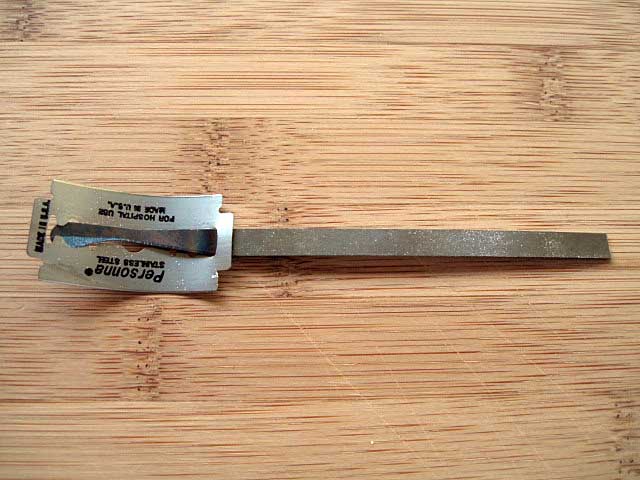 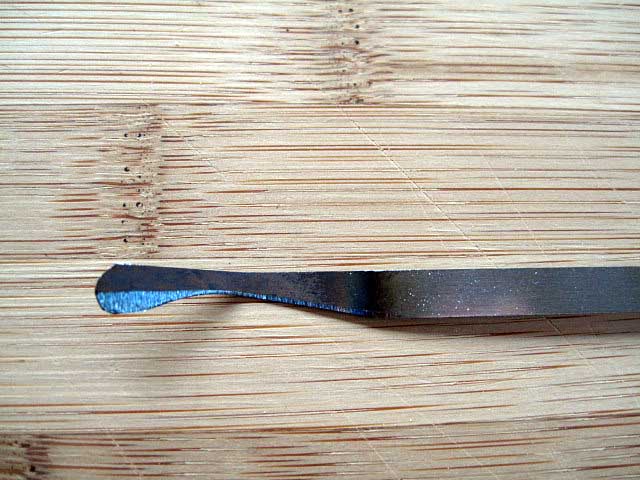 Tip of handle on which the razor blade gets installed

I appreciate the need for scoring and have always scored my bread. My problem with scoring is that at the point of baking my scoring tool (serrated knife and especially a razor) is usually hung up by the proofed dough and unable to make that neat quick cut. Any suggestions?

Inspired by dmsnyder's excellent scoring tutorial post, I decided to try the C&C San Fran and see what I could do following his pointers. I didn't want to pollute his post with my amateur pics.

I did 2 loaves that both look like they went in underproofed. Using a double-edged razor blade on Starbuck's stir-stick, I put 3 shorter slashes on one loaf and 2 longer ones on the other. I held the blade at less than a 30° angle and slashed quickly. I have not made this dough before, but it was a lower hydration than I usually create and seemed much easier to score.