Bagels - or thank you Jeffrey Hamelman

Sometimes baking bread seems to be about the challenge and developing the skills and trying new things and so forth.   And sometimes it is all about making what you want to eat.   When I started bread-making in earnest in January, I suddenly lost my taste for the supermarket bagels I'd been eating happily for several years.   Since there is no good bagel place in my immediate area, I simply stopped eating bagels.  But then many of you just kept posting and posting and posting your various bagel bakes, and I couldn't stand it anymore.   So I decided to try Hamelman's approach, and I was pleasantly surprised to find that not only was it relatively simple, but geez, it tastes like the bagels that I used to eat way back in the day, when a New York baker moved to St. Louis, got in a taxi cab and told the driver to take him to the Jewish section of town.   This was back in the sixties, and such a thing had not been seen in St. Louis before.   My father used to come home with dozens and dozens of bagels, and somehow we managed to eat them all.   Usually when I make something, it doesn't come out just how I like it, and I fiddle and fiddle or switch approaches a half dozen or so times, and possibly make something better over time, and possibly not.   But unless someone has a compelling argument that their bagel formula is better than Hamelman's I'm just going to stick with it, and focus on learning how to shape better.   Thanks for all the inspiration to you bagel bakers out there.   Now I have what I want to eat.   -Varda 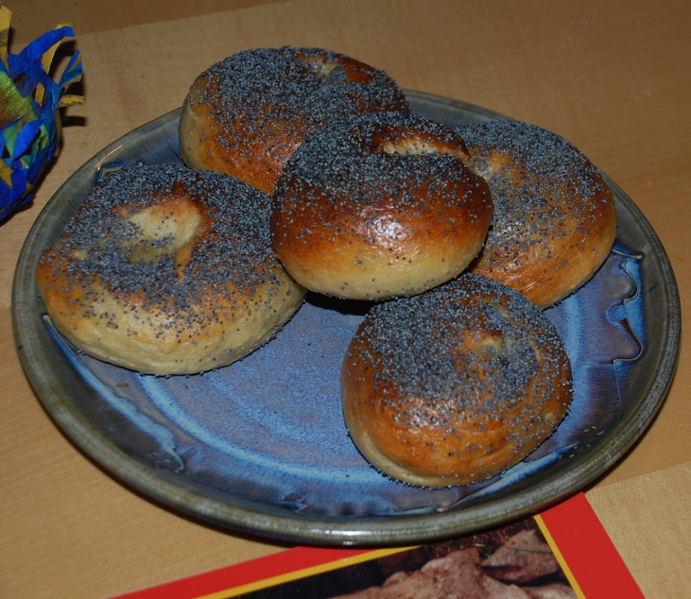 And all ready for creamcheese. 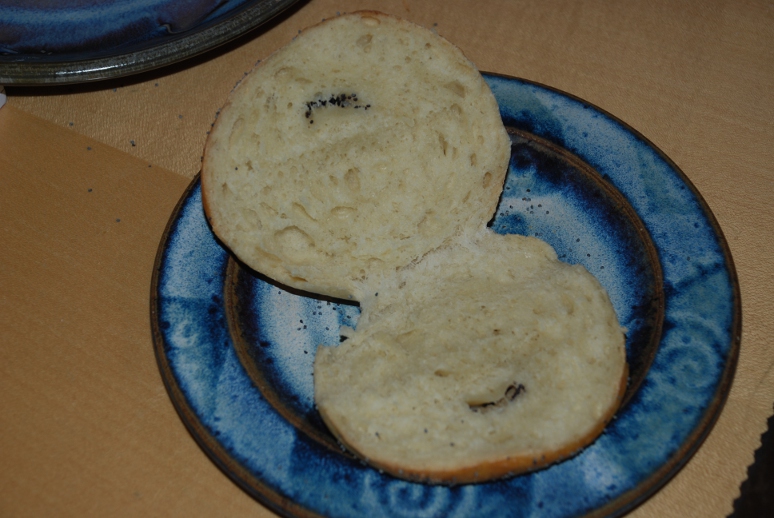 "A bagel is a round bread made of simple, elegant ingredients: high-gluten flour, salt, water, yeast and malt. Its dough is boiled, then baked, and the result should be a rich caramel color; it should not be pale and blond. A bagel should weigh four ounces or less and should make a slight cracking sound when you bite into it instead of a whoosh. A bagel should be eaten warm and, ideally, should be no more than four or five hours old when consumed. All else is not a bagel."

So wrote Ed Levine in The New York Times.  Having tasted (and baked) various bagels,  the elegant simplicity of Jeffrey Hamelman's formula, both in ingredients and technique, perfectly fits Levine's description.

Prep time is about ten minutes to scale the ingredients and complete the calculations for the desired dough temperature (76F).   Figure another couple minutes to very lightly oil two sheets of parchment (wiping off any excess oil), which are then placed on two baking sheets.  This is your insurance policy to make sure your bagels won't stick to the parchment after the retarding period.  BTW, these two sheets can be used over and over again.  Just let them dry out before storing them and lightly re-oil before using again.

The dough is then mixed for three minutes to incorporate the five ingredients, then five to six more minutes in a stand or planetary mixer.

Now, about mixers.   Over the past year I've been using my KA Artisan mixer to mix this 58- percent hydration dough.   It easily handled the first three minutes of mixing at speed one,  but began to heat up during the second mixing stage at speed two.  I resorted to strapping an ice pack on top of the mixer to keep it cool and even shut it down for a few minutes if I thought the mixer was straining too much.  That worked and my KA Artisan has survived mixing 30 pounds of Sir Lancelot high gluten flour for bagels, but I've paid very close attention to it every minute of the mix.

Not wanting to push my luck any further because my KA grain mill and food grinder attachments are important tools, last month I found a Bosch compact stand mixer for sale.   After mixing two batches of bagels, I remain amazed that the little Bosch (which I can hold in one hand) doesn't even get warm while mixing this very stiff dough.

Once the dough is mixed, it is bulk fermented for one hour, then divided into 13 (a baker's dozen) four-ounce pieces (roughly 112 grams).  Each piece is rolled into a log shape with blunt ends to a length of 10 to 11 inches.  Since a picture is worth a thousand words, and a video worth a million or more, here's a link to a great video by Ciril Hitz demonstrating the same shaping method described in Hamelman's Bread.

It takes about a minute to divide, weigh, and shape each bagel.  Divide the 13 bagels between your two lightly oiled parchment sheets, bag the pans or cover with plastic wrap, and refrigerate at least six hours or overnight.  I prefer at least 12 hours.  Retarding is important because it slows down the fermentation of the dough and encourages lactic acid to develop, as well as that lovely crust.  The bagels remain in the refrigerator until you are ready to boil and bake them.

The next morning preheat your oven (and stone) to 500F and add three to four inches of water to a large pot, which will be brought to a boil.   While waiting for the oven to preheat, assemble a large bowl to contain ice water, a plate and cake rack to hold the bagels after their ice bath, a spider or slotted spoon, and another plate to catch any droplets of malted water as you move the bagels from the boiling water to the ice bath. You'll also need a couple sheets of parchment and your peel.

Add enough barley malt syrup to the water (before it begins to boil) so that it's the color of dark tea.  Once the water is at a rolling boil, dump a tray of ice cubes into the large bowl and add water.  Remove one tray of bagels from the refrigerator, uncover, and place two or three in the boiling water for around 45 seconds.   They'll pop right up and float.  The syrup adds a touch of sweetness and color; boiling begins to gelatinize the starch and creates the glossy crust, but boiling too long (some authorities say a minute is too long; others say two minutes) can cause the dough to collapse or  develop patches of yellowed, thickened crust.

Remove the bagels from the boling water and immediately place in the ice water bath to chill for a couple of minutes.

I don't use bagel boards, so I move the chilled bagels to the cake rack for about a minute, then to the parchment on my peel (after adding toppings, if any).   Once all the bagels from that batch have been boiled, chilled, and moved to the parchment covered peel, into the oven they go for 15 to 18 minutes.  Proceed with the final batch and enjoy while still warm.


The results: authentic, elegant bagels that even Ed Levine would love.

This recipe is my first bake of The Bread Challenge

I'd bought some smoked salmon to have with Greenstein's sour rye which I baked last week. My wife's comment was, "It's too bad we don't have bagels." It happens I had a couple bags of Sir Lancelot (KAF's high-gluten flour) in the pantry, as well as all the other necessary ingredients, on hand. I also had a lecture to prepare, and I was running out of excuses to delay finishing it. So, I made bagels. 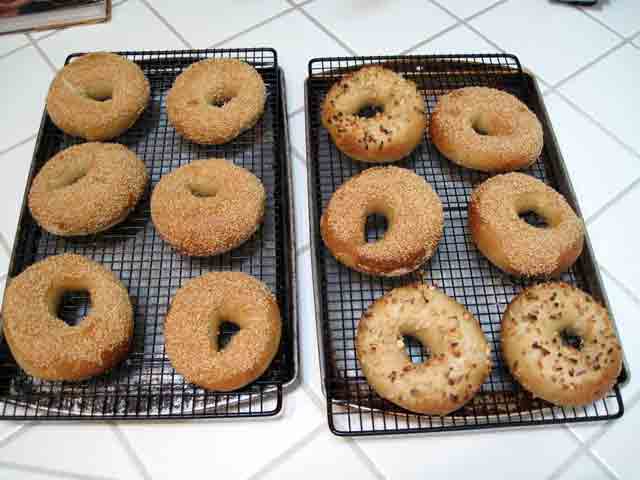 I used the formula from Peter Reinhart's "The Bread Baker's Apprentice." This entailed making a sponge, then a final dough which is mixed and immediately divided, then shaped and retarded overnight before boiling, topping and baking. I'd used this formula before, but never with high-gluten flour.

The dough was a pleasure to work with, and my shaping method "clicked" with this batch. I shaped each piece as I would to make challah, using Glazer's method of flattening the pieces then rolling them up into tubes. I then rolled each tube as if I were making baguettes to about 9 inches, shaped them over my hand with the ends together in my palm. I gave the ends a gentle squeeze and then rolled the sealed ends on an un-floured board to seal them. Then, I gently stretched each resulting ring gently to enlarge the hole and placed each bagel on a sheet with oiled parchment paper for retarding.

The next day, after boiling the bagels in water with baking soda, I topped them with sesame seeds or re-hydrated onion flakes and baked them. 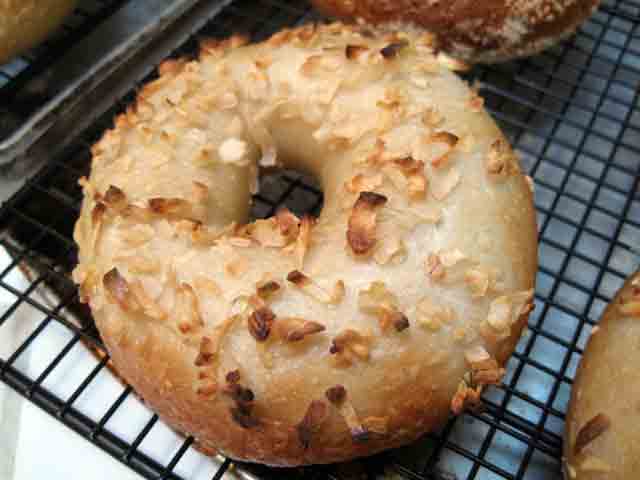 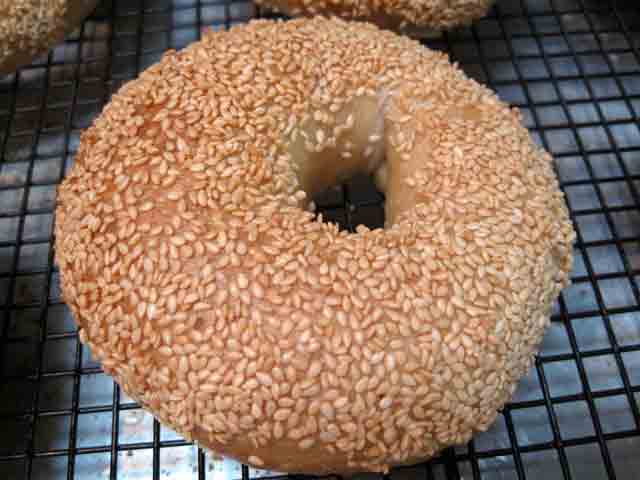 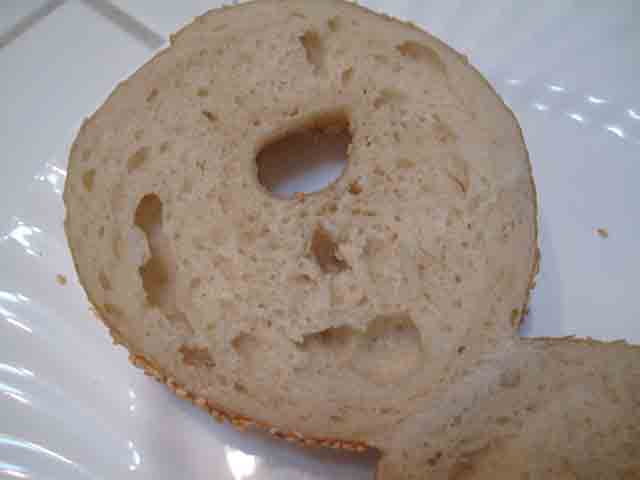 Although the crumb was very well aerated and looked "fluffy," the bagels were delightfully chewy. They had a delicious flavor plain, without any topping, and were even better with cream cheese and smoked salmon. 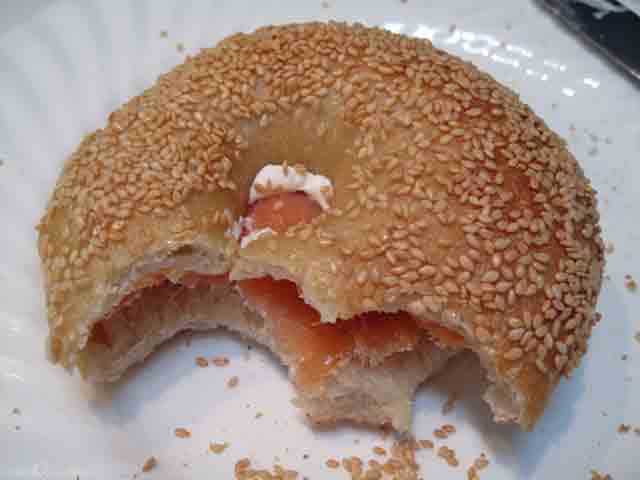 Bagel with cream cheese and lox

A Success and a Failure 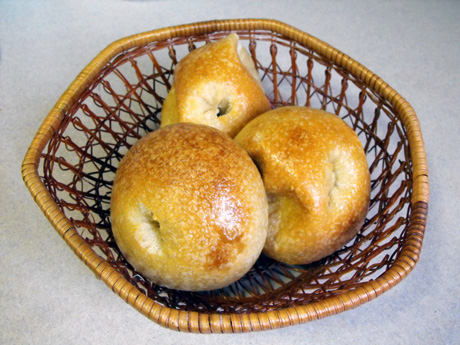 First up: the Failure.

They were completely sourdough, but something wasn't quite right. They got a bit too puffed. I'm thinking that the fact that I let the dough come back up to room temperature had something to do with that. I should've boiled straight from the fridge, then baked. It could also be that I didn't get them stretched out quite enough, either.

The taste, though? Perfect. Exactly what I want. 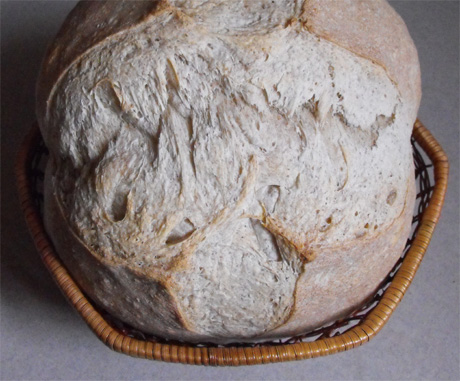 This is another basic sourdough rye. No caraway, no sugar...just flour, salt, water, and starter. No complaints. Time to get out the mustard. Or maybe the corned beef...

Just to show that I've been baking. Not neglecting my hobby this week. :)

I received a copy of "Breads From La Brea Bakery" for Christmas and today made the bagels from it. I have made bagels from other recipes 3 or 4 times before and had reasonable results. These were by far the best looking ones. I have yet to taste them but they are also the first bagels I have made using sourdough so I think they will be good.

The recipe calls for both white starter and all white flour. I always keep my starter whole wheat and also replaced half the flour with whole wheat. Otherwise, I followed the recipe. For toppings I used poppy seeds, sesame seeds, cinnamon & sugar, and a couple were left plain. 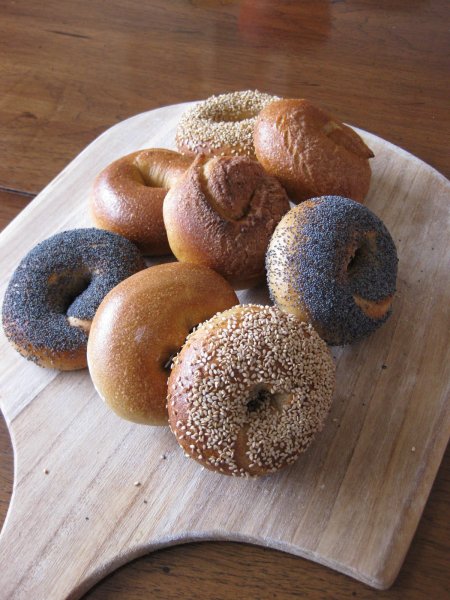 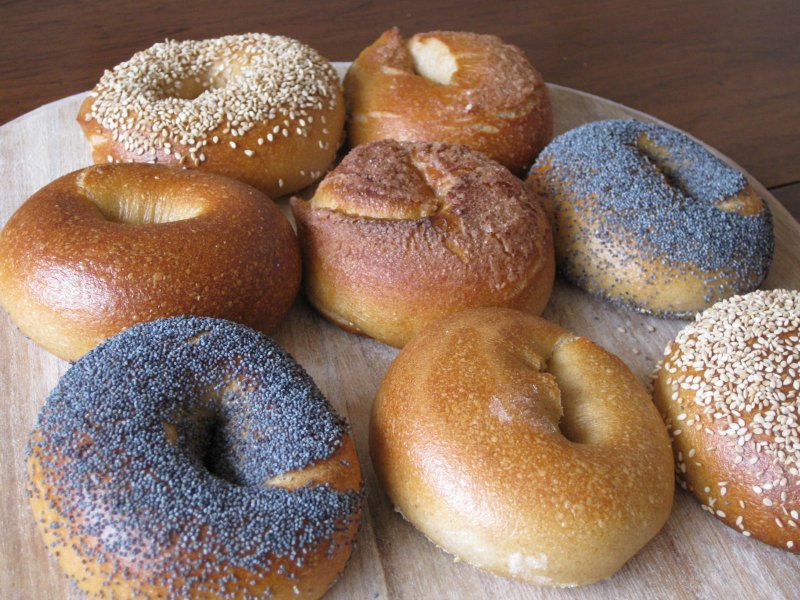 I made an overnight poolish with KA bread flour, the final dough had 1/3 whole wheat flour. It was very a very stiff dough and I kneaded by hand until I was sweating.  Boiled about a minute per side in baking soda water.  The tops are nice but the bottoms are gnarly.  I need to study the shaping instructions per Reinhart and Hammelman.  I think I'm overcompensating for my early trys where everything slumped out flat.

I have been on a quest to make bagels.  I have tried many recipes with the exception of Peter Reinhart's.  The only problem with my bagels is that, although they taste delicious, they have been turning out a bit flat.  I have checked the recipes thoroughly and believe that I am measuring all ingredients perfectly.  Any thoughts on what could be causing this.  The recipes I have used are as follows: