It was time to clear out some of the flotsam and jetsam of flour remnants.  It was  also time to unwind after several weeks of "disciplined" baking.

So, into the dough went WW bread flour, WW turkey red flour, whole white wheat flour, pumpernickel  rye, medium rye (I think), molasses and caraway seeds.  And to top it off I dug out the ancient bottle of Jaegermeister that has been lurking in the dark depths of my freezer for more years than I can remember and threw in a shot of that as well.  I seem to have reached a point in my life where actually drinking the stuff has really lost its appeal.  But, the first time I combined German breadspice and molasses in my rye bread I noticed that the sweet, herbal flavor was very similar to the black stuff in the green bottle... and also Ricola cough drops now that I think about it.  So it was only a matter of time before it ended up in the bread.  The Jaegermeister, not the cough drops.

So I doubled the recipe, threw it all together and made a big, ol' loaf of this:

And it actually turned out really tasty.

To follow-up on a previous post:  Sometimes it really is enough just to show up.

These two loaves went to the fair.  Embarassingly underproofed and really dense.  But they won their classes.  I'm pretty sure they were the only breads in their classes!!  Because I couldn't find a second place entry in either one.  There is no shame in cherry-picking!!

And more bagels!  This time with almost all KA whole white wheat flour to lighten things up a bit.  I was also able to locate the one jar of barley malt syrup in the area and make it mine.  Then underestimated the oven-spring and all the holes closed up!  But oh, what a difference in flavor

Bagels, the perfect antidote to an overdose of sticky, tempermental sourdough ryes.  They may not be the prettiest bagels to ever come out of the kettle, but YUM!  I don't know why I didn't try these sooner.  These are going to replace english muffins as my "easy, little, single-serving bread" of choice... at least for a while.  The simple fact that there is nothing sticky going on makes them a breath of fresh air.

They are 100% whole wheat, straight out of Reinhart's Whole Grain Breads.  I didn't have any barley malt syrup, so I used dark, local honey, but I will definitely be picking some up for the next batch.

I'm eager to try different additions to the boiling-water.  For this batch I used baking soda and a little molasses just for the heck of it, but that didn't seem to get me a very bagel-like crust.  Not that I'm going for any kind of serious authenticity here!  Not really in my nature to stress about that, and besides, I wouldn't know an authentic bagel if it jumped out of the oven and sang "New York, New York."

More fun this morning with...

The bottom crusts have the traditional cornmeal crust.

The loaves contain lots of caraway and Charnushka seeds.

I am trying to follow a bagel recipe and it asks for 1 tbs of "Diastic malt, either liquid or dry" and "Malt syrup, honey or sugar for boiling.

So I've scoured my local shops and I've managed to find a product called spraymalt in a brewing supplies store and malt extract from a health food shop (more detail below).

This is a bit of a tease. I can't share the recipe for these bagels, because the recipe is from a yet to be published book for which I'm one of the recipe testers. But they were so beautiful and so delicious, I just can't not at least share some photos. 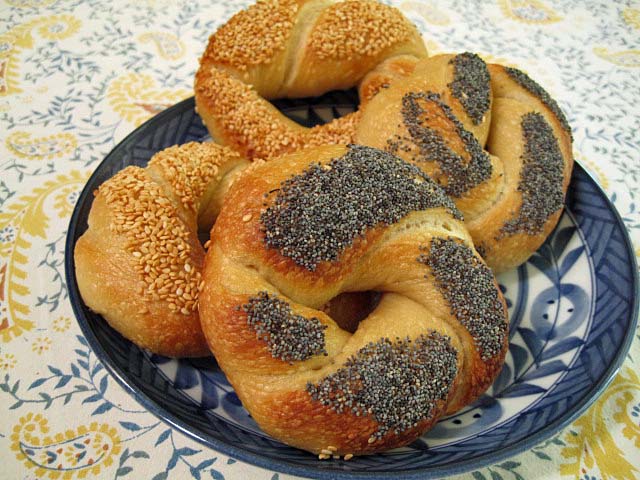 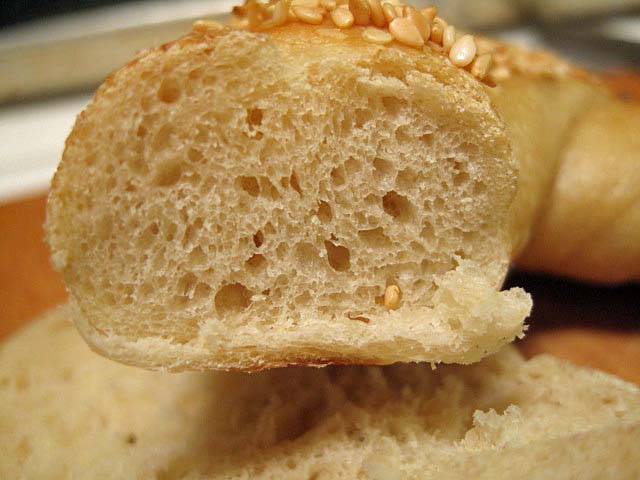 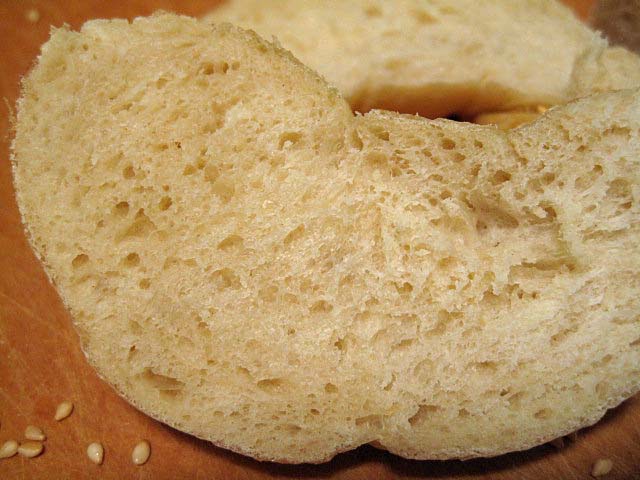 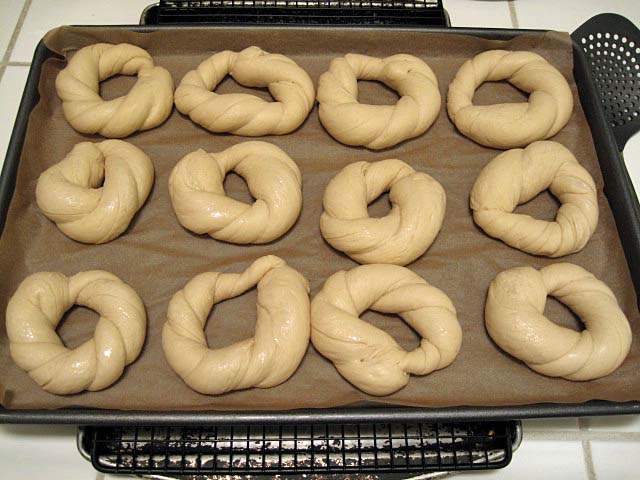 Bagels after overnight cold retardation and before boiling 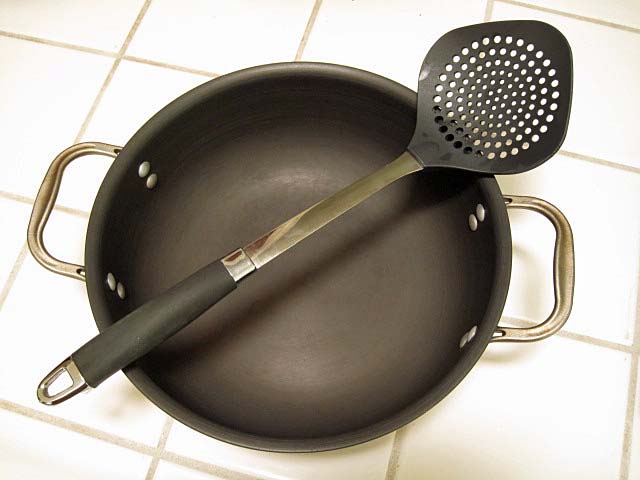 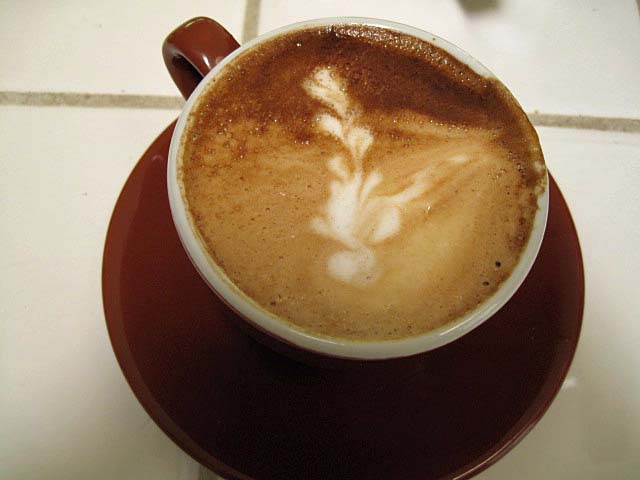 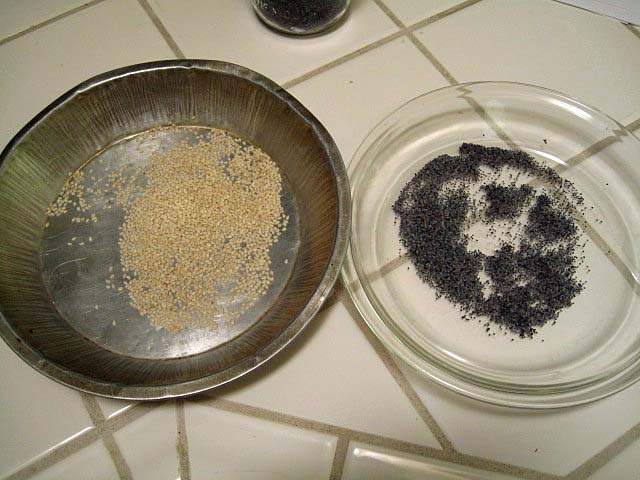 Sesame and poppy seeds for topping the bagels 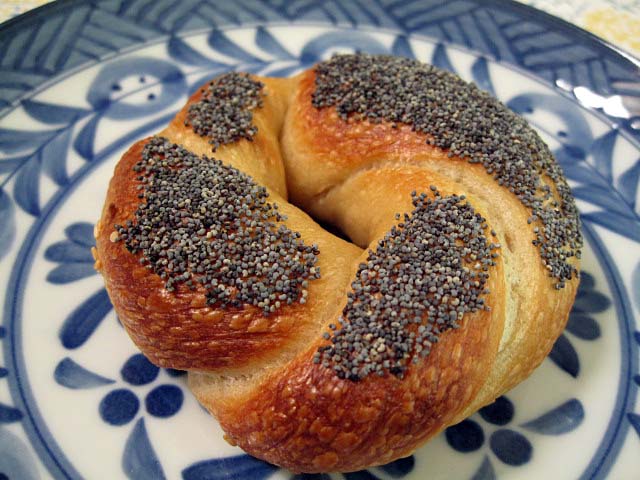 This is a real bagel!

The crust is crisp. The crumb is very chewy. The flavor is delicious. What's not to like? Guaranteed to elicit comments from bagel cognoscenti (That's Italian for "mavens.") like, "I haven't had a bagel like this since .... " (with tears in their eyes).

I apologize for not being able to share the recipe at this time. You'll just have to watch out for the book about New York Jewish bakeries and baking by Norm Berg and Stan Ginsburg when it's published.

I just posted a blog entry discussing the bagels I've been making and wanted to follow it up over here in the forums with a couple questions.

Bagels from The Bread Baker's Apprentice Back in March my wife sent me to a food blog to read about the "Best Pizza Dough Ever Recipe." In the post, Heidi Swanson gives some background to her discovery of Peter Reinhart's Neapolitano pizza dough along with an adapted version of the recipe from The Bread Baker's Apprentice. It seemed a bit detailed, but it sounded good and a few days later I gave it a go.

I'll admit I had a rough time of it. It was my first time working with wet dough—to date I'd only made some quick breads and some rather disappointing bread sticks, and this was a whole different beast. The first pizza went everywhere. The second was little better. Did I mention the smell of carbonized semolina flour? Altogether the pizzas were a mess, but they were still good enough that it showed promise, and it got me interested in checking out Reinhart's books.

Ten days later my wife surprised me with copies of The Bread Baker's Apprentice and American Pie. I switched to the AP Neapolitano dough and I've now made the pizzas 3 times. It's the best pizza I've ever had. Our favorite pizza so far is the Pizza Rosa al Bianco.

In the same time, I've been exploring a variety of bread recipes from BBA. For myself, the European style breads, and for my wife a variety of sandwich loaves. But one of the formulas has overshadowed all the others. First I made bagels for us. My entire family raved. Then I made bagels for my wife's co-workers. And then my mom wanted some for her school. I have been making between 2–3 dozen bagels per week for the last month or two. And thanks to some snooping around the forums here, my bagels have consistently gotten better with each batch. I have to admit it does feed my ego when people constantly tell me that my bagels are better than anything in town and that I should open up a shop. Most of the bagels I've had around here don't even begin to compete with these. Panera comes closest, but there are a few people insisting that these are better yet. I agree that they're good, but I'm still hunting for the perfect bagel.

In the meantime, I'm very proud of these and love making them with a couple tweaks to Mr. Reinhart's formula. The few changes I make are as follows:

I've also experimented with some different toppings. I liked the ginger, garlic, sesame bagels I turned out, but my wife wasn't a fan of the ginger zing. The favorite topping, by far, has been my adaptation of the Pizza Rosa al Bianco from American Pie. I mince the red onion—is there any reason why everyone seems to use rehydrated onion for bagels?—and chop the pistachio nuts and rosemary smaller than I would for the pizzas. It still gets a huge heap of parmigiano reggiano and gets spritzed with olive oil before going into the oven. There are still a few things I'd like to figure out. No matter what I do, the bagels don't have the texture I expect—the inside isn't quite a chewy as I think they should be, and I've tried using KA Sir Lancelot HG flour as well as boiling longer. The crust is also surprisingly soft. Chewy, yes, but shouldn't the crust have a crispness about them?

Regardless, these bagels are certainly satisfying. Everyone from my 2 year old daughter to my recently-vegan parents begs for them. And this makes me very, very happy.

I'd say this looks more like bagels.  The previous ones were a little too small.  4 oz are the right size.  I also used a homemade malt powder,  tried to sprout my own with wheat berries.  Soaked for 3-4 days.  There was a little white sprout, but somehow didn't like the ones in Dan Lepard's book on The Homemade Loaf.  But I went ahead to dry and grind it then.  I added in this ingredient, but still without malt syrup,  I substituted with brown sugar.  The colouring looks fine I guess.

The puff was much better, the taste was chewy and there's a tinge of sweetness - could it be the malt powder?  I wonder. Perhaps.

But my 2nd batch that went in didn't puff as much,  see bottom left picture,  the comparison,  the one on the right is the 2nd batch,  I suspect its the ice cold water,  most melted after the 1st batch. 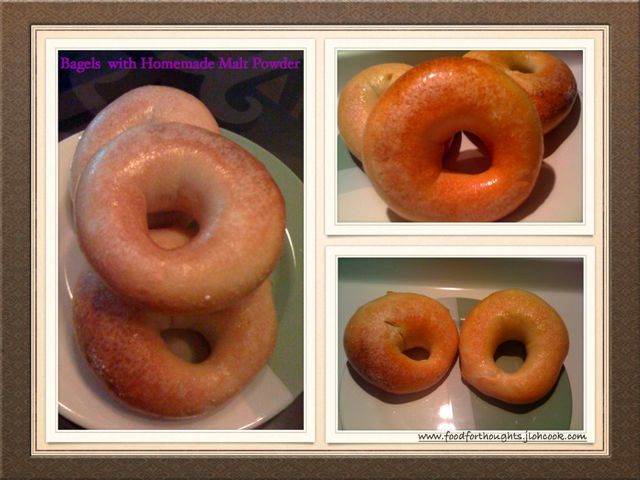 Inspired by Lindy,  here's my try on the bagels.  But obviously mine didn't turn out as nice as hers.
As I can't find high gluten flour - I used Japanese stong bread flour - 12% protein level.  Without diastatic malt powder,  i left that out.  Without malt syrup,  I used honey and brown sugar instead. Here's a description of how I did it.  see post here.
Without these key ingredients,  I guess I can't say I've made Jeffrey Hamelman's bagels.  The bagels did turn out very chewy and my son gave me a verdict of 6/10.
I'm still trying to sprout my wheat berries......to get malt powder. The next time I'm in US,  I'll make sure I get some.... 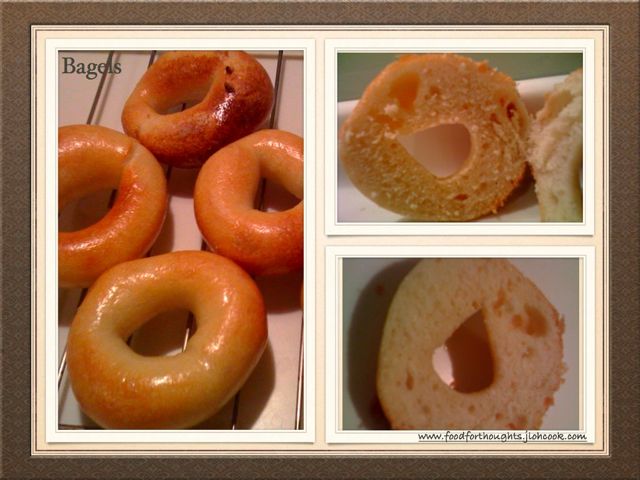 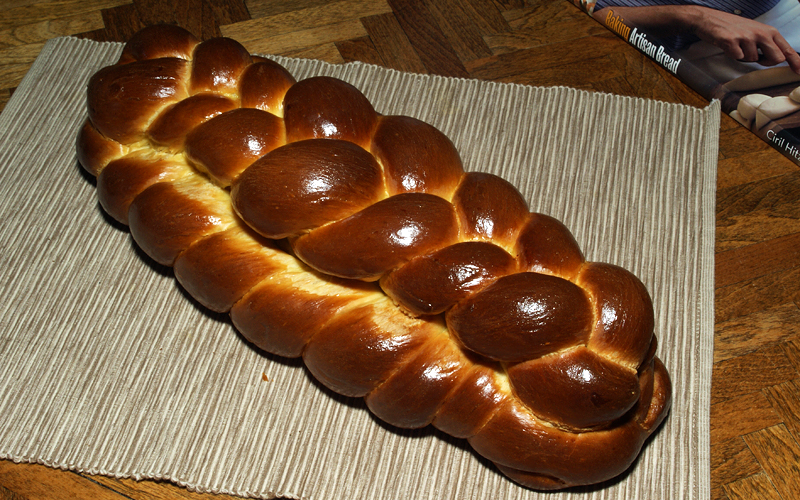 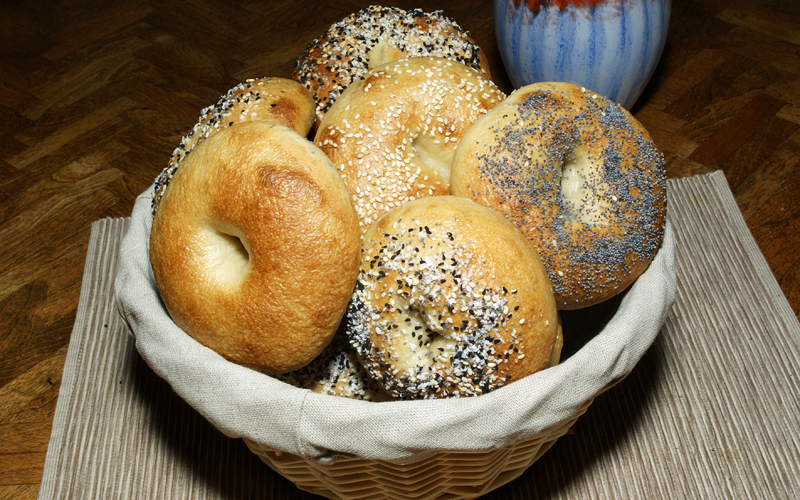 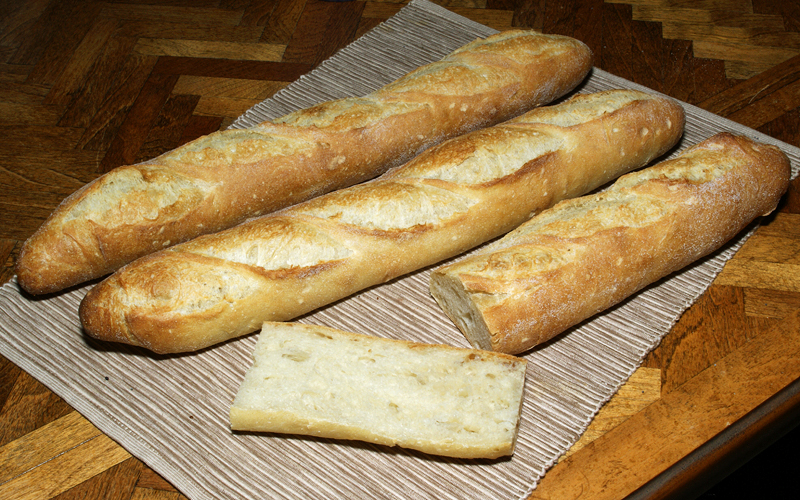